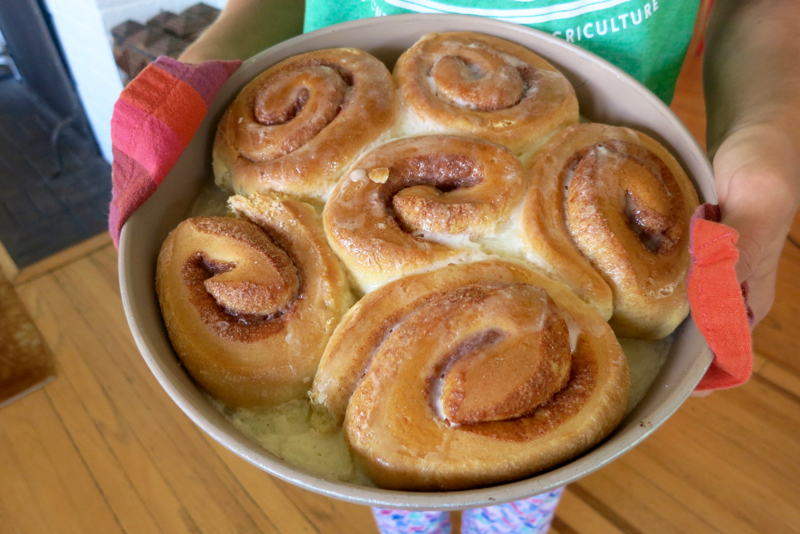 Last night was our annual trim-the-Christmas-tree-and-eat-latkes ritual. (Yours too, right?) I know we’re still over two weeks away from Hanukkah, but we’ve been merging the two holidays for so long (see: How to Celebrate Everything) that it now feels officially weird to hang angels and macaroni ornaments on the tree without snacking on latkes and their attendant fixins. Not only because crispy fried potato pancakes are irrefutably delicious, but because — in case I haven’t made this clear over the past six years of blogging — if we as parents are in the business of memory-making, we would be extremely wise to optimize tastes and smells to lock in moments like these. (I mean think about it, do memories get more happy — or more cliche — than decorating the tree, fire a-blazing in the hearth, Ella Fitzgerald — and briefly, The Ramones — piping through the speakers?) I’m pretty sure my children will be in the minority when they grow up and associate Hanukkah latkes with Christmas Tree decorating, but, hey, remember the golden rule of family rituals: It doesn’t have to make sense to anyone else.

My definitive latke recipe is in HTCE for those of you who are so inclined, but when I started thinking about more, uh, predictable tree-trimming recipes that might yield aromas capable of transporting people back to their childhoods (it’s a very specific category, I know), I landed on these frosted cinnamon buns. The first (and only) time they were baked in our house was over the summer. Abby learned how to make them in a Sur La Table cooking class, and a week later convinced her sister to bake them within an hour of her sister returning from sleepaway camp. (I have to say, watching them reconnect through a baking project was a nice little memory for mom.) It was probably 90 degrees outside, and after they finished, 90 degrees inside, but it didn’t matter because our house smelled like the world’s greatest bakery, and do I even have to ask: Is there any better smell in the world?

Anyway, if you are trimming the tree one morning this weekend or next, and looking for a food ritual to attach to the fun, start this year. Right here.

Frosted Cinnamon Buns
This recipe was in the packet sent home from my daughter’s Sur La Table Cooking Class, which, by the way, she enjoyed very much. (#notsponsored!) Yield: 2 dozen large rolls + untold number of happy holiday memories.

To make the dough: In the bowl of a stand mixer fitted with a whisk attachment, combine 3 cups of the flour, sugar, salt, and undissolved yeast in a large mixing bowl.

In a medium saucepan, heat the milk, water, and butter over medium heat to 130°F on an instant-read thermometer. Add the liquid ingredients to the flour mixture, along with the eggs. On low speed, beat for 2 minutes; the mixture will be soupy.

Replace the paddle attachment with the dough hook on the stand mixer. With the mixer on low speed, gradually beat in enough of the remaining flour to make a soft dough and stop. In the winter, under less humid conditions, you may not need all the flour; in the summer, or when it’s humid, you’ll probably use all of it.

To make the filling: Whisk together the sugar and cinnamon. Set aside.

Divide the dough in half. Working with one piece at a time, roll the dough into a 10-by-15-inch rectangle. The dough is soft, and should handle easily. Spread with half the softened butter (2 tablespoons). Sprinkle with half the cinnamon-sugar.

Starting with a long side, gently roll the dough into a log, pinching the edge to seal as well as you can. Cut the log into 12 pieces, and space the pieces in the prepared pan. Repeat with the remaining dough and filling.

Cover the pans and let the rolls rise until they’re nearly doubled, about an hour. Toward the end of the rising time, preheat the oven to 350°F.

Bake the rolls for 25 to 30 minutes, until they’re golden brown. Remove them from the oven, and cool them for at least 20 minutes before frosting.

To make the frosting: Combine the frosting ingredients using enough milk to make a soft, spreadable frosting. Spread the frosting on the rolls. Serve immediately; or cover loosely, and serve later. Store well-wrapped at room temperature for several days, or freeze for longer storage.

Hahaha love the merging! We are mixed house too but our daughter is only 1 so we are just starting to figure out how we want to celebrate as a family. So many adventures – definitely involving good smells – ahead!

Just a PSA: the first night of hanukkah is christmas eve. we are throwing a latke party (with brisket, natch), then tossing everyone out to stuff stockings and get to bed before santa catches us! cheers!

A ritual from my growing-up-years–we’d make a pan of cinnamon buns on Christmas Eve (or even Dec. 23), cover them with oil/butter and plastic wrap, and leave them in the refrigerator so we could bake them up fresh on Christmas morning. (They rise in the fridge.) Agreed that the aroma still brings me back to those happy days.

My mom used to make her mother’s noodle kugel every year for Easter!

Yum! Also, thought you might appreciate this article from the Nov. 2016 issue of Scientific American – https://www.scientificamerican.com/article/family-traditions-boost-happiness/

@Janie, thank you so much for sharing this! I hadn’t seen it yet but now I intend to share far and wide. Always send things like this to me, always! THANK YOU!

One of our newer traditions is candy cane ice cream for Xmas dessert . While the adults make Christmas dinner, the kids collect candy canes off the tree, stick them in a ziploc bag, and smash them up. These bits get mixed in to store bought vanilla or chocolate ice cream that has sat out and softened a bit, then it gets shoved back in the freezer. It’s specially seasonal, fun for the kids to make, easy-peasy, and does not require stove or oven space. One of my goals is traditions that are fun and not stressful and this had been a winner.

I love that Allison — and my daughters would, too. They are peppermint obsessed. Thanks for sharing.