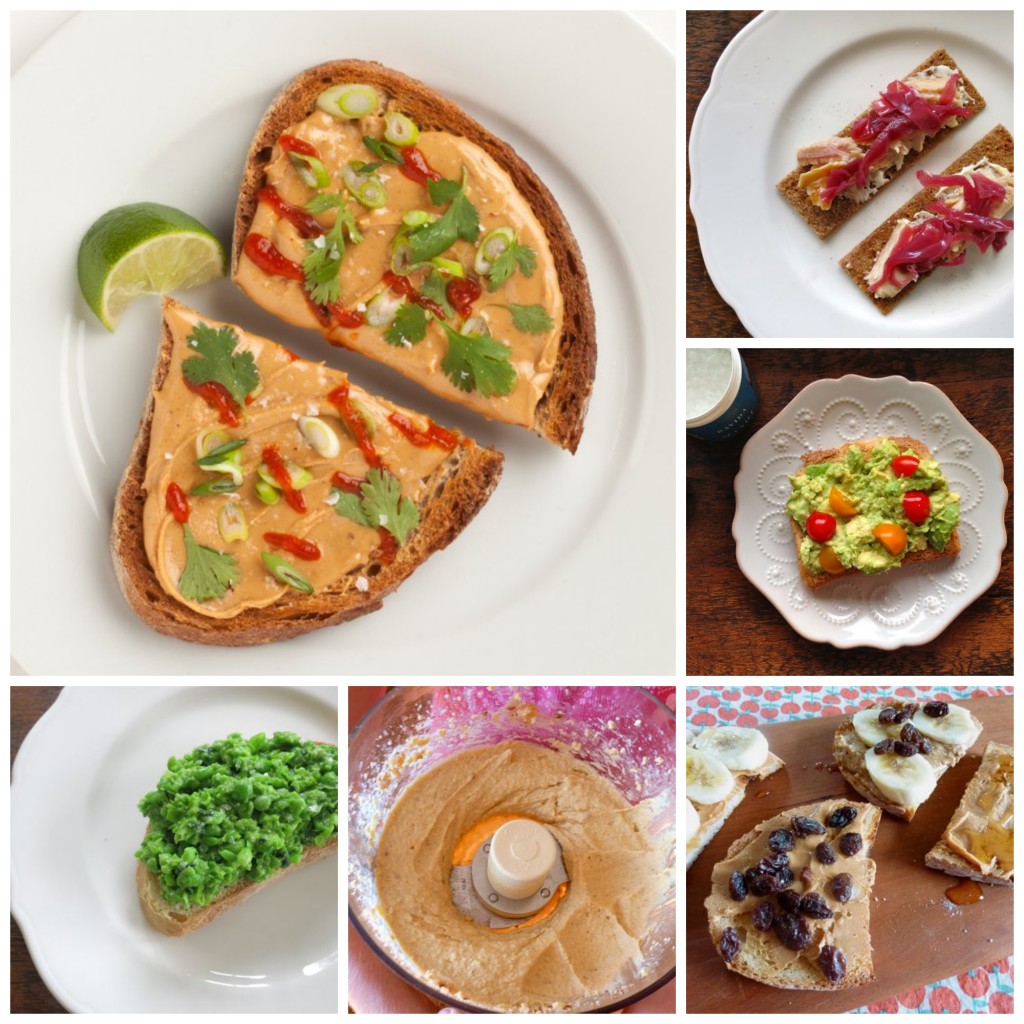 Toasts might be all the rage right now in cities across America (in my world it begins and ends with the salted butter and anchovy tartinette at Buvette, thanks for asking) but I can say with confidence that I’m pretty sure the whole trend actually originated in my house last spring. Yes, it’s true! For skeptics out there, I can even pinpoint the month — it was April 2013, a full month into a jam-packed spring sports schedule when practices and games began taking place exactly during the hours when we’d normally be eating dinner. I’ve weighed in with many dinner ideas for dealing with this decidedly happy problem, but after my most recent, two readers asked an excellent question that I have never addressed, namely: “Any ideas on snacks/tie- overs so [the kids] have enough energy to make through sports until the late dinner is ready?” (Thanks Melissa and Cynthia!)

The answer, Things on Toast!

Because they are not quite a snack and not quite a meal, we have lately taken to calling these toasts “sneals.” (You heard it here first!) Sneals tend to be healthy but substantial, usually vegetarian, but not always, and are generally consumed between 5:00 and 6:00. Anything after 6:00 is officially dinner. Anything before 5:00 is officially snack.

A few sneals that you might consider if you don’t think your athlete will be begging for anchovies at 5:00 on a weeknight (or, um, ever):

Avocado on Toast: Smash up a half an avocado with salt and a squeeze of lime. Spread on crusty bread and stud with grape tomatoes; Hummus on Pita: Sometimes we have homemade lying around, but that is beyond the call of duty. Hummus on Trader Joe’s whole wheat naan is Phoebe’s favorite. Add some greens and feta, and that’s my favorite; Minty Peas: Whirl a handful of thawed frozen peas with Parmesan, olive oil, mint, salt and lemon juice (note: also makes a good breakfast, I just ate the one you see on the bottom left, which I made specifically to shoot for this post); Smoked Trout and Pickled Anything: You could go crusty bread for this or you could just take two Finn Crisps, smear with a thin layer of mayo, and top with smoked trout (I get this at TJoes) and pickled cabbage (Note: MVP of my weekday lunch rotation); Peanut Butter: With bananas, with raisins, drizzled with honey, and even, to hear Bon Appetit tell it, with Sriracha. Photo on top left by Danny Kim.)

Ha! Toast really is the hot thing. I do love when trendy things are what I’m already doing and easy too. I need to try the minty peas idea. http://girlnamedallyn.wordpress.com/2014/05/26/egg-and-avocado-toast/

The minty peas have been a staple at my house since you first published them on this website. On toasts, stuffed in dumplings, on sandwiches, as salad dressing, dip for vegetables…it’s my favorite thing, and everyone always asks for it.

Hi i am kavin, its my first occasion to commenting anyplace,
when i read this article i thought i could also make comment due to this sensible post.

I just learned a new word: sneal. Love it! And you can’t go wrong with putting avocado on anything, but somehow I have never put it on toast…! (?)

avocado toast is also wonderful topped with feta. i am obsessed.

Avocado smooshed up with some goat cheese or feta, on sourdough, and topped with tomatoes and olive oil is totally my go-to breakfast, snack, lunch, or solo dinner. I’m intrigued by this peanut butter and sriracha business; my husband sometimes makes himself a breakfast of peanut butter toast and some fried eggs topped with sriracha… so maybe there’s something to that. It always just looks weird to me!

I think I’ve commented before, but seriously, you crack me up! I just read your lunch contract and lost it. And, I keep wanting to quit my job, but if I can figure out how in the heck to keep my sense of humor about it all, like you somehow have, I’ll keep on keeping on until I too am packing lunches and making pre-game sneals! 😉

The sneal – love it! Sounds like something straight out of a Dr. Suess book.

Have you tried middle-eastern Labne (kefir cheese) on toast with tomatoes, baby kale or spinach, olive oil, coarse salt? Heaven. Or anything with Labne, for that matter. I buy it at a local Indian foods market.

Read this, then clicked over to this – it really is a trend:

I love this! We call this a heavy snack, but I like the term sneal so much more.

Love the idea of calling it a sneal! My current favorite is to eat a few crackers with cashew butter when I get home from work, to tide myself over until I can get all the pre-dinner chores done and then sit down to my actual meal!

The sneal! Toast +! I knew you were genius and so happy to hear that scholar/athletes everywhere now have a great tip to fuel their sports schedules! Thank you.

I must try these! My husband gets home ravenous as a teenage football player at 5 and we never have good snacks on hand.

Jenny, I had the most delicious meal at Buvette, of course starting with the anchovy and butter tartinette! And what was I reading, you ask? A Homemade Life. How did I come to those fantastic decisions?? Your blog! Thank you!!

I love this! As a mom to a 1 year old and a 5 year old who don’t sleep, I feel like I need a Sneal at 3 am! Thank you, Jenny, for keeping me inspired and sane. I need the pea dip (it’s soooo good)!