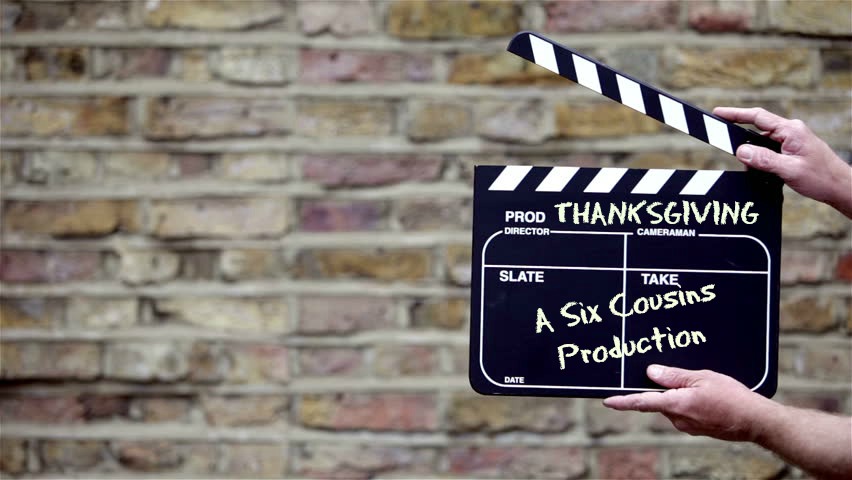 Those of you who have read How to Celebrate Everything know that our rituals go into overdrive this time of year. One of my favorites (probably because I have nothing to do with it) is the play that my girls and their four cousins perform for the grown-ups as soon as we wrap up our Thanksgiving feast. They’ve been doing it for as long as I can remember, and today, as part of my ongoing Family Ritual Series, I’m pleased to introduce my daughter and aspiring director, Abby, 13, who will tell you all about it.

The moment we arrive at my cousins’ house in Long Island, my sister and I go straight to the living room, where we start planning the play with my four cousins, Alison, Amanda, Owen, and Nathan. We brainstorm, then go right into writing a script and talking about choreography. We don’t have a lot of time. By the next night, the script will have to be a polished play that all of the parents will watch after eating Thanksgiving dinner.

Ever since we were small, it’s been a tradition for all six of the cousins on my mom’s side to do this — for both Thanksgiving and the Fourth of July, which are the two times we are guaranteed to all be together. The plays are usually about the holiday, but with a fun twist. For instance, one year on Thanksgiving, we each played a menu item, and had a name. I was Sally the Stuffing, Alison was Tara the Turkey, Owen was Marvin the Mashed Potatoes. My sister usually plays the narrator and introduces all the characters. Before a performance, you’d think we might get nervous, but the audience is pretty easy-going, and don’t care in the slightest bit if someone messes up. I must admit though, for a group of kids with only a single day of practicing, our play always turns out well. And after a giant meal, I think it probably feels good for the parents to be able to sit in big couches in front of a raging fire and laugh at us. Especially since they are tired from all of the preparing and cooking.

It’s not always easy. The day of “Opening Night” is stressful. Some cousins want to make the show amazing and rehearse all day. Others aren’t worried and spend most of the day running around or playing soccer. Sometimes, I have to call a morning meeting to discuss rehearsal times, because you can never count on everyone to willingly show up. Every year, there is an argument about rehearsal, but everyone makes up after dinner, when it’s showtime.

My dad plays an important role in this ritual. I want to say since the beginning, he is assigned a small, random role in our play. For example, two years ago for our Fourth of July play, my cousins and I all played the colors, red, white and blue. My dad played the word “and”, and was complaining about being excluded throughout the whole performance. (The role was so popular it was later performed by my cousin Owen.) For the Thanksgiving skit mentioned above, my dad played the supermarket owner, selling us to the buyers in a really dramatic Southern accent. Our plays are usually funny, but having an adult play someone who doesn’t quite fit in, is hilarious.

When the play is over, and the parents clap and we take a group bow, all the arguments and confusion will be forgotten. There is nothing more fun when you’re with your family, doing something that you have done for years, that everyone enjoys. We always laugh about our plays. Each year they get better, and even though my cousins sometimes pretend not to want to do them (you know who you are, cousins!) I know we will continue this tradition for a long time.

This sounds like the best holiday ritual! Hope we get to hear about how this year’s goes!

What an AWESOME tradition. Abby, you are a great writer! Thanks for sharing.

Cousin memories are the best! Bonus if they include talking Thanksgiving entrees.

Make Owen reprise his role as Marvin the Mashed Potatoes every year.

Yay, Abby! It is so fun to read a post from you here! Thanks for sharing this ritual. I hope we get to hear what this year’s play was about after the holiday.