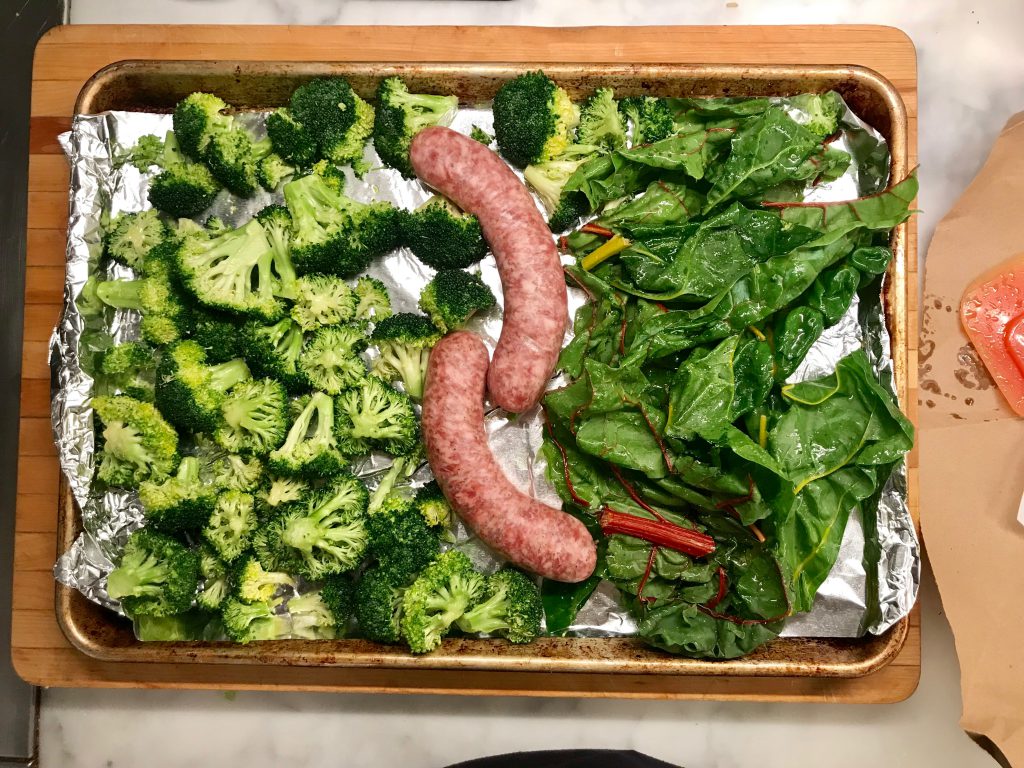 So like a lot of you guys out there, we’ve cut back on meat in our house pretty significantly in the last few years, which probably seems pretty obvious to anyone reading this blog with regularity. For the most part, it’s been a gradual process, one that has been helped along by the ever-growing body of research on the environmental impact of a meat-dependent world; and also by getting older, making me way more in touch with idea of Controlling the Controllable if you know what I mean. Another major factor? The steady stream of vegetable-forward cookbooks landing on my desk (in my capacity as a reviewer). What’s so inspiring about all of them is that so few call themselves full-on vegetarian — they just reflect the way a lot of us aspire to eat, i.e. they are cookbook versions of the famous Michael Pollan prescription: “Eat food, not too much, mostly plants.” Take Cal Peternell’s most recent collection, Almonds, Anchovies, and Pancetta. The subtitle encapsulates my current eating life perfectly: A Vegetarian Cookbook, Kind Of.

I say “kind of” because there’s literally zero chance we’d ever make it through a winter without multiple helpings of Pork Ragu. Or though a week without chucking our no-brainer mustardy-panko chicken thighs in the oven. Or through a diner breakfast without ordering bacon alongside our eggs. But in the past few months, we’ve decided to enact an official policy about meat-eating, similar to our drinking policy that has been such a surprising success. In other words, we are weekday vegetarians. We do our best to avoid meat during the week, then allow ourselves submit to the inevitable Shake Shack craving on a Saturday or Sunday…ok fine, Friday counts too….if the situation calls for it. (Let me just say, the situation somehow always calls for it.) As always, it’s been great for my cooking, forcing me out of my comfort zone (you can only eat so many salad pizzas and black bean burritos in a month) and far away from the mindset of meat-starch-veg when conceptualizing a meal. I’ve been stockpiling my new recipes, and promise to post them as soon as everyone is out of the holiday hedonism frame of mind!

Of course there is one problem with the whole enterprise. Two problems actually: Our daughters. They’re not exactly complaining — in fact, we didn’t tell them we were doing this and it took almost three weeks before Abby said “I feel like we haven’t eaten chicken in a while” — but one kid doesn’t eat beans, one doesn’t eat grains or quinoa, one doesn’t eat pasta, neither of them eat eggs. Suddenly the horizon didn’t seem so vast and here I am, back in the toddler world of relying on a handful of meals that everyone eats unless I want to cook three different meals for four people. I miss a lot of things about the toddler days, but being a short order cook is not one of them.

So while I figure things out, I’ve decided to share two super easy vegetarian mains that are easily tweak-able for the meat-eaters at the table, and that allow me to cook one thing for everyone. (OMG Remember Deconstructed Dinners?) I don’t see them winning any James Beard Awards, but they should do the job for a weeknight family dinner, which should win some award somewhere for someone.

Pasta with Sheet Pan Broccoli, Greens, and Optional Sausage (above)
Mom and Dad ate the pasta with vegetables. Phoebe, who doesn’t like pasta, got one sausage and a huge helping of vegetables. Abby got the whole shebang.

1 large bunch broccoli, chopped into florets
handful greens (I used chard, you could also use kale or spinach)
3 tablespoons olive oil
kosher salt and freshly ground pepper to taste
shake of red pepper flakes
2 links sweet Italian sausage (or as many links as you have meat-eaters at the table)
1 pound penne
1 tablespoon butter
1/2 cup shredded Parmagiano-Reggiano
handful mozzarella if you have it (I happened to have a little knob of the fresh stuff and I didn’t want it to go to waste; but this is not a deal breaker ingredient)

Heat oven to 425°F. In a large bowl, toss broccoli, greens, oil, salt, red pepper flakes and salt and pepper to taste until every floret is covered with oil. Dump onto  a foil-lined cookie sheet, spreading everything out. Nestle two sausages into the middle of the vegetables. Roast for 15-20 minutes, until sausages are cooked through and greens have wilted. (Test sausage to make sure they are done; if they are not, add back on a piece of foil.)

While sausage and vegetables roast, prepare penne according to package directions, using a large pot. Drain and toss immediately with butter, then add back to the pot. Toss cooked vegetables to the pasta along with Parm and mozzarella if using. Slice sausages separately. Toss pasta into four bowls, topping the carnivore bowls with sliced sausages. 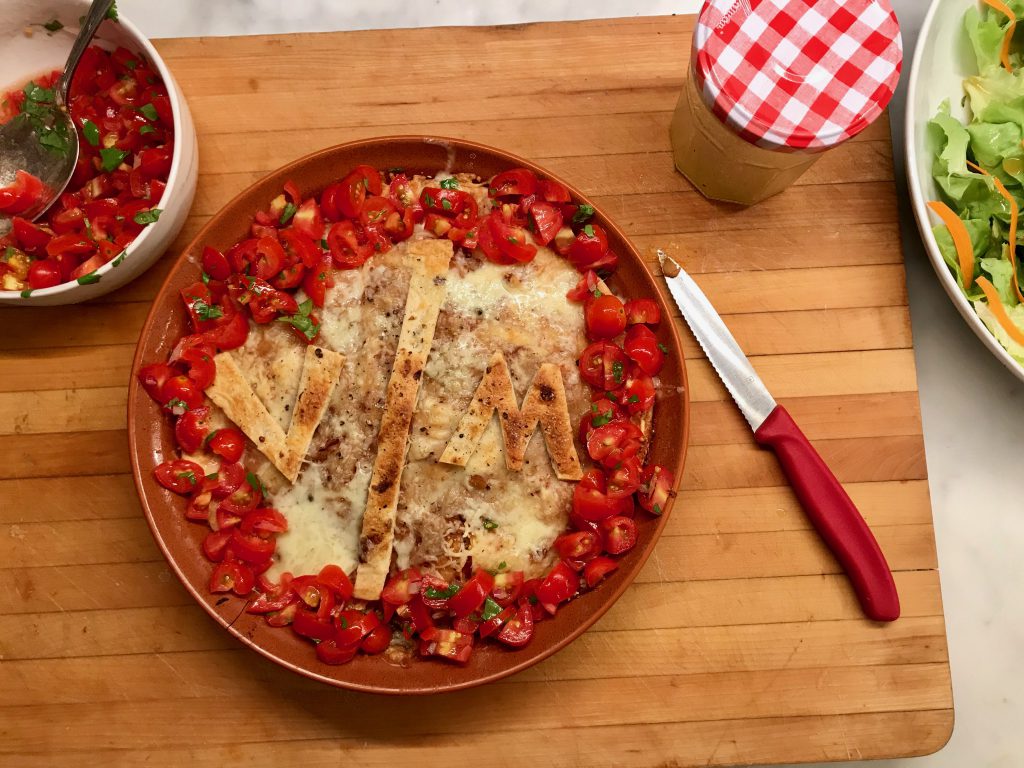 Tortilla Pie with Beans and Optional Pork
“You’ve got to be kidding me,” Abby said when she saw the meat-veg line of demarcation.

Heat oven to 400°F. Alternate layers of tortillas, cheddar, scallions, jalapeños, corn, and refried beans (you’ll want to spread the beans as opposed to dolloping them), cutting tortillas into pieces that work with the shape of the pie dish. On one side of the pie, add pork/chicken/sausage as you go, too, keeping track of the side that is meat-friendly. For the final layer, add a tortilla and a handful of cheese, then demarcate the meat-side with a strip of tortilla and an “M” monogram as shown.  Bake 25 minutes. Cut into slices and garnish with toppings. I served with a simple green salad.

Oy, this is my life right now with my 5 and 7yos. None of us eat meat, but we have picky-limits on eggs, dairy, quinoa, pasta sauce and beans.

Keep these coming! Quasi-deconstructed is my jam

Love this. Our family is taking a similar trajectory – with similar challenges. We’re taking the big leap and trying to be vegan-ish. Could you include a couple of vegan or vegan optional recipes next time?

Thank you!! Please keep sharing as you continue this “vegetarian” journey. My husband and I are in a similar situation, trying to be more health conscience with meat, while feeding three hungry teenagers, one who won’t eat pasta or most grains. The greens and sausage was perfect for us.
Thanks again! We love your cookbooks and your blog! And my husband is a DBT fan as well 🙂
Good luck!

This is perfect! My household is also split, half trying to eat vegan as often as possible, and half enjoying animal products. I would love more recipes like this that are easily made for both groups.

This is absolutely what I’m looking for (and having a really hard tim with) right now. I can’t wait for the January roll out!

Some quick thoughts: (1) Rotisserie chickens could be helpful to have on hand–many meals could be topped with some shredded chicken for those so inclined (use your imaginations); (2) I prefer my hummous straight up, or maybe topped with pine nuts (or just mint and olive oil!), but I’ve traveled plenty of places between Turkey and Tunisia where it’s topped with seasoned meat (ground or in chunks)–that would be an easy way to please some “must-eat-meat” types; (3) the grill is of course terrific here, as it’s easy to assemble a spread with various options; (4) something like a spiral-cut ham over a weekend would leave plenty of leftover meat for the meat-eaters to incorporate into meals over the course of the week (and I hope your regimen would allow you to use that ham bone for some split pea soup); (5) ditto a small turkey–enough for the family on a Sunday, chopped/sliced into meals for the carnivorous during the week (6) homemade pizzas–some portions topped with prosciutto, others not. I don’t have kids ; I’m not a vegetarian, but I don’t like meat, so I rarely prepare it; at this point, most of our meals are either vegan (not on purpose–I just don’t like heavy dairy at night) or else include fish (but I worry about sustainability etc.). Good luck with it all!

Oh my gosh, I was literally spinning over this VERY quandary when I saw the title of this post in my Feedly. You see, my husband has recently turned vegetarian and my family is…Midwestern. We’re going home for Christmas, and meals back home are always centered around meat, even more so since my sister was diagnosed with type 1 diabetes and eats a low carb diet. I do the cooking when I go home, so you’ve literally laid out a game plan for me. THANK YOU!!!

Hi, any vegetarian cookbooks you’d recommend for a young vegetarian grad-school couple living on a grad school budget? Thanks!

If you like Indian food (which I love), Meera Shoba’s “Fresh India” is great, and most recipes are fairly budget friendly (I always use it when I’m having people over for dinner, a lot of the ingredients can be bought canned/frozen/in bulk)

Hardly haute-gourmet, but endlessly helpful (and budget-oriented, both in terms of time &$)… Moosewood Restaurant Cooks At Home

One of my favorite veg cookbooks is Peace and Parsnips. It’s just so unique and different from the typical recipes you see. But lately, I’ve been completely obsessed with 15 minute vegan Comfort Food. The recipes take longer than 15 minutes, but they are simple, fuss-free with easily available ingredients and stuff you actually want to eat. Also lots of great entertaining suggestions. I’m not one to actually follow recipes but I’ve made the mushrooms bourguignon about four times in the two months i’ve Owned the book. Can’t recommend it enough!

Hi, Elizabeth! My favorite thing to do (in addition to reading excellent blogs such as this) is check out cookbooks from the library. A couple of good vegetarian ones I’ve enjoyed recently are The First Mess Cookbook by Laura Wright (who has a blog of the same name) and Eat Clean Live Well by Terry Walters. Hope you find some good ones!

I would recommend Quick Vegetarian Pleasures by Jeanne Lemlin. It’s kind of old, but a real classic. Solid, easy to make dishes – I lived on meals out of this book for years during grad school & still turn back to it regularly!

I think it’s so awesome that you guys are making such a noticeable effort to cut back on your meat consumption, and even better that you’re using your platform here to talk about it – hope it encourages even more folks to follow suit! Woohoo!

Oh my, I so wish I could go meatless during the week, but it is hard enough finding meals that will both please my husband and daughter on a weekly basis. They are by far the pickiest eaters ever! My husband doesn’t like most veggies, and same with my daughter. Me on the other hand LOVE food! So, I end up putting all the veggies in a blender until unrecognizable (especially the ones, they swear they hate), then mix it into a sauce or hide it somehow. Most of the time they have no idea that they’re eating veggies, and I get sweet revenge for the torture they put me through 😉