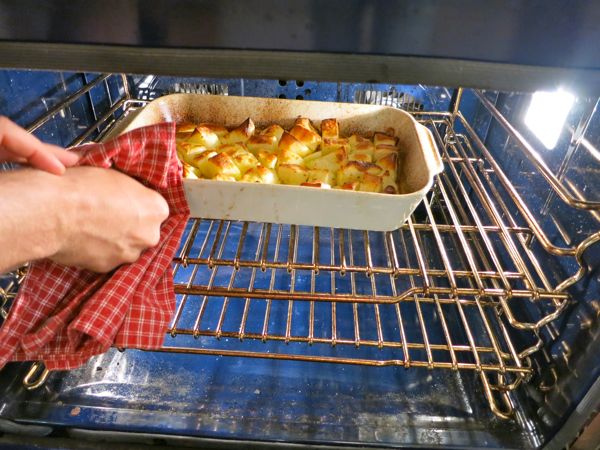 When Jenny and I were in our mid-twenties, we both had jobs in publishing – she at Real Simple, me at Esquire – and worked a few blocks apart, in midtown Manhattan. Sounds pretty glamorous, doesn’t it? It wasn’t, not really. But it was fun. For Jenny, who had spent two decidedly unfulfilling years, post-college, at a financial consulting firm in suburban Connecticut, it was a chance to flex those creative muscles, to unleash that side of her that can make a dollhouse out of a pile of clip-art and a cabinet door. For me, it was a chance to work with a bunch of writers I’d long admired and, in the process, come to understand just how little I really understood about writing. Work-wise, everything felt new and different back then, if that makes sense; when each day presents you with something you’ve never done before, you are constantly learning and constantly being challenged and, as a result, constantly feeling like a screaming fraud on the cusp of being found out. This was both motivating and, in hindsight, good for the soul. I can remember telling an older co-worker and mentor, when he asked me how I was holding up during a particularly tough week — one with a lot of late nights — that I was doing GREAT, thank you for asking. I told him, with total sincerity, that in the two years I had been at Esquire, there had not been a single morning when I dreaded coming to work! And I remember the look on his face when I said it, too: a kind of tight smile that said, Ahhh, yes. I remember being twenty-five and naive once, as well, my son. And I am smiling somewhat inscrutably like this right now because it is the only way I can keep myself from informing you that there will come a day when the prospect of editing your 43rd “Women We Love” cover package will make getting out of bed in the morning seem very, very hard.

But in the meantime, Jenny and I were happy just living in the moment. We had no kids yet, no mortgage, no boxes of baby pictures accumulating in the basement, no ballet shoes, lacrosse sticks, soccer bags, emergency granola bar stashes, or Taylor Swift CDs rattling around in the back of our car. (Actually, we didn’t have a car.) Working in the same business, and the same neighborhood, we had so much to talk and commiserate about. (I’d always send her a list of possible titles for a story I was working on before running them by my boss, for example; she was my insurance against public humiliation.) Every couple of weeks, we’d meet for lunch – usually at the local Au Bon Pain or the dreary, sneeze-guarded salad bar at the deli on 54th Street – but once in a while, we’d splurge and walk over to Uncle Nick’s on 9th Avenue. Uncle Nick’s was a cramped and busy Greek place with exposed brick and a sweaty, open kitchen populated by people who yelled a lot. It had too many tables, chairs so heavy you could barely push them back, and excellent souvlaki. An Uncle Nick’s lunch was what I call a “day-ender” – absurd portions of food that is simultaneously so flavorful that you can’t stop eating it and so filling that you immediately resign yourself, upon eating it, to an afternoon spent mourning the decisions you have made in life, and yearning for sleep. We’d get the tzatziki and a salad with blocks of fresh feta, a kebab or souvlaki platter, a side of Greek potatoes and, of course, rice pudding. None of it was what I would call light, but it was the potatoes that dealt the most crushing, and pleasurable, blow. They were roasted, but not crispy, oily but not greasy, crack-like in their addictive qualities.

I haven’t been to Uncle Nick’s in ten years, easy. I don’t even know if it’s still there, and am too lazy at the moment to google it. But in our house, at least, it lives on: I made Greek potatoes to go with a leg of lamb we’d grilled on Jenny’s birthday last weekend and boy, did it ever take us back. There it was, exactly. That fantastic texture, that deep yellow color, those hints of lemon and oregano. Damn! And oddly, given my sappy tendencies, the only thought after eating them was not, Wow, where did all the time go? It was, Why the heck do we ever eat potatoes any other way? — Andy

Preheat oven to 500°F. Place cut, peeled potatoes into a baking dish large enough for each potato to rest on the bottom. In a bowl (I used a large measuring cup), combine water, olive oil, garlic lemon juice, oregano, and salt and pepper. Mix and pour over potatoes. Cook for 45-50 minutes, or until potatoes are slightly brown on the edged and most of the olive oil has been absorbed. Finish with some sea salt. 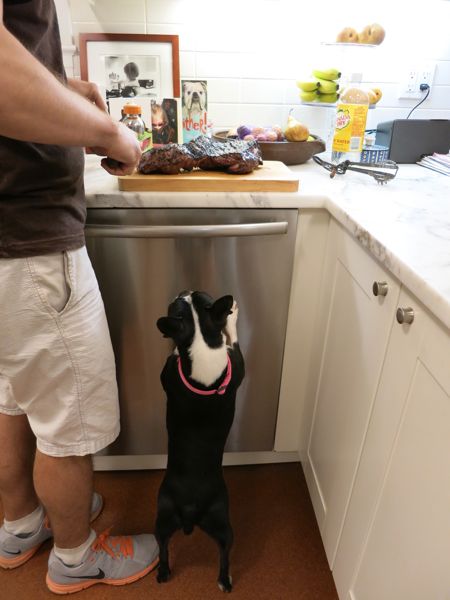 The main course: a leg of lamb, grilled for about 15 minutes, until medium rare. 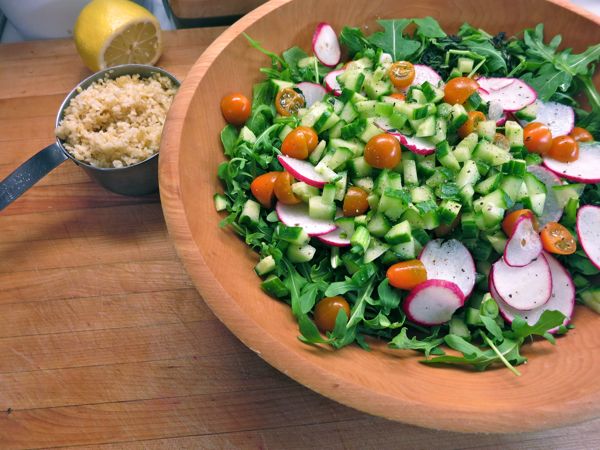 Side #2: Arugula salad with radishes, tomatoes, cucumbers, scallions, and mint. (We added the bulghur later, after we’d served the kids. Kids no like bulghur.)

Man, I love places like that. And leg of lamb and roasted potatoes? One of my all time favorites!

We had lamb yesterday. Greekish too, as my hub stuck a few pittas in the toaster and made a minty yogurty cucumber sauce to go with it. Washing up was fun (soooo much fat from the lamb) but worth it. I’m going to try these spuds this week, thanks, they sound delicious!

Would Yukon Golds work instead of Russets for the potatoes?

yes Uncle Nick’s is still there! yes, the chairs are still heavy, it is still crowded and loud. I thought it was overpriced and just okay. my foodie son LOVED it and finished every morsel. He could have eaten more – portions were not that large. we didn’t eat potatoes. must try recipe!

I’m always looking for a new fun spin on potatoes – my go to is roasting with olive oil, sea salt, and rosemary. These look delicious – I love lemon!

“Kids no like bulghur.” — If your kids DO like arugula. radishes, scallions and mint … then you have some great kids … no mind to the bulghur!

The pototoes look wonderful and sound delicous and the recipe goes on my list, but my favorite part of this post is your sweet dog “helping”!

Love Uncle Nick’s. Recently had a rollicking dinner there with a bunch of college friends and their kids. The flaming cheese appetizer was a big hit.

Greek potatoes are delicious! I’ve never been able to recreate them quite as well as my favorite restaurant serves, so I’ll be trying your recipe this week to see if it does the trick! My mouth is watering thinking of those lemony potatoes! 3 year old daughter hates mashed potatoes (not as difficult to handle as a pasta or egg hater, but a little annoying)…maybe these will go over better with her!

Your dog is just the perfect size, isn’t she? Can’t quite reach that yummy deliciousness up on the counter!!

I love food stories like this. Its why I read blogs! I loved this one! Thanks for the recipe!

I have a deep love for Greek potatoes!

I’m making this tonight, thanks Andy! Not sure how Australian desire potatoes compare to the ones you used here but I’ll find out soon enough.
Thank you for writing, this blog always makes me happy for some reason. Hope Jenny had a great day. X

We have an “uncle Nick’s” in our life right now that we are about to move away from and my one consolation is that our “Aliki’s Greek Taverna’s” magical lemon potatoes are replicable!!! I caught a similar sounding recipe on an old old old Martha Stewart show awhile back and couldn’t believe I didn’t realize this dish wasn’t restaurant specific. (especially since my best friend is very Greek) None the less, THANK YOU FOR THIS RECIPE!!!!!!

May be a silly question, but fresh or dried oregano, judging by the amount I would guess fresh, but want to be sure.

Melissa – -I used dried Mediterranean oregano. I imagine you can use as much, or as little, as you like — a personal taste issue. Tell us how it goes…

Those potatoes sounded so good that I have some in the oven riiight now. Yummmmmmmm.

I want to try this but if I turn my oven up to 500, i know the spuds will char and then my smoke alarm will go nuts…and then so will my kids. If I set it at, say, 400, how long should I cook it? Should i cook it at a higher temp to brown it and then turn it down? Thanks!

Happy Birthday, Jenny. Thanks, Andy, for once again writing a piece that makes me laugh out loud at least once. My husband’s birthday is at the end of the month; this looks like the perfect menu!

We made these last night and they were amazing. I was also worried about the 500 temp, but it wasn’t a problem – I guess because of the liquid? They were, as promised, oily without being greasy. And bonus! The leftover lemony oregano oil in the pan we can use at some future point for dipping bread, making a salad dressing, roasting veggies, tuna salad …

I made these with a leftover bake potato and lower oven and YUM!

Also, for my lunch today used the lemony-oil mix with cubes of peeled sweet potato and beets and 475 oven for 30 minutes. Again, YUM. LOVE the lemony garlic olive oil water method – thanks!

Wow. I don’t often comment on blogs I read, but these were amazing enough that I had to come thank you for the recipe. I used small red potatoes cut in half (skin on) and was a bit worried that they’d fall apart with the high temperature, but they were absolutely perfect. We ate every last bite of an entire pan in one sitting! I’m already thinking about who I can make them for next. Thank you!

Just as commenter Katy said, I used small red potatoes for this recipe, and boy, were they good! So tender and flavorful, and easier than my roasting method (requiring first a foil covering, then carefully turning, and carefully turning again…) These were popped in the oven, and then came out delicious! And my house smelled amazing, too. Thank you for the great recipe!

My Greek grandmother used to add 2-3 daphne leaves too. You can try it with Greek feta cheese. It is delicious.

Your greek potato recipe is minimally-perfect and can be savoured as described. My only addition would have been just a pinch (“an idea” as greek cooks say) of rosemary, due to our southern greek culinary tradition (Peloponnese).