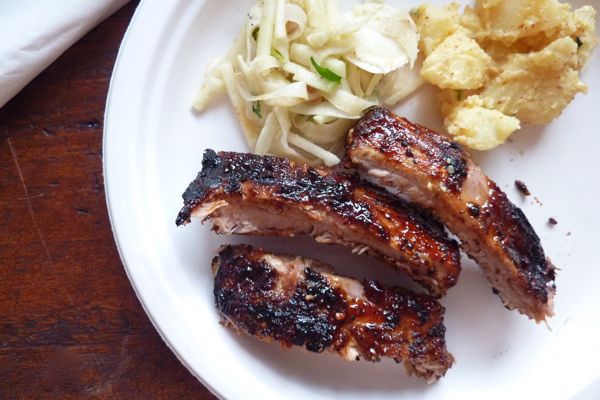 I’ve gone on record saying that there is no such thing ever as a gimme meal when it comes to cooking for kids. But I’m just going to come right out and say this: If ever there was a gimme meal, these ribs are it.* Not only because they are so melty and gooey and quintessentially summer, but because they demand the complete abandonment of whatever table manners you have attempted to hammer into your children thus far. I think it’s the only time all year I encourage my girls to eat with their hands and get as messy as they want to. (It’s not like they’re ever more than 10 minutes away from washing up via pool/sprinkler/hose anyway.)

When we made the ribs this past weekend, we rounded out the plate with potato salad and slaw, which in my opinion, are the only things anyone should ever be allowed to round out a plate of ribs with. Ever. By law. And I’m warning you — this fennel-apple slaw may just be 2011’s Lemon-Pepper Grilled Chicken, i.e. the dish that I cannot go a week without mentioning to someone, somehow, somewhere. If you don’t think the kids will go for it, you can go classic slaw as well. 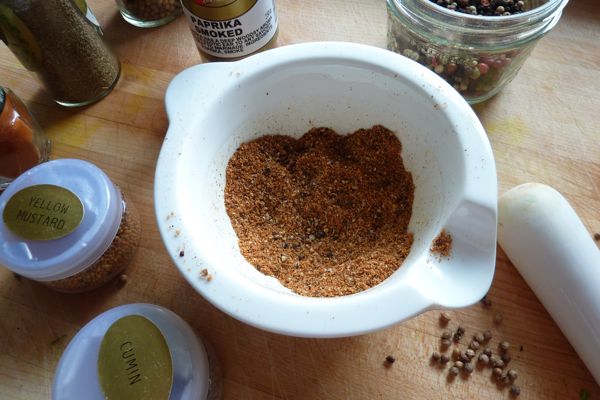 The Dry Rub The most important ingredients in the rub are salt, peppercorns, and sugar (1:1:2) Everything on top of that is according to taste. (See below for what Andy did.) If you want something spicier, add more cayenne. If you like chili powder, by all means throw that in there. PS: The Kuhn Rikon Mortar and Pestle in the pic above makes a really nice host gift. 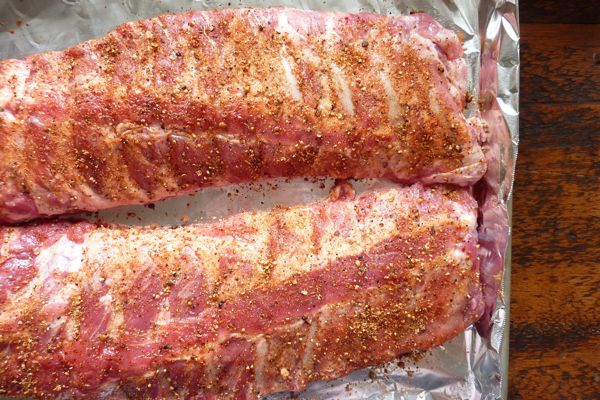 When you’re smearing on the rub, make sure you get the edges, too. 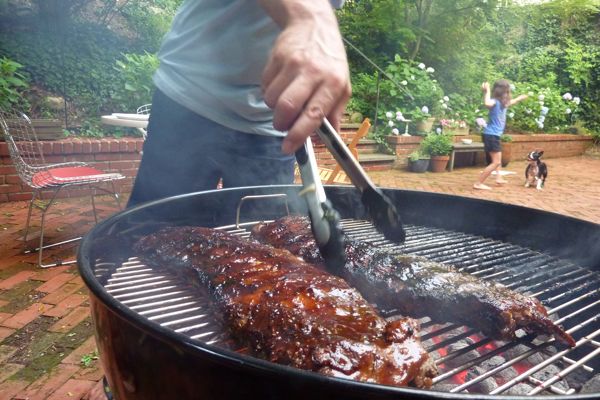 With a spice grinder or mortar and pestle, grind:

Until everything is crushed. Add:

Smear the rub on the meaty side of 2 rib racks until coated. (You’ll have some rub left over; store and save for next time.) Place on cookie sheet, cover with foil, and bake at 300°F for three hours. Remove and set aside. When your fire’s ready (you don’t want to put them over a raging fire; let it die down a little til it’s about medium heat) grill ribs for 2 minutes a side to get a little char going. Then brush meaty side generously with barbecue sauce (storebought or homemade). Keep flipping, a minute or so a side, being careful not to burn, but getting the sauce nice and caramelized as shown above. Cover and cook for five minutes. Remove from heat, and slice ribs along the bones on a cutting board. Serve with fennel slaw (below) and tons of napkins. 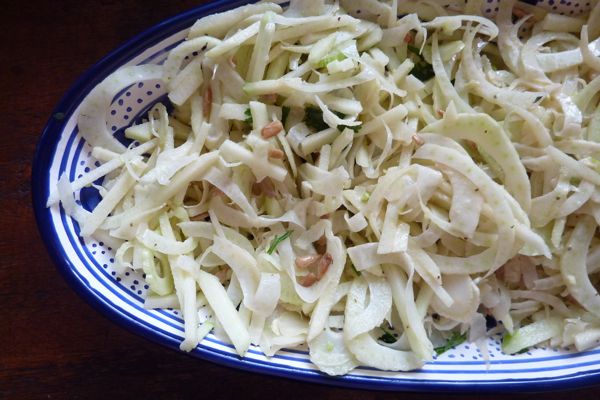 Mustardy Potato Salad (adapted from How to Cook Everything)
This is a great side dish for a people who are not big fans of the mayo-based potato salad.

Chop baby red potatoes into one-inch chunks.  Boil in salted water, 12-15 minutes, or until tender. Rinse and set aside.

In a mixing bowl, add oil, both mustards, balsamic vinegar, salt and pepper. Whisk until thoroughly combined. Add warm potatoes to bowl and stir gently, to coat. Sprinkle with fresh herbs and serve.

Jenny, I am eating summer through your post. Fennel, apples – a salad wonder, no doubt. This one’s making it into my weekend cookout. Thanks

We’ve had a rack of ribs lingering in the deep freeze waiting for just the right occasion and recipe. I think we’ve found it.

Yum!!! I’ve been in such a mood for ribs. I know tonight we’re having grilled salmon, an asian-inspired cole slaw and baked beans.

Wow. So much good stuff packed into one post!

First of all- I will definitely try the lemon pepper chicken (first time seeing the recipe!), as is sounds like a surefire recipe.

Second- I’ve been searching for a good homemade BBQ sauce… I’m printing this one out too.

Last- This post comes at a perfect time. We’re making ribs this weekend for my daughter’s birthday and although my husband makes really good ribs, he doesn’t have a go-to spice rub (or sauce). Can’t wait to share this one with him!

Looks great, plus ribs are on sale this weekend. Thanks for the recipe!

We made ribs on Saturday- using your bbq sauce recipe… Our new favorite sauce (and we’ve tried many homemade recipes)!! Thank you. We used a different rub recipe (one that I’d already bookmarked to try), but next time, we’re trying yours :).

Not sure what went wrong with our batch, but our ribs were D R Y after the 3 hours in the oven (last hour with the temp lowered to 200) and ~5-7 minutes on the grill. Did I miss a step?

okay “mandoline” was always a page turner for me but I finally broke down and got one–this slaw was totally worth it. Fantastic, as is the potato salad. Still can’t get up my nerve to try to do ribs though…

The combination of fennel and apple sounds like it could work pretty well.

Made these last night: so easy, so delicious!!!