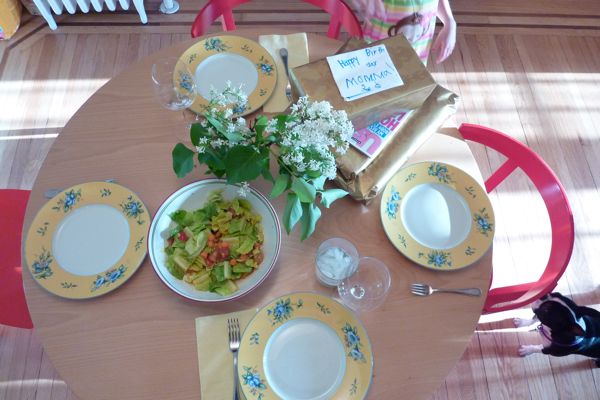 If you’re going to have a site devoted to family dinner, you gotta walk the walk, right? So when I asked Jenny where she wanted to eat for her birthday dinner last week, I should have known what the answer would be: home. I huddled with the kids and asked for some help: what should we make? The only requirement was that it be something everybody in the house eats, and it couldn’t be chicken or pizza. Phoebe wanted steak, Abby didn’t. (“It’s not fair!” she claimed. “Phoebe always gets steak!”) Abby, aiming high, suggested something called macaroni and cheese, but Phoebe doesn’t eat pasta. (“Too slimy,” she said.) So we settled on salmon. The question was, how to make this feel more festive than your normal Thursday night dinner? We needed some good sides. We wanted to make something we’d never made before. I had an idea. 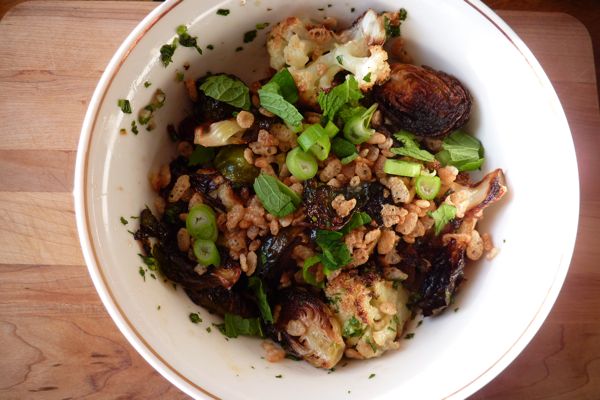 We might not have been going out to a restaurant for a dinner, but what if we had one of our most favoritest restaurant dishes at home? We don’t get out too much these days — i.e., ever — but we did manage a meal at David Chang’s Momofuku about six months ago, and Jenny still talked about his brussels sprouts. They were crazily flavorful, charred to a crunch, salty, cilantro-y, and… didn’t they have, like, Rice Krispies sprinkled on top? I wondered if they were hard to make. Turns out, they’re not. (And because we had a good-looking head of cauliflower in the refrigerator, I decided to use that, too.) When Abby found out that her vegetables on this night would include fried Rice Krispies — not to mention sugar — she shifted, like that, from ambivalent skeptic to unblinking believer. 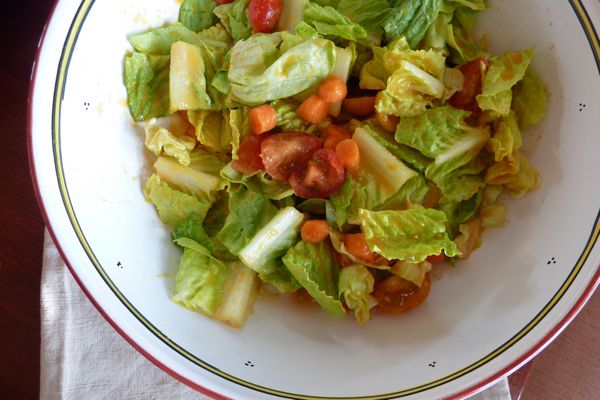 The other thing I asked of the kids is that they pitch in, help make this dinner special in some way. Phoebe announced she’d make her “famous salad,” and Abby said she’d set the table. Phoebe went to the refrigerator, gathered her ingredients, and chopped them herself. (Except for the romaine lettuce, which I cleaned and chopped for her.) She went with carrots, tomatoes, and about sixteen gallons of carrot-ginger dressing. I brushed the salmon with lime, soy, maple syrup, and fresh ginger, and cooked it on a cast iron grill pan for about 8 minutes a side. Abby promised to “make the table look like a restaurant,” and apart from the lack of napkins, I’d say she did a real nice job. 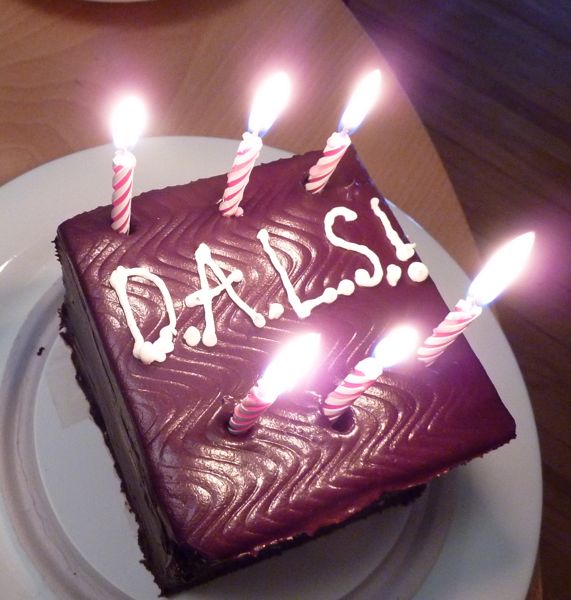 Which left dessert. Here’s the thing about baking: I don’t do it. But there is a great bakery nearby, and Jenny loves a seven layer cake, so that — with some slight customization — is what we got. No argument from the kids, either.

David Chang’s Brussels Sprouts, with cauliflower and some tweaks
(adapted from this version on epicurious)

For brussels sprouts and cauliflower:

Preheat oven to 450°F. Toss brussels sprouts and cauliflower with oil, then arrange, cut side down, in baking pan. Roast, without turning, for 40 minutes, until tender and very dark brown. Add butter and toss to coat. Put in a serving bowl.

While the veggies are roasting, make the sauce. Stir together all dressing ingredients until sugar has dissolved. Set aside.

When the sprouts and cauliflower are out of the oven, make the rice krispies. Add oil to pan and cook cereal, stirring over medium heat, until rice is coated and begins to go slightly golden, about 3-4 minutes.

To finish, toss veggies with a few spoonfuls of sauce, just enough to coat. Then sprinkle with puffed rice, torn mint leaves, scallions, and cilantro, and serve remaining dressing on the side.

Just so happens I have some brussel sprouts hanging out in my frig. My preschooler asked me to buy them because she thought they were cute. I’m hoping this recipe will help them live up to her expectations. I’m going to need to find an alternative for the Japanese spice blend though.
Thanks!

What does D.A.L.S.! stand for? That cake looks mighty and delicious!

This is a very belated comment, but I finally made these a couple of times recently and thought the vinaigrette would be even better with some acidity, so added some lime. Then I googled and lo and behold the Chang recipe in food & wine has both rice vinegar & lime juice, and thus I think makes the delicious version here even more delectable: http://www.foodandwine.com/recipes/spicy-brussels-sprouts-with-mint

Fantastic idea to include cauliflower!