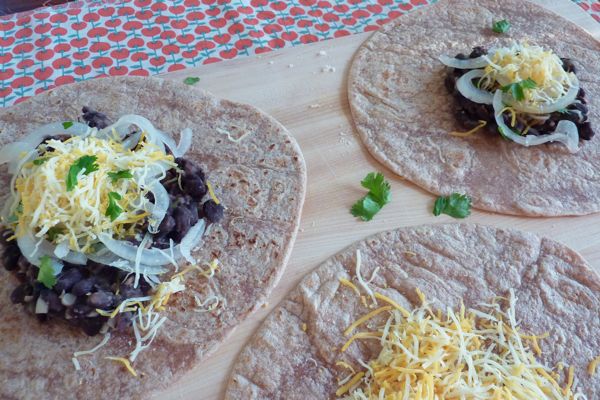 Black bean burritos (and one all-cheese for Abby)

I have no idea how this became the unwritten rule of dinner in our house, but when one of us discovers a new recipe, cooks it for the family, and it’s a success, it is the cook’s responsibility to prepare that dinner from that point forward. Forever. We have probably eaten Chicken Cutlets with Soy-Lime Sauce from Bittman’s How to Cook Everything (page 391) two dozen times since 1998, and Andy, who was the first to recognize its potential for brilliance, has prepared it every one of those times. Likewise, Andy has never made “my” maque choux, lettuce hand rolls, or minestrone. It has nothing to do with skills or technique. A meal breaks down party lines purely by provenance…which can come in handy. Last week, when I answered “those Gourmet Burritos” to Andy’s question “What should we have for dinner?” it was as much out of laziness as it was out of a craving for an easy vegetarian dinner. Because the recipe for “those Gourmet burritos” (from the Gourmet Today cookbook) belongs to him. 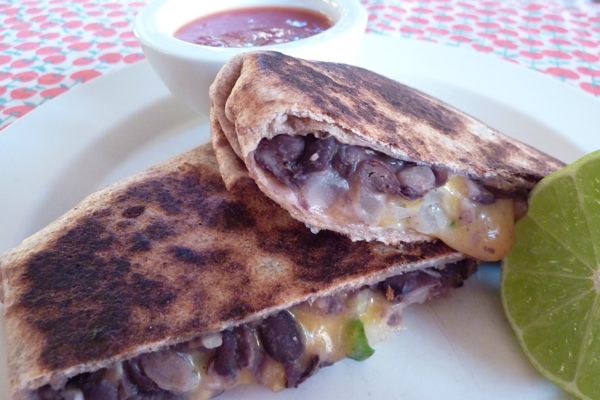 Prepare the onions: Bring water, vinegar, sugar, and salt to a boil in a heavy saucepan. Add onion, and simmer, uncovered about 3 minutes. Drain and cool to room temp.

Make the filling: Heat oil in a skillet over moderate heat until hot but not smoking. Add garlic, cumin, salt, and pepper and cook, stirring, until garlic is golden, about 1 minute. Stir in beans, coarsely mashing them with a large fork until combined. Add water and scallions and cook, stirring until most of water is absorbed, about 5 minutes. Remove from heat.

Assemble: Spread one sixth of bean filling across middle of 1 tortilla, leaving a 1-inch border at either end. Sprinkle with 1/3 cup cheese, 1 heaping tablespoon pickled onions, a little cilantro. Fold ends of tortilla over filling, then roll up tightly, enclosing filling. Transfer seam side down to a plate and assemble 5 more burritos in same manner. Heat 1 1/2 teaspoons oil in a skillet over moderately high heat until hot but not smoking. Add 2 burritos, seam side down, and fry until lightly browned on underside, about 2 minutes. Turn over and fry til golden another 2 minutes. Repeat with remaining burritos and serve with sour cream, salsa, and a squeeze of lime.

Too funny… you make it you own it. That is more or less how my husband and I are. Somehow, it works!

I love this idea! I need to get my guy on board with “your meal, your turn to cook”!

Funny, it works exactly the same way in our family! (And likewise, without any planning.)

I love this idea! I need to get my guy on board with “your meal, your turn to cook”!

Tried this the other night and it was delicious! Our 2-year old even loved it (and learned to say burrito). Don’t skip the last step of browning these on the griddle – a really great touch.

To make this GF, use corn tortillas and serve as tacos. They are not as neat to serve but your GF friends will be happy to enjoy them with you.
I am a newsletter subscriber. Do I win the Baked Better Bread Prize?

My family loved these! I just made them as quesadillas to simplify a bit more. I also told my 5 year old, who does not like to try new things, they were Magic Quesadillas and she was super excited to try them.

I made these the other night and the burritos were a favorite (so far) as we cook our way through the book. It reminded me of how much I love black beans — which I ate till I hated them in the mid-90s. The love has been revived! My 9yo asked for 2nds, ruining my next day lunch plans but thrilling me anyway.

Made these tonight, added half a package of frozen spinach instead of the 1/3 C of water, and then filled 8 8-inch tortillas. Turned out delicious, we all decided they’ll be part of our regular rotation 🙂 Thanks for the yum!