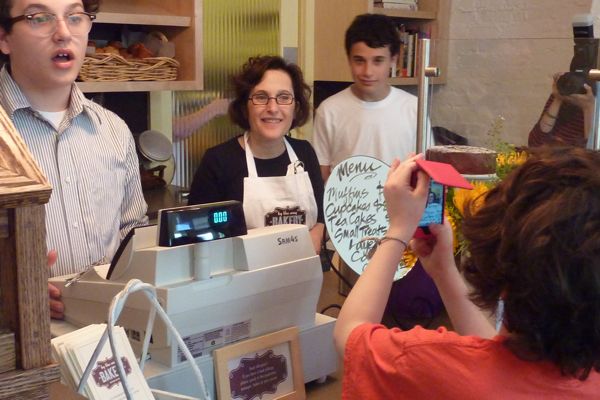 Just about a year ago, my neighbor Helene walked into her midtown office at Bloomberg LP, where she was employed as in-house counsel, and told her boss she was quitting. She had two teen-agers at home and was tired of the grind, tired of her son’s friends asking him “So where does your mom live?” She wanted to be around more. To slow down. I’m sure her boss was shocked, but he couldn’t have been more shocked than I was. Because as long as I’ve known Helene, she’s been on the move. Seven years ago, during those magical moments nursing Abby at 5:30 in the freaking morning, I’d look out the window across the street and see Helene’s bedroom light on. What could she be doing at this hour…voluntarily??? A few months later, during our first winter on the block, there was a huge snowstorm that kept us all holed up in our houses —  but instead of bunkering up and breaking out the boxed mac & cheese like I had planned, she and her husband Seth invited half the neighbors to a multi-course dinner featuring a spicy Thai-style squid salad. (Did I mention they are also world-class cooks?) I got used to seeing Helene zipping around town in her pumpkin-colored mini-Cooper convertible, which, during the week, was always parked in the first spot at the train station. She got in early and worked hard and was always home for dinner. Long before DALS existed, I asked her what the secret was to raising such smart kids and — I’m not making this up! — her answer was: “We eat together every night.”

But we sat down for morning coffee soon after she left her job. “What do I do all day?” she asked, still sweating from the 8AM spin class she had come from. “I’m so confused!”

“Helene, it’s Tuesday, ” I told her. “You’ve only been home since Friday.”

I should’ve known better than to think that she was going to “take a breather” or devote her summer to, say, working out the kinks in her backhand. Before June was over she had signed up for a vegan baking class at ICE and started talking about opening up a gluten-free, dairy-free bakery. By July she had transformed her oven into her home office, churning out lemony pound cakes, sugar-topped raspberry muffins, fudgey brownies, gooey chocolate chip cookies, orange-almond cakes, coconut macaroons, vanilla and chocolate cupcakes (the girls’ favorite) then dropping them at our house for a taste-test with the command: “Be brutal! I can take it!” By September, I could barely walk the dog without seeing one of my other neighbors shuffling up the block cradling some delicious cellophane-wrapped, raffia-tied baked good. (“Good morning Eileen! Coconut Layer Cake today?”) By February, Helene had perfected her recipes, designed an awesome logo, signed a lease on her storefront, and by May, i.e. last weekend, she opened the doors to  By The Way Bakery.  As in, “This is delicious! Oh, and by the way, it’s also gluten-free and dairy-free.” You’d really never know the difference. 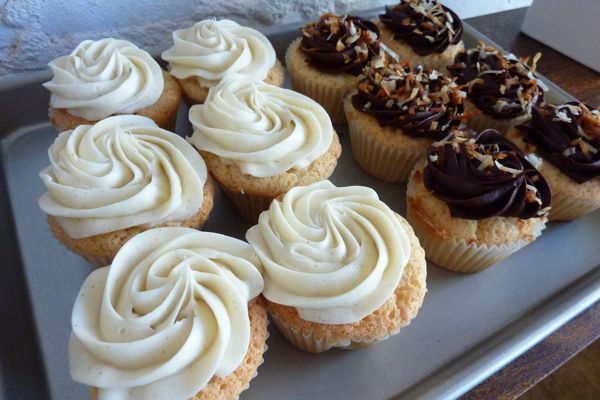 On opening day, she was working harder and moving faster than ever, but this time she was flanked by her two sons, who were manning the register and taking orders. A lot of orders. If you’re local, please stop by and see what the fuss is about. If for some criminal reason you do not walk out of there with a bag of chocolate-dipped macaroons (my favorite), I guarantee you’ll walk out of there with some inspiration. 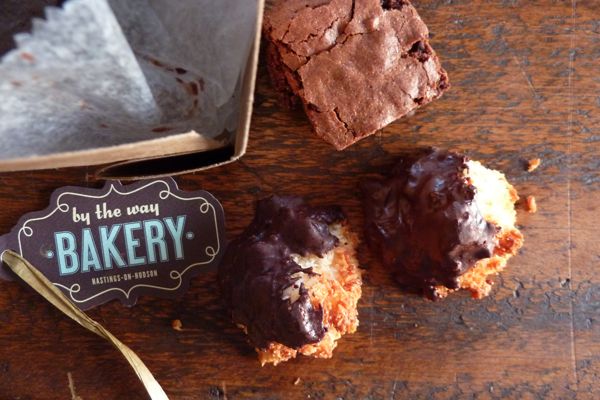 And here’s a treat for those of you who aren’t local — a recipe for her popular orange-almond cake. 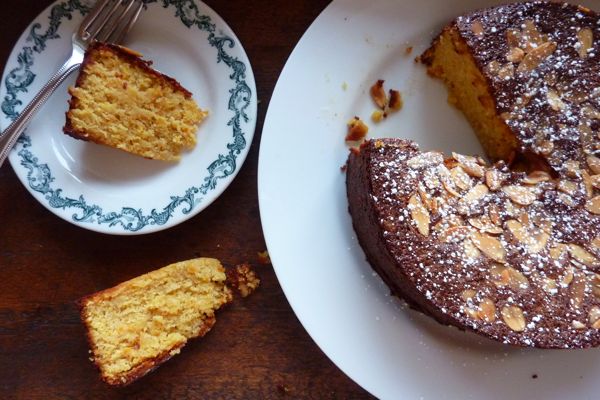 Gluten-free Orange-Almond Cake
Recipe by Helene Godin from By The Way Bakery. Makes one 8-inch cake.

-Place whole orange in a pot of water with 1/2 teaspoon salt.  Cover the pan and bring the water to a boil.  Turn the heat down and simmer for about 2 hours.
-Remove orange from the pan and allow to cool.  Slice the peel off each end of the orange and cut into quarters, leaving the rest of the peel intact. Inspect for seeds, discard, and allow to cool. In a food processor, pulse the orange quarters until it’s smooth but still pulpy. Let cool completely, about 30 minutes. (You should have approximately 1 1/4 cups).
-Preheat oven to 350°F.  Lightly spray an 8” springform pan with cooking spray and line with a circular liner.
-Whisk together almond flour, baking powder, remaining salt, cardamom and cinnamon.
-In another bowl, with an electric mixer, beat the eggs and sugar until light in color.
-Mix in dry ingredients.
-Mix in orange pulp.
-Pour the batter into the pan and sprinkle with sliced almonds.
-Bake about 1 hour.  Test for doneness with a wooden skewer inserted in the center.
-Allow to cool completely in the pan for 25 minutes. Score around the edge before releasing the ring from the cake. Dust with powdered sugar. 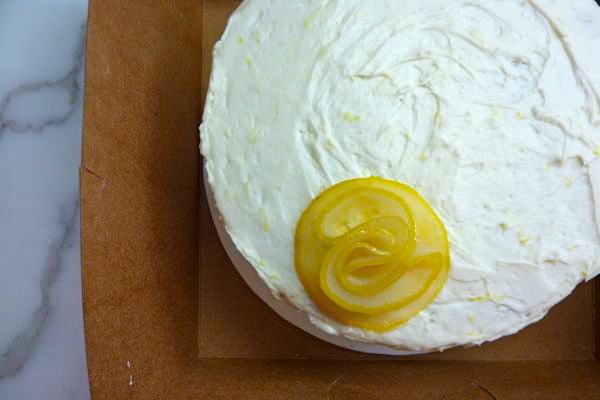 And this is her Very Lemony Lemon Cake. Would you look at that beautiful rosette of candied lemon slices? Does that not say it all?

Wow, so inspiring. Best wishes to Helene. I hope she is already writing the “By the Way” cookbook!

I also quit my job to do my own thing! Not as yummy as this though. But then again I don’t need to get up as early 🙂 Thanks for making me so hungry–I want to reach in and gobble up that cake! Good luck Helene!

I am so jealous. She is living the dream! Good for her for taking a risk. I hope her bakery succeeds.

Thanks for sharing. I love inspiring stories (and women) like this. Meanwhile, here I sit (or rather run) in this rat race 🙂 Wish I were local so I could come by her bakery!

SO excited for them. 🙂

Nancy – She should totally have her own cookbook. The recipes are pretty awesome — and you can see from this one above, very doable.

What an inspiring story! Because just yesterday I was thinking to myself how much I hate my job and how jealous I am of those who get to be there to pick their kids up everyday at the end of school, not the end of aftercare where the parents look like exhausted zombies after an all nighter. I hope I can do something like this sometime (is there a job out there for cupcake taster and candy wrapper – that’d be my new job). And thank you for sharing the recipe. Nothing worse than a bakery that won’t share at least one recipe (I’m talking to you, Specialities).

Hooray! As someone allergic to gluten (not eating that way ’cause it sounds like a cool idea, but actually allergic) I’m always desperate for yummy gluten free food. And this looks seriously delicious. Now, I live in Savannah, but we are about to take the mother of all road trips this summer and New York is on the list. I just have to figure out where Hastings-on-Hudson is and I’ll be there. This just made the gigantic list on the wall of places to see! Going to the store tonight to find that naval orange and I am definitely making this recipe tomorrow! Thanks

What a wonderful story – I love her drive and her food. Thanks for sharing.

Can I just say that I love you people?? As soon as you said gluten-free/milk-free I popped over to the site and said to myself “goodness does that orange-almond cake just sound divine!” and when I came back you had the recipe! I nearly wept.

Okay, maybe not, but I sure am happy about it!!

ps, I read your blog every day and love it. 🙂

This recipe looks lovely and that story is inspiring. What a lot of courage it takes to turn your life upside down like that!

I love this story so much. I might walk in to work tomorrow and quit myself.

The cake sounds amazing but I think there may be a typo in the ingredients list — it says “3 tablespoons cup sliced almonfs” — not a measurement I’m familiar with! Can you clarify the amount? Thanks!

So sorry Becca! It’s definitely tablespoons and it’s all fixed now. Thanks for pointing that out — hope that means you are planning to make it.

Made this cake on Sat. for a midmorning brunch/snack. It was a big hit and no one noticed the “free” part. It was very moist. I did mention to some of my food friends, especially those with dietary needs.

I love this story, so inspiring. It is so nice to be reminded that there may just be another work life out there that we can live. I have been racking my brain lately trying to figure out what that might be, so it’s wonderful to see someone else who has done it. All the best to Helene and thanks for sharing the recipe. Going to try it out this weekend!

Thanks so much for this divine *free* recipe. We are vacationing soon with a group that includes both dairy, wheat and soy allergies. I am certainly taking this cake with me. I always learn so much here!
P.S. Your newsletter sent me. Do I win the apron?

I can’t wait to try this recipe. It’s sounds so good!
PS: Your newsletter sent me. Do I win the apron?

My recently gluten-free mother-in-law doesn’t know much about gluten-free baking. I just did a test-run of this recipe to see if it will make a good birthday cake for her. The cake is moist and scrumptious and I can hardly wait for MIL’s birthday to make one for her. I think it will open her eyes to all the gluten-free possibilities out there.

Love everything at by the way bakery .. but in particular my grandchildren love the biscotti or
Mandel bread cookies. We don’t get into nyc very I love to bake with my grandchildren. Please share the recipe !
Many thanks
Nana Amy