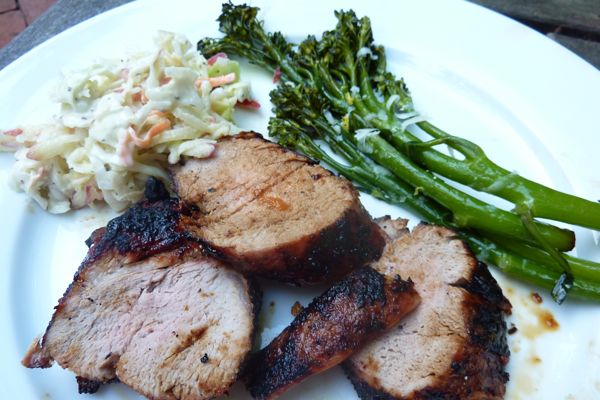 Last year, we hosted Christmas dinner for the first time – the full deal, too, with both sets of grandparents, brothers, sisters, kids, cousins, and an insane puppy, all wilding through the house. We needed a meal that everyone would like and were determined not to serve chicken fingers and crinkle cut fries. We discussed various festive options — filet (too expensive), turkey (too Thanksgiving), goose (too inedible) – but just weren’t feeling any of them. So I asked my friend Adam , who has the kind of dinner parties that make you wonder why you even bother trying. Adam’s a man of strong opinions. About everything. There’s a right way to do things, and a wrong way to do things. “Dude,” he said. “You make a smoked ham. And you glaze it so it gets all shiny and shit. Put it in the middle of the table and let people admire it.”

His recipe contained all of two ingredients – apricot jam and dark rum – took about fifteen minutes to prepare, and was, as Adam would say, rindonkulously tasty. Guests were practically weeping with joy as their sodium levels skyrocketed, and the kids loved the crackly, candied crust. The dog seemed to approve of the leftovers.

Fast forward six months, to last Saturday night. A beautiful, warm June night, the perfect night for grilling. The only kids wilding through the house were our own. We decided to try Adam’s glaze on a one-pound pork tenderloin we’d had in the freezer for a couple of weeks. We added one ingredient (rosemary), but otherwise, we’re pleased to say that the same technique works for any occasion. Clean plates all around. We’ll be making this one again soon. – Posted by Andy

Heat jam, rum, and rosemary in a small saucepan.  Bring to a boil, simmer for a few minutes until syrupy and reduced by half, about 4-5 minutes. Pour into bowl and set aside.

Meanwhile, rub the loin with olive oil, salt and pepper. Place on the grill, turning every few minutes, for about ten minutes. Then, take your glaze and brush it on the meat, coating it as it cooks. Brown on all sides turning frequently to avoid charring the sugary glaze, for another five minutes. You want the crust to bubble and caramelize, but not burn.

Remove from grill and let rest for a few minutes. Slice and serve.

Serve with a vinegary cole slaw (we added a grated apple) and grilled baby broccoli. (Toss it with olive oil, salt, pepper, a squeeze of lemon, wrap in foil, grill for 7 minutes-ish and finish with some freshly grated Parm.)

Oh, I am loving this!
P.S. I made the peanut sauce and the spinach…we loved it.
Best,
Tina

I thought for sure the Adam link was going to take me to my brother-in-law Adam’s website who is just as opinionated about everything.

I love sugar and meat.

My mom used this on spare ribs, fantastic!