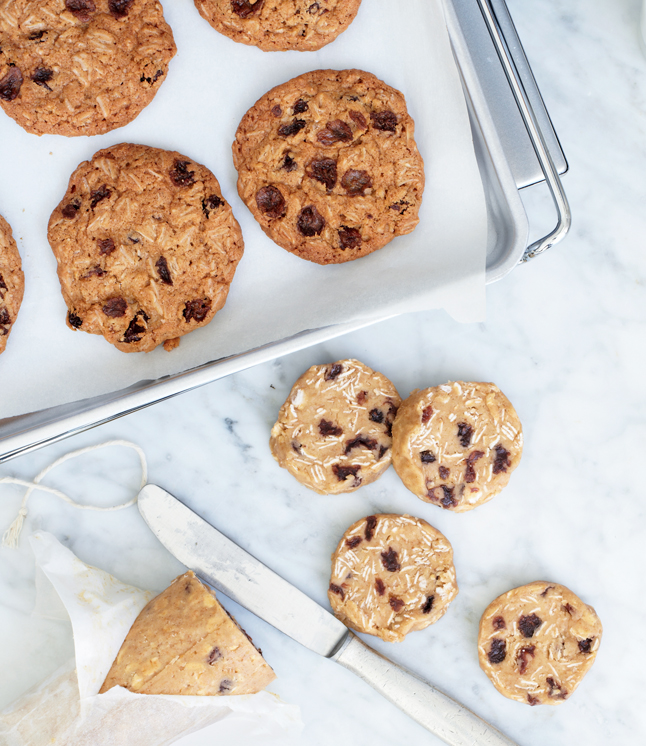 We wish we could tell you we raised our kids to think of dessert the way one is supposed to think of dessert: as a “treat” in the true definition of the word; as something you get rarely, if you’re lucky; as part of a celebration – say, an ice cream cone after a hard-fought soccer game, a slice of cake at a birthday party, or some cookies, dipped in milk, on a Friday night. But the sad truth is, our kids consider dessert – like water, shelter, allowance — their birthright. It’s gotten to the point where Phoebe, will finish her dinner, rise from her chair, and begin plunking packages down on the table: Dark chocolate peanut butter cups, a box of shortbread cookies, a bowl of leftover Easter or Halloween or Christmas candy. The question she asks is not: “Can I have dessert?” It’s: “How many can I have tonight?”

We tell ourselves we’re only partly to blame. Back when the girls were toddlers and we were mired in an extended picky eating phase, we had no choice but to ignore all the expert advice and go primal. We were desperate, don’t you see, forced to leverage dinner with something sweet – If you don’t eat that chicken, no dessert tonight. If we’re honest, though, the more likely root of the problem is the fact that we, the supposed grown-ups, are chronic violators of the cardinal rule of parenting: Do as I do, not as I say. The only reason the kids think it’s normal to celebrate “No Cavities!” with a bowl of pudding or finish lunch with a chocolate chip cookie is because we — the Providers, the champions of kale, quinoa and omega-three-rich fish — are guilty of the exact same behavior.

We want to stop eating so much dessert, but those chocolate-covered almonds from Trader Joes are so good. You know the ones with the fleur de sel? We would stop, if we could. And these slice-and-bake oatmeal raisin cookies are our first attempt to establish some limits. The idea is to control the portion size on the front end — to slice and bake only as many cookies as there are mouths to feed – then into the toaster oven they go. As soon as dinner is over, four cookies are warm and ready to be savored with a cold glass of milk. Or crumbled atop a scoop of vanilla ice cream. But that’s all. We swear.

This is our Provider’s column for the April issue of Bon Appetit. Head over to their site for the Slice-and-bake Oatmeal-Raisin Cookie recipe. Photo by Brian W. Ferry for Bon Appetit.

Sweets have always been my downfall too. Whenever I go a day or two where I feel like I’m finally eating better food, I always feel like I deserve a reward! You’re right about portion sizing, I think, and it seems like a commonly accepted idea these days that a philosophy of deprivation may not be so successful.

I’ll have to try that oatmeal cookie recipe! I appreciate that it uses whole wheat flour – I’ve been trying to make better choices with my kitchen staples, mostly taking suggestions from a book called Health on Your Plate. I might try that recipe using Sucanat instead of brown sugar, I think the cane flavor might work out pretty well! Thanks for your post, and enjoy your treats 🙂

We used to have the same issue. What we did was go to ‘dessert nights.’ Not exactly saving dessert for rare treats, but now it’s only 3 nights a week. To my surprised, this was greeted with no resistance whatsoever. I make cookies, frozen unbaked, and make them in the toaster over like you on an as-needed basis. We also walk down the street for frozen yogurt or stop at the bakery and each pick out an after-dinner cookie. Not having a lot in the house all the time helps as well.

Same issue here – in fact, who does not have this issue? No one I know! My best friends resolution was to ‘not eat dessert after every meal.’

As far as Trader Joes goes – those dark chocolate peanut butter cups. We store them in the freezer, thinking we won’t eat as many but in reality, well, they are just better that way and we end up eating more.

I’ve never thought about oatmeal raisin cookies as icebox cookies! That’s a really good idea. But my only problem is that having the dough in the freezer would be just as big a problem as having the baked cookies. I know I’d just pick at it all day long. Maybe this is TMI.

I think its okay to have dessert, as long as you choose something healthy! Great post.

Unbelievable. My kids do the exact same thing! Pull out the cookies (ice cream, leftover Easter candy) and say, “How many?”

You won’t always be around to police your kids and their food intake, so learning a bit of self control (a dirty nowadays, it seems) is no bad thing.

made these tonight w my 3 yr old. they’re great, esp w a cup of tea! thanks!

We do this! And partof my new-baby food gifts is a Ziplock bag of frozen cookie dough balls, so new moms can bake a couple on the fly.

What a fantastic idea. Sweets are so delicious but not good for our waistline, ugh! But in moderation they can be done without having to buy bigger clothes. 🙂 I’m definitely going to do this.

I’m late on seeing this, but I did want to comment because my kids are dessert fiends, and part of that is because one of them was an extreme picky eater from the time he was weaned.

After a long time, I finally stopped making separate meals, and insisted on one meal for the family. But to swallow that bitter pill, I had to have the promise of dessert after. Years later.. he’ll happily eat minted lamb kebabs (last night), masala tilapia fillets (a weekly rotation), and will suffer through new recipes if he knows there is dessert in the horizon.

The only thing that keeps me from stressing the fact that he eats dessert every. single. day.. is that he’s thin as a rail. plays sports, and expends so much energy on a daily basis, that I don’t think we’d keep up calorie wise without it.

His sister, bless her, is also a dessert junkie. But I worry more with her as she’s not as active as her brother. It’s not an issue right now, so I don’t want to make it one.

I’m not a sweets person, but I do love baking, so I try my best to do that as often as possible. I figure if I know what’s in it, that’s better than a fully processed sugar bomb from the store.

Have you ever thought about writing an ebook or guest authoring on
other blogs? I have a blog centered on the same information
you discuss and would love to have you share some stories/information.
I know my audience would value your work. If you’re even remotely interested, feel free to send me an e-mail.