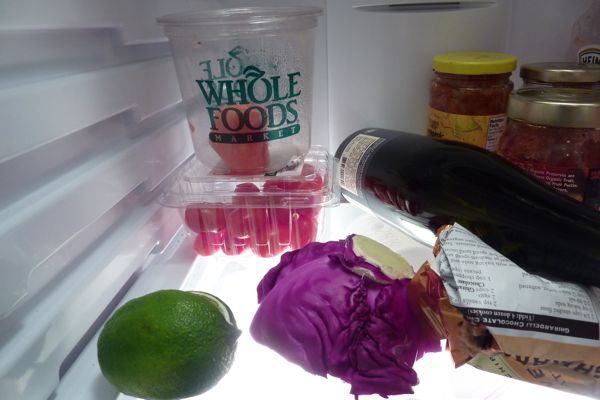 We usually do our food shopping once a week, on Sunday afternoons, bolting to Trader Joe’s as soon as the final whistle on the final soccer event of the weekend finally blows. It’s our secular pilgrimage. We genuflect at the altar of dried fruits and granola bars, we load up the cart, we drive home, the kids go upstairs to animate some plastic stuff, and Jenny and I begin the never-gets-less-brutal process of unpacking the groceries… at which point, we realize, as we put the fresh crop of vegetables into the refrigerator, that we haven’t made use of half of what we bought last week. There’s a sad fennel bulb, once crisp and fresh, now yellowish and funky. (A pity, too: I had big plans for that. Look for a roasted fennel recipe one of these days.) There’s a quart of now-slimy mushrooms, and an exhausted hunk of red cabbage. There’s an ominous cluster of tupperware containers, each holding part of an onion, lemon, or red pepper, all of uncertain vintage, all well past their prime. And way in the back, by the sour cream, there’s always a tub of grape tomatoes, now a week old and only 1/3 eaten, and we really want to make use of them, but they’re just this side of too-far-gone to put on our salad.

We’re not proud to admit this, but we often end up throwing too much of this stuff away. It’s a lot of food, and a lot of money, to go to waste. 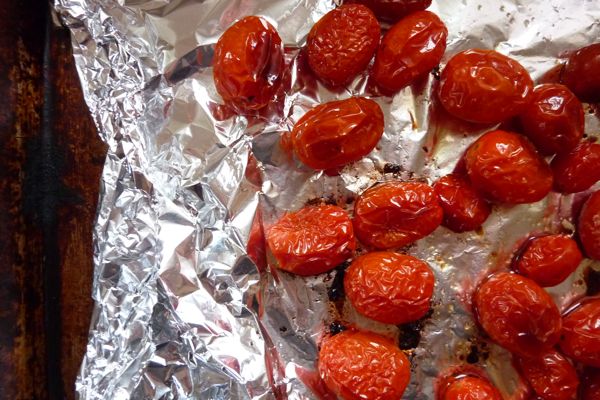 Last weekend, though, we may have solved the grape tomato problem. Since they were already starting to turn, we embraced the shrivel. We doubled down on the decay. We slow-roasted them, until they were all wrinkly and intense and sweet, and then we tossed them into a quinoa salad. Roasted tomatoes are so easy, very hard to mess up, and versatile as they wanna be: you can put these over pasta with olive oil and cheese, on bruschetta with garlic and basil, on top of fish or chicken. Or, as we ended up doing, you can use them to add a whole new hearty dimension to a salad. Tomato problem: solved. I don’t know why it took us so long.* — Andy

* Very important note: I highly recommend listening to this while you cook. And maybe follow it up with this. Or this. Or just buy the whole album. It’s in heavy DALS rotation. 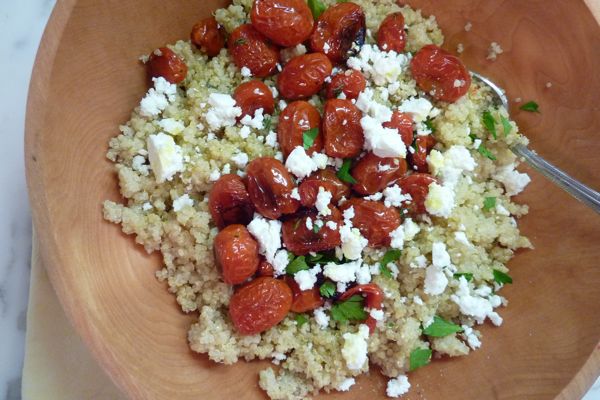 Preheat oven to 300°F. Place however many grape or cherry tomatoes you have (hopefully at least a good handful) on a foil- or parchment-lined baking sheet, and drizzle with olive oil and a little honey. Sprinkle with salt and pepper. (I added several sprigs of thyme at this point as well, breaking them up and tossing with the tomatoes, but that’s up to you.) Roast for about 1 to 1 1/2 hours. While tomatoes roast, cook 1 cup of quinoa according to package instructions and let cool in a bowl. When tomatoes are done, stir into quinoa, add crumbled feta cheese, some olive oil, salt, pepper, and a healthy squeeze of fresh lemon juice. Top with fresh, chopped parsley.

PS: This is now Jenny writing. We frequenly use quinoa to stretch leftover vegetables which makes it seem like we never have the same quinoa salad twice. But THIS one was something else. It was so good we’ve been making a point to recreate it over and over. I eat it for lunch the next day, too.

I love roasting tomatoes. I was actually planning on roasting some soon and I have a whole container full of cooked quinoa in my fridge. And we almost always have feta. You must of been reading my mind or spying in my fridge? 🙂 I can’t wait to try this salad.

Thanks for all the yummy recipes!

Take all those veggies that have almost gone bad and throw ’em in a ziploc in the freezer. When you have a few quarts bags of veggie remains, boil up in a big stock pot of water and make vegetable broth! Works for scraps as well: carrot peelings, onion ends, garlic papers, tomato cores…

The Depression-era grandmother inside of me always cries a little when I see food going bad in the fridge. I love this solution!

We must be on the same wavelength because my husband made a huge amount of quinoa this weekend on accident (2 cups uncooked). I ended up making a “scrape the bottom of the veggie drawer” salad with the leftover quinoa – persian cucumbers, grape tomatoes, black beans, parsley, sugar snap peas, feta, olive oil, lemon juice, salt and pepper. We ate it all weekend and I am going to make it again (this time on purpose) for lunches this week. Viva la quinoa!

I struggled with the wasted-veggie-guilt-factor too, until we got chickens last year. Our 4 ladies love those little scraps. Veggies, fruit, bread, pasta, meat (non-chicken, that would be weird), cheese (rarely goes bad in my house unless it is a non-fat variety). Plus, my 2 little boys just love feeding them. In return, we get a couple of nice, orange yolked eggs every day. It’s not for everyone, but I have been pleasantly surprised at how easy they are to maintain. And I love anything that eats your garbage and gives you something perfectly edible in return. When they start producing too many for just us, we sell them to the neighbors. Perfect!

Gah! Get those tomatoes out of the fridge! They’ll taste better from a bowl on the counter and they’re less likely to be forgotten.

Yum! I love roasted cherry tomatoes. I throw them in a fresh ceasar salad for something a tad different too. But who am I kidding — I also just eat them straight as a stand alone side dish.

Love the commenters idea of freezing leftover veggies for broth!

Yum!! We’re out of quinoa, do you guys think this would be just as great with couscous?

This looks so yummy! I did Zucchini with mine but I’ll definitely have to try this, especially because Feta makes me weak in the knees!
http://splifeinthesetimes.blogspot.com/2010/12/quinwhat.html

shannon – i make this with couscous all the time! roast tomatoes, zucchini, onion, eggplant, and ANYTHING really with some garlic until its very soft and carmelized….toss it with whole wheat couscous or a little cooked whole wheat orzo, a little olive oil and you are good to go! i almost always add in some crumbled cheese too – that way it makes a meal.

i love that you highlighted using up veggies like this! i do it all the time, and it is a great end of the week round up. great writing as always 🙂

COMPOST! while i would still prefer to eat everything before it goes bad, i at least feel less guilty when i do have to toss something when it’s going on the compost pile rather than into the plastic garbage bag headed for the landfill. we’ve probably cut our household trash output in half since we started composting (a lot of that was trimmings/peels/rinds, not spoiled food, but still). and we make lovely rich soil for the garden, and there’s enough to share with gardening friends & neighbors!

eeeks. So glad I’m not the only one is always finds the forgotten food when I’m putting away the new groceries. I mean to check the fridge before leaving the house, but I’m not so good at actually following through on that plan.

Just as an aside to the tasty dish you’ve cooked up here… I adore fennel and found this recipe which we do over and over in winter. It’s braised fennel with olives and the recipe looks more complicated than it actually is. All it needs is to grill chunks of fennel for a few minutes, then throw everything else in a baking dish and stick it in the oven for a while. It’s a gorgeous combination of vinegary veg with creamy polenta.

Recipe URL is below:
http://thestonesoup.com/blog/2006/07/most-wanted/

Your timing is impeccable. I have a carton of yellow cherry tomatoes on my counter that have been waiting patiently for way too long. In the oven they go tonight! I can’t get my guys to eat quinoa, but I have some whole grain orzo that I think will still work.

Love this combo–roasted tomatoes are a big hit in my house. Unfortunately, quinoa is not a favorite in my house. I love it, but my daughter turns up her nose. So I’ll try this with farro instead…mmmmm!

Oh thank you, thank you for this. I will embrace the shrivel…this happens too often to our cherry tomatoes…

dang! i was hoping that once we had children and embraced ‘real’ adulthood, the throwing-out-a-bunch-of-forgotten-food part of my life would be over (and i would step into the throwing-out-a-bunch-of-rejected-food part of my life). i’ve been meaning to try my new-ish box of quinoa for awhile now, and this just might be the thing to push me into it!

I’m still new to quinoa but not new to shriveled veggies. So glad to get a recipe to deal with both!

I can’t wait to try this one tonight. Thanks!

Another great way to roast the cherry tomatoes is to add minced garlic, lots of oregano, salt and pepper and drizzle with olive oil. 45 minutes at 350 and you have a pretty side dish, especially if you use different color tomatoes.

i love slow roasted tomatoes, i covered mine in a thick fig balsamic vinegar a few weeks ago when i made steak salad and i was never the same.

I made this a couple of nights ago. I used farro, since I was out of quinoa, and it was delicious!! Thanks for the great idea. When you shop at Costco you have to get creative about using large quantities of produce! 🙂

This is a new lunch favorite for me! So easy and yummy! I added arugula, golden raisins and pine nuts to mine.

a second comment, now that we’ve tried this method for roasting the tomatoes. the honey + lower temp was genius! we didn’t make the salad, but in the spirit of using up veggies, we had some baby spinach that demanded to be eaten. so sauteed that with garlic added at the end, and tossed with the roasted tomatoes. DELISH. really upped the “class” factor on leftover takeout pizza night! (we live in new haven where the pizza is truly first class, but leftovers can always use a little dressing up.)