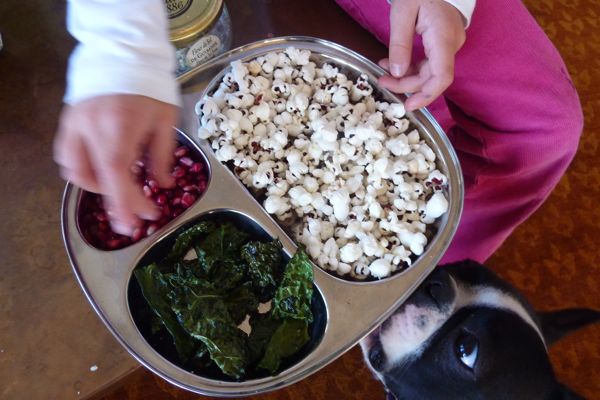 OK, so it’s Thursday, aka Halloween + 96 hours. If you followed my prescription for the candy roll-out, your kids have consumed over of dozen Crunch/Mounds/Snickers bars, and you are likely checking in with DALS today to curse my name or to call up some magical recipe that might exorcise a sugar demon or two. I don’t blame you. Times like this call for either a Detox Soup or a big batch of something so healthy, so virtuous, so green, that it is capable of eliminating all traces of junk from little-person bodies, and all traces of guilt from big-person psyches. In other words, send in the kale!

Truth be told, I was terrified of kale until recently. Sure, I’d wilt it into minestrone every now and then, but I never figured out a way to introduce it to the family table in a way that didn’t feel like homework. Kale is so ridiculously good for us: Just a small mound of it has the same amount of calcium as a glass of milk, and I may be imagining this, but as soon as I eat it, and as soon as my kids eat it, I feel smarter and stronger and have a sudden urge to start an Olympics for Parents and enter myself in every event. 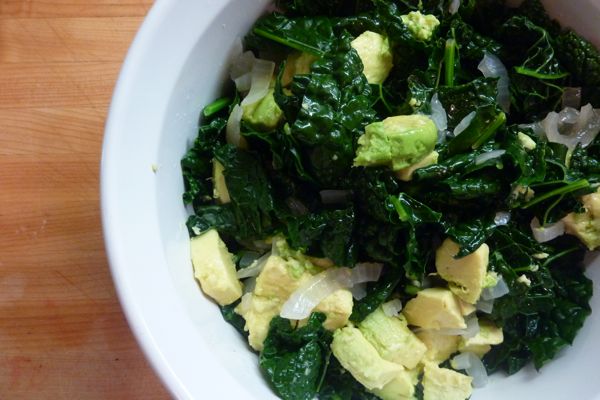 There are two recipes that convinced us that kale could be enjoyed as opposed to endured. The first was Andy’s: Kale with Avocado and Pickled Onions. It’s all about the parboiling here, which renders the leaves silky smooth and tender. Mixed with avocado and set off by the bright, flavorful onions…it was pretty much the only thing I could talk about at the dinner table that Sunday night. (This in spite of a combined 2 assists and 1 goal involving a breakaway only a few hours earlier.) The other recipe is for kale chips which I found in Kim O’Donnel’s fun new Meat Lovers Meatless Cookbook. It takes about as long to make these as it would to go to the pantry and open up a bag of potato chips. They are simultaneously delicate and crispy and melt in your mouth in a way that almost reminds me of cotton candy. Phoebe wouldn’t quite give me that one, but she ate up the chips anyway. And then begged me for Skittles.

Kale with Avocado and Pickled Onions

For onions: In a small saucepan bring the following to a boil: 1 cup water, 2 tablespoons red wine vinegar, 1 tablespoons sugar, 1/2 teaspoon salt. Add 1/2 medium red onion (thinly sliced) and simmer for 15 minutes. Remove onions from pickling liquid with tongs and set aside in a bowl to cool. Meanwhile, remove stems and chop kale (I prefer Tuscan kale, but any will do) into strips, then boil (in water, not in pickling liquid!) for 2 minutes. Remove kale with tongs and add to the bowl with onions. (If you feel up to it, you can give the kale an ice-bath before you add to the bowl, to stop the cooking and preserve the deep rich color.) Toss with olive oil, salt, pepper, and 1 avocado, cut into chunks as shown in photo above. 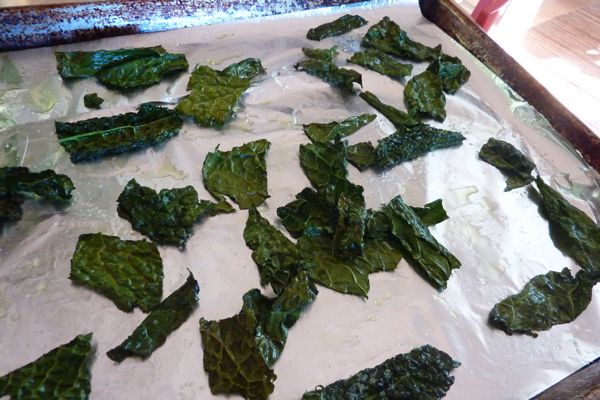 Cut washed kale (trimmed of stems) into bite size pieces as shown. Toss with olive oil, salt (I used sea salt), red pepper flakes (optional) and spread flat on a baking sheet. Bake at 350°F for 8 minutes. Keep an eye on them so they don’t burn.

Yay kale, but more critically, food sectioning awesomeness as shown above… from where does it hail?? it could be camping gear, neimann marcus??

Definitely going to make the kale chips. Maybe some curry ones? Excellent…..

So funny…I also just made kale chips in an attempt to counteract all the junk we’d been eating. Every time I make them I am shocked by how good (and easy they are). I will definitely have to try the avocado recipe!

I’ve never bought kale, but MUST buy it tomorrow! Thanks!

we love kale!! not sure where i got this recipe from but my kids have loved it from the age of 2 ( and they are not overly adventurous eaters):
– steam a bunch of kale (trimmed).
– while it’s steaming brown some breadcrumbs in butter.
– when kale is ready add to breadcrumbs and I add in a bit of olive oil, balsamic vinegar, fresh lemon joice, pinch kosher salt and pepper.
– fold it all together as it cooks another 1-2 minutes and that’s it.
We all love this dish, in fact I’ve served it at dinner parties to rave reviews as well.

Just tried the Kale and Avocado salad tonight and it was really good. My kids – who are usually not the biggest fans of kale actually ate some of it (of course I just called it avocado salad). Thanks for the recipe. Can’t wait to try the kale chips.

You NEED to try AOC’s kale recipe. It is like nothing else I’ve made with kale and since making it for a friend a few weeks ago, we have both been inspired to cook it about 4 more times between us. (I use whatever dried chile I have around and skip the rosemary.)

“I read your newsletter. Do I win the Inmod Teak Bowl?” that said, I chose this post because kale fries have become our favorite snack, thanks!

My family have just joined a CSA and we are expecting our first collection of veges to include kale, so I am excited to try out the recipes you’ve provided. Thanks so much!

This post has stuck in my head for the (almost) whole year since it first appeared. Last night I finally tried the kale chips and kale salad with pickled onions. Awesome! My husband had a regrettable experience with kale as a child (involving his well-meaning grandmother and, I suspect, some garden kale that was well past its prime). I never even encountered it as a child. Now my middle child and I are on a crusade to try out other kale recipes. Thanks for your great ideas and terrific blog.

ps. I brought the kale chips to my girl scouts who are working on a nutrition badge. Thumbs up from them as well 🙂

So, it’s the day after Xmas. I am pooped. Not cooking. But, my 14 year old son can make hashed brown potatoes. So I encouraged him to make them. He has almost burned them the last three times and this time refused to turn down the flame on our new gas stove. He got a teenager time-out (which for us means no electronics til he comes out of his room remorsefully). He eventually does and continued to cook his potatoes, on LOW, thank you. While he had his teenager time-out, I finished the last,last page (the acknowledgments) of the book, Dinner: A Love Story. This book fed me so much during times where I felt like my parenting wasn’t working. And it, of course, it inspired me so much. We have a jar of my son’s spice-mix – just like Phoebe’s, for his “burnt” potatoes. You have to start somewhere! Thank you, Jenny! As a teacher of young children for many years, I vehemently recommended this book to the parents this year, as a source for family comfort. I chronicle my own “sources of comfort” in guiding three year olds in my own blog, milestones-abc.blogspot.com. Very sincerely and thankfully, Jill

Wow, just made kale chips for the first time, and I am hooked! Delicious and so crispy!