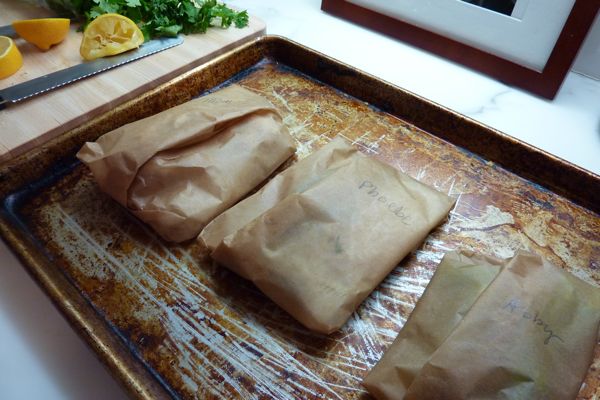 It didn’t take us long to figure out that, when it comes to rolling out a new product at the family table, so much depends upon the marketing campaign. I doubt our kids would have gone within a mile of cauliflower had we not first introduced it to them as “white broccoli.” They wouldn’t have sniffed brussels sprouts had we not sold them relentlessly as “baby lettuces.” Same goes for baked beans (“sweet beans”), bell peppers (“rainbow peppers”), dried cranberries (“red raisins”), and on and on. It’s the oldest trick in advertising and that’s not by accident.

Our latest venture in rebranding involved the kind of intimidating-sounding fish en papillote, which is just a fancy way of saying fish steamed in parchment paper. Neither description had a chance of flying with our kids. So we came up with something a little more intriguing. (Notice I did not say misleading.) Fish Presents, is what we decided on. Tonight we’re having fish presents! “Presents?” they asked. I gave them no further information.

The best thing about this meal is that you can chop everything ahead of time and then have the kids help you assemble and “wrap” the presents. So I sliced up 1 lemon and 1/2 a medium red onion, nice and thin, and 1 cup of shitake mushrooms. I boiled about 10 baby bok choy in salted water for two minutes, strained, and set aside. I poured 1/4 cup of olive oil into a small bowl and added a few red pepper flakes. Then the kids grabbed their stools, and we started the assembly line. Here’s how it goes:

You’ll need one square of parchment paper or aluminum foil per filet. (We used gray sole, but you can use any fish you want: Flounder, salmon, tilapia, sea bass, snapper, you can’t go wrong.) We laid the fish out on the paper, sprinkled with salt and pepper, and covered with thin slices of lemon and red onion. 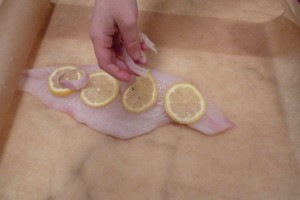 Next, we began layering on the toppings. First, the bok choy, then the mushrooms. We drizzled with the olive oil (with the red pepper flakes in it), added some parsley and chives, a few drops of dark sesame oil, and a final dash of salt. 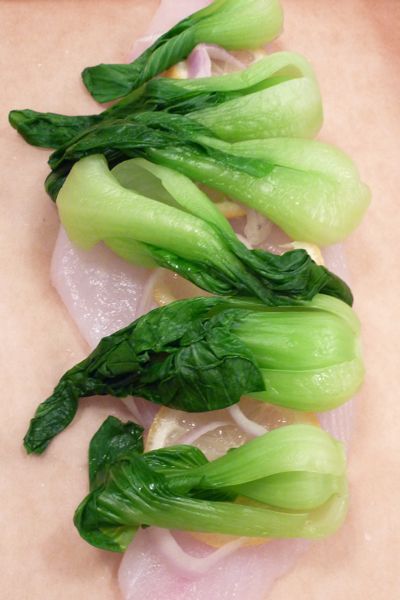 Finally, it was time to wrap the presents. Basically you lift the sides up until their meet above the fish. Turn down a few times and  fold the ends under the fish — picture the way the deli guy wraps a sandwich — creating a seal so the steam doesn’t escape. Slide the presents onto a cookie sheet, and bake in a 400°F oven for 20 minutes. (It’s hard to overcook the fish when steaming it like this.) Remove from oven and serve on plates. Happy birthday, kids! It’s…fish and cabbage! Be careful when unwrapping, though: steam is hot. — Andy 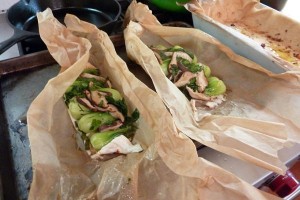 oh my god that looks so good, too bad half my family is fishophobic. maybe I could just do the veggies?

sal- of course you can do just veggies. That’s the beauty of this one — you can completely customize it up front so when you all get to the table there’s no complaining. in theory, at least.

yes! parchment paper cooks them wonderfully! i marinated a piece of Tilapia last night in a mixture of brown sugar (or honey), soy sauce and chopped garlic for about 20 minutes then wrapped it in parchment, baked at 350 for 15 minutes- and perfection! such a lovely, delicate flavor!

These look so good and easy! Even I could make this…thanks for sharing!