One summer vacation during my elementary school years, I went on an overnight boating trip across the Long Island Sound with my friend, Andrea and her family. Three decades later, what I remember most about the trip was not the exhilaration of being on the open water for the first time — man vs. sea and all that. What I remember was eating pasta with jarred tomato sauce (my first time ever; SEE: Italian Mother) while bobbing below deck, then feeling seasick until setting foot on land the next day. Andrea’s parents dropped me off at home, where I made a beeline for the fridge — you know that special kind of ravenous you get when you come home from the beach? That was me, and I hunted around for something to wolf down even though it was close to dinnertime, the gold summer sun sinking on the horizon, filtering light through the elm tree in our backyard. My mom told me there was some leftover tuna, so I grabbed the foil-topped bowl, mom handed me a fork, and I ate it in about two minutes while sitting at the kitchen table with her.

To this day, that right there is the gold standard that every tuna experience has to live up to.

My mom’s tuna salad was pretty straightforward as tuna salads go. I’m sure that particular one was like every other batch she whipped up for a brown-bag or quick weekend lunch — Bumble Bee Chunk Light Tuna in Water mixed with Hellmann’s. (And no, this post is NOT sponsored by EITHER.) There might have been salt, but there was definitely not black pepper — she isn’t a big fan of black pepper — and the ratio of mayo to tuna was probably on the high side. But what made it special, somehow, was the temperature. The tuna was cold — like really cold — and somehow two ingredients melded together to impart a third, mysterious flavor (childhood fridge? Mom umami?) that is impossible to achieve when I try to recreate it thirty years later in my own kitchen. I love tuna salad sandwiches, Andy and Phoebe love tuna salad sandwiches, we make tuna salad sandwiches all the time. But as good as they are — they always fall short. Always. (I keep making them, though, because I have to assume that I’m adding the same mystery mom ingredient to Phoebe’s lunch.)

That’s a long way of saying: the way I see it — if I’m going to make a tuna sandwich, the only way to avoid disappointment is to go in a complete and totally opposite direction. This past weekend, our friends Anne and Todd came over post-piano recital to celebrate our children’s most excellent interpretations of Mozart and Schumann. We all picked up some good tuna from the fish guy at our farmer’s market (and some hot dogs for the kids who wouldn’t go near the good tuna) and even though I had visions of going wild to celebrate summer, Andy convinced me otherwise (“this is not a performance!”), so we settled on an easy grilled tuna sandwich with salsa fresca and spicy mayo. Just because it was simple, though, and just because technically it was just a plain old “tuna sandwich,” does not mean it wasn’t the best thing I think I’ve eaten all year. Andy sliced the tuna horizontally so it was easier to eat on an open-face baguette, and we topped it with a cilantro-heavy salsa. It wasn’t my mother’s tuna, no. But why even try? 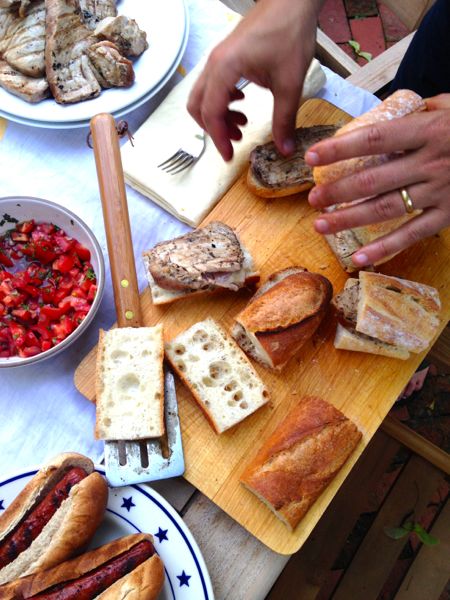 Grilled Tuna Sandwiches with Salsa Fresca
Makes 4 Sandwiches
The Oyster Bar in Grand Central makes a version of this sandwich which I highly recommend eating at the snaky counter with a  Coke on a summer day. We served ours with really fresh greens from the market that had been tossed with a rice-wine-vinegar based vinaigrette, and topped with peppery, edible nasturtiums from Anne’s garden. Andy made a farro salad and mixed in chives, feta, dried cherries, and a basic mustard vinaigrette. Todd made this crazy good smashed beet salad with yogurt. All in all, a perfect summer dinner.

In a small bowl, whisk together soy sauce, dark sesame oil, and pepper. Place tuna on a large dinner plate and pour marinade on top. Marinate about 15 minutes. Five minutes before you grill, squeeze lime juice over fish, flipping to fully coat. Grill over medium-hot coals for 1-2 minutes a side. (It’s cooks fast when it’s this thin, and we like it on the rare side.)

While fish marinates, make your spicy mayo and salsa fresca.

Slice baguette in half lengthwise, then into four sandwich-size pieces as shown. Spread mayo on each half, then top each half with tuna and salsa fresca. Serve open-face unless you like your sandwiches on the bready-ier end. (We do not.)

I know exactly what you mean. I can never recreate my dad’s tuna sandwich (or his eggs over rice with feta). But I’ve gotten into my own version, even though it doesn’t live up to his.

My oldest loves to eat the tuna salad straight out of the fridge. I love the thought of mom umami! This post really captured Summer, and sent me in several directions of inspiration. You’re good, you.

My mom always used tuna, mayo, and relish. If possible, it was my aunt’s homemade zucchini relish. I now make my with no relish and pepperoncinis and mustard and dill. So different and still so good.

What a fabulous idea… I love it! I love a good tuna salad… but nothing beats fresh grilled tuna. Thanks for sharing!

What an inspiring take on an old classic. I can’t wait to try making this summer. Thanks!

Love the twist! It looks delicious!

These sandwiches sound fantastic! I must admit that most of the tuna sandwiches I’ve had lately are classic canned-tuna melts, but grilling tuna steaks? YES. This needs to happen. 🙂

My mother in law makes an amazing tuna sandwich with tuna packed in olive oil on ciabatta bread with bel paese cheese, arugula and a little balsamic. Sometimes I add spicy peppers, because no matter what I do, it doesn’t taste as good as hers….

Freshly grilled tuna topped with cilantro heavy salsa? You must have topped it. That sounds like heaven.

Neither me nor my mom has an idea about how to make those tuna sandwiches but one thing is for sure that I love them. I think high time, I should try them and thanks for sharing the recipe, it looks easy and yummy 🙂

Wow. I thought I was the only person who felt that when someone else made tuna sandwiches (Mom) it always tasted better than when I made them. Mystery mom ingredient it is. Thank you for identifying it. I never make tuna sandwiches, but my mom does. Because they are perfect.

It looks good. I’ll definitely try making this for my boyfriend. He’s always treating me to nice restaurants. It’s time to give back. haha.