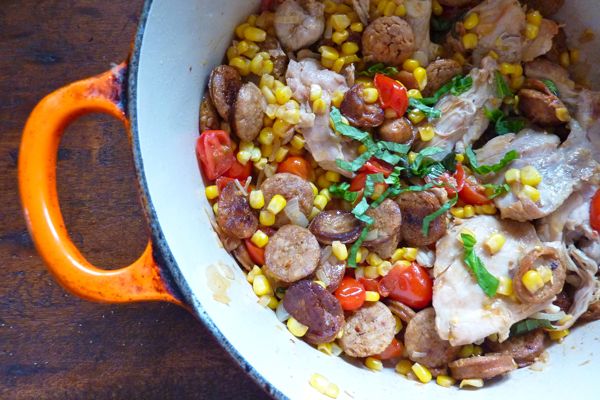 I should probably be stripped of my food blogging rights for telling you to do anything with summer corn besides eat it on the cob with a little salt and butter, but you know I can’t resist the urge to share the discovery of a new deconstructible dinner. Last week was not the first time we’ve eaten this corn, chicken and sausage stew — not by a longshot, we ate a version of it almost every August weekend one summer in the 90s. But since then, we’ve had to think a bit more strategically about dinner, which, of course, is another way of saying, we’ve become parents. I was happy to discover last week, that the family classic joins the ranks of the tortilla soup, the salmon salad, and the other dinners on page 158-163 of my book that can be broken down into their individual components so that they can be more palatable to the kids, and less headache-inducing for the cook. It’s a goodie.

Summer Stew with Chicken, Corn, and Sausage
Adapted from Gourmet

In a Dutch oven or large pot, brown sausage in olive oil over medium heat until crispy. Remove.  Raise heat to medium-high and brown chicken (in batches if necessary) on both sides until mostly cooked through. Remove. Turn down heat to medium-low, add onion, salt, pepper, pepper flakes, and a little more oil if necessary. Stir until slightly wilted. Add corn and tomatoes and stir until vegetables release their juices.

Nestle chicken and sausage back in the vegetables, cover and simmer another 5-10 minutes until chicken is cooked through. Serve with basil and crusty bread in bowls, or separate into individual components for the kid who doesn’t like things “mixed” and serve on a plate.

For some reason one-dish HOT meals are harder for me to come up with in the summer — this one sounds like a winner! Thanks.

So glad you posted this recipe! I just read about it in your book and was dying to find it!

Melanie – is it a bad sign that I don’t remember referring to it in the book at all?

Well, if you should be stripped of your foodblogging rights, I should too–on-the-cob is actually my least favorite way to eat fresh corn! This stew, however, both looks & sounds amazing. 🙂

Is there any liquid in this stew?

This looks like it would be a winner in our house. I am always looking for dinner ideas that all four kids will eat without having to make edits to the dishes, not an easy thing. They eat well, but four palettes are a lot to contend with.

I will give it a try once this heat wave breaks. With no air in our house I think the kitchen is about a hundred degrees.

just thought i’d share… sarah james (from ‘whoorl’) asked a question on her fb page regarding recommendations for cookbooks with healthy, simple weeknight recipes… out of the many comments, your book came up several times, and with great enthusiasm! up there in the ranks of mark bittman & everyday food! …very cool :).

I’ll be making this. It sounds easy, delicious, and pleasing/acceptable to the little people.

Jenny, that’s so funny! Because I just bought your book (which I love btw. As a mid 20s journalist who just moved in with her boyfriend in the NYC area and loves to cook, I’m finding a lot of parallels with your first section) and at one point I swear you wrote about a great corn and sausage stew that you or your husband had found in Gourmet and made all the time…

Nice! Just tried a version of this as my son was occupied playing with a friend. It’s been in the 90s here in Pasasdena, but your picture was enough to convince me to give this a whirl.

Thanks for the inspiration!

I just made this (if paying no attention to the proportions, adding some peppers and using full size tomatoes because that’s what we had counts as making “this”) and it’s amazing.

I made this last night – it was really good. Very summery, enough meat for the meat-atarians I live with, nice veggies for me. I served it with orzo, and some steamed Romano beans, which are my summer obsession. Next time I might add some garlic with the onions, to give it more depth, but I loved it. Jenny, I think I just need to buy your book, even though my son is now almost out of college – working is still working, after all, and it isn’t easy to come up with dinner every night, even for just the two of us. Promise me when your kids go to college that you’ll write a book about cooking for the two of you, after work!

You have just reconciled something deep within me that nags at my summer dinner menus. I am the kind of cook who, when thrown into the flurry of a busy day, tends to seek comfort in a pot. I take refuge in big pots of stew or bubbling soups. I sometimes feel feckless in the summer kitchen. Now, in this summer stew, I feel grounded again. I can go about my summer business and still have something waiting for me at the end of that kind of day. Thank you!

Jenny, when you say you used chicken for the sausage, do you mean chicken chorizo or just chicken sausage?

Lulu — either would work, but in this case I used chicken chorizo. Enjoy!

This is so good! My husband made it right after you posted it, and he’s been wanting to have it again ever since!

This sounds really good! But I have a question, is there a broth to this stew? It doesn’t seem so… so wondering if I’m missing something… Thanks!!

Just made this tonight…..delicious! I used andouille chicken sausage, and it was nice and spicy. I was also wondering about the lack of liquid in this “stew,” but it doesn’t need it. Thanks!

Decided to give this a try and now I wonder why the heck I didn’t do it sooner!

This is amazing! Great flavor, just a little spice, and with some chicken broth, just perfect.