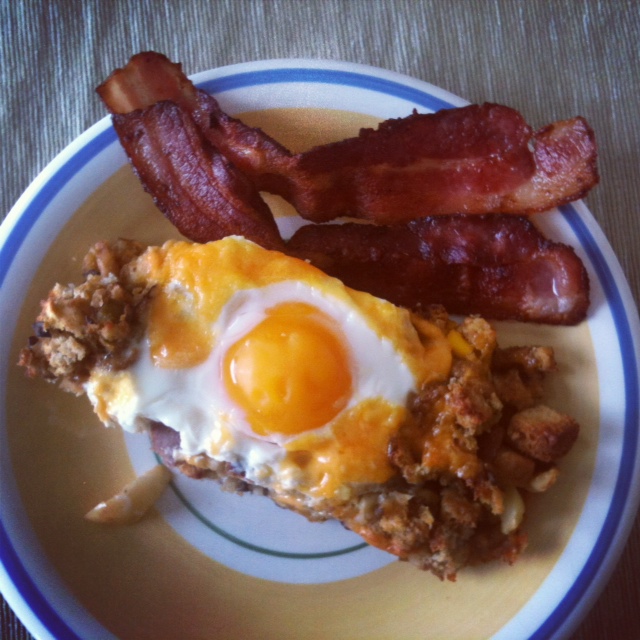 .
Today’s guest poster is Maria Braeckel, an excellent colleague of mine in the book world, and a true walker-of-the-walk when it comes to Sam Sifton’s Thanksgiving. For the past couple of years, Maria has cooked her through (and sent me photographs of) a large portion of the recipes in this book. Now, with an assist from Sam, she tells us how to handle the morning after — and to start chipping away at that mountain of leftovers. Beats the heck out of Honey Nut Cheerios, I’ll say that much. Tell it, Maria! — Andy
.
Last year, I spent Thanksgiving at the home of my boyfriend’s second-cousin-once-removed – yes, I know that sounds crazily distant, but his family is close like that — in Newport, Rhode Island. Conor had always wanted me to visit Little Rhodie, partially because he spent a lot of time there when he was younger and partially because, as a native Kansas Citian, I thought for an embarrassingly long time that Rhode Island was actually an island. (I’d feel worse about this if I’ve heard enough snark about the Midwest from Northeasterners to know ignorance is a two-way street.)

We arrived Thursday afternoon and, after a quick driving tour of Newport’s famed mansions, showed up at Cousin Kira’s for the big meal. Kira brought it, big time: magazine-cover-perfection turkey, endless trays of stuffing, homemade cranberry sauce, rich, salty pan gravy, and, best of all, Conor’s mom’s Italian sausage bread. After dessert, instead of lowering ourselves into bed like we should have, we went out to grab “a beer or two” on Thames Street and watch the Jets play the Patriots. (We were promptly greeted at the bar by endless replays of the infamous “Mark Sanchez butt fumble” and relentless ribbing from the Patriots fans lining the bar.) Several Guinnesses later, we crashed at Kira’s, but not before treating ourselves to some leftover turkey, straight from the Ziploc.

I’ve always been a sucker for Thanksgiving, but the truth is, the day after is my favorite part of the holiday. All those leftovers, all those possibilities: turkey and cranberry sandwiches, slices of turkey dipped in a mixture of mayo and soy sauce (trust me), pie for breakfast, cold stuffing. And having worked with Sam Sifton on his book, Thanksgiving, I’d been obsessed with trying his recipe for Thanksgiving eggs – as Sam says, everything is better with an egg on top, stuffing included. So that morning, while Kira prepped the caffeine I.V., I got to work.

I’ve always loved the yin and yang of stuffing’s crunchy, toasty top and its moist, gooey interior, and this recipe takes that quality to the next level. Here’s how to do it: Liberally butter a baking pan, spread the leftover stuffing into it, and use the back of a spoon to make 4-6 indentations. Pop the pan in the oven at 400°F for 15 minutes. Take the pan out, crack eggs into the indentations, and sprinkle some cheddar cheese on top.  Return pan to the oven until the eggs are set, about 8 to 10 minutes, and serve with good bacon and a drizzle of warm gravy.

When Conor’s mom and stepdad came to pick us up, sleepover-style, and saw the remains of our breakfast, they were jealous. Lucky for them, we’ll be serving this again – and not just at Thanksgiving. That’s the thing about stuffing, and these eggs: they aren’t solely for the fourth Friday in November. One of the things I love about Sam’s book is that his recipes have served me beyond Thanksgiving season — his Brussels sprouts, roasted cauliflower, green beans, apple crisp, and pear cobbler. The stuffings in Sam’s book are appropriate year-round as a (freezable) accompaniment to roast chicken or pork chops, which means you get to have these eggs the next morning…no matter if you’re in the Ocean State, the Show-Me State, or a hungover state.

Oh my! This breakfast looks absolutely delicious. Never thought of stuffing for breakfast but with eggs and bacon? It’s a must try.

Thank you for giving a shout out to Thanksgiving leftovers! This blog has been like one long pep rally for the main event, and I’ve enjoyed every post. One week to go!

Salivating. Yum! Read Sam Sifton’s book in one sitting on a warm June day. It’s now on my bedside table. Cannot wait for Thanksgiving. Just hope my baby arrives either before or after the big day! # newslettergiveaway

Can’t wait to make this next Friday!

….in all seriousness–I might have to make these *before* Thanksgiving just to experience this goodness and pick up Sifton’s book in the meantime…sounds delectable!

I want the recipe for Conors mom’s sausage bread! Sam Sifton’s book rocks and I plan on making his apple pie this year!

Totally doing this next Friday or after my next hangover…whichever comes first!

I can’t get over the title. Perfection…!

My favorite part of Thanksgiving is the leftovers, too! This looks amazing.

Wait…can you enter the #newslettergiveaway on multiple posts? If so, I missed that little tidbit.

Anyhoo, emailed this to my husband as soon as it posted. We are TOTALLY making this on the day after. Sounds unreal!

We do this! In our house, ALL of the leftovers get pulled back out morning-after… We use individual-sized baking dishes so that everyone can make their own custom mix, crack an egg on top, and in to the oven they go! So good…

This has become one of my favorite post-Thanksgiving (or anytime I make stuffing) meals.