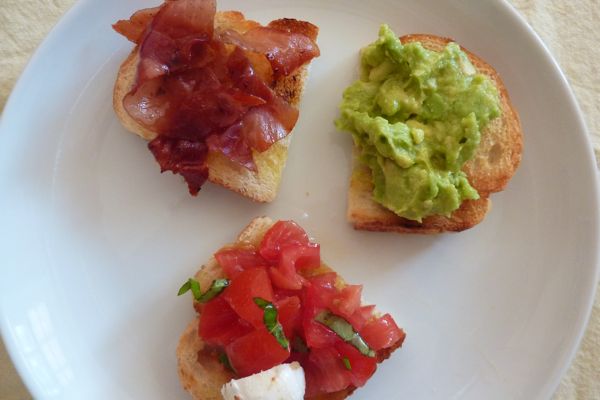 1. Because it’s arguably easier and faster than cooking up another pot of Annie’s Mac & Cheese.

2. Because the afternoon birthday party served pizza at 4:00. (What is up with these parties? Will someone please enlighten?)

3. Because the clock is ticking and the kids won’t be awake by the time your dreamy white wine sauce has reduced.

4. Because you live in Dallas, I mean New York, where the hot-and-humid and over-90 degree heat has been oppressive for two weeks straight. Nothing appeals to you – least of all the act of turning on an oven.

5. Because you’re going away for the weekend, there are only scraps in the fridge, and you can’t deal with breaking out pots and pans and baking dishes.

6. Because you’re back from your weekend away, there are only scraps in the fridge, and you can’t deal with breaking out pots and pans and baking dishes.

7. Because you have lettuce that is about to liquefy, beautiful fresh summer zucchini that sits there taunting your lack of culinary imagination, and a loaf of bread that will be mistaken for your son’s baseball bat if you don’t rescue it soon.

8. Because the house was just cleaned and you would like to freeze the kitchen in its rare state of cleanliness for as long as possible.

9. Because it’s an easy-to-assemble, legitimate dinner that can be customized for a wide range of picky palates and a wide range of unpredictable schedules, i.e. if one parent is coming home later than the kid’s dinnertime, the serve-yourself toppings will save the cook from another round of cooking.

10. Because it’s Monday…Why the hell not?

Cheater’s bruschetta toasts: Toast bread. While still warm, rub it with a halved garlic clove and brush on a bit of olive oil.
Real bruschetta toasts: Cut bread into semi-circles as shown. Brush one side with a little olive oil. Toast on a grill or a grill pan for about a minute on each side until you see grill marks. Remove and rub with halved garlic clove immediately.

Topping suggestions: Smashed avocado with salt; chopped tomatoes mixed with olive oil, basil, salt, pepper, and the dashiest dash of balsamic vinegar; fried prosciutto with cantaloupe shavings and a few drops of balsamic; smashed hard-boiled egg; the last few pieces of lettuce that you were about to throw away, tossed with with feta and tomatoes, red onion, oil, and vinegar; sauteed zucchini shreds tossed with mint, and topped with a dollop of ricotta; caramelized onions; halved bocconcini with caramelized onions (saute onion slices in olive oil over low heat for anywhere from 15-45 minutes — they just get sweeter the longer you cook); whatever came home from camp in the lunch box that is still edible.

Set three or four bowls of assorted toppings on the table with a plate of toasts. Let each diner assemble his or her own.

So cool. I just discovered your site. I can’t wait to try this out. I’m so tired by the end of the week—-this might be my Friday night idea.