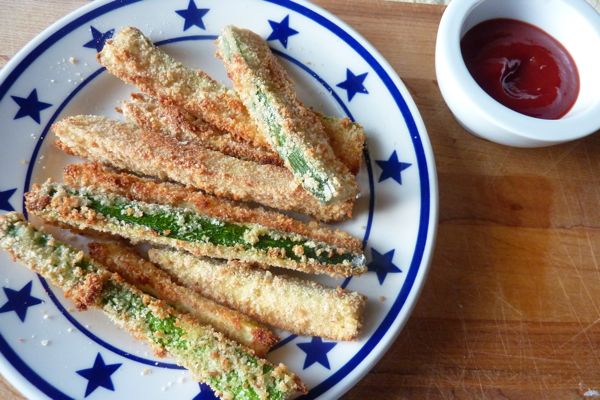 When her daughters were little, my friend Frances somehow convinced them that green beans were related to French fries. She called them Green Fries. I was so jealous — my kids had been to too many restaurants with Kidz menus by that point to be suckered by what seemed like unbelievably JV kitchen trickery to me. If my kids (and most kids I imagine) were going to eat a healthy vegetable disguised as a French fry, the recipe would have to be kicked up to varsity levels. These crispy, golden Zucchini fries fit the bill.

One thing: I advise making them on the weekend or on a weeknight where you’re not up against the clock. (Stop laughing.) I don’t mind the laborious dredging-and-dipping process on a weeknight if it’s for the main part of the meal (like chicken fingers, for instance). But I find it kind of a drag for just a side dish. You might feel differently, in which case ignore.

Preheat oven to 400° F. Cut and slice 3 zucchinis into sticks as shown. In a medium bowl, combine 1 cup unseasoned bread crumbs, a dash of cayenne, salt and freshly ground black pepper. Place 1 cup flour in another medium bowl and 2 beaten eggs in a smaller bowl. Dip the zucchini sticks first in the flour until lightly coated, then in the eggs. Roll them in the bread-crumb mixture until well covered. Transfer the zucchini pieces to a baking sheet lined with foil and bake until they look crispy and golden, about 20 minutes. (Sometimes I give them a quick shot of cooking spray at the end if they aren’t browning to my liking) Serve with ketchup.

I am going to try this. My 4 year old has outgrown any sort of trickery and my 15 month old just has vexing food preferences (namely all bread all the time). I have some yellow summer squash in the fridge right now in fact. YellowSummerSquash Fries seems a laborious title,though, perhaps I’ll just go with Summer Fries.

i love the name “summer fries” rebecca. I just got some zucchini at the farmers market this morning….so I am sure to make this tonight. I also think I might pass this off as the main dish on meatless mondays (that is not going over well in my house) ala chicken fingers but not. Anyway, we will see how it goes.

yum!! my kiddo won’t eat french fries (i know, i know, what’s wrong with him??), or zucchini, so i have no faith that the combo would work for him, but they look so wonderful that i’m tempted to make them just for me!

Just found you after the NYTimes piece — feel like I’ve found my soulmate (‘sole’ mate?). Working mom of two little girls who know their naan from their crepes and regularly request penne alla vodka, but at a price.

This is a really wonderful idea, which we’ll be trying out immediately (like tonight, seriously). We also do tofu fries, which none of us can get enough of. Cut and dry a brick of firm tofu on paper towels, dredge in corn starch, sesame seeds, salt and pepper, and then fry in a little oil. We eat them with peanut sauce “ketchup”. Can provide a more detailed recipe if you’re interested… Great source of protein and absolutely delicious.

Sounds great! My dd is only 16 months old and not *too* picky yet! I think she would really like these!

Try these with blue cheese dressing (seriously), or marinara sauce too. Decadent!

We serve these with a little parmesan cheese on top after baking then dip in ranch dressing. Yummy!

I wonder what other veggies you could do this with… maybe some sweet potoates (parboiled first?), eggplant, carrots (parboiled too?). Sounds delish!

I made something similar once but it had parmesan mixed in with the bread crumbs… can’t go wrong there! :>) I linked to this on my weekly roundup, post is under my name. Thanks for sharing!

Neat recipe. I’m going to give it a try too. When you don’t have time, our health food store has sweet potato fries (I think the name brand is Alexa) that are frozen. They are delicious and tons healthier than regular fries.

I eat these all the time when zucchini is in season. I dip them in Ranch dressing and it is delicious.

So much zucchini from the garden – we’ll have to try this!

Allo allo homo erectus! Pleasant web page, even though definitely not all is working correctly! But hey that is definitely up to this owner to correct … But anyway, I recently came across this intriguing site which claims that the most fitting people are people that were born on the same date. Also, they state that folks with birthday on the very same date are exactly the same! I think that’s crazy and it seems like bs in my opinion. Just wanted to reveal to you because if that is correct then would you consider the effects of this research? Check it out.

I read your newsletter, do I win the Franny’s cookbook?

There are so many great ways to use up zucchini. I can’t wait to try these baked zucchini fries.