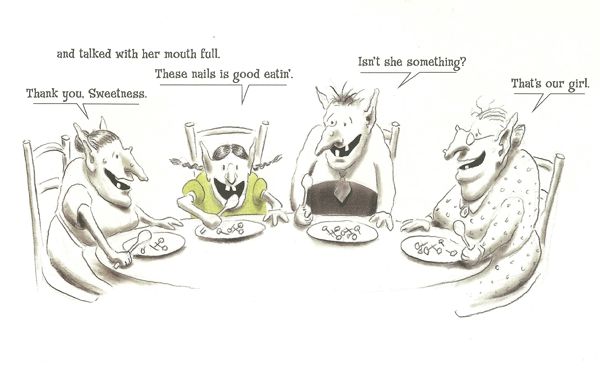 For a bunch of years when I worked in magazines, I was lucky enough to have the chance to work with David Sedaris. For an editor, this was like being a baseball-loving kid and having had the chance to be the bat boy for Lou Gehrig. (Or maybe that’s not the best example here, but you get the idea. It was, as Abby would say, a priv-uh-lege.) Anyway, those years were some of the best and most fun I ever had, professionally — and personally, too, as David proved as kind and generous a person as he was talented as a writer. A few months ago, we had him over for some dinner (we made a version of our yogurt-marinated chicken) and he arrived with gifts for the kids: bottle-shaped candles, magnets that looked like leaves, chocolates, Japanese note cards, and two books: Strange Stories for Strange Kids and It Was a Dark and Stormy Night. They’re two parts of a remarkable three-part series, called Little Lit, which was edited by the great Art Spiegelman (of Maus fame) and his equally talented wife, Francoise Mouly. As much as the kids liked their candles and magnets, it was the books that really stuck: particularly since one of them contained a story by David, illustrated by the Olivia guy, Ian Falconer. (The simple yet genius idea of these books was to pair well-known writers and well-known illustrators and then…ask them to create something strange and wonderful. The table of contents alone offers some absurdly high-density creativity: Jules Feiffer, Barbara McClintock, Lemony Snicket, Maurice Sendak, Neil Gaiman, William Joyce, Richard Sala, Chris Ware, etc.) David’s story is called “Pretty Ugly,” and it is both strange and wonderful. Here’s how Phoebe describes it: “It’s about a girl named Anna Van Ogre, and she lives in a world where everything is sort of backwards. Like, you’re pretty if you’re ugly. These people don’t look like people; they kind of look like trolls mixed with pigs.” It sounds weird, and it is. And that’s also why our kids love it. They wanted to ask David some questions about how he did it, and what it all meant, and what he liked to read as a kid, and if he has plans for more kid stories. He was kind enough to oblige. — Andy

Phoebe: How did you get the idea for Pretty Ugly?

David Sedaris: I like the idea of a world turned upside. In the U.S., for example, straight teeth are considered attractive while in Japan a woman is considered much prettier if her teeth are jumbled and crammed into her mouth at odd angles. In Africa, it’s considered beautiful to have holes the size of dinner plates in your ears while in the US, most of us find that pretty creepy. It all depends on which culture you were raised in. In the ogre culture of Pretty Ugly, being cute means being hideous, and in ours it’s just the opposite.

P: How did you get someone as famous as Ian Falconer to do the illustrations?

DS: It was Art Speigelman’s plan to combine writers with illustrators. Well, his and his wife’s plan. Her name is Francoise Mouly. She is the art director of the New Yorker, and a co-founder of the group that put the book together. That said, Ian and I already knew each other. He did the sets for the original New York production of “The Santaland Diaries.” I remember going to his apartment  one day and seeing these great drawings of a pig. He told me that he had a three year old niece named Olivia, and that he was thinking of writing a children’s book about her. That book, of course, became Olivia.

P: What was your inspiration for this story?

DS: I’d never tried anything like this, so when Art invited me to do it I said yes. “Pretty Ugly” was my third or fourth idea. I don’t now remember what the other ones were, but this one ultimately made more sense. When I was young, whenever a kid made an ugly face, his parents would warn him that if he didn’t quit, his face would stay that way. I like it when the girl turns inside out. It seemed that that might be a fun thing to draw.

P: What kinds of books did you like when you were a kid?

DS: I liked biographies of famous people. It didn’t matter who it was, if he was famous, I’d check his biography out of the library. What always surprised me was the person wasn’t born famous, or born knowing he’d be famous. Abraham Lincoln or George Washington of Daniel Boone — they were just normal people until lightning struck.

And now Abby has a few questions, too:

Abby: Did you tell Ian Falconer what to draw, or did you give him the choice?

DS: I’d never tell Ian what to do. He’s the artist, and because he puts a lot of thought into what he does, I can automatically assume that his visual ideas will be better than mine. Ian illustrated my last book, Squirrel Seeks Chipmunk, and again, I never made any suggestions.

A: What is the moral of your story?

DS: When nothing else works, you need to go that one extra mile.

A: Do you think all kid stories should have morals?

DS: It’s nice when it works out, but I don’t know that a moral should always be imposed. Some stories are simply meant to be entertaining, and not necessarily enlightening. Does Stuart Little have a moral? I don’t remember.

A: Why don’t you do more kids books?

DS: I just did this one because Art asked me to. Aside from you and Phoebe, I don’t  know too many children. What people your age want is a complete mystery to me. That’s why I gave you those candles shaped like bottles. What do I know?

You have some lucky girls! I LOVE David Sedaris. I think I’ve read every one of his books (Me Talk Pretty One Day is my favorite) and i can’t beleive I didn’t know he wrote a kid’s book! Thank you for writing this post!

This is awesome, I love David Sedaris!! Now I want to pick up this book. I can’t believe you got to work with him (and eat dinner wit him!), so jealous.

Wow. Do your daughters even know how lucky they are? To have him just sitting at their dinner table… incredible! A friend had David sign her book at a book reading of Me Talk Pretty One Day and he signed it, “Dear Kirby – Thanks for making me rich! David.” He’s a keeper!

Love the book, too. I am going to check that out for my son.

I can’t believe you got to eat dinner with David Sedaris!! One of my all time favorite books is “When you are Engulfed in Flames.” Read it on a family vacation and had to control my outbursts of laughter on the beach. Love his stuff. Great post!

Your children might just be the coolest kids ever. I hadn’t heard of Little Lit but now I know what to add to the pile of Christmas present books for my nephew!

Your girls are going to be good journalists someday . . . although it appears that they already are.

I just recently saw David on stage in Portland, OR and it was an amazing experience. I can’t imagine having the opportunity to have dinner with him…what lucky kids! This sounds like a great book to have on the shelf!

I am insanely jealous that you get to interact with David on a personal level. I find him intimidating and charming all at once. How sweet he is to your very entertaining children!

Ps. Thanks for the xmass gift ideas. My nieces will be tickled by these books.

David Sedaris is favorite! Wow! If you would ever dare venture to ask the question…Think David Sedaris would do a Fave Five list? He must have some things quasi appropriate for the under 10 set….emphasis on quasi

Ummmm…Hello – I am not sure if you realized that you said “A few months ago, we had [David Sedaris] over for some dinner (we made a version of our yogurt-marinated chicken) .” I am sorry, but that is somewhat analagous to saying – “Hi, I just had Obama over for a beer. Did you know he is an amber drinker?” Jest sayin’….you are hanging out with GOD!

Wow. I think that when a post is about dinner with David Sedaris, your blog has gone to whole other level. Perhaps your girls can interview Michael Chabon about his newest kid book? Are you friends with him, too, by chance? They could do a whole series on writers who try to write for grown ups and kids.

What a cool experience! And what poised interviewers.

That is so amazing, so awesome and I am totally jealous. Do you know how I could be David Sedaris’ best friend?

What an experience for your family!

You had David Sedaris to your house? LUCKY! I had to put Me Talk Pretty One Day away because I was laughing so hard whilst reading it that people were moving away from me on the subway.

Awesome, delightful and hilarious! Thanks for sharing this “interview” and letting me know about the books — what an incredible artistic pairing!!

thank you for validating my lunch making quandries! i have been wanting a bento box for my kids’ lunches for years. bought 2 online for $70 only to have my husband gasp in horror at the price…alas i decided to return the bentos…

love david sedaris! thank you for your great posts.

What a dream come true! I would die if David Sedaris came to my house!!!!
I adore him, well maybe worship him, have read all of his books, seen him live, and will now be running out to get this book. Thanks for sharing.

Oh, my. I’m so jealous. Whenever I go hear David Sedaris at UCLA (nearly every year), I always leave wishing he were my “real” friend. Somehow it doesn’t surprise me that you would all be friends — more reason to come back and visit your terrific blog!

Yeah, I thought you were somewhat “regular” people, but now I realize you are celebrities. I almost have tears in my eyes I am so jealous.

I too am horribly jealous! But also really excited to find out about the Little Lit series – sounds like a great way to introduce my young readers to one of my favorite authors!
Also:
Do I win the GetMaineLobster.com feast??

David Sedaris has the incredible gift of hooking you into the story and keeping you in his grip. Can’t wait to fly home, get the nightgown on and sink into the story. No doubt his children’s book will be a fun, humorous take on the human condition too. My fav. so far, is Squirrel Seeks Chipmunk. Beautiful, genius balance between the sentimental and side splitting funny. Is the world not a better place for having David’s wonderful stories ??

That is so dang funny! David always makes me laugh out loud. A big huge bray/whinny of a laugh. His comments remind me of one of his stories about his niece, Roosters’ daughter, and how the Sedaris family were inept at finding legitimate gifts for infants (especially compared to her mothers family)…as in David (or maybe Amy) pointing out that the cashmere baby sweater has a removable fur collar….