Meet Pablo. He’s lived in our house for so long that I forget most of you probably know him already as the beloved bow-tied ringleader of The Backyardigans. When Phoebe was little, she and her sister were obsessed with the show, about five friends seeking out imaginary adventures in their backyard, breaking into song and dance routines as they do so. Those songs! Wow. How do I even reckon with them? For three years, they were the soundtrack to my life, a never-ending loop on the car’s DVD player and in our collective family brain, following me everywhere. (I remember playing the punk-inspired “Soccer Monster” for a co-worker and saying to him, “How good is that? I mean really good, right?”)

During this period, when Phoebe was four or five, and about as deeply tunneled down the Backyardigans rabbit hole as a kid could get, we gave her a stuffed Pablo for Christmas, the little guy you are looking at above. She slept with him that night, and the night after that, and the night after that, and the years and years that followed. Even as she moved on to SpongeBob, iCarly, Gilmore Girls, and, these days, Lost she never moved on from her sleeping companion. Pablo the Backyardigan became her First Official Lovey.

The guy has had a few rough patches: He lost his signature bowtie and propeller cap in a washing machine incident, and a 2013 ambush by the family dog left him a one-legged amputee. (There was one successful operation, but then another terrier attack, and now we are waiting for the surgical team to procure the right color suture.) For the most part, though, Pablo has led a pretty enviable life: sleeping next to someone who loves him every night; regularly hanging out with celebrities like Tintin’s Snowy and Calvin & Hobbes‘ Calvin; and once, back in 2011, even traveling overseas with the family. “He’s always wanted to see England,” a 9-year-old Phoebe told me earnestly when I expressed my shock over Pablo venturing out of the house for the first time ever.

All this by way of explanation for the inevitable mortifying moment when someone discovers the above framed watercolor portrait on Phoebe’s dresser. Actually it’s not there yet. I’m giving it to her for Valentine’s Day. (Shhhhhh!) Seriously, what better holiday to commemorate the role of a lovey? Specifically when it’s your kid’s 14th Valentine’s Day, and when you feel as though her First Official Lovey’s days may perhaps be numbered due to forces more powerful than a 16-pound Boston Terrier. Aka, high school.

I am not the first one to come up with this idea. When I was a magazine editor, someone wrote about hiring a painter to create formal portraits of their kids’ most prized stuffed animals. The idea of a teddy bear “sitting” for a formal portrait had me in stitches, even as I mercilessly mocked the whole thing. A FORMAL PORTRAIT! Who on earth would spend money (let alone time!) on painting a dumb toy?

That was before my parental forgiveness muscle was properly developed and before I knew my kids would actually grow up. It was also before my friend Robin introduced me to the Waterlogue App ($2.99!) which transforms any photograph into a watercolor painting with the swipe of a finger. (For a Christmas present, Robin had done this with a photograph of her father’s house, then printed it on heavy stock for personalized notecards. Genius!) So last weekend, while the girls were out, Pablo and me? We had a little photo shoot. I selected the best shot, Waterlogued it, printed it on felt paper (Via brand), then picked up a frame at Marshall’s for $3.99. Cute right? I just hope Snowy’s not too jealous. 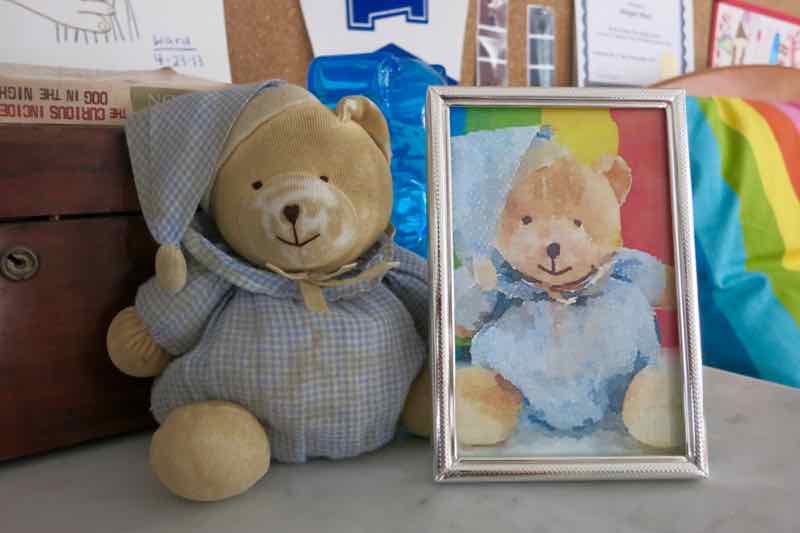 “Hey, why should Pablo have all the fun,” says our old friend Luca Bear (Abby’s Lovey, ca. 2003). Wouldja look at that well-loved face?

Oh I love this … must do for my kids.

Tears to my eyes. In our house, Monkey is the special guy. Chosen when my daughter was 18 months, he looks as loved as anyone does 8 years later. When Ella went to sleep-away camp for the first time last summer, my deepest fear was not that she’d starve or grow homesick but, rather, that she’d lose Monkey. To avoid this tragedy, we came up with a plan with her counselor to keep him safe. I digress, this idea is the sweetest valentine.
P.S. The Volcano Sisters! Huka Pele, Huka Pele, HuHuHu!

Oh, I really do love this idea. So precious. And, yes, I recognized Pablo right away!

I have done photograph portraits of the boys with their respective lovies, but I love this idea, too! Bonus: I already own the app. Thanks for the idea! (BTW – Racing Day is a motivating song when you’ve got work that needs doing, as is Go Go Go — particularly work that isn’t awesome, like moving or painting. 🙂 )

One of my favorite things my wedding photographer did was take an unbeknownst-to-me series of portraits of my dear Bunny (http://www.acarrollphotography.net/2013/11/megan-matt-wedding-preview-detroit-wedding-photographer/). I had no idea at the time, but when I saw the pictures I was so touched!

Oh my word… this need to happen for Sharkey and Elephant and Puppy in my house… Thanks for the brilliant tip!

Love this idea! Thanks for sharing – I need to do this for my kids’ loveys (and I too panic every time they leave the house and my kids are 9 and 12).

I love everything about waterlogue, thanks for the reminder I need to play with it some more!

Lady in Pink. All time fave. How good is that? REALLY good, right? So good. Thanks for the memory inducing post!

I hope this isn’t the case for your very thoughtful gift, but I don’t think an image is going to be as loved.
This is my favourite quote from The Velveteen Rabbit, which seems appropriate:
‘Real isn’t how you are made,’ said the Skin Horse. ‘It’s a thing that happens to you. When a child loves you for a long, long time, not just to play with, but REALLY loves you, then you become Real.
Does it hurt?’ asked the Rabbit.
‘Sometimes,’ said the Skin Horse, for he was always truthful. ‘When you are Real you don’t mind being hurt.’
‘Does it happen all at once, like being wound up,’ he asked, ‘or bit by bit?’
‘It doesn’t happen all at once,’ said the Skin Horse. ‘You become. It takes a long time. That’s why it doesn’t happen often to people who break easily, or have sharp edges, or who have to be carefully kept. Generally, by the time you are Real, most of your hair has been loved off, and your eyes drop out and you get loose in the joints and very shabby. But these things don’t matter at all, because once you are Real you can’t be ugly, except to people who don’t understand.”

What an insanely wonderful suggestion! All of my kids have stuffed animals, but none of them have reached lovey status. My adult brother had a turtle-y, who was much beloved. Like Pablo, he suffered an injury (lost an eye, had to wear a patch), but he’s still going strong as my nephew’s friend. I think this would make a great belated birthday present for my brother and might give the rest of us a little fun at his expense. (Everyone wins!)

Wow I’m going to do this with a picture of my dog!

This post made me so happy and sentimental. I have a snowman that I got for my 5th birthday. He travelled everywhere with me (friends’ houses, vacations, everywhere). He is threadbare and yellowed. And though there was a phase when I thought I was too cool to actually sleep with him, I’ve never let him go. Although, once I got to college the travel back and forth was taking its toll on his 13+ year old self. So my mom bought me a new one. And I cried, because I thought I was replacing him. However, my old faithful one resides at my parents house, where he is dearly loved when I return home. And the newer (but now 7 year old self) one sleeps with me every night.

This is SO cute! I love the idea.