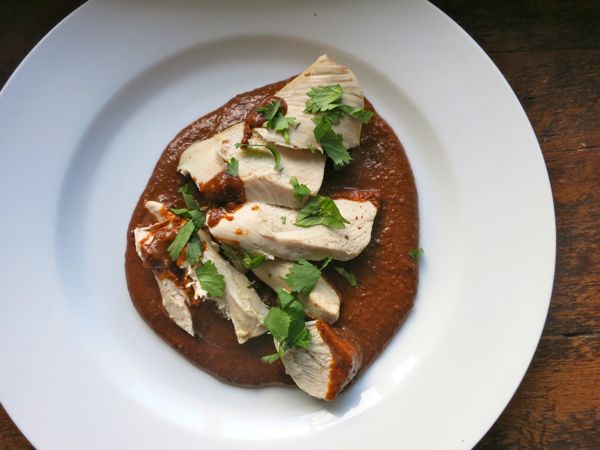 In my next book — which you’ll be hearing about shortly — there’s a whole section on recipes I call “Keep the Spark Alive” dinners. These meals are the opposite of what we make on, say, a Tuesday night, when efficiency and convenience are the most important ingredients. In some ways, they are the opposite of the DALS mission in general. But that doesn’t mean they aren’t every bit as important, especially when we are talking about the psychological health of a family cook. Think of it this way: If Pretzel Chicken and Beef and Broccoli stir-fries are the workhorse recipes, the ones that get me through the week day in and day out, “Spark” meals are the ones that remind me why I love to cook in the first place. They call for ingredients I’ve never used before and usually require a big chunk of luxurious time. Marcella’s Bolognese is a good example of a Spark dinner, so is Andy Ricker’s Pad Thai. And on this dreary New York morning, I’m pleased to announce, I have a new one to add to the list.

It started with Uncle Mike. At our annual Christmas Eve dinner at his house this past year, he served, among a dozen other things, the most amazing Chicken Mole. 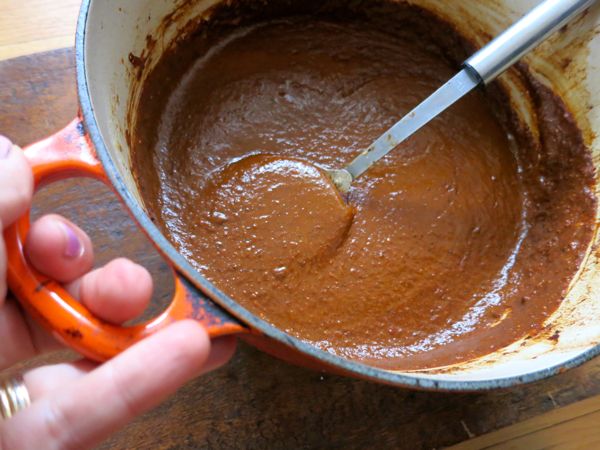 The chicken was tender and stewy, the sauce was rich and deep, but not overpowering like some versions I’ve tasted in the past. The kids, skeptical at first, cleaned their plates. It was December, which meant by that point in the winter, I had eaten my fair share of braised short ribs at dinner parties, so part of the novelty of this meal was the fact that I was I dining on a hearty, warm-your-bones chicken-based main. Except for maybe Julia Child’s Coq au Vin, I don’t have a whole lot of those in my repertoire that would earn their keep on a holiday spread.

“How’d you make your mole?” I asked Mike. Only someone who has never made mole would broach the subject so innocently.

He gave a little knowing “Ha” before replying. Mike, an ambitious home cook who grows a dozen varieties of chile peppers in his backyard, and sends us a care package of home-dried Persimmons every November, is not one to shy away from an recipe that might call for pasillos, mulattos, piloncillo, and bolillo.  “It’s a Diana Kennedy recipe, and it’s been days in the making.”

When I hear the name Diana Kennedy, I mentally turn the page. Diana Kennedy, as I’m sure you know, is one of our country’s foremost authorities on Mexican cooking. Because everyone has told me as much, I have a bunch of her books, and yet, whenever I crack the spine on one, determined this time to conquer at least a simple recipe, I remember: There is no such thing — and as with anything authentic and memorable, there probably shouldn’t be. The recipe Mike used was from Kennedy’s definitive Oaxacan cookbook, but a few days later, he emailed me another, slightly simpler Mole Negro, that looked similar. Mole Negro is one of dozens of versions — it’s the darker kind that incorporates chocolate — and he described it as “traditionally the most difficult.”

I looked at the recipe. Twenty-nine ingredients, half of which would require some scavenger hunting in Mexican markets around the county.  I filed it under “Another recipe, for another kind of cook.”

But damn that mole was good! It stayed with me all winter, and last week, when I was calendarizing (defined as The act of staring at your family’s schedule to see how you can squeeze some real life in between all the activities) I noticed a nice long empty weekend afternoon and evening. It was going to be our last Saturday without soccer until July, no one was coming over, and just by chance, that morning Abby had an orchestra concert a short drive away from a stretch of awesome Mexican grocers.

Mole was calling, and I needed to answer.

I’m going to make this happen, I told myself. But not before first checking How to Cook Everything to see what Bittman had to say. Naturally, the former “Minimalist” columnist acknowledged the complexity of the dish, but offered up a turkey mole that he said was easy and accessible enough to cook on a weeknight. That sentence is like DALS kryptonite, and it took everything in my power to press on. This was not a weeknight. This was not about accessibility. This was about injecting a little bit of adventure into the pasta-and-pizza loop. In search of something in between Bittman and Kennedy, I asked my friend Dana if she had a good mole to recommend. She emailed me Pollo en Mole Poblano, saying said she’d never made it, but had eaten it — and loved it –at many dinner parties. I was sold. 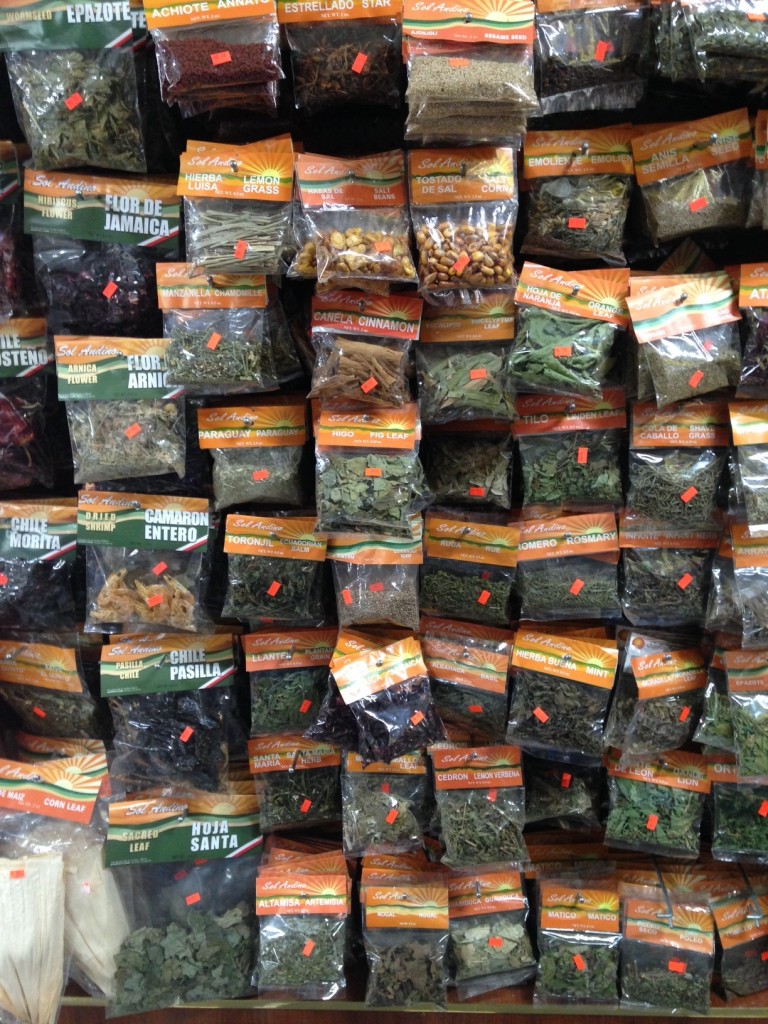 I’m so glad I stuck with the plan. Because it gave the family an excuse to explore a Mexican market we’d never been to before (Locals: this photo was taken in La Placita in Port Chester, but there are many others along Main Street) to track down some hard-to-find spices and chiles… 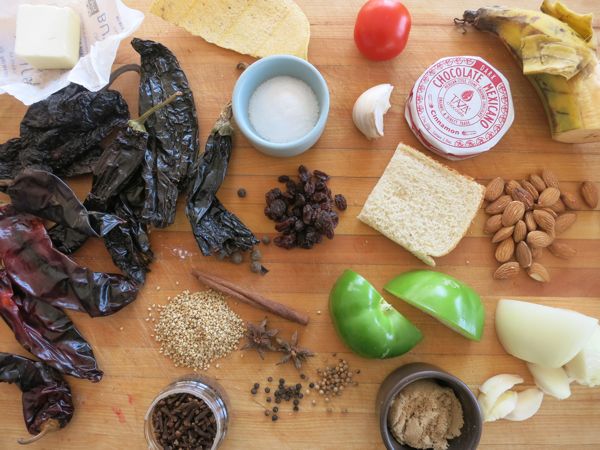 …and I had a few moments where I could play bubble, bubble, toil, and trouble. What amazed me was not how many ingredients I got to toss into the pot, but how little of each ingredient was actually called for…. 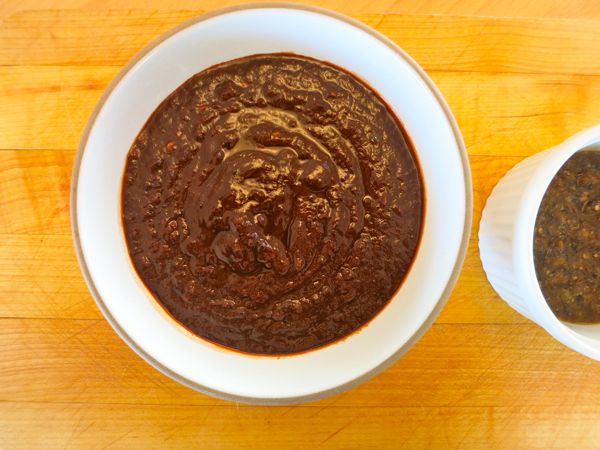 …and there was that Zen moment after toasting, steeping, de-stemming, seeding, and pureeing my three varieties of chiles. The color! So pretty, right?… 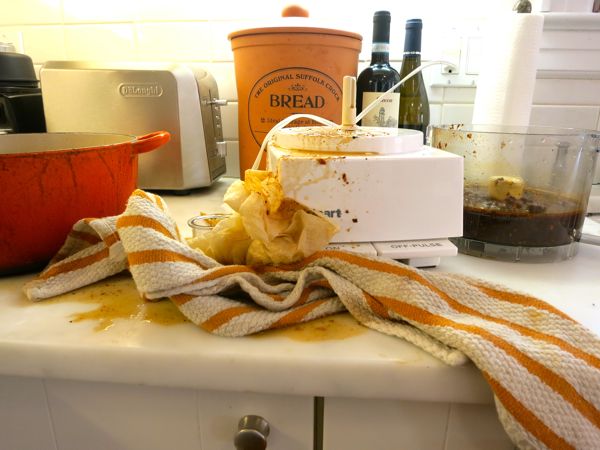 …And then a few not-so-Zen moments. (I always forget about that dang “maximum fill-line.”) 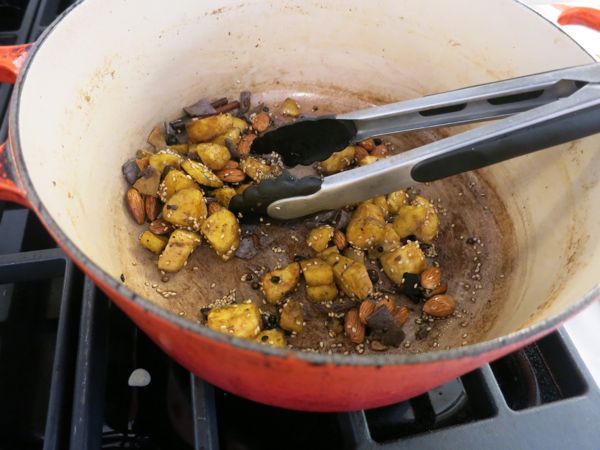 …At this point Phoebe yelled from the other room “Are you making doughnuts?” Nope. I was just sauteeing plantains with cinnamon, almonds, sesame seeds, and about seven million other spices. That boded well for the evening. Though Abby decided she wanted to drizzle the mole on a chicken taco (fine by me), Phoebe ate it the way it was supposed to be eaten, as shown way up top. Best of all, there was this: 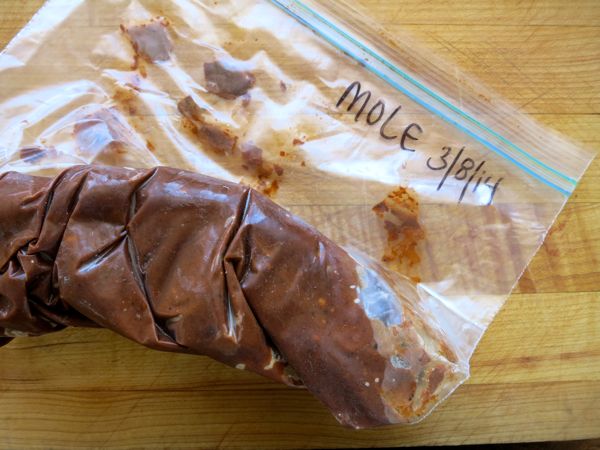 Leftovers for the Freezer! Which means I’ll be serving up something pretty damn tasty on a weeknight very soon. Or maybe I’ll just save it for my next fancy dinner.

Head over to Saveur for the recipe I used, but a few notes first: It was ever so slightly too sweet — I’d cut back on the sugar (to 2 teaspoons) and the chocolate (1 ounce). Also, it can get thick and pasty, so don’t be afraid to thin it out at various times with water. Lastly, it’s crazy flavorful so you probably only have to serve about half as much as shown in the photo way up top. {PS: We ended up serving it with the Mexican rice shown in the Saveur photo. And finished it off with Andy’s Tres Leches cake for dessert. Yes and Yes.}

Inpsiring! I’ve seen Rick Bayless make mole on his TV show, and it looks complicated but so tasty. I think my favorite part of your recipe is the leftovers for the freezer (from a fellow working mom!). Can’t wait for your next book!

the pictures are beautiful!! and it looks delicious!! but, um, no. i wouldn’t have space in my rowhouse for all those leftover ingredients to hang out after i’d used those tiny amounts.

Regarding your new cookbook, I hope by “later” you mean in an hour…….

This is so inspiring. Pierre ate pork knuckles in Port Chester last week. I’ll have to send him back…for spices, not knuckles!

This is such excellent timing – I’m about to move to Port Chester and I’m so excited to go exploring there now! Thanks!

Here is a 30 minute mole from this month’s Sunset magazine, for those who are drooling at this post but need to squeeze it in to a weeknight. Haven’t tried it yet but plan to soon!
http://www.myrecipes.com/recipe/quick-chicken-mole-50400000133936/

I’ve always been intimidated by mole, but have also been itching to try it. This might be the push I need- it looks beautiful.

i love mole but have always been too much of a chicken to even look up a recipe. i may try the bittman recipe for my first crack, i will report back, of course:)

How did you cook the chicken?

Love this!!! Special, complex, recipes always bring me back to why I love cooking! I mean, 5 minutes t-ball tacos are fun – but, there is nothing like spending hours on a lazy Sunday cooking away something spectacular.

On another note, I’m cooking a French dinner party for some guests on Saturday – I’ve never made Julia Child’s coq au vin…..perhaps this will be the main course?

Also want to hear about the new book! DALS is completely dog-earred at our house, just had your chicken and orzo soup tonight. Deconstructing dinner insight for that recipe that I discovered tonight by accident – if I just use a bag of baby carrots, not chopped, they are big enough to be easily avoided by the one child that doesn’t like carrots in soup. Love it when laziness leads to success.

Unrelated question
Do you like the bread crock and what do you keep in there?
I have been contemplating them for a long time….

I had mole once at a Mexican restaurant and it was so spicy, my hair started sweating. That experience just about extinguished any further desire for mole.

Ok, I need encouragement here– I get so bored with the same flavor profiles (I make a LOT of chicken with lemon, garlic, oregano- – or stuff with red sauce and basil– or a pan-fried something with a pan gravy or sauce of reduced wine)– yet I look at the Mole from Saveur and like a teen I instantly say, ew, cloves and raisins? So, do I make it without the items that turn me off or do I put big girl pants on and make it this weekend AS WRITTEN– I find myself avoiding things for this reason, even as I whine about not having enough variety in our dinner choices… help?

My husband loves mole but I have never attempted it at home. Love that you can freeze the extra.

It’s wonderful to make mole but if you want some to have some available without the work, check out a Mexican grocery for powdered mole. It can be stored in the freezer pretty much forever and reconstituted with chicken broth (or water, or pork broth — you get the idea). Not only does it taste like the real thing, it is the real thing!

YUM! Can’t wait to hear about your new book!!!

our 11 yr old son made the Saveur recipe with a friend for a school project. it was delicious and with a few adjustments, kid friendly! i figure if kids can make it, we probably all can. the kids loved making it because (as noted above) it smells good when cooking, you get to use a blender lots and add multiple ingredients. they thought it was crazy just how many things went into it and that upon serving it, no one would really know what they had done! (so sneaky) http://kaleeats.blogspot.ca/2014/03/luke-came-home-from-school-excited-to.html

I will try to not be too critical, but you refer to Diana Kennedy in writing about Mole Negro and the heading for your recipe reads “Mole Negro,” but you then provide a link to a Mole Poblano recipe. While I understand that you might prefer the less sweet Poblano style, it seems a bit unfair to confuse the two for those who might be looking for authenticity. The Saveur recipe is for Poblano Style, not Mole Negro (Oaxaqueno).