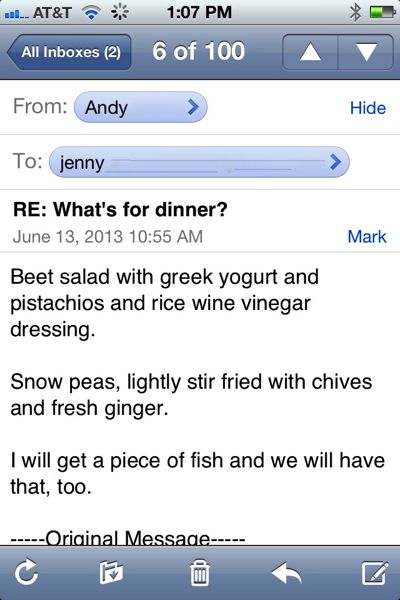 Every year, right around this time, Jenny and I have the same conversation. We will have just finished dinner, and the kids will have disappeared upstairs to take baths or be mad because we are forcing them to take baths even though just they took baths last night, and Jenny will turn to me and say, “I think I could be a vegetarian.” And I am right there with her. Because (a) I like vegetables*, and (b) when this conversation takes place, we are inevitably transitioning from the gray of winter to the technicolor of prime produce season, when the carrots taste like carrots and the beets are like dessert and the kids can easily snack their way through a pint of snap peas, sitting in a bowl on the counter, in the course of a single afternoon.

It’s kind of crazy how a giant box of fresh produce — from the farmer’s market, a CSA or, if we were better people, from our backyard — in the refrigerator can reset your magnetic north (chicken, must have chicken, what can we do with chicken, remember to defrost chicken) when it comes to family dinner and just, in general, get the inspiration juices flowing again. The other day, as I was sitting at my desk, Jenny texted me a photo of some sick-a#s produce, along with a challenge: “What’s for dinner?” Not to go all Alice Waters on you here, but I let the green stuff be my guide. The truth is, you could throw any of this stuff in a bowl with a light dressing, some salt and pepper, and it would taste good. Apart from the roasting of the beets, nothing we did took longer than 15 minutes, start to finish — and the beets, if I’d been smart enough to plan ahead, could easily have been prepared the day before. Which is what I will do next time, because they were the best thing on the plate by far.

“The beets were the star,” Jenny said.

It was after this meal, as we were cleaning up, that Jenny turned to me and said she thought she could be a vegetarian. Will we ever do it? Who knows. It’s possible. That’s a conversation that, for now, gets derailed by Abby’s love of bacon… and Phoebe’s attachment to cheeseburgers… and that also might ultimately be contingent on fish also being in the mix, given our attachments. But what would definitely help speed our conversion along is if I inherited a fertile plot of land in, say, Northern California that would supply us with fresh produce all year round, or at the very least, if this CSA deal could be extended, ad infinitum, until I am old and sick to death of beets. Short of that, we’ll have to see. — Andy 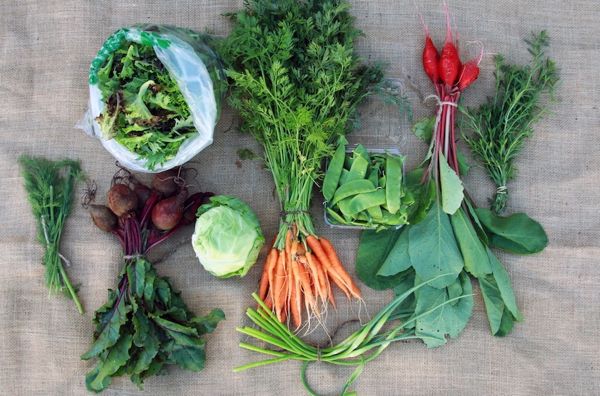 This is the photo Jenny emailed me: A sampling of our idiot-proof raw materials — tiny Napoli carrots, dragon radishes, kohlrabi, Oregon giant snow peas, super sugar snap peas, red ace beets, and an herb called winter savory. And this is what we ended up having for dinner… 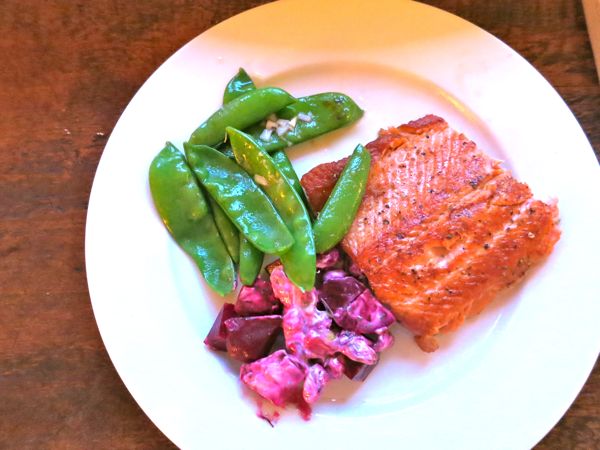 Artic char (or salmon would obviously work, too): Season filet char generously with salt and pepper. In large skillet, add 1 tablespoon rice bran oil (now available at Trader Joe’s; or just use olive oil) and, over medium-high heat, cook fish, flesh side down, for 7-8 minutes, until nicely browned.

Beet salad: Preheat oven to 450°F. Trim stem and rinse beets, wrap in tin foil, and roast for 45-50 minutes. Peel and cut into small cubes. Toss while still warm with a vinaigrette made from olive oil, rice wine vinegar, sea salt, pepper, and dash of Sriracha. Top with large dollop of plain greek yogurt, a handful of pistachios, and some herbs. (We used an aromatic herb called savory, which I’d never had before, but which called my name from the bottom of our CSA box. We only needed a little. It was strong. But good!)

Stir-fried peas: I used both sugar snap peas and snow peas. Trim the ends, and sautee in olive oil over medium heat, for 2 minutes. Toss in bowl with 1 teaspoon freshly grated ginger, 1 tablespoon finely chopped shallot, juice from half of a lime, salt and pepper.

Jenny apologizes for the strangely-lit photo of our dinner. It was too late to go with natural light and without natural light, she would like you to know that she is lost.

This is not on topic, but I just wanted to say that I bought your book on Sunday and read it completely by Monday. We have four children and the oldest is five, and our dinners are complete chaos, but we always sit down to eat together (even the toddler twins). So thank you for your book that addresses the fun and the soul-crushing difficulty of making and eating dinner together.

And I ordered a copy for a friend. She has toddlers, too.

(While writing this comment I have broken up two breakfast time fights and prevented one of the toddlers from climbing out of her high chair and falling. The never-ending excitement of many small children…)

Yum! I have beets and sugar snap peas in the refrigerator. I’ll pick fish and dinner is planned. I never thought of grating fresh ginger over hot, just stir fried veggies. Brilliant.

We love our bag from our farmer’s market. Sometimes we get things that we have no idea what they are but it’s always fun to be able to try new things and flavour combinations. I’m all for going vegetarian. I’m slowly trying to eat less and less meat and feel much better for it.

beet salad! i LOVE beets! so does my husband. my daughter will eat them too. but i LOVE beets. what a beautiful looking lot of veggies, natural light or no 🙂

I could totally be a vegetarian, as long as eggs were involved, and the occasional piece of chicken and salmon….

Beet salads are awesome, and I love the use of pistachios here. Also, I’m glad I’m not the only one who has children that complain about the daily summer shower. 🙂

I think your family is doing a wonderful job is incorporating fresh foods. I think it is so much easier in the summer to consider vegetarianism. For myself I eat what I like. Sometimes the meals that are vegetarian are wonderful, sometimes I need a burger, I don’t feel shame either way, I just enjoy!

Now this is what I call a meal! A solid protein and lots of veggies. Great nourishment for your growing, athletic girls. Thank you.

I gotta say, beets are a deal-breaker for me. I have eaten just about everything from just about every part of the globe but with the exception of Ćwikła, IMHO, there is nothing that can be done with a beet that renders it edible.

Whoa @Lex, thems fightin’ words! Try a market fresh one with this recipe. If anything can convince you to sorta kinda like one….

Beets, to me, are like beautiful jewels. Even when they are dirty – I LOVE them.

As far as vegetarian goes, I couldn’t do it. I crave meat too much and frankly, I just love it. Nothing better than your pork ragu on a chilly fall night.

I have a question – what do you do with the beet greens (leaves)? I’ve tried to use them in salads and stirfrys but they are always bitter and taste gritty no matter how much I wash them.

I’m with Lex. Beets are a deal breaker. They taste like dirt. I could happily be a vegetarian but not a beet eating one.

This idea for beet salad sounds delicious. I must try it. But wanted to inquire about one of the finer points…

Why does every recipe have you roast the beets? Isn’t the point of roasting to get crispy, caramelized edges? But since beets are roasted in the skin, you don’t get any of that. I almost always just boil them instead of roasting. It’s quicker, easier, uses less energy and they still taste delicious. Am I missing out on something? I’m not trying to be a pain. I really want to know.

So, any way someone can tell me more about that rice bran oil stuff? Why should I buy it and how should I use it? TIA.

Hey–you should try this chicken teriyaki recipe from Food and Wine:
http://www.foodandwine.com/recipes/classic-chicken-teriyaki

Delicious weeknight fare and could be whipped up within 30 minutes of returning from a dance recital/lacrosse game.

@Kristin You can – and I do – peel the beets before roasting. I just started this after the “Greek Potato” post here…and I was a bit startled that beets are easy to peel with a vegetable peeler as I thought that was why roasting in the skin and then rinse the skins off. Anyway, I love the lemon-olive oil (and water) technique described and have also been roasting cabbage and fennel that way with beets and sometimes sweet potatoes for exactly the reason you pointed out…crispy, caramelized edges – YUM!

I think a CSA box might be the very best remedy for those of us who get stuck in cooking and eating ruts! I had one delivered for a while and it inspired greater creativity and adventurousness in me and my family, getting us eating celeriac, golden beets, kohlrabi, fava beans, expanding us way beyond our usual broccoli and carrots. After reading this post (and seeing your gorgeous photo), I’m thinking it’s time to join a CSA again – thanks!

Oh…natural light… I live in northwest Montana (by choice!) and natural light in Winter is hard to come by, so: http://www.beardogco.com/theroadhome/?p=11699 – my DIY solution 🙂 .

You do need a spot to keep whatever set up if you go this route or any lighting route or else someone gets a cold dinner, i.e. you need to be able to hit the lights, place the plate and shoot so you can eat!

Have you ever tried Buddha Bowls?
http://annie.paxye.com/?p=1169

The beets, for me, are definitely the star of this show, too, but you grate them raw, so you don’t even have to wait for them to cook. Everything can be prepared while the rice cooks. I dream about this meal. Greater than the sum of its parts, and that’s saying something, this time of year.

Caveat: My kids HATE this meal. But it is a superfantastic candidate for deconstruction.

Northern Californian here … not a farmer though. But we love this time of year too (our CSA has a year round stand at the market but only delivers boxes May through November) and yes, it is easier to consider vegetarianism when your meals all start by considering the abundance of vegetables … Maybe like being a vegan until dinnertime, you could try being a vegetarian until autumn? 🙂 Recipes are gorgeous, and now I’ve a hankering for peas …

omg, i would LOVE to see you do more vegetarian recipes. we’re (2 parents plus 9 and 6y.o.) are veg and love it, but always looking for more. LOVE your site and book and a veg-focused DALS would ROCK.

I have a CSA box question. We get all of these herbs that are great but I am so unsure how to store them. I also never use because I don’t know what “goes” with what. I think I will just try using the herbs I get that week with the veggies I get that week, no matter what it is, going with the theory that if the earth made it at the same time it most work? Any advice from all would be great.