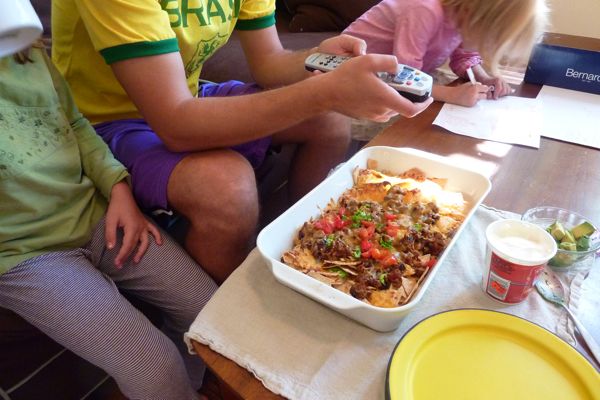 As far as omens go, it doesn’t get much worse than this.

On a Wednesday evening a couple weeks ago, at about 7:30 pm, I proposed something radical: how about we eat on the couch tonight, while watching… Game One of the American League Division Series! This was greeted with surprising enthusiasm. Abby and Phoebe marched over with their plates and plopped down next to me. Hey, great: they finally want to watch with me! We’re going to watch a baseball game together! I’ll teach them the basics, maybe work up to some nuances, even instill some passion – you know, pass down a little of what my father passed down to me when I was a kid. (My dad still goes outside and sits in his car at night, by himself, to listen to the Yankees on AM radio because it’s the only place he gets decent reception). Before long, they’ll be reading Ball Four and trolling ebay for Ron Guidry rookie cards! As Abby’s magic eight ball might say, all signs were pointing to yes.

Then the Yankees took the field.

“Daddy,” Abby said. “Who are the Jets playing?”

Before I had kids I watched a decent amount of televised sports – not a troubling, catatonic-frat-boy amount, but come on, I grew up in America! For much of my life, I probably watched a couple baseball games a week, a football game on the weekend, and yes, there were occasional fall Sundays, post-college, when I watched close to twelve hours of football in a single day. Not anymore. That’s partly because I have children of my own now and enjoy being with them and would feel guilty about ignoring them on a Saturday just to sit on the couch, watching Alex Rodriguez make money. But it’s mainly because I can’t get anyone to watch with me. 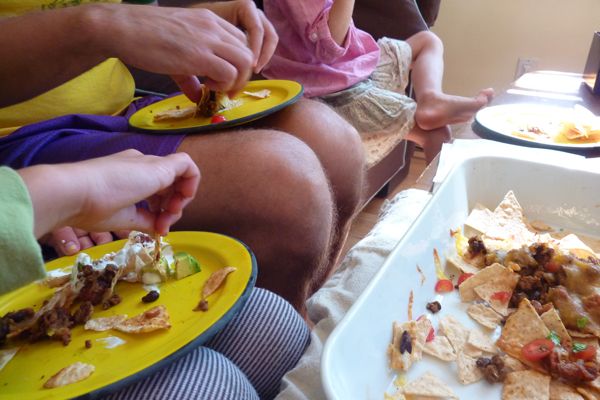 Believe me, I’ve tried. Phoebe, the old soul, will sit next to me and read her graphic novels for two hours while never once looking at the screen – or, worse, only perking up when the Coors Light commercials come on. (I’m worried those commercials will leave a mark.) Abby will sit with me, too, on occasion – though she will never ever sit still; her body will technically be on the couch, and I will be near her, but she will be jumping up and down or playing with half-dressed dolls or absent-mindedly kicking me in the ribs while lying on her back and singing the alphabet in Spanish and arguing with me about whether three strikes do, in fact, make an out — for five minutes, tops, before wandering off to terrorize the dog. Which leaves me by myself. A man gets lonely! And come on: I’ve paid my dues. I still know every Backyardigans song by heart, even the ones from that truly brutal episode where Tasha and Uniqua are the volcano sisters, dressed in grass skirts; I’ve watched Beverly Hills Chihuahua, not once but twice, and read both Pinkalicious and Purpalicious, while weeping inside; I’ve performed duets from Annie in front of a working video camera! (Note to self: must destroy those tapes.)

So: is it too much to ask for, to want to watch one game my children?

The Yankees-Rangers game last Saturday was a little more successful, but I have a feeling it had more to do with the huge plate of chili cheese nachos I served up than the lights-out pitching performance by CJ Wilson. They asked some questions (What’s a foul ball? Which uniforms do you like better, Daddy?). They ate, they watched. At least until the fourth inning, when the nachos ran out and I was alone again. Hey, it’s a start. 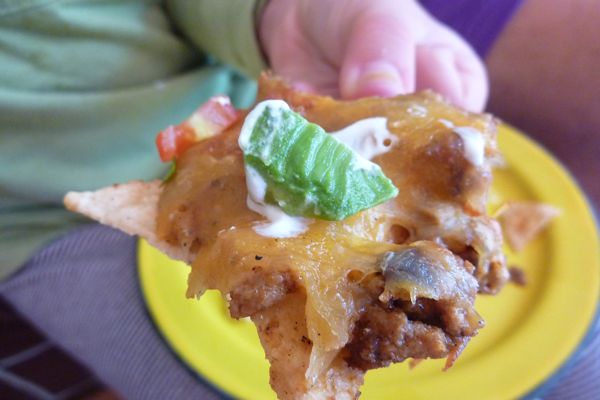 Game Day Nachos
We were lucky enough to have a stash of Phoebe’s chili in the freezer, which made this a 15-minute meal. If you don’t find yourself in this fortunate position, you can replace the chili with a can of refried or black beans.

Add a bag of tortilla chips to a baking dish. Top with a generous sprinkling of warmed chili, shredded cheddar or jack, some fresh jalapeno slices (or the canned kind) and broil until cheese is bubbly and golden, about five minutes. Remove from oven and top with fresh tomatoes, cilantro, more jalapenos. Serve with avocado, sour cream, and salsa.

OMG those nachos look amazing. I’m making them this weekend!

Teach them from a different perspective – that of a RANGER’S FAN..they might enjoy it more 😛

those do look great!

I appreciate all that you’ve given up for your little girls! My husband too can’t believe that he actually helps our 2 girls practice their ballet moves. Every once in a while it’s good to break away from habit and sack out on the couch with a good plate of homemade food, good company, and whatever the choice of tv watching you want. It’s still together time which is more than many kids get these days. Good job!

I feel your pain! And those nachos look fabulous.

We have tradition in our family of having mac & cheese dinner picnics when the Phillies play at a reasonable hour. Best dinners ever.
A post about it and a few mac & cheese recipes, too.
http://myimpreciselife.blogspot.com/2010/10/comfort-food-for-phillies-fans.html

I love that your dad sits in the car to listen to the Yankees on his radio. That is truly a devoted fan.

First of all I have to comment on your Brazil shirt. AWESOME! We don’t have a TV but this year we picked one up just for the World Cup. My parents in Brazil said that if I didn’t have the World Cup on at all times they would disown me. They we’re joking. So we got a TV and my 4 year old and baby watched every single game. We didn’t miss one. Then the world cup was over and the TV left the house. My son was bummed. oh well.

With that said your family is welcome to join my family in Brazil next world cup. We’ll make some rad meals. You bring your nachos and I’ll make the churrasco.

When their Dad is working nights my two boys climb into the bed with me to watch the Yankees. We had the opposite dilemna. I had no baseball background (from another country) but my then 10 month old would watch a ballgame fascinated by the throwing. When commericals came on he would cry. That’s how I started watching. When the Yankees won the WS that year I had to buy a tape to keep him happy.
I am a self taught baseball fan:)

Just made these tonight. Amazingly good! Made Phoebe’s chili earlier today and used it in the nachos. Thanks for this great recipe!