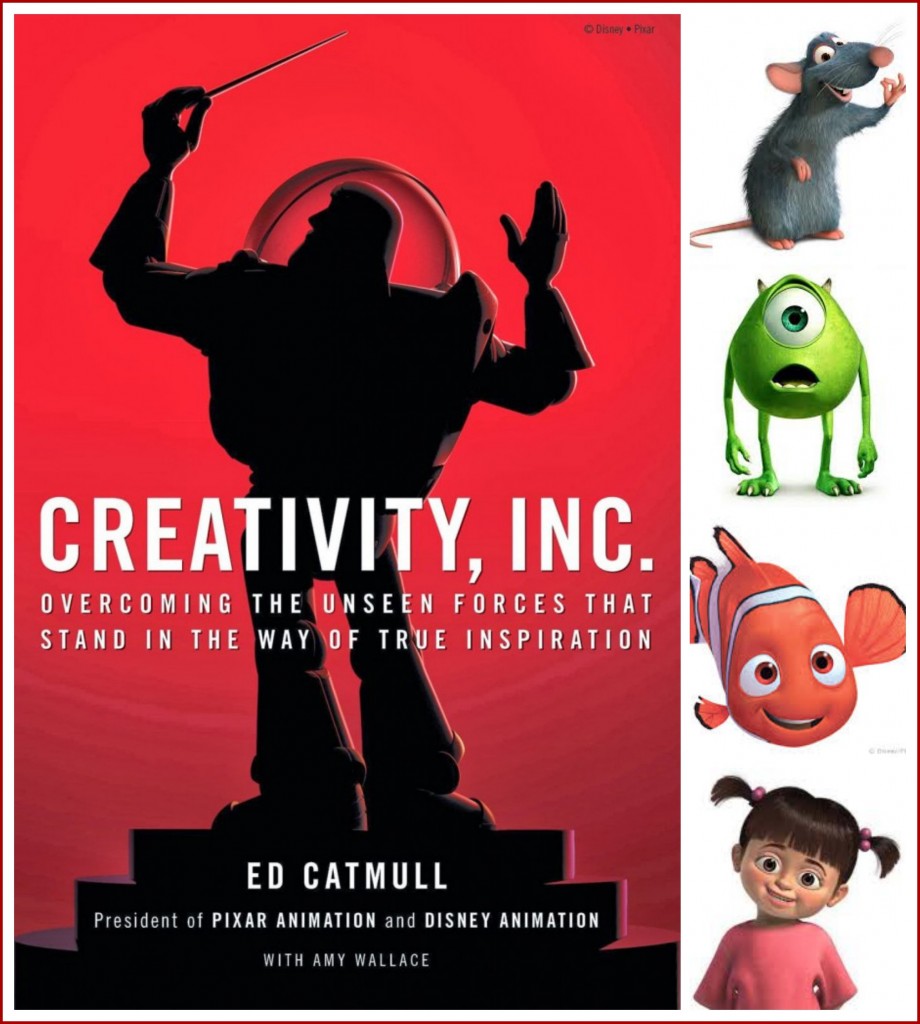 Jenny and I have written a lot about books on this blog — and more specifically, about the role books have played in our kids’ lives, the highlight reel they will summon when they’re old like us and thinking back on the things, beyond family, that added meaning to their lives. What we’ve never really talked (much) about is another part of the kid experience that would also factor into that discussion pretty prominently: Pixar movies. I can’t tell you how many times Phoebe has watched The Incredibles and Finding Nemo, and Abby has watched Toy Story 3 and Monsters Inc. — and, by extension, how many times Jenny and I have sat on the couch or in the backseat of the car, watching right along with them.

So many of our dinner conversations, over the past ten years, have centered around the question: What is your favorite Pixar movie, and why? I love these conversations because, while we’re talking about the movies themselves, we also end up talking about stuff that gets us fired up in a more cosmic way: Originality, artistic ambition, the difference between mediocre product and stuff that lasts, the fact that nobody speaks for the first 30 minutes of Wall-E, the importance of a strong central idea in any creative project, etc. The question of how people make great things — or, how art happens — is an endlessly chewy one, and it’s one that I had the good fortune to explore recently, while working on Creativity, Inc., by Pixar Co-Founder and President Ed Catmull, and Amy Wallace. In the book, Catmull mines his legendary staff for lessons about creativity — the inherent difficulty of it, the need for perseverance, the upside of fear and failure. I thought it would be fun to share a few excerpts we found inspiring, helpful reminders that anything worthwhile is hard. — Andy

Lesson 1: Fail As Fast As You Can
From: Andrew Stanton, Director, A Bug’s Life, Finding Nemo, and Wall-E

Andrew likes to say that we would all be a lot happier and more productive if we just hurried up and failed already. For him, moving quickly is a plus because it prevents him from getting stuck worrying about whether his chosen course of action is the wrong one. Instead, he favors being decisive, then forgiving yourself if your initial decision proves misguided. He likens the director’s job to that of a ship captain, out in the middle of the ocean, with a crew that’s depending on him to make land. The director’s job is to say, “Land is that way.” Maybe land actually is that way and maybe it isn’t, but if you don’t have somebody choosing a course—pointing their finger toward that spot there, on the horizon— then the ship goes nowhere. It’s not a tragedy if the leader changes her mind later and says, “Okay, it’s actually not that way, it’s this way. I was wrong. As long as you commit to a destination and drive toward it with all your might, people will accept when you correct course. People want decisiveness, but they also want honesty about when you’ve effed up. It’s a huge lesson: Include people in your problems, not just your solutions.” Other people are your allies, in other words, but that alliance takes sustained effort to build. And you should be prepared for that, not irritated by it. As Andrew says, continuing his nautical metaphor, “If you’re sailing across the ocean and your goal is to avoid weather and waves, then why the hell are you sailing? You have to embrace that sailing means that you can’t control the elements and that there will be good days and bad days and that, whatever comes, you will deal with it because your goal is to eventually get to the other side. You will not be able to control exactly how you get across. That’s the game you’ve decided to be in. If your goal is to make it easier and simpler, then don’t get in the boat.”

There are moments, in any creative endeavor, where there is so much work to do and so little time to do it that you can’t help but feel fear. Brad knows that if he lingers too long in that frightened place, he will freak out. “So I tell myself that I have time, even when I don’t. As in, ‘Okay, I’m going to proceed as if I have time— I’m going to sit back and muse rather than looking at the clock— because if I sit back and muse, I’m more likely to solve the problem.’ ” Brad thinks of directing the way he thinks about skiing. “I like to go fast,” he says, launching into a story about a trip he took to Vail when, “in the course of a week, I cracked the lens of my goggles four times. Four times I had to go to the ski store and say, ‘I need a new piece of plastic,’ because I had shattered it crashing into something. At some point, I realized that I was crashing because I was trying so hard not to crash. So I relaxed and told myself, ‘It’s going to be scary when I make the turns really fast, but I’m going to push that mountain away and enjoy it.’ And when I adopted this attitude, I stopped crashing. In some ways, it’s probably like an Olympic athlete who has spent years training for one moment when they can’t make a mistake. If they start thinking too much about that, they’ll be unable to do what they know how to do.”

Lesson 3: Get Comfortable with Being Uncomfortable
From: Pete Docter, Director, Monsters, Inc. and Up

Pete Docter compares directing to running through a long tunnel having no idea how long it will last but trusting that he will eventually come out, intact, at the other end. “There’s a really scary point in the middle where it’s just dark. There’s no light from where you came in and there’s no light at the other end; all you can do is keep going. And then you start to see a little light and then a little more light and then, suddenly, you’re out in the bright sun.” For Pete, this metaphor is a way of making that moment— the one in which you can’t see your own hand in front of your face and you aren’t sure you’ll ever find your way out— a bit less frightening. Because your rational mind knows that tunnels have two ends, your emotional mind can be kept in check when blackness descends in the confusing middle. Instead of collapsing into a nervous mess, the person who has a clear internal model of what creativity is— and the discomfort it requires— finds it easier to trust that light will shine again. The key is to never stop moving forward.

Bob compares creativity to an archaeological dig — the idea that as you progress, your project is revealing itself to you. “You’re digging away, and you don’t know what dinosaur you’re digging for. Then, you reveal a little bit of it. And you may be digging in two different places at once and you think what you have is one thing, but as you go farther and farther, blindly digging, it starts revealing itself. Once you start getting a glimpse of it, you know how better to dig.”

Michael takes Bob’s metaphor one step further. He compares writing a screenplay to climbing a mountain — blindfolded. “And the first trick,” he says, “is to find the mountain.” Ponder that one!

In her job, Katherine has to make sure the project stays on track and on budget — which requires reaching out, listening, wrangling, coaxing, cajoling. “I look at every personality as a condominium,” she says. “People live on different floors and enjoy different views.” Those on the upper floors may sit out on their balconies; those on the ground floor may lounge on their patios. To communicate effectively with them all, you must meet them where they live. “The most talented members of Pixar’s workforce— whether they’re directors, producers, production staff, artists, whatever—are able to take the elevator to whatever floor and meet each person based on what they need in the moment and how they like to communicate. One person may need to spew and vent for twenty minutes about why something doesn’t look right before we can move in and focus on the details. Another person may be all about, ‘I can’t make these deadlines unless you give me this particular thing that I need.’ I always think of my job as moving between floors, up and down, all day long.”

I’ve always been intrigued by the way people use the analogy of a train to describe their companies. Massive and powerful, the train moves inexorably down the track, over mountains and across the plains, through dense fog and darkest night. When things go wrong, we talk of getting “derailed.” When projects fail, we talk of “train wrecks.” And I’ve heard people refer to Pixar’s production group as a finely tuned locomotive that they would love the chance to drive. What interests me is the number of people who believe that they have the ability to drive the train and who think that this is the power position— that driving the train is the way to shape the future. The truth is, it’s not. Driving the train doesn’t set its course. The real job is laying the track. 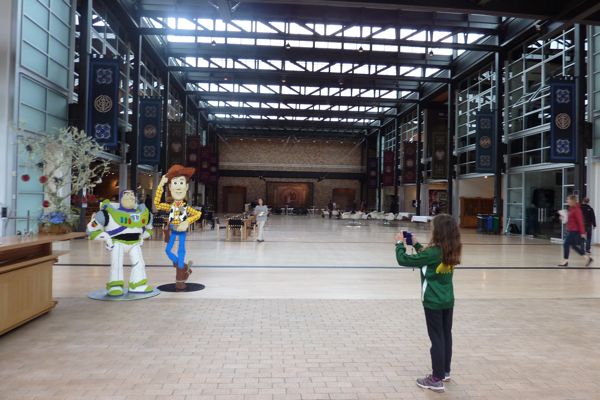 One of the perks of publishing a book about Pixar: Your kids get a tour of their headquarters in Emeryville. This was Phoebe back in July 2012.

This comes to me at a perfect time…. Thank You! Wonderful Blog!
Lori

Thanks so much for letting us know about this book! We are big longtime Pixar-lovers in our house as well. Then I saw an interview with John Lasseter in which he recounted a story of a small boy carrying a Woody toy in an airport and how it motivated him to make the 2nd and 3rd Toy Story movies even better for kids. I nearly swooned. My son has type 1 diabetes, and I recently found out that John Lasseter’s son does, too, and he has raised millions for JDRF. What I would not give for a tour of Pixar!!

Sounds amazing… We are huge Pixar fans and i”m always on the look out for books that inspire. Looking forwards to reading. Thanks.

I went from reading this on my phone to reading it on the site and found it really hard to read here. Grey on white is not a good font choice unless the grey is nearly black.

I’m so glad to know about this book. In the beginning of one of their movies I once saw a video of Pixar employees skateboarding through the lobby and it looked so cool. Phoebe is lucky she got to see it and you were lucky to work with such a creative visionary.

I saw the link to the book in a recent post but when now I want to read it. The comments about those laying the tracks really driving the direction of the train jumps out at me.

So many good lessons here. Thanks for sharing – now I want to go pick up the book!

Loving all the creativity!!! A while back, you posted about a beautiful hand drawn alphabet. Could you please share how I can purchase one? Also, the name of the author. I thought I saved the info, but I didn’t. Thanks so much. LOVE your blog!! ~~Mavi