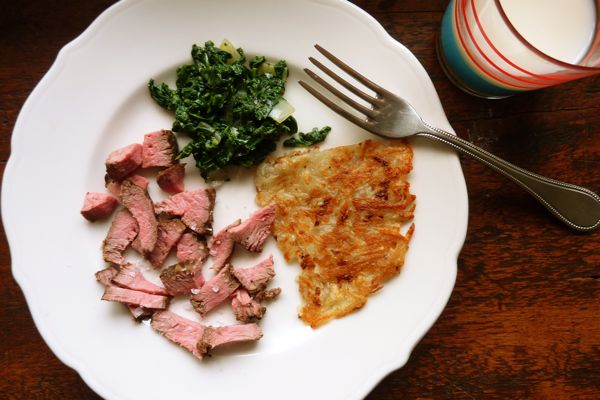 I don’t think a day goes by that I don’t call up about a line that Lisa Belkin wrote in the New York Times two or three years ago. In an article about overparenting and the self-esteem generation used to getting praise at every turn, she asked Are we raising kids who are prepared for college, but not for life? I think about it when my 8-year-old refuses to tie her cleats by herself because she likes the way her parents tie them tighter. I think about it when I read about Ramona walking to kindergarten by herself (or maybe with Henry) while we have a really hard time letting our 10-year-old walk home from a friend’s house around the corner. I think about it when I’m reading about 11-year-old Laura Ingalls helping Pa turn straw bundles into kindling in sub-zero blizzard conditions during The Long Winter. I think about it when I see my daughters’ ballerina classmates twisting up their own buns (complete with hair net and bobby pins), when I am picking up their rooms, and hanging their wet towels, and reminding them to pack their homework, and on “Steakhouse Night” when I’m cutting their filets into teeny tiny pieces because if left to their own devices they’d probably shove Buick-sized chunks into their mouths. Or at least that’s what I think they’d do. Since I’ve never trusted them to cut their own steak, I don’t really know what they’d do. And even though I wish I was a different kind of parent, the way things are going, I don’t think I’m going to find out any time soon. 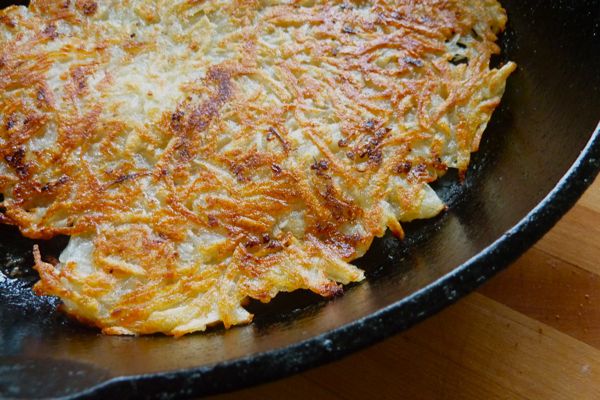 Steakhouse Night
“Steakhouse Night” includes about 2 pounds of filet, Andy’s no-cream creamed spinach, and pretty much always takes place on a Saturday night. The only variable is the potato dish. This past weekend we did a rosti (or, as Abby calls it “the hugest potato pancake ever”) but nothing should stop you from switching it up with twice-baked potatoes or oven fries.

Generously salt and pepper four steak filets. Grill over medium-high heat about 5-6 minutes a side (depending on thickness) until meat is firm but not rock hard. Cut into microscopic pieces if serving to a child under 21.

Potato Rosti (or “Hugest Potato Pancake Ever” as Abby calls it)
This is the kind of thing you don’t really need a recipe for. If you have two or three baking potatoes you can make a thicker rosti; if you only have one, it will work fine, too. Just be sure to add the potatoes to the pan as quickly as possible after shredding to prevent the potatoes from turning brown. But if it does turn brown, fear not, they’ll still taste as good. They just won’t look as golden.

1 to 2 baking potatoes, peeled
1/4 to a 1/3  small onion
salt and pepper
vegetable oil and butter

Using a grater or the shredding attachment on a food processor, shred your potatoes and onion into a large bowl. If you have time, take a paper towel or dishtowel and pat the potatoes to soak up as much moisture as you can. Add salt and pepper and toss. (You can also get creative with add-ins here — herbs, shredded cheese, etc.)

In a cast iron skillet over medium-low heat, add a tablespoon of vegetable oil and a tablespoon of butter. Add potatoes to the pan, spreading and pressing flat so it looks like a large pancake. Let sit for 8 to 10 minutes until the edges look golden and crispy.

Place a large plate on top of the skillet and, working carefully, invert pan so cake flips onto plate. Add a little more butter and oil to skillet and slide the cake back into pan, uncooked side down. Cook another 8-10 minutes until cooked through. Cut into wedges and serve.

Thaw a box or a bag of frozen spinach by placing it in a colander and running warm water over it for a few minutes. Press down on the spinach to squeeze out all the liquid. In a small frying pan over medium heat, add olive oil and a half a large onion (chopped), salt, pepper, a few red pepper flakes (optional, as always). After about 5 minutes, add spinach and toss with onions until spinach is heated through. Sprinkle 1 to 2 teaspoons of flour (this will prevent curdling of milk in next step) and stir. Add about 1/3 to 1/2 cup of milk (lowfat, 1%, whole…any kind but chocolate!) depending on how creamy you like your creamed spinach, and a pinch of freshly ground nutmeg. Stir until heated through and serve.

Can’t wait to try this delicious pancake! Can you recommend a food processor (brand/type)? I’ve been weighing this investment for ages — would it be used enough to justify space constraints? Thanks

Andrea – I have the Cuisinart Pro-Custom 11, but I actually wrote a story for Real Simple about food processors a few years ago. Here’s the link:
http://ow.ly/a1mwS

I have the same woes about my daughter not being able to put her hair in a bun for dance. My oldest is 10 years old and just sits there staring at me with those very sad eyes… until I break down and put the bun in myself. She needs major motivations in many ways. It drives me crazy at times! My 3 year old on the other hand wants to do EVERYTHING by herself.
I was just thinking about creamed spinach this morning. Thanks for the recipe!

The first paragraph sounds like a read from Free Range Kids, which I also enjoy.

Several things hit home about this post.
1) I thought I was the only one who thinks about Ramona walking to school as I dress my 6 1/2 year old! He still does not do it without tears, goading and threats. I imagine myself picking his clothes out in high school.
2) I love that you have steakhouse night, great idea! We are once a year lovers of House of Prime Rib, so why not do it at home?
3) That potato pancake made me want to lick my screen. Gross, but true.
4) I need a new Cuisinart and my birthday is a month away, I think I know what I am asking for.

that potato pancake looks awesome- i can see it quickly becoming a family favorite in my house.

all that worrying got ME worrying: i worry that my daughter will be the one at dance with no bun in her hair at all because neither one of us knows how to do it! 🙂

I think about these same things, especially when I recall babysitting a family of three girls who were 5, 3 and 1…when I was 9! I couldn’t imagine letting my ten year old babysit anyone, let alone three kids.

I have a question about the creamed spinach – can you freeze it once it is made? I always seem to have heaps left over.

Oh w0w-I’m right there with you!! Including the ballet buns! (And why do I keep doing the bun, when other moms don’t even seem to be worried, sending their girls in with just ponies, even though there is a sign in the dressing room, “All girls must have buns…” ) Nice to know I”m not alone, even on the room clean up. Seriously, every Sunday night I think, “This is the week…” Thanks for your great blog-love it!

That spinach sounds delish, can’t wait to try it!

My 11 year old looked at me like I was crazy last night when I tried to cut her pot roast. Sometimes we are our own worst enemy. But on the flip side there are a lot of 8 yr olds out there (including mine) that can operate an ipad, cell phone and computer better than me. So I guess we are doing something right??

I also struggle constantly about trying to make sure I’m MAKING them do things. And there are so many things I did as a child I won’t let mine do. And yet – at a small neighborhood restaurant a few weeks ago with my parents, I let my daughter go to the restroom by herself. My mother nearly DIED. Swore she never would have let us do such a thing. My daughter is a first grader. Who knows how to do it just right!? LOL. Also I’m excited about the creamed spinach as mine is ready for picking now.

Jessica – That made me laugh. Letting them go to the restroom on their own in a restaurant is one of the few things I let them do — as long as I can see the bathroom door and know where all the exits are. My parents are the same and yet, I was riding my bike to school by myself when I was my daughter’s age.

Sigh. I hear you Oh how I hear you! I love how you said “at least that’s what I thing they’d do” — I think I spent far too much time imagining what horrors might befall my kiddo — time that would be far better spent teaching her to DO stuff!

Funny, just came home from the first pre-swim team work out of the season to husband’s grilled steak ( sun in Seattle today!) and before I had a chance to cut up the steak as usual for him, my 9 year old son dove right in and cut it himself. He couldn’t wait and did it pretty well on his own. Hunger beat unwillingness or maybe he grew up a bit over the winter. Whichever, my husband winked at me while it was happening and maybe someday we will look back wishing he was still too young to do things for himself, but not tonight!

I read and enjoyed “The Blessing of the Skinned Knee” by Wendy Mogel. It helped. When I finished it, I started letting my daughter be at the park by herself after school – half a block away and we both had walkie talkies, but it was a start!

Ha ha ha ha! I was just yesterday in the ballet studio frantically doing my 11 yr. old’s bun per her perfectionist standards and right next to us is a 9 yr. old expertly doing her own. And I whispered, “I think it’s time you start doing your own bun…look at Shelby…she’s only 9!” And my daughter said, “But when I’ve tried to do it it’s too loose – YOU do it the best!”