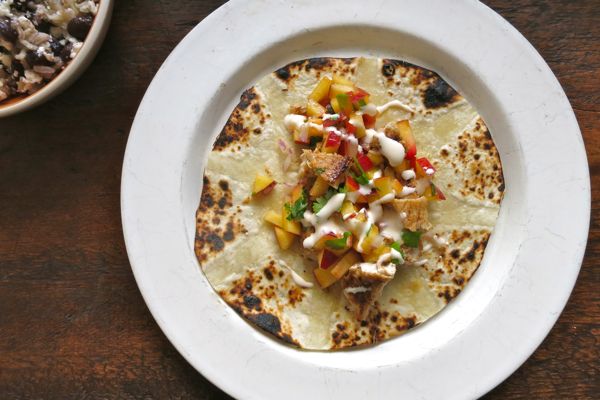 When you picture dinner in my house, do you imagine two starving little middle schoolers, banging utensils on the table with both hands, and rolling their eyes at their mother as she snaps photos and re-positions garnishes just so? Or me shouting “one more second” from the next room waiting for the sun to sink to just the right place, creating optimal lighting conditions? Well, you wouldn’t be entirely wrong. That happens — but only selectively. To think that we are making something that needs to be photographed every single night is to assume two things: 1) That we are cooking something brand new every single night and 2) That what we are making is always fit for DALS. (Believe it or not, just because it was eaten in the DALS house doesn’t mean it’s a DALS-esque meal — the super-dry chicken burgers that went unfinished by even the grown-ups come to mind, as does the sushi take-out we ordered this past Saturday night.) The truth is, we have our weeknight family favorites — most of which are bundled up and memorialized in two books now — as well as our various permutations of those favorites, and in order for a meal to qualify as “blog-worthy” there has to be a little learning involved. If I’m writing a post where the recipe is the star, the answer to the question “Is there something new to write about here?” must always be “yes.”

So there I was on Labor Day, the night before school started, eating my grilled pork tacos with peach salsa (prepared by Andy) and not even thinking about taking a photo because hey, we’ve written up tons of tacos already…heck, we’ve even written up pork with peaches. But mid-way through my dinner I realized that something magical was going on with this taco, besides the fact that every diner at the table had stopped talking in order to focus and grunt a little — the cilantro-heavy, sweet-hot, more-peach-than-tomato salsa was a revelation. And when we drizzled some Mexican crema on top of the spice-rubbed pork, well…I wouldn’t have been able to stop myself from eating long enough to take a photo, even if the sun had been in the right position. For the rest of the night I was following Andy around the house asking “Why didn’t you make me take a photo of that dinner? It would’ve been perfect for the blog…” (His response: “Wow, you really blew that one.”)

So I had no choice but to recreate it for lunch the next day. That’s how much I love you. And this dinner. Here you go: 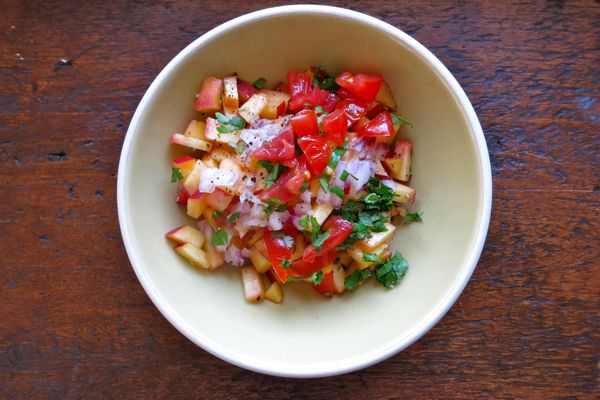 Grilled Spice-Rubbed Pork Tacos with Peach Salsa
Makes about 6 tacos (2 for 2 grown-ups, one for each kid)…

Make your rub. In a small bowl mix together all spices. Using your fingers, smear it all over a pork loin. Let it sit for a coupla hours — or less if you don’t have a coupla hours. (Also, wash your hands thoroughly afterwards, especially if you will be taking your contacts out later — nothing like a little cayenne in your eyeballs to ensure an uncomfortable night’s sleep.)

Grill pork over medium-hot coals, flipping all the while, for about 15-20 minutes until loin is firm to the touch but not rock hard. You can also cook your pork in two tablespoons of olive oil in a Dutch Oven over medium heat. (Internal temp should be about 140° if you like to measure doneness that way.) Slice into bite size pieces and place on a platter.

Grill six tortillas for about ten seconds a side — or over a stovetop flame. (Hence the burner shaped-char on the taco pictured above.)

Place pork, tortillas, peach salsa, and crema on the dinner table and have everyone assemble their own tacos. 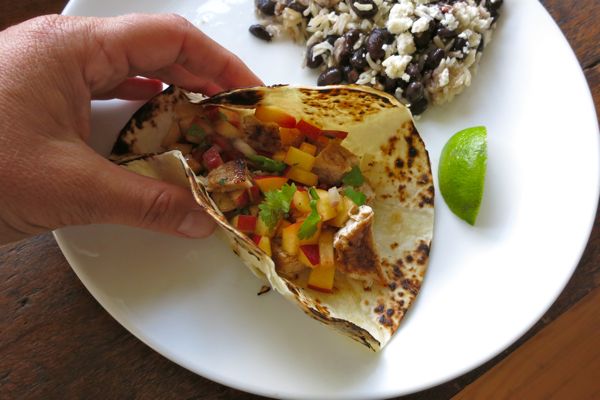 We served this with a side of brown rice mixed with black beans (that had been simmering with a bay leaf and fresh lime juice), then topped that with queso fresco crumbles, and more cilantro and lime juice.

Looks amazing! Will try! We make a pork taco recipe from Southern Living with pineapple salsa that is really good (use of canned pineapple is a plus!).

I always wonder how you photograph supper in the winter-time. What do you do about the lighting?

Awads – good question. You’ll notice a lot more “process shots” in the darker months, or shots of only the ingredients laid out (and not the finished meal) because that’s all that’s ready when the light is right. Sometimes I shoot leftovers the next day when light is better. The next logical question is “Why don’t you learn how to manipulate light like a real photographer?” I’ll get back to you on that one.

I actually really appreciate the shots of the ingredients laid out–gives me confidence that I have the right stuff in inventory and am rarin’ to go!

This looks delicious! I love the sound of the sweet salsa!

Jenny – I’m laughing about your manipulating light comment. I am so lost in the winter without the natural light, it kills me! I often find myself cooking during nap time instead of dinner time just for some sunlight.

This sounds delicious. I have recently been reacquainted with the pleasures of slow cooked pork for dinner, and I wonder if this could be made in a crock pot? Could be a great help these busy Fall days to throw something in the crock pot in the morning, and to be greeted with yummy pork when you come home at night!

You had me at the magical tacos. 😉 And you have no idea how many photos have been ruined/made-infinitely-cuter by a hungry little toddler hand reaching for some food in this house. 😉 Thanks for the taco idea, sounds incredible. In my book, you can never ever have too many taco recipes.

I love the perfect browning of that tortilla!

I love this flavor combo – and any excuse to taco is good in my book! Beautiful!

Do you think this would work with chicken? And to push it further, just use the spice rub on a regular cut up chicken and serve the salsa with it?

Yep this sounds awesome. Peaches are wicked expensive here, but mango’s are plentiful and cheap, so I know what direction I’ll be taking this dish. Thanks for the inspiration!

Love your added suggestion of the rice and bean side dish, too. A bay leaf adds so much flavor! I’d probably make a double amount of the salsa, to have enough to mix into the rice, as well.

Will be making these next week (as this week’s menus are already made).

Thanks for deciding what I’ll make for dinner tonight! I can’t wait.

Looking forward to trying some of these new recipes! Just an fyi, I was clicking through your recipe page and the link to the recipe for a rice omelet with peas was broken. Thanks!

These were fantastic! I can not believe I’ve cooked all these years and have never used a rub. I looked for the smallest pork loin because I didn’t think anyone would eat it. I was wrong. Will be using more rubs in the future.

Made these tonight with leftover spicy sweet grilled pork tenderloin- the nectarine salsa was amazing!!!! Adding to our regular rotation! This happens to only about 1 in 10 recipes so thank you!!!

Gonna try this 🙂 thanks for sharing 😀

I stumbled across this just last week (I know! How did I miss it the first time?), and made it for dinner last night. My husband raved and raved about this dish – he must have said at least twenty times “This pork is amazing!” He’s almost always complimentary of my cooking, but this one got major top marks, and the fact that I thought it was delicious too was a win-win-win! Thanks, DALS.