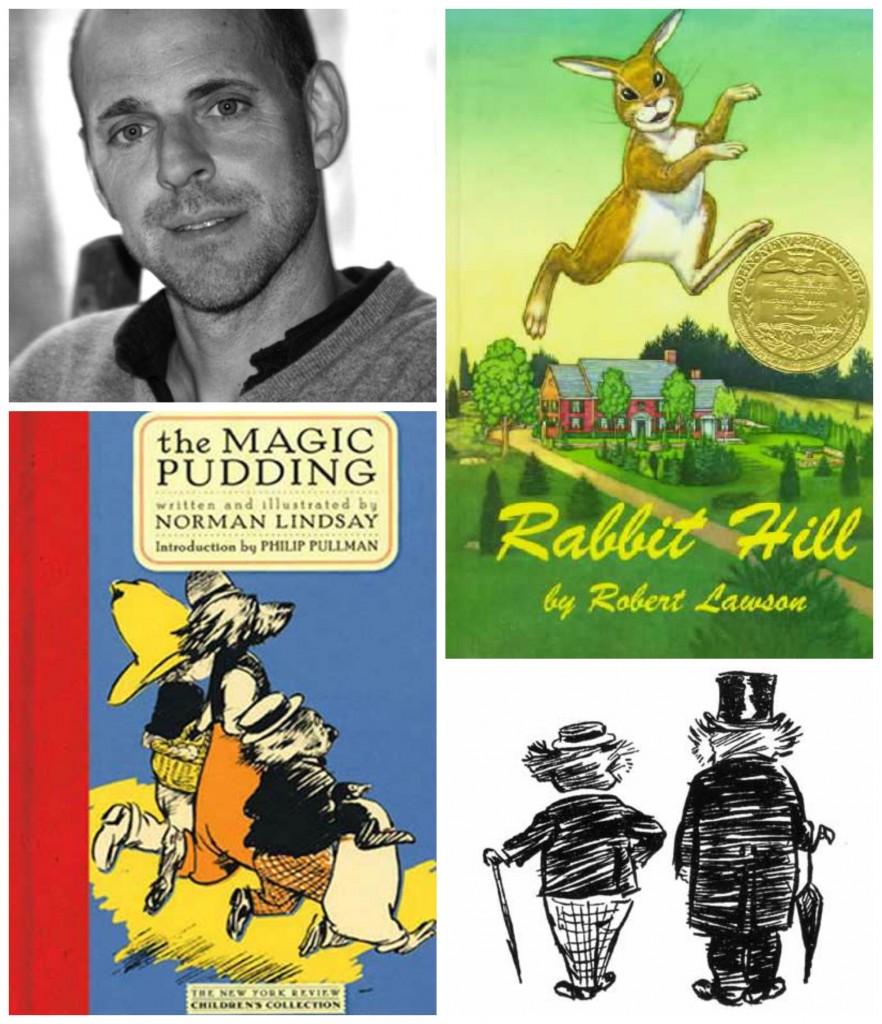 Our next guest in the DALS Summer Reading Series is Michael Paterniti, a man who needs no introduction (and not only because we just introduced him last month). Besides being the father of three voracious readers, he is the author of the New York Times bestseller The Telling Room: A Tale of Love, Revenge, Betrayal, and the World’s Greatest Piece of Cheese, and joins us today to tell us about his two (give or take nine) most memorable childrens’ books. Thanks, Mike!

My favorite children’s books belong to two distinct categories: the ones I adored as a kid, and then the ones I’ve loved as a father reading to my kids. To the first pile belong treasures like Homer Price (who can ever forget Uncle Ulysses’s doughnut machine!), The Tomten (about a mysterious elfin man who rummages a remote farm by winter night, talking to the animals), The Great Brain (oh, how I wanted to be him, pickpocketing the world with his schemes!), and The Hardy Boys catalogue (the recurrence of their friend Chet, in his jalopy, on the prowl for lemonade and chocolate cake while the brothers face harrowing danger, still cracks me up).

To the second, the father pile, belong almost anything by Chris Van Allsberg (The Stranger, The Mysteries of Harris Burdick, The Polar Express) and The Hobbit (still one of the world’s great travelogues) and, say, Penguin Dreams (the surreal, wonderfully psychedelic journey of a penguin through his own dreams). For our purposes today, however, I’m limiting myself to a couple of desert-island books, one in each category. I realize only now in writing that both are appropriately animated by food (and one, perhaps the strangest and funniest children’s book I’ve ever read, is actually about animated food!). So here goes… 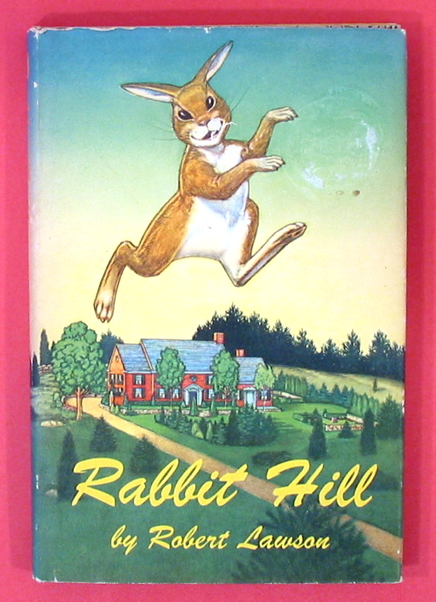 Before this book, which I read at age nine or ten, I’m not sure I fully understood how books work, how a good one can deposit a secret world so whole and alive in your head. A Newberry Medal winner from the 1940s, the story centers around one rabbit family, living on “the Hill” in Connecticut, and begins with the refrain, “New folks coming.” See, the Hill has fallen on hard times because the big house there—and its fantastic garden—have fallen into disrepair after a string of “mean, shiftless, and inconsiderate” owners. Now as the animals grow skinny and sip their “thin soup” everything relies on the new folks being planting folks. Meanwhile Little Georgie is going up “Danbury way,” where times are even harder, to retrieve his old Uncle Analdas, who’s just lost his wife and whose dinners consist of a skimpy turnip. Thinking about Little Georgie out in all that wilderness sets Mother to fretting in the kitchen, worrying about “the possibility of Dogs, Cats, and Ferrets; of shotguns, rifles, and explosives; of traps and snares; of poison and poison gases” while longwinded Father, of southern stock, tries to reassure her of the boy’s capabilities. And sure enough, son and uncle return, the new folks move in, and everything seems quite promising indeed until one night, as Little Georgie sallies forth on another errand, there’s the screeching of car brakes from the road, and Little Georgie disappears.

Though known for his great illustrations, Robert Lawson is an evocative, lyrical writer. I won’t ruin his ending, which is simple, moving, and wonderful, but I will say that, first and foremost, Rabbit Hill is a book about generosity—at its most elemental about the overwhelming gratitude we feel when down and hungry and offered food—and that’s a very good thing to be reminded of in this world. Ages 7+ 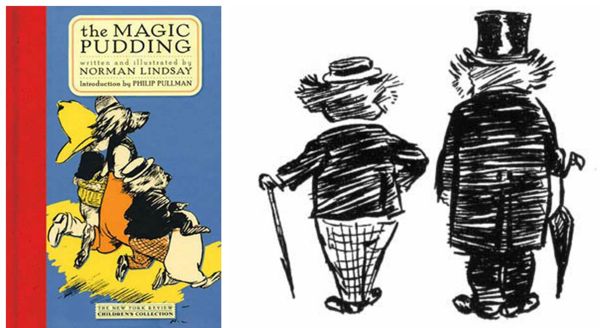 Um—I don’t quite know where to begin with this one except to say that when I read it to our son, Leo, some years ago, he wore the most quizzical expression for 169 pages, kept snorting with laughter, and said, “I don’t understand any of this!” which seemed to make him happy and all the more interested. And he never let me stop reading.

First published in Australia in 1918, the book centers itself on Bunyip Bluegum, a tidy, proper koala bear who leaves home to see the world because his uncle’s whiskers are too long, and take up all the space in their tree house, and soak in the soup at dinnertime, which is depressing. Before long, Bluegum’s fallen in with Bill Barnacle, a sailor, and his friend Sam Sawnoff, “a penguin bold,” whom he finds eating lunch. “They had a pudding in a basin,” reads the book, “and the smell that arose from it was so delightful that Bunyip Bluegum was quite unable to pass on.” This pudding is named Albert, and is a little foul-mouthed, and takes no guff. And it loves to be eaten, never runs out, and can transmogrify into the thing you most want to eat. (“It’s a Christmas steak and apple-dumpling Puddin’,” says the penguin. “It’s a Magic Puddin’.”)

Of course, rollicking high jinx ensue, the Puddin’ is stolen, strange characters appear, long, wacky, wonderful poems are delivered, the Puddin’ sulks and snarls and ripostes, and the pictures are fantastic. Lindsay said he wrote the book because children like eating and fighting, but I might add that what they—and their parents—like most of all is to laugh together. And there’s no weirder, funnier children’s book out there, one based entirely on the wonderful ways we feed ourselves, with words, stories, adventures, and cobbler. (Ages 8+)

Thanks. The Magic Pudding and Rabbit Hill are now on my must have list. Thanks too for recommending The Trumpet of the Swan a while back. I read it aloud when were camping recently, such a blissful way to while away the hot midday hours under a shady tree.

Hi Mike, this is a really cool post and I can’t wait to read these books, especially the pudding one!!! Have Leo, May, and Nicky read them? Congratulations on The Telling Room, and see you soon. Love, Abby 🙂

I’ve been dying to read/own The Magic Pudding for AGES and this makes me wonder…why am I waiting?? Off to get this book in my permanent book collection. 🙂

Magic Pudding was a favorite in our house growing up, we read my father’s old copy from the 1950’s. I think my brothers and I will probably fight over who inherits the “original” one day!

I look forward to your book posts and recommendations, this is great!

This is awesome. Just in time for vacation reading next week. Heading to the library to find as many of these as possible. Love these book posts. Thank you!

Thanks. Was just thinking yesterday about the giant mystery plant that Homer Price tended, and all the Centerburgian’s excitement as it grew and grew, and how it turned out to be…. I won’t spoil it, but I remember exactly what it was, now 40 years since I read it. I think reading Rabbit Hill in elementary school prepared me to love Watership Down about a decade later.

I love this! I’ll have to tuck this away for my future kidlets, but thanks so much for sharing. I just read the excerpt from his book in NYT, and I couldn’t stop thinking about it for days. Looking forward to sitting down and reading the rest of The Telling Room!