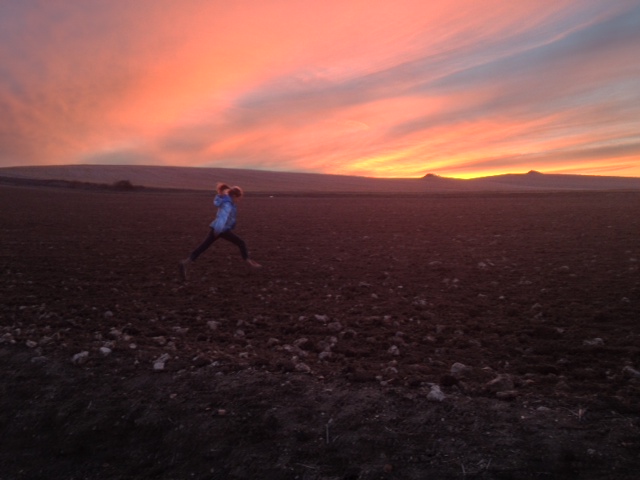 I’m a *little* worried this is going to sound like a wedding toast.

I have basically been following Mike Paterniti around for the past twelve years. When I worked at Esquire — as a kid, practically — Mike was the star writer who would come into town, from Portland, Maine, with his Patagonia backpack and his good vibes, and be nice to all the peons, and then fly off to crazy places and bring back stories like this and this, stories that would make 25 year-old assistant editors like me say, Damn, it would be nice to work with a writer like that someday. Then, when I went to GQ in 2002, I went — in large part — because Mike was there and, by taking the job, I would finally become his full-time editor and have the chance to work on stories like this. Then, a few years ago, I moved on to Random House — in large part — to work with Mike again, on a book he’d been obsessing over for the better part of a decade. That book, The Telling Room, was published yesterday, and the easy thing to say about it is that it’s a slow food fable about a cheesemaker, named — proof that there is a god? — Ambrosio, who lives in a tiny village (pop. 80) in Spain and makes his cheese, according to an ancient family recipe, from the milk of sheep that graze on chamomile and sage. But that’s not really what the book is about. This book is about the heartbreaking story of Ambrosio’s world-class cheese, yes, but it’s also about Spain and the ghosts of Civil War, about friendship and betrayal, about love and memory and forgiveness, and, most important, about stories. The stories we tell ourselves in order to live.

Do I love this book? Yes.

Did I warn you this was going to sound like a wedding toast? Yes.

In the course of writing and reporting his book, Mike spent a lot of time in Spain. He estimates he made 15 to 20 trips to Guzman, in fact, during which he learned a lot about Ambrosio and his magical cheese (it was said to conjure memories), but also about family dinner. Given that this is a blog dedicated to that very subject, we asked Mike to tell us how they do in the Castilian highlands. He did, and we’re glad. Congrats, Mike! — Andy

Of all Spanish institutions, family dinner ranks as one of my favorites. Why? Because it happens to be Spanish chaos theory at its best—and the Spaniards are good at chaos. After all, what other nation runs with its bulls… or holds a massive tomato-pelting event, in which citizens throw over 90,000 pounds of tomatoes at each other… or has an annual, mandatory, four-day, wine-soaked party—known as the fiesta—in every village of its great, sun-scorched land?

In classic Spanish fashion, then, family dinner is a microcosm of this craziness and big joy. And of course, there’s a fair amount of confusion about when dinner really is. Is it the big meal in the middle of the day, known as the comida? Or is it the late-evening, smaller meal known as cena? (The Spaniards love their food so much they have five designated grazing times a day: desayuno, or breakfast; almuerzo, the late-morning snack; comida in the early afternoon; and then the latter meals of the day: merienda, or late afternoon snack; and cena, dinner.)

Cena is the best—and in summer begins anywhere between 10 and midnight. In the plazas of the cities, you’ll see families seated at outdoor restaurant tables, telling animated stories, wine, chorizo, and grilled pimientos on the table, a simple green salad and some lomo on the way, the kids sprinting madly over cobblestones, playing soccer, chasing birds, when suddenly someone walks by on stilts, or an orchestra begins to play, or some impromptu marching band comes banging through the square. The voices get louder. Now the gambas sizzling in olive oil are put on the table, the laughter echoes, the kids shriek with joy as they come and go, grabbing tidbits from the table.

In the little Castilian village of Guzmán, where I moved my family one summer as I wrote my book, we often found ourselves with an invite to my friend Ambrosio’s telling room for cena. A telling room is a little hobbit hole dug into the hill on the north boundary of town, most of them equipped with a simple wood-plank table, a fireplace full of dried grapevines, which gives the grilled lamb a sweet taste, and a porron—a glass, decanter-like vessel with a spout—sloshing with homemade red wine. In Ambrosio’s telling room, the shutters were thrown open so we could look out over the picturesque village with its palacio and impressive church as we ate and drank. In fact, I’d often look up from the table, tricked by the illusion that I was gazing upon some ever-changing painting on the wall that just happened to be the village of Guzmán itself.

Ambrosio is a legendary storyteller, and a force of nature—a 260-pound hulk of rollicking, Falstaffian energy. It was here in Ambrosio’s telling room that I heard many amazing stories, including one about how his world-famous cheese had been stolen from him by his best friend, and how he was now plotting that best friend’s murder (which later became the subject of my book). But for the most part, on many of these summer nights, the stories weren’t quite as serious as they were bawdy or uproariously funny, as food landed on the table—some olives and tomatoes, chorizo and morcilla, a tortilla and tender piece of fish. Our kids, small at the time, waddled and clambered about. They climbed the hill outside. They went down into the caves below the telling room, where the homemade wine and cheese was kept cool. Ambrosio was the giant in some strange fairytale they were living, along with us, their parents.

Back at home, we tried to keep bedtime on a schedule, but in Spain there was no schedule – and no bedtime. No one slept it seemed! Soon, Ambrosio had his charanga out, playing music, singing songs. There were more jokes and even longer stories. Midnight passed. Our daughter fell asleep in my arms; our son’s head drooped on the table. Suddenly—there was flan, brandy, cheese. More music, conversation, meaningful hugs. Something about the lack of structure, the Bruce-Springsteen-concert length of it all, and the circus that Ambrosio brought to every meal made it feel everlasting.

And isn’t that, in the end, really what the best family meals are? 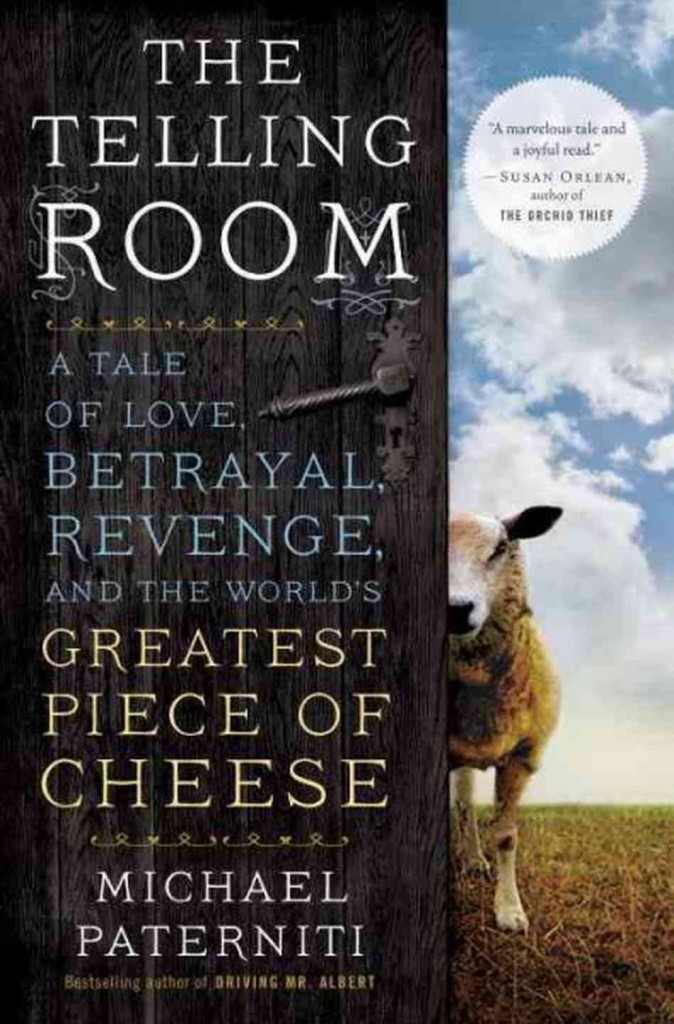 Included here is a recipe for a Castilian delicacy known as olla podrida, or “rotten pot stew.” It was related by Ambrosio, in his own voice, to his great friend and Spanish expert, Gerry Dawes:

“First, an olla podrida should be made with alubias de Ibeas, the little black-red beans that come from around the village of Ibeas east of Burgos and are the best beans in Spain. That is most important. Then, in a clay stovetop casserole, you slowly cook the beans with a special adobado (marinated) pig foot, a marinated pig’s ear, and pork ribs. The adobo marinade is made with salted water, to which oregano is added or, depending on the area, other spices such as black pepper, bay leaves, and paprika, sometimes even piquant paprika. The marinade, which gives the olla podrida its strong flavor, also preserves the meat, so it can be left all season in a cool place such as a basement or a cave. Then you put in some fatty chorizo, the one they call botageo, because it has a higher percentage of fat to lean, and some morcilla, blood sausage.

“But, there is more.” Ambrosio continues. “Once the olla podrida is cooked, you make what we call bolas, made from toasted hard bread that is then mixed [with] some of the pork fat from the stew to make ‘balls,’ which are then fried and served on a platter alongside the olla. The meat that was cooked with the beans is served on a separate platter, the beans are also served on a separate dish, and guindillas, pickled onions and other pickled vegetables are served as a garnish. Then all you need is a big appetite.”

Afterward, according to Gerry, “Ambrosio recommended a scandalous precaution, not to be repeated here, for the flatulence he said was sure to ensue.” 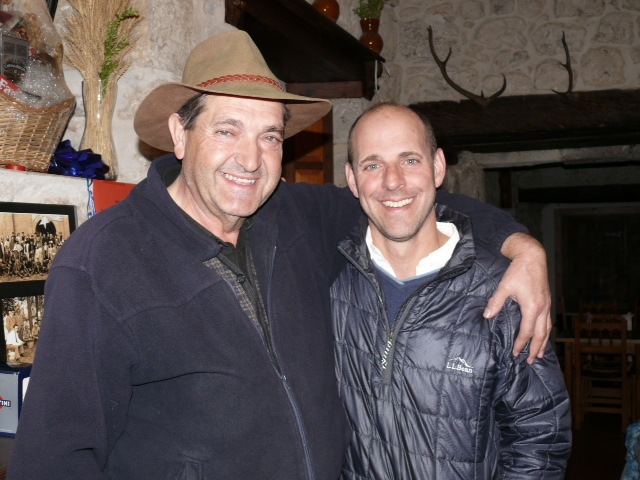 Michael Paterniti and the cheesemaker, Ambrosio Molinos de las Heras, in the family bodega — a Roman-era cave where the wine and cheese are stored, homemade chorizo is eaten, and stories are told — on the outskirts of Guzman.

I’m beside myself with excitement. I’ve just ordered this book last night. I can hardly wait for it to arrive.

I heard you on NPR! Now I’m definitely going to read this book. Thanks Michael and thanks DALS! I love your book recommendations.

This is just beautiful. Thank you.

This book if one of the best I’ve read this year. The writing is excellent, and I’ve never wanted to eat cheese more than when reading The Telling Room.

Yay! So, the NY Times on 08-02 -13 put the story on the first page. I just read it with my morning coffee, which is my version of the Ambrosial Life, a half hour minimum a day,before I go to my desk to do the necessary work. Thank you, both DAlS and Michael Paterniti for this gift of Magic and Wonder.

Anytime you want to quote Joan Didion is ok with me. Can’t wait to read the book.

“I read your newsletter, do I win the Franny’s cookbook?”