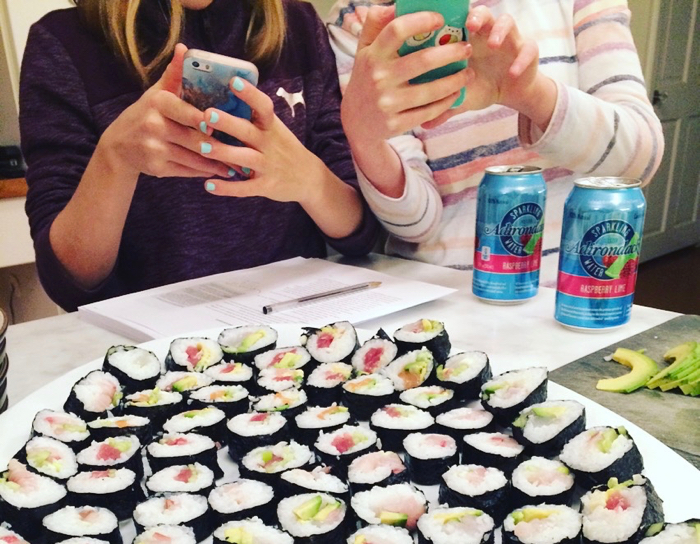 If you want to learn how to make sushi rolls in your own house, the first piece of advice I have for you is this: Don’t ever watch Jiro Dreams of Sushi. Actually, scratch that: Watch it, because it’s one of the greatest documentaries I’ve ever seen, but then try to push Jiro — the sushi chef whose Michelin-starred restaurant in a Tokyo metro station is considered the finest in the world — out of your head immediately. Because after I watched Jiro — five years ago on a plane — any time someone said to me, “Hey do you ever make your own sushi with the kids?” or “You should do sushi on your blog,” I’d be all, What are you crazy? Sushi is for artists and geniuses. Not for lowly bloggers who traffic in the currency of shrink-wrapped chicken breasts.

It was only a matter of time, though, before my willful ignorance would catch up with me. When I started this blog, I remember telling someone, “You will never catch me writing about all these precious foodie kids who, like, make their own sushi. Ugh. Barf! Who are those kids?”

Well, it turns out at least two of them live in my house and boy do they love Japanese food. It’s our family’s first choice for both the weekly takeout or the once-a-year birthday celebration; my youngest, who you might remember detested fish as a toddler, now views adventurous sushi ordering almost as sport. And in spite of the bad rap the suburbs get, we have a surprising wealth of options when it comes to both Japanese restaurants and markets. “We should make our own,” Phoebe suggested once when we were sharing a few overpriced pieces of toro at the local haunt. “Nah,” I told her. “You saw Jiro. This kind of food is for artists and geniuses.” 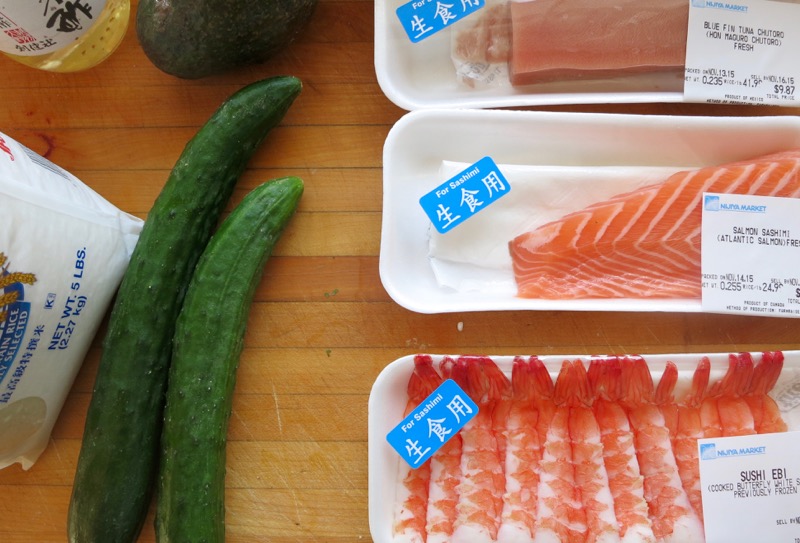 So it shouldn’t have been too much of a surprise to me when one Saturday, a little over a year ago, Andy and the girls came home with two bags from one of our markets, Nijya, in Hartsdale, two towns over from us.

“I thought we were going out for sushi tonight,” I said.

I was instantly panicked.

“I have no idea,” he said, unpacking a treasure trove of fish and a specialty soy sauce whose label was written entirely in Japanese. “The way I see it is that you are either with me or you are against me.”

His confidence was maddening.

The girls climbed on the countertop, as they are wont to do, to wait for their orders. I’m not sure if they read or youtubed a single how-to before plowing ahead. Me, skeptical to the core, poured myself a gin and tonic, and did absolutely nothing but observe, anticipating some slapstick entertainment, admittedly while adding up all the dollars we’d save by making our own.

You know how this story ends. Of course it was delicious and of course it was so much easier than I thought. Best of all, it’s become something of a ritual; when we find ourselves free on a Saturday night, it’s our default dinner — no activity — made even more fun when the girls invite an instagramming friend over to help. Is the final product Jiro level? Um, no, but I should know by now that not much is, in food or in life. 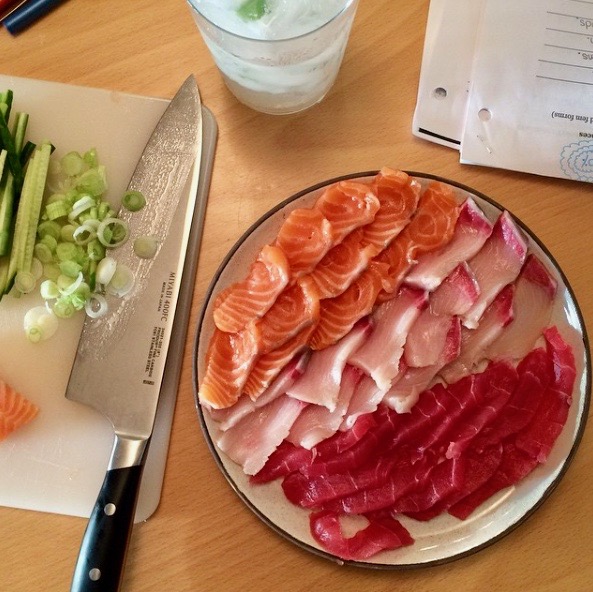 Lay out your components on the countertop:

*sushi rice: Cook 2 cups Japonica or short-grain sushi rice (rinsed under cold water) as directed. Remove from heat. Let stand, covered, for 10 minutes. While the rice is cooking, place 4 tablespoons rice wine vinegar, 2 tablespoons sugar, and 2 teaspoons salt in a small saucepan. Bring to a boil, and cook until the sugar and salt have dissolved, about one minute. Drizzle the seasoned vinegar into the hot rice slowly, tossing as you go. Transfer rice to a bowl and let cool to room temperature.
*12-15 sheets nori
*3-4 ounce pieces of two or three of your favorite fish (salmon, tuna, yellowtail, cooked shrimp, sea bream), sliced into thin 2-inch pieces (as shown)
*1 bunch scallions, light green and white parts only, minced
*Japanese cucumbers, peeled, seeded, and sliced in very thin rods as shown above
*1 avocado, halved and cut into very thin slices
*spicy mayo: Mix together 3 tablespoons of mayo for every 1 teaspoon Sriracha
*sesame seeds (optional)
bowl of warm water
*pickled ginger and soy sauce for serving

When you are ready to roll, place a sheet of Nori, shiny side down, on your rolling mat or, if you are like us, and can’t find a rolling mat, your cutting board. Use your hands to spread a thin layer of rice across the lower half of the sheet, leaving a 1/2 inch border at the bottom and on the sides. Ask your helper for his or her first order. If she is like Abby she will say “Tuna, Cuke, Spicy Mayo, Scallion!” If he is like Phoebe, he will say “Salmon, Avocado, Scallion, Spicy Mayo!” If they are wary of the whole, you know, sushi aspect of this, they will say “Cuke, Scallions, Avocado!” and that’s fine, too. The fun of it is the participation and the creativity, but here are a few other combos we make on the regs:

Line up the preferred ingredients straight across the rice, keeping them in as narrow a stripe as possible. Then, lift the bottom end of the mat (or Nori) rolling gently, but tightly, until you have used up almost all of the Nori. If the roll is not sealing, dip your fingers in water, dot the edge of the Nori, and seal shut. (I promise to take a photo of this part next time and insert that image right here.)

Using the sharpest knife you have (I love my Miyabi), slice into six sushi-size pieces. (I’m usually in charge of this part, and usually I have to trim one side of the roll to make sure the slices sit flat. They all fight to eat this part teaser like it’s licking the spoon for cookie dough or something.) You might have to clean the knife after each roll. Place pieces on a platter and repeat until you have used up all ingredients. Sprinkle a few with sesame seeds if that’s your jam.

Serve with ponzu sauce or soy sauce and pickled ginger for dipping. 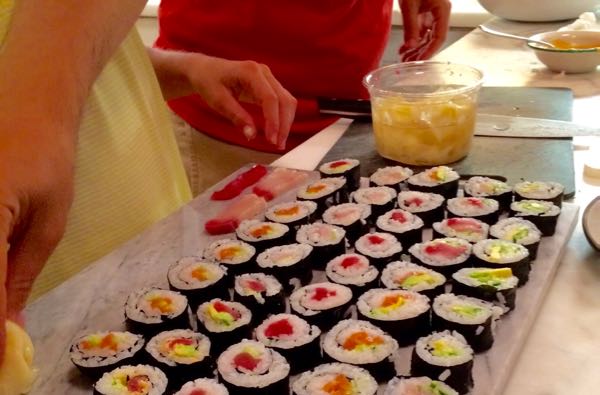 Related: Poke Bowls and It’s a Good Day for a Project

We love doing sushi at home when we have friends over, and make it even easier by doing hand roll sushi – just lay out all the ingredients, cut nori in half, and everyone makes their own. We also usually bypass worries about the freshness of the fish we can buy by going all vegetarian. Egg cooked w mirin and soy sliced into strips is a favourite, as is cooked sweet potato. We’ll always have avocado and cucumber on the table, and sometimes also sliced red pepper or steamed broccoli. We used to live in Japan and families would often serve this when we came over (with fish on the table too). It’s a great way to use up in the fridge, and my preschooler loves wrapping his own rolls.

I want to take on this project so badly. But I’ve been finding it impossible to find sushi-grade fish, even with the resources of Whole Foods. (Which apparently doesn’t sell sushi-grade?) Any hints on how you know the fish is safe enough to eat raw?

This is my problem too!

i love love love love this. How’s this for hilarity – we love sushi so much that my husband gave me a sushi kit 2, 3? years ago with a little mat and everything. We’ve used it…NEVER. This has inspired me greatly!

So, when you buy your fish, do you tell them it’s for sushi? Do they have special sushi-grade fish? Oh – I see in the photo it says ‘for sashimi ‘. About how much did you get? A pound? More?

We love sushi. But whenever we have tried making it at home, we find that the nori itself tastes fishy somehow, and is really tough to bite through. We have tried toasting it, but it still does not come close to restaurant sushi we have had.

Ha 🙂 I do Sushi with my two boys (Age 6 and 7), and it´s easy and fun (we even do it on weekdays when there aren´t other activities planned). I worked myself through the content of the fantastic blog “justhungry”, where you have full blown tutorials on how to make the rice properly. To eat less nori, I have been experimenting with rice paper – doesn´t look so good but I love the taste!

If you let them sit for a bit first, they are much easier to slice up without bits falling out and stuff going everywhere

I’m so glad you posted this!! I found the movie at the library and we pulled out the sushi making kit that my 11 yo received for her birthday and had a great Friday night!! Thanks for the inspiration!

I can try this with my kids! But minus the raw stuff! They only eat California rolls!

I just love this! You should also try Sushi Sandwiches, an Adam Liaw recipe 🙂 makes great lunches the next day!

Thanks a lot for the recipe and the detailed description of each step. I’m a big fan of sushi and wish to learn to make this dish at home.