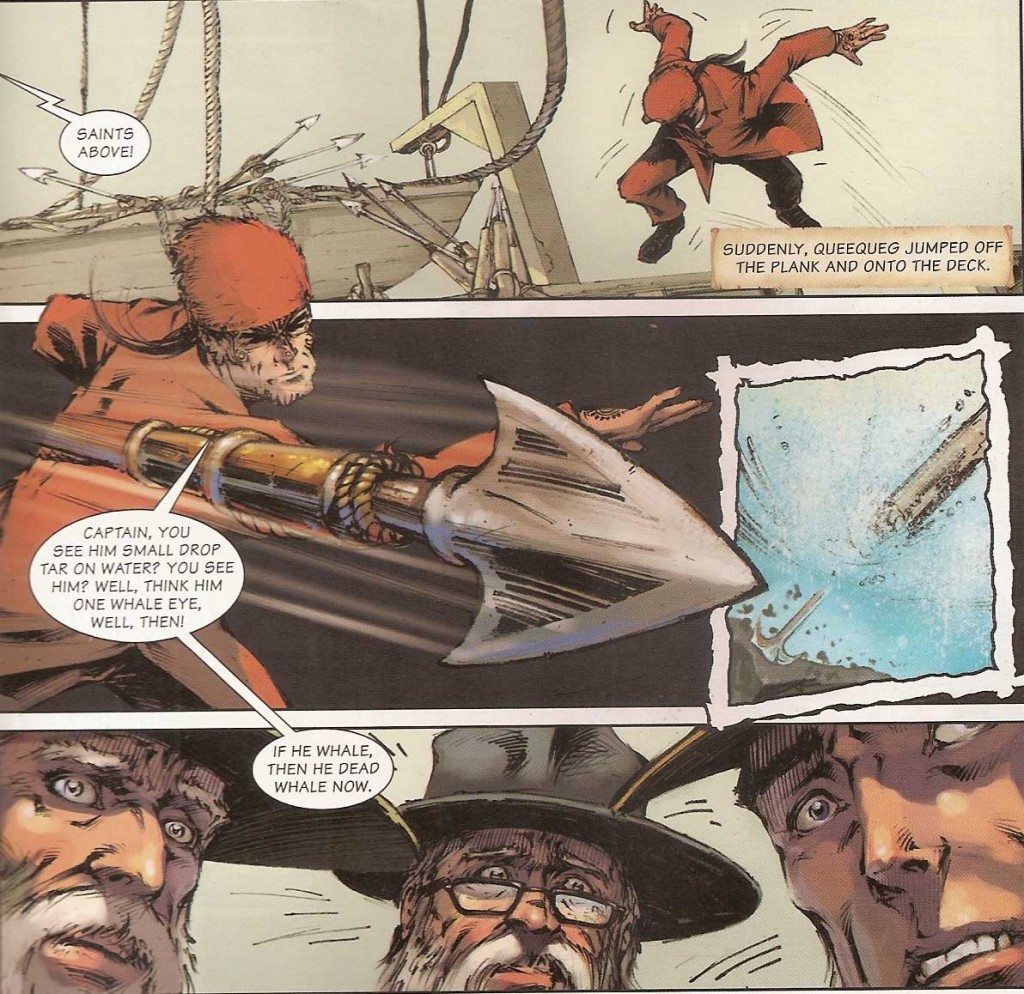 .
As parents — and English majors — we take a great deal of pleasure in introducing our kids to the Good Books. In a way, I feel like we’ve got all of our favorites just cued up, waiting to roll ’em out when the kids are ready: The Catcher in the Rye (we handed this one to Phoebe last summer), Tess of the D’urbervilles, Pride and Prejudice, The Tempest, Watchmen, Crime and Punishment, To the Lighthouse, US Weekly. We’re constantly asking ourselves, as we hurry-up-and wait: Are they ready yet? Is it too soon? And the answer, usually, is: No, they’re not ready yet, and yeah, it’s too early. But there’s something cool going on in the book world lately, and it is happening — no surprise — in the world of graphic novels. In the past year, our shelves have been filling with graphic adaptations of classic — or at least really really good — books that might not be quite the same as the real deal, but are pretty damned close. And a perfect, friendly introduction to the things that will sustain and inspire them, when they’re just a little older. Here, Phoebe (11-year-old, Nerd Alert blogger) describes a few of her recent favorites.
. 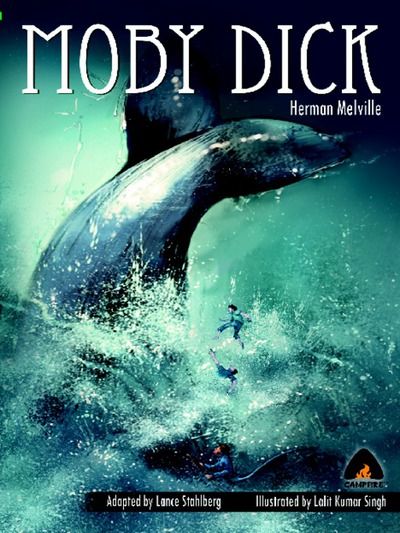 .
Moby Dick (Herman Melville) adapted by Lance Stahlberg, illustrated by Lalit Kumar
Who Would Love It: People who can handle stuff that’s a little hard to understand. They basically take the words from the real book, which can be old-fashioned, and they put them in speech bubbles and add drawings around them. If you took away the pictures, it would basically be the grown-up book. But the art is so awesome. It’s definitely adventure-y.
The blurb I’d put on the back of the book: “The fascinating story of the search for a famous white whale — the perfect book for any kid who likes it when climaxes come at the very end of the book. Which, who doesn’t?”
Ages: 11+
The Odyssey (Homer), by Tim Mucci
Who Would Love It: People who like Greek mythology and people who like to read simplified versions of big, complicated stories. Here, you’ll meet Athena, Hermes, Zeus, Poseidon, all that jazz. It’s also really cool-looking, too — I love the artwork. It helps to understand it.
The blurb I’d put on the back of the book: “A mystical adventure in graphic novel form. That sounds cheesy — but, you know. It’s true!”
Ages: 11+
. 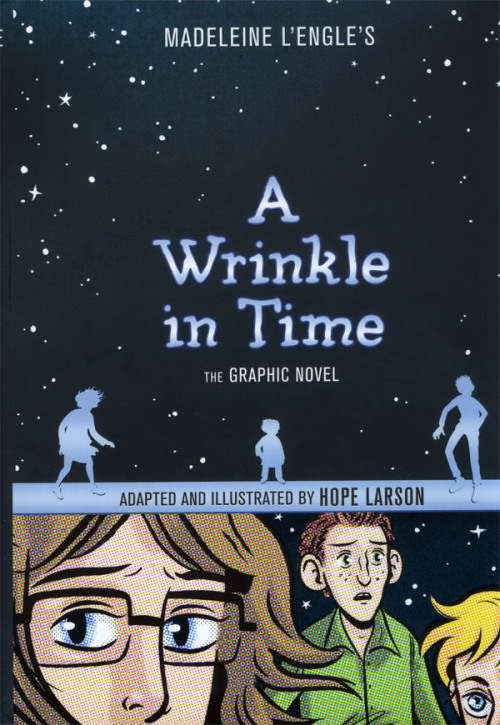 .
A Wrinkle in Time (Madeleine L’Engle), adapted and illustrated by Hope Larson
Who Would Love It: The first time I tried to read the actual, real book, I could barely get past the first chapter. It was so boring and confusing. I was in third grade, so I had trouble understanding any of it. But then, last year, I got the graphic novel version and it was just way more interesting. It all made sense. It seemed like the plot was more interesting, more exciting. This is for people who are science-y and also into fantasy. Those of you who like physics will like this, too.
The blurb I would put on the back of the book: “An interesting book, in the best way. The art makes this an even more bold version of the original – it’s, like, BOOM.”
Ages: 5+
.

.
Alice in Wonderland by Tommy Kovac & Sonny Liew
Who Would Love It: This is by the guys who did the Wizard of Oz graphic novel series, which I love. To be honest, I’m going to say that the actual story was not as interesting as some other books, but the art is really incredible. It’s worth it just for the pictures. Even though it’s maybe not my favorite book, reading-wise, it’s weird fantasy and that’s kind of cool, no matter what, right?
The blurb I would put on the back of the book: “The artwork — scratchy, strange, and mystical — makes this an essential book for kids who love good art.”
Ages: 10+
. 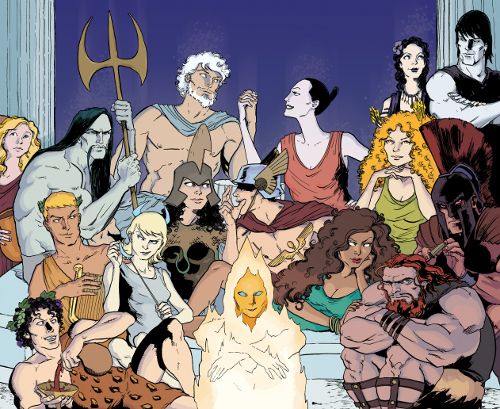 .
The Olympians Series by George O’Connor
Who Would Love It: Dad, we’ve already done this series like twenty times.
The blurb I would put on the back of the book: “Just read this series, okay?”
Ages: 6+
. 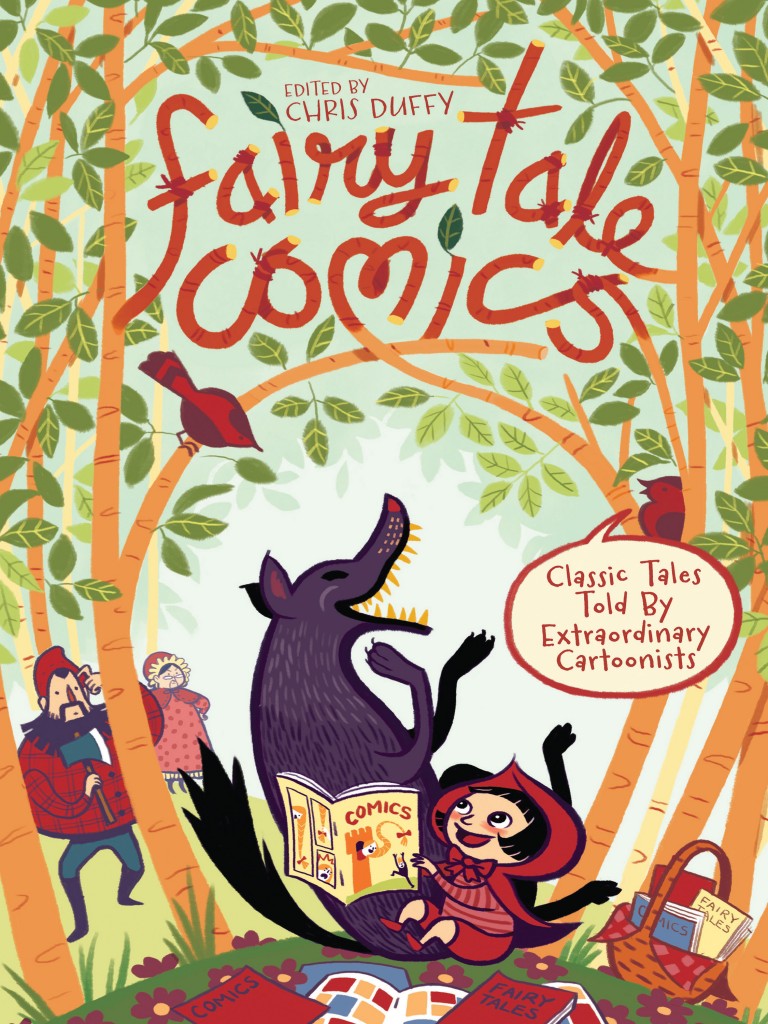 .
Fairy Tale Comics Edited by Chris Duffy
Who Would Love It: People who are fans of the extremely awesome Little Lit books. It’s really clever. It’s interpretations of famous fairy tales by well-known artists and writers like Brett Helquist (who did Lemony Snicket), Raina Telgemeier (who did Drama and Smile), and Cherise Harper. If you like silly stuff, clever stuff, this book is for you.
The blurb I would put on the back of the book: “An amazing group of authors re-telling an even better collection of stories. Even if you’ve read these stories before, and loved them, you’re going to love the way they’ve remade them here.”
Ages: 6+
. 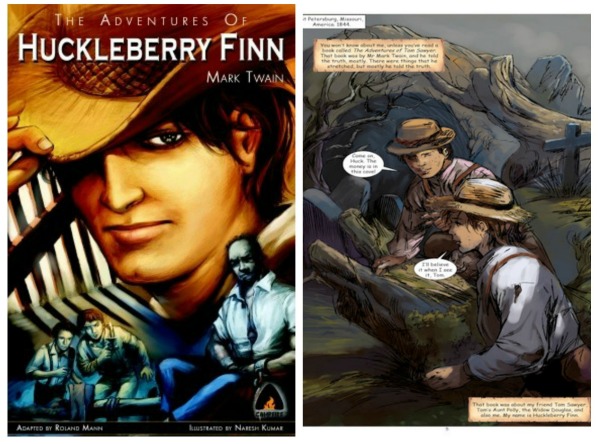 .
Adventures of Huckleberry Finn (Mark Twain) Roland Mann, illustrated by Naresh Kumar
Who Would Love It: Well, technically, I haven’t read this one yet. It’s on my wish list. I read the real book, but the graphic version looks awesome. The actual book is an extremely good perspective on a boy who runs away with a slave named Jim like a hundred and fifty years ago — and their adventures, and misadventures. It’s hard to explain it all here.
The blurb I would put on the back of the book: “I don’t have to read this to know that it’s a really really really really good book.”
Ages: 8+

Thanks for the tip! Headed to my 1st graders’ book fair today and will look into graphic novels. I hadn’t thought of it before, but why not? He’s a beginner reader who just discovered comic books.

YES! My 11-year-old was begging me to read A Wrinkle in Time when he finished this graphic novel. I was, like, “Um, yeah, I’ve actually read that one.” He was also, then, very keen on the tesseract featured in last week’s Agents of Shield (which is the only weeknight television he watches, and only if he’s ready for bed first!). I’m excited for him to try all of these, and excited for him to read the whole Wrinkle in Time series. Thanks, Phoebe!

Thanks for this list and I am so happy! – I finally found a Little Lit book available here – my boys will be very pleased. Maybe I’ll even be able to tear them away from Minecraft for a little while.

I loved seeing this–even though I am not a Mom because hey, maybe that Moby Dick version would be good for me too since I have never been able to get through it?? I live in France where les bandes dessinees (comic books) are given mega credit–there is a huge section for them in my local library!

these would have helped me so much when i was in that per-adolscent stage. so glad to know they exist now:)

Was just in the book store looking for graphic novels and there wasn’t enough to choose from, so thanks for the tip. My sons’ appetite for the “Wimpy Kid” & “Big Nate” series appears to be never-ending. Need more choices!

Glad this was helpful. Just a reminder for graphic novel fans, that Phoebe has a lot more recommendations (for graphic novels and otherwise) on Nerd Alert
http://nerdalertonline.blogspot.com/

The first two have made their appearance in our house, and were hits. So excited to try out the rest!

Got my kids the graphic novel version of Romeo and Juliet before taking them to a fabulous production of the same in our local park. Very modern with cell phones incorporated brilliantly and hilariously. We were all having a ball, until the poor actress playing the nurse tripped on some uneven paving stones and dislocated her shoulder. (She recovered quickly and was back before the run was over, but unfortunately we couldn’t make any of the later performances.) But the graphic novel was a great way for them to get familiar with the plot ahead of time. I’ll definitely do the same thing before our next Shakespearean foray.

Thanks for the recommendations. My son (11 years old) really enjoyed a graphic novel version of Great Expectations a couple of years ago. There’s so much great stuff happening in the world of graphic novels. So exciting.

For much younger kids, check out
http://www.mycozyclassics.com/
They are board books that illustrate the classics with felt miniatures. Our 16 month old loves them!

My Grandson is going to be 13 in December and doesn’t like to read but is very interested in Mythology. Do you think these Olympians Series would be too young for him? He also loves Anime and Pokemon, wrestling and video games.

My 6-year old daughter has an insatiable appetite for graphic novels thanks in a large part to your previous recommendations. She just told me today that she wants to write comic books when she grows up ( nothing like that to make her mama proud!). I can’t wait to introduce Wonderland to her!

have you guys seen the new harry potters with cover artwork by kazu kibuishi? needless to say, they’re amazing (though i was never a big fan of the original artwork in the first place). and when all seven books are lined up, the spines combine to make a magnificent hogwarts. bonus!

Hehe…I am guilty too, of “strongly” recommending books to my kids…I sneak on my son’s library account, request books for him and hope he will read them! Thanks for the awesome rec’s!

Thanks so much for the Odyssey recommendation. I got the book for my son and he loved it. I would never have gotten him the book if it weren’t for your recommendation – so keep them coming!

just discovered: the 10-volume Buddha manga by Osamu Tezuka. Awesome – I know what my 14-year-old will be getting for her birthday!
enjoy
r.