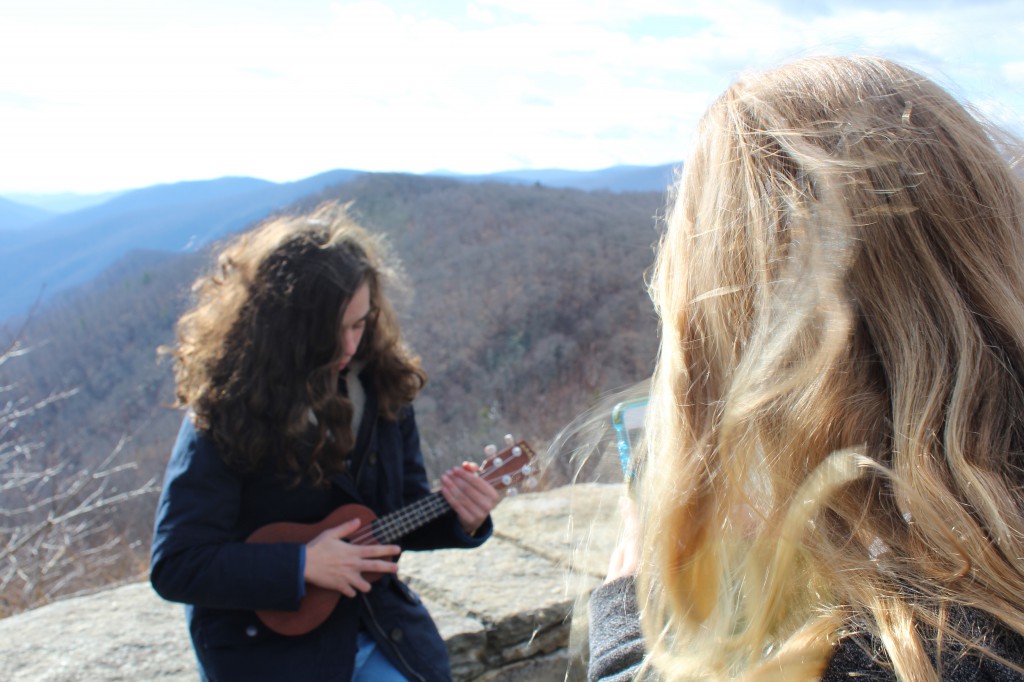 It’s funny to see “Virginia” in my Vacation Highlight Reel category, because Andy grew up there and I’ve been visiting his parents for long weekends and holidays since 1994, when we were newly dating college kids wearing Doc Martens (him) and oversized DKNY sweaters (me). But Andy’s from Northern Virginia, which, he always tells me, is really a DC suburb, and not what real Virginians call “real Virginia.” In fact, I’d never seen much of the state beyond the I-95 corridor and a battlefield or two. So over the holiday, we decided to use the short time we had to get a little taste of Real Virginia – or, maybe, Another Virginia. Here’s the run-down. 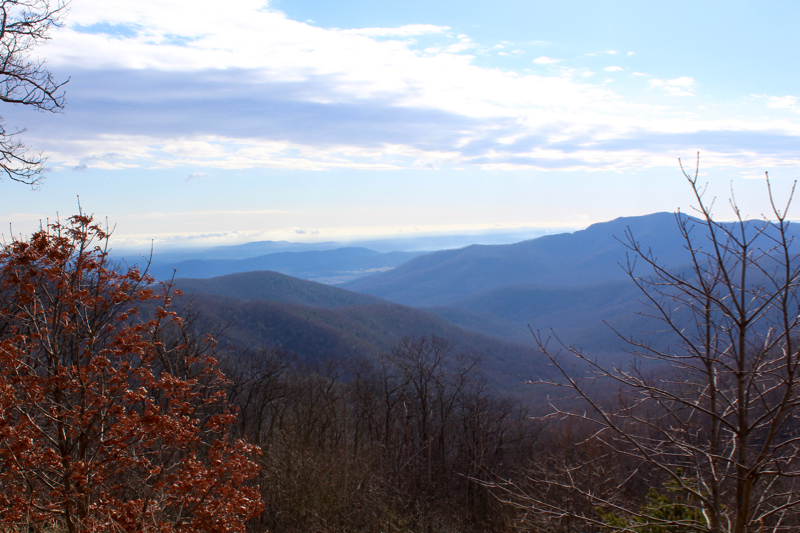 We headed southwest from Reston, driving toward Front Royal, the northern-most entrance to Skyline Drive in Shenandoah National Park. Skyline Drive, a public works project that was built in the 30s, runs 105 miles down the backbone of the Blue Ridge Mountain range, and offers dramatic overlooks (above) of the state park around every turn. Or at least they’re dramatic when the weather is good. Though it was a little cloudy outside the park, once we were climbing (highest elevation: over 3600 feet) we could hardly see more than 20 feet in front of us. It wasn’t the greatest start to our road-trip but luckily Skyline Drive offers several turn-off points along the way, and our pass was good for a week.  We cut off at Thornton Gap and headed west towards our main destination. 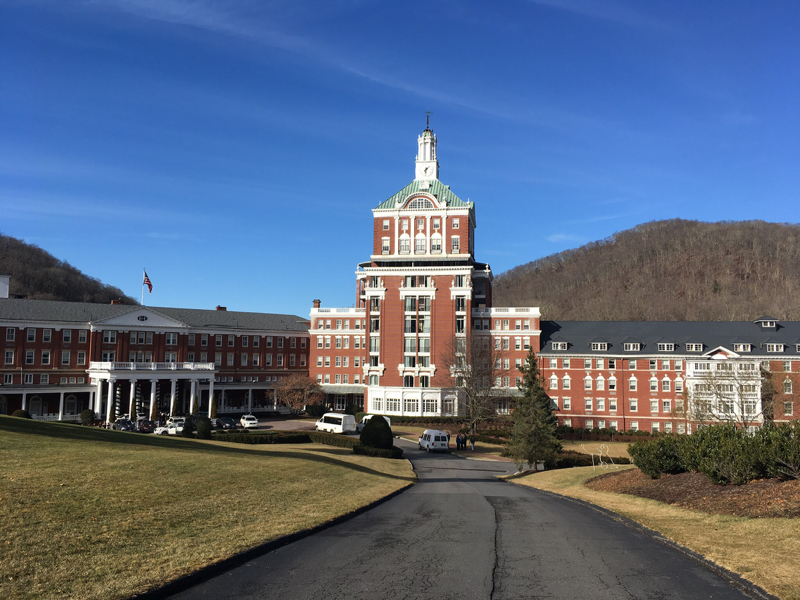 Our main destination? The Omni Homestead Resort, in Hot Springs Virginia. In general, we are not really resort people — more like Airbnb-ers — but two nights at this 250-year-old historic hotel really makes me question that. The place was amazing — a perfect two-day, mid-winter, family-friendly mini-adventure. Andy’s Uncle Doug recommended the hotel, and it’s the kind of place that counts lawn bowling, falconry, and archery among its hundreds of amenities. It’s the kind of place where you find yourself describing everything as “grand,” like the 100-plus-years indoor pool, the gigantic column-lined lobby, and of course, the towering facade that seems to spring up from nowhere after winding through hours of rural Virginia country roads. The hotel is massive, offering all the expected amenities, too, like pools, spas, restaurants, golf, kayaking and hiking when the seasons permits. It’s also physically massive. Phoebe, who was wearing her new fit-bit (thanks, Santa) calculated the walk from our room to the indoor pool at just over a quarter mile. But along the way, of course, you get to walk through… 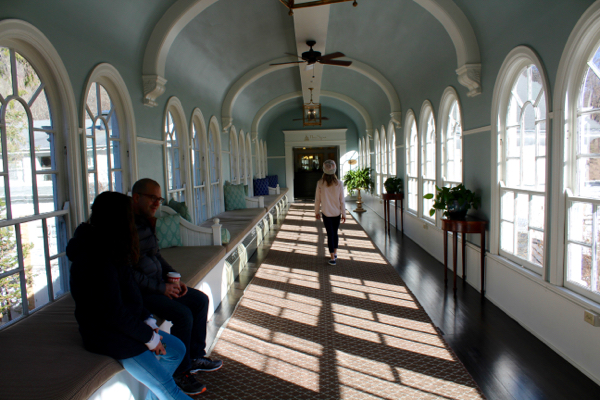 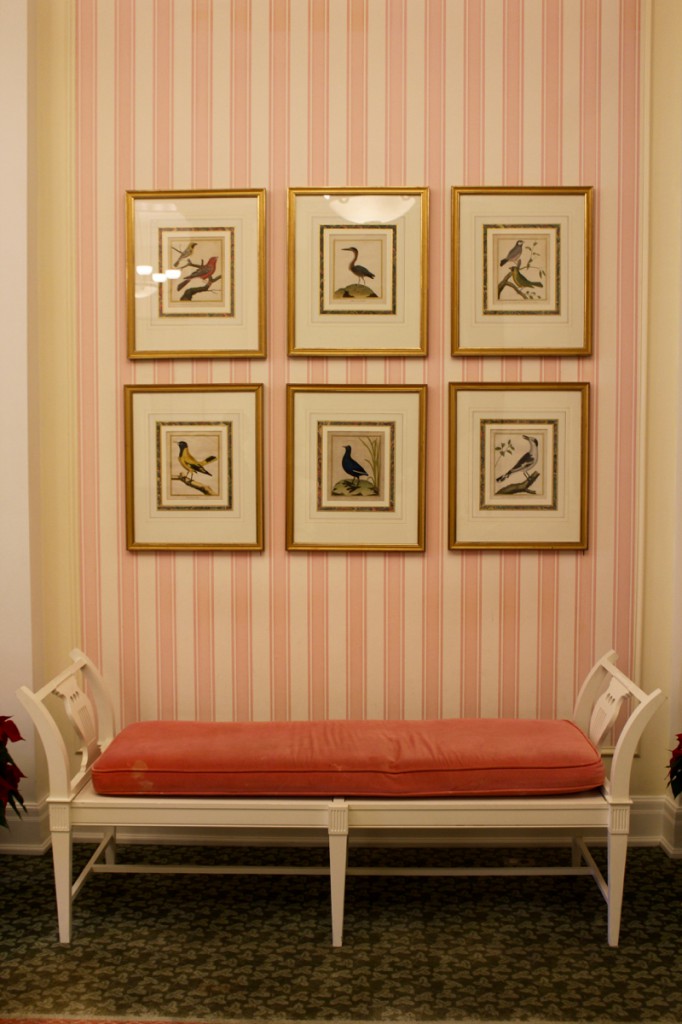 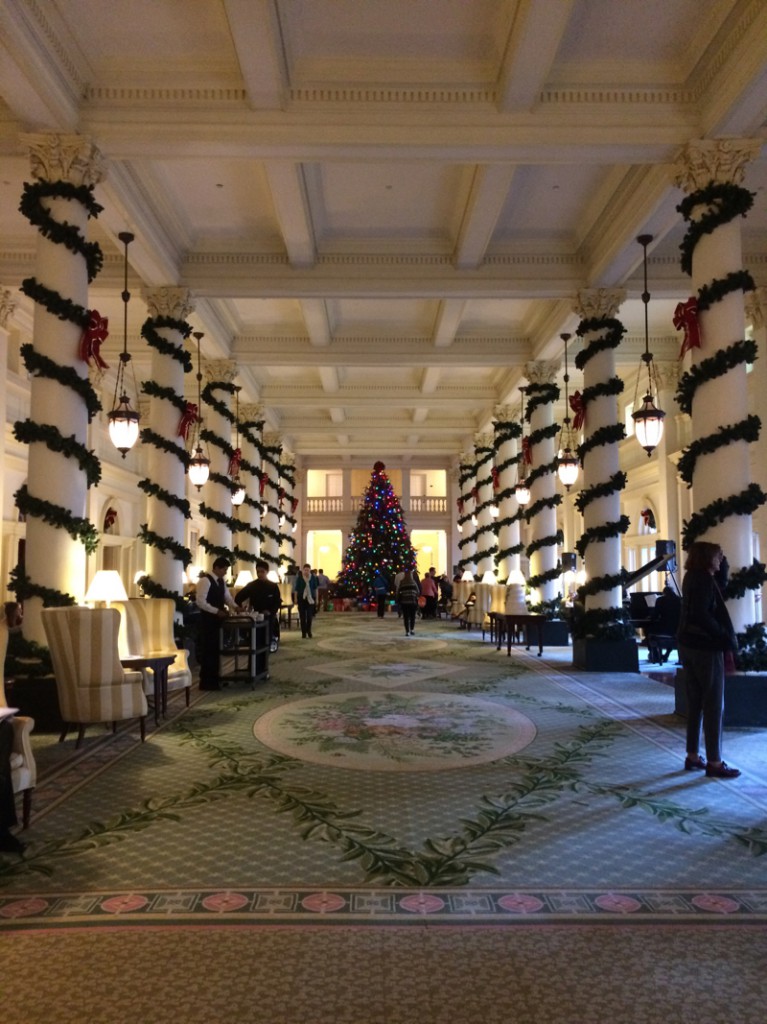 And, of course, cross the Great Hallway in the lobby where people sip cocktails, eat their Tea Time treat (how great is the Tea Time tradition), lounge by the many fireplaces, greet arriving friends, hug departing friends…all to the tinkling of a tuxedo’d pianist playing Sinatra and other classics. Even when the lobby is not festooned in evergreen garlands and Christmas lights, I imagine it’s still pretty Great. 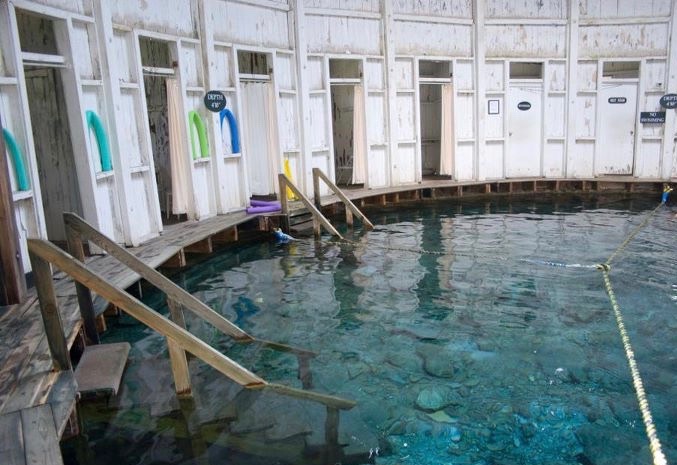 The coolest thing we did all week was take a dip in the Jefferson Pools, warm natural mineral springs a few miles from the Homestead. (The hotel offers a shuttle service if you don’t have your own car.) The pools gained fame for their healing powers and throughout history, people have traveled from all over the country to soak in the naturally-at-body-temperature waters, including Thomas Jefferson himself in 1818. There are two main ca. 1700s structures — one for men and one for women, but they also offer “family soaks” for kids and parents. Since water was at body temperature, it was no problem whatsoever wading around in the pools for over an hour. This is definitely something we’ll remember for a long time, and not just because Abby used her new gopro (thanks Uncle Mike!) to document the experience and set it to decidedly non-1700s-style music. 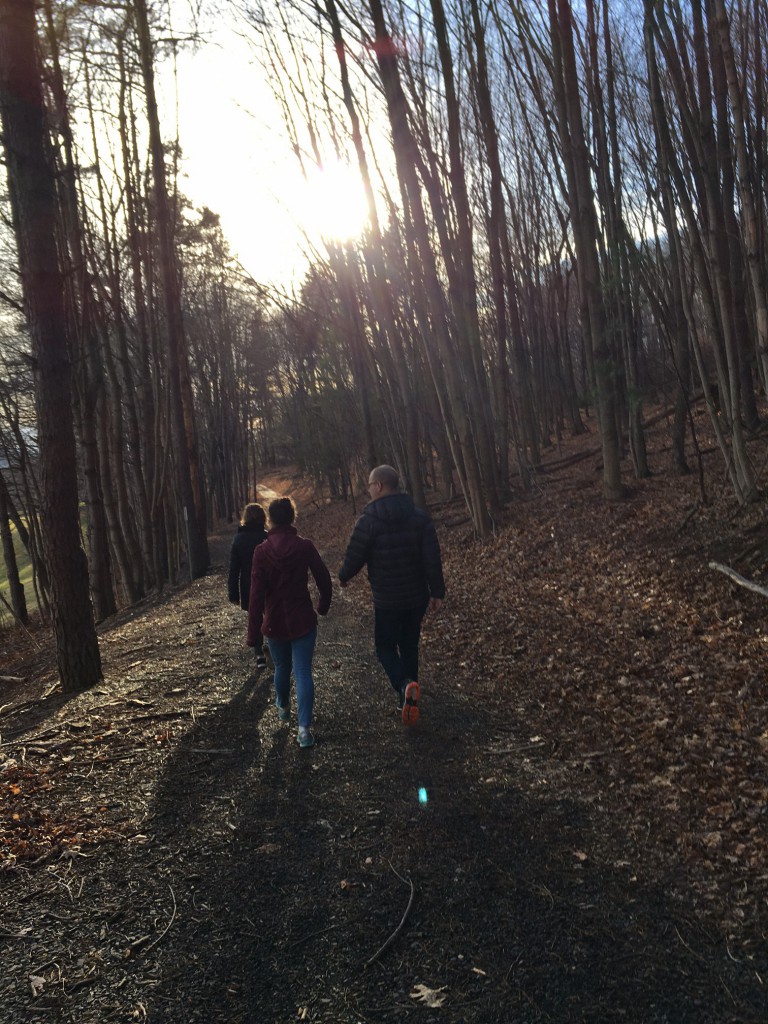 On our first full day in Hot Springs, we lucked out on weather so decided to go on a six-mile hike which started across the street from the hotel, at the edge of the hotel’s golf course. It was beautiful, but for some reason, after about two miles, I became obsessed with the idea that there were bears in the woods. (Maybe because when I asked the concierge if there were bears in the woods she replied something like, “Of course. Bears live in the woods, you knucklehead Not-Real-Virginian.” (OK maybe reading into that slightly.) The deeper we went into the hike, the more petrified I became, scanning the woods, shouting “HEY BEAR” like we learned to in Alaska, while my family ridiculed me. “Yeah, we could run into a bear,” said Andy. “We could also get hit by an asteroid.” Joke’s on them, though. Because as we drove out of the park the next day, guess what we saw, from the safety of our 50-mph-moving station wagon? A BLACK BEAR ambling up the hillside by the road. (I named him Vinny, short for Vindication, and PS I’m never hiking again.) 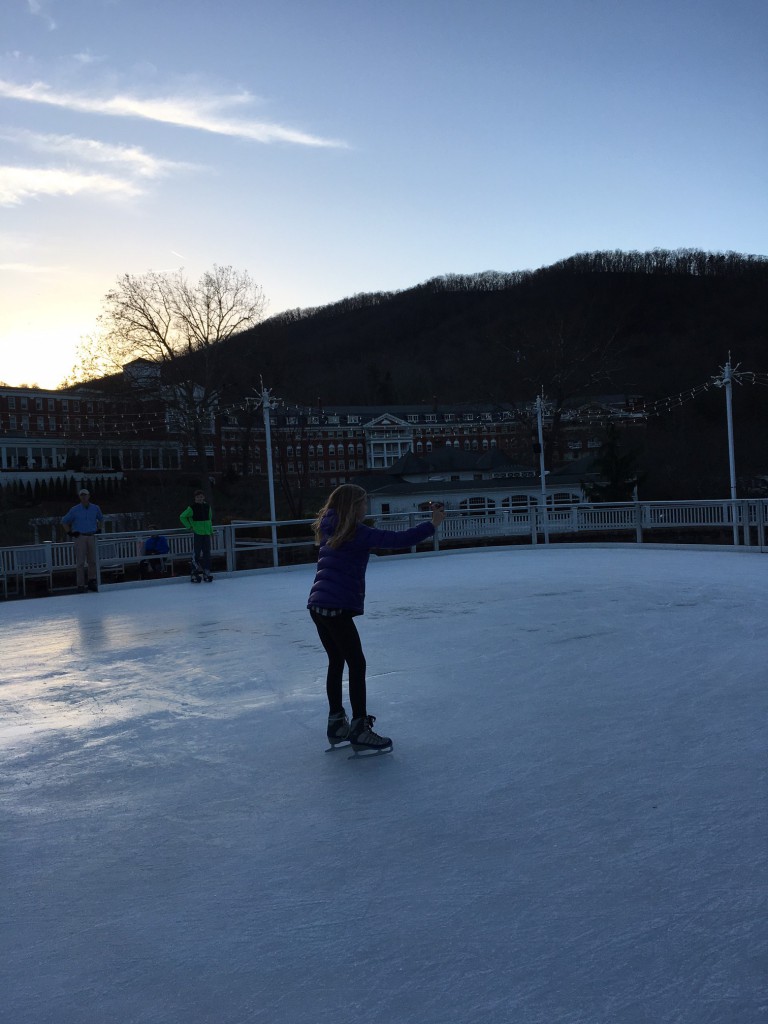 Back at the hotel, the girls went ice skating at the charming little rink, which was all lighted up at dusk a few minutes later. 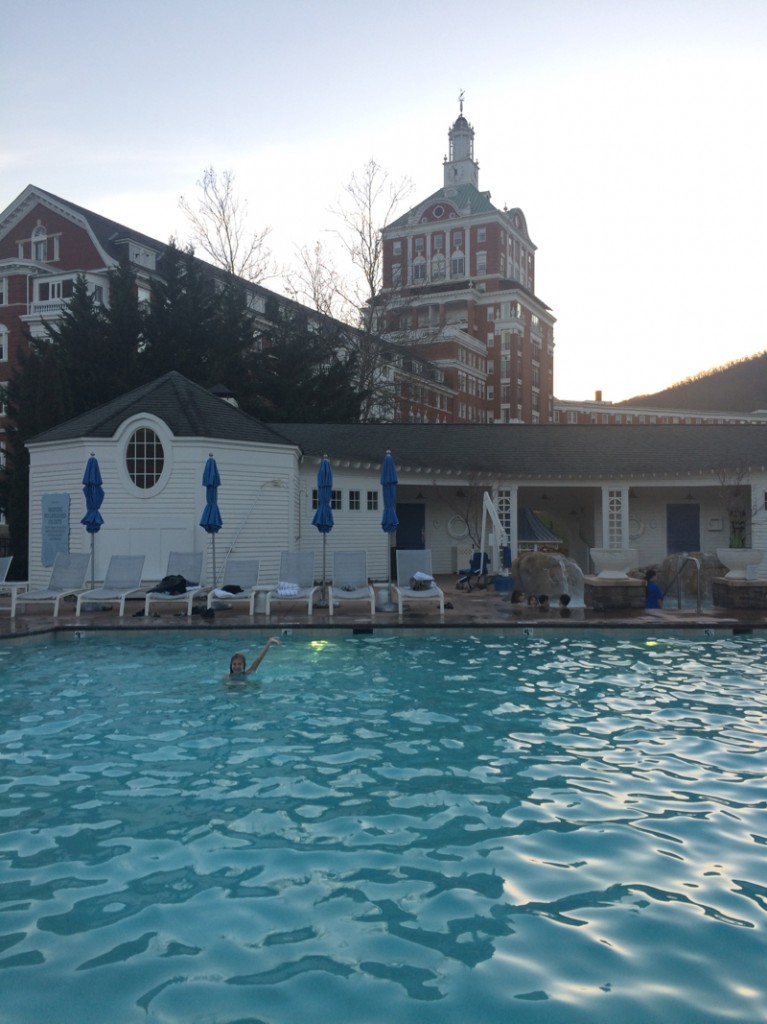 Then, naturally, went for a dip in the heated outdoor pool right next to the rink. 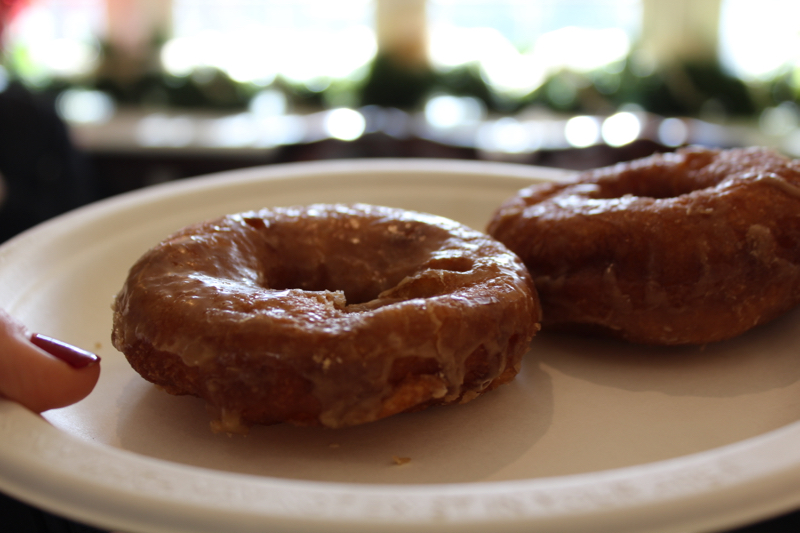 Other than the buffet in the main dining room — which was too much for us, both in dollars and in food — there was really only one option for breakfast: Martha’s Market, where you could pick up a decent cup of coffee, yogurt, green juices, bagels, and, much to the girls’ delight, still-warm glazed doughnuts. Other dining highlights: On our second night, we hit Les Cochons d’Or in town, a small mostly locally-sourced French spot. They were booked solid (apparently not unusual), but we managed to snag the chef’s table, facing the kitchen as we ate our coq au vin and mushroom risotto. 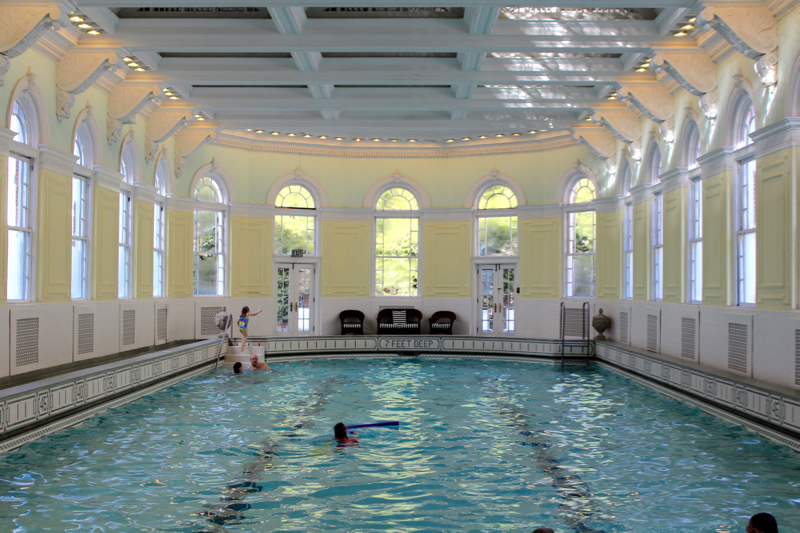 Have you ever seen a more beautiful indoor pool in the world? I never even actually went swimming, but it didn’t matter. Reading on a lounge chair here? I could’ve stayed forever. (It was built in 1904 and is also fed by the natural warm springs of the region.) 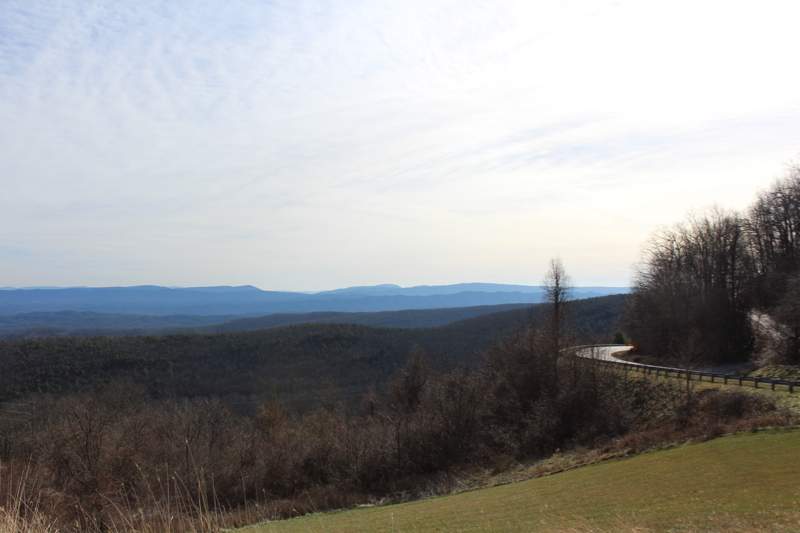 Two days later we were back on the road, heading northwest by way of… 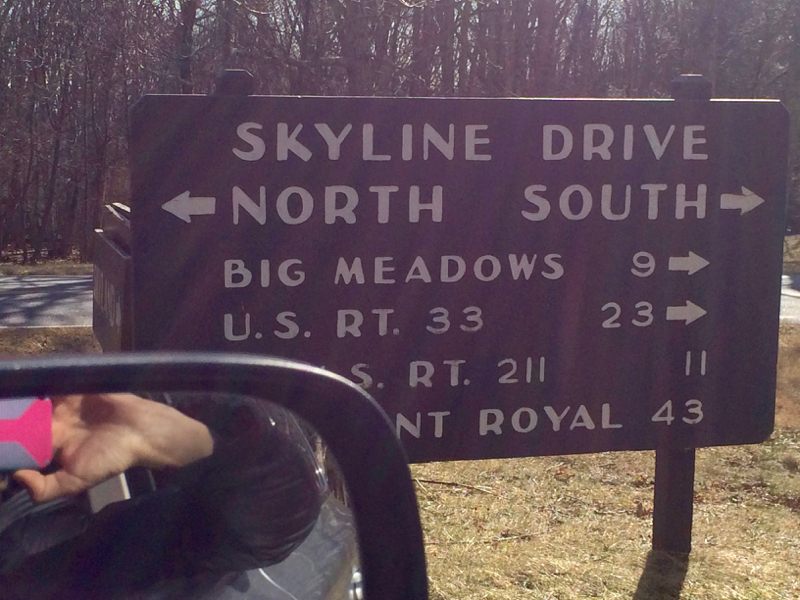 …Skyline Drive. This time, we lucked out with weather, and managed to take in about a 50-mile stretch. 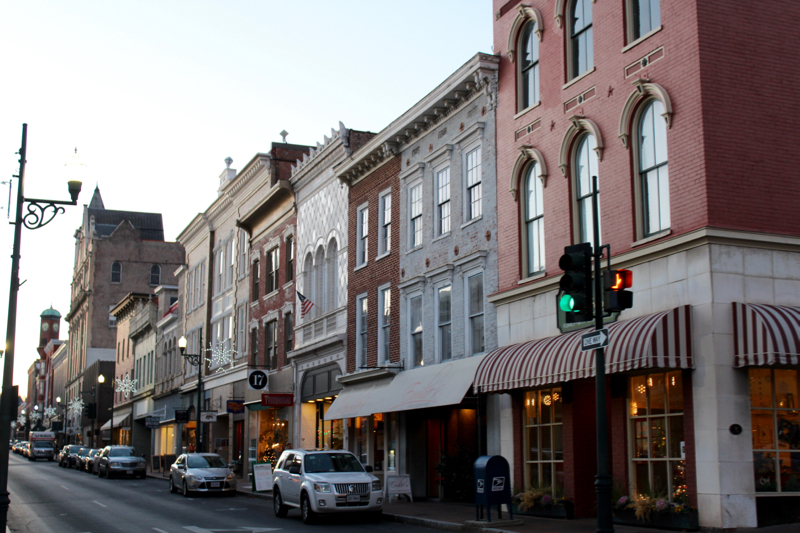 We stopped in Staunton, Virginia, home to Civil-War-era main streets that look like movie sets. We arrived around lunchtime, picked up a few sandwiches, then walked around town, through the stunning yellow-brick campus of Mary Baldwin University, around churches, and finally landing at Woodrow Wilson’s birthplace. How’s this for luck: It was December 28, which also happened to be Woodrow Wilson’s birthday, which also happens to be the day every year that admission to the birthplace museum is free from 1:00-3:00, which happened to be the time we ambled by. 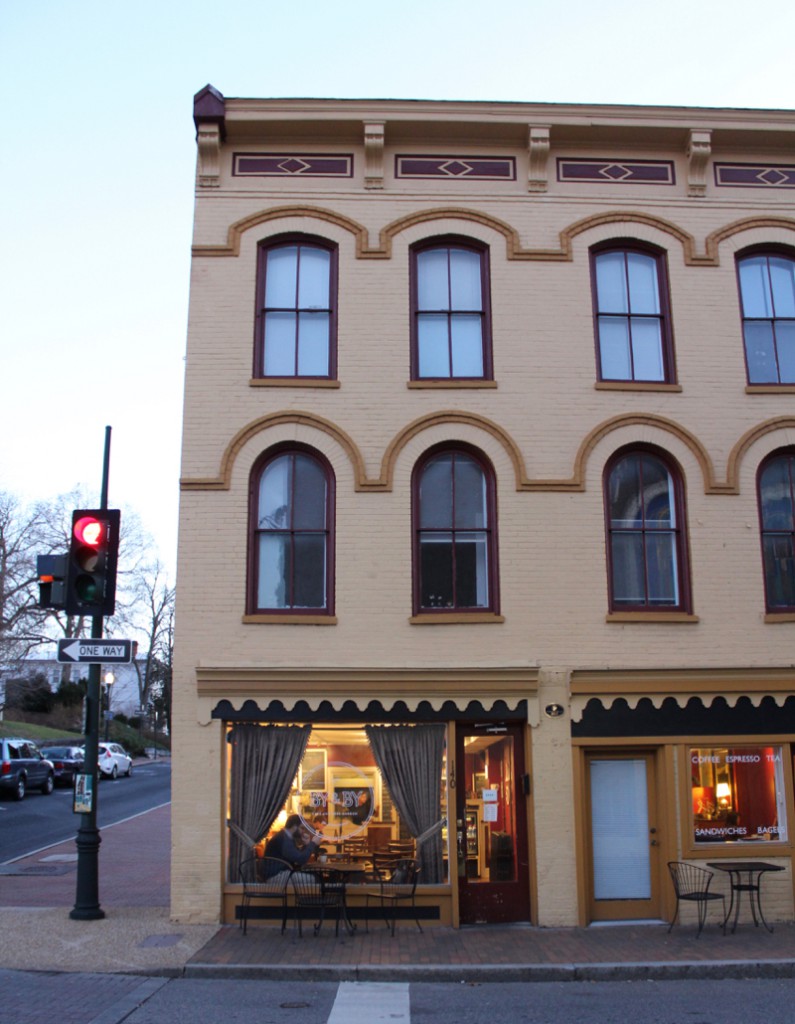 We had a cup of coffee and a snack at By & By, then later, we ate cast-iron cornbread and Virginia-peanut-crusted fish at Zynodoa for dinner. (And to answer your question, yes, every building looks like this.) 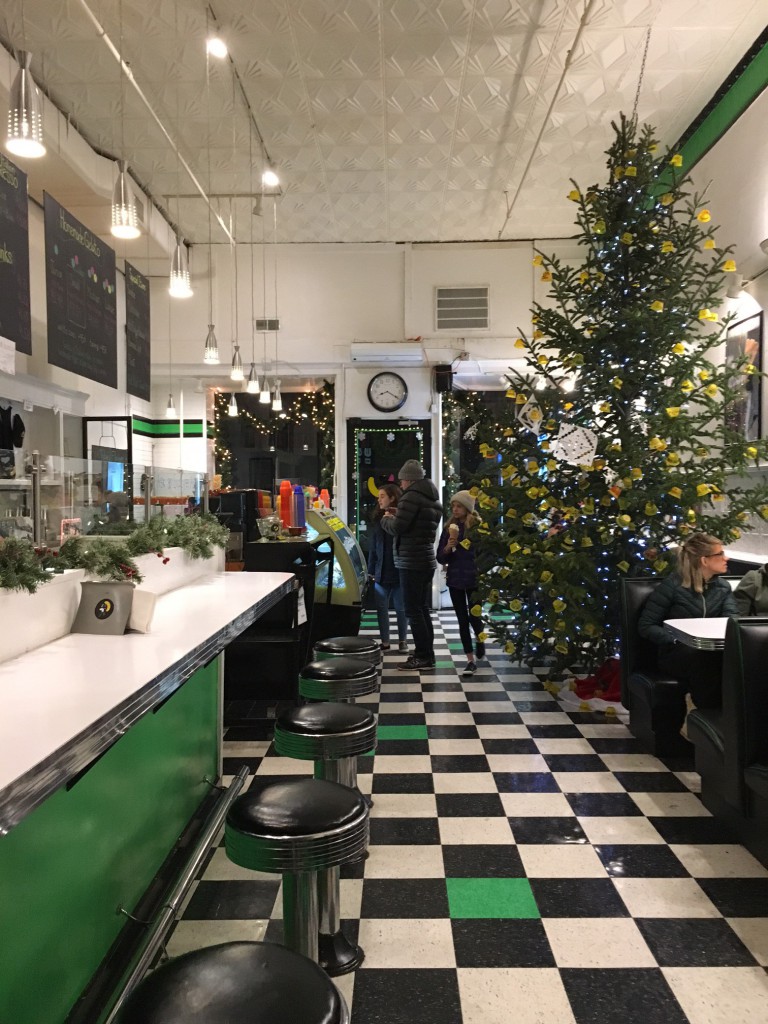 It was pretty chilly that day, but of course, not too chilly to top off our dinner with the housemade gelato at The Split Banana. I’m totally replicating that randomly green checkered floor next time I remodel a kitchen or bathroom. 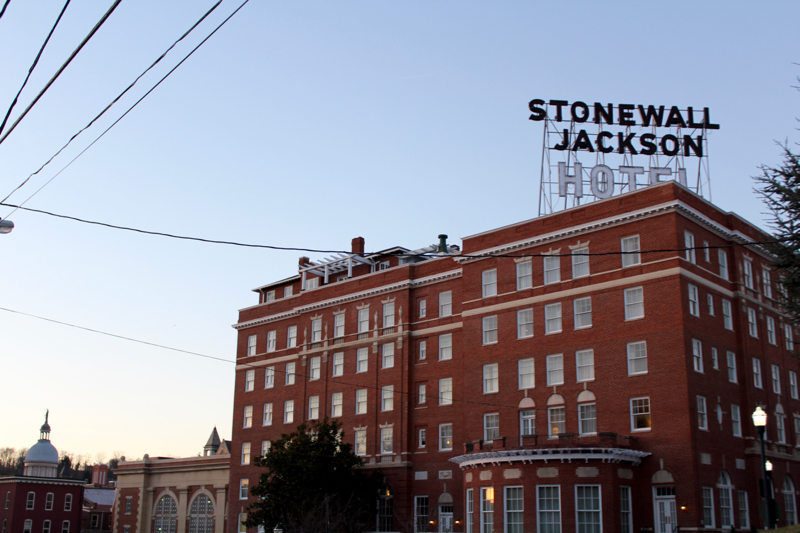 We crashed at the Stonewall Jackson Hotel, which was right in the middle of town, convenient to just about everything. 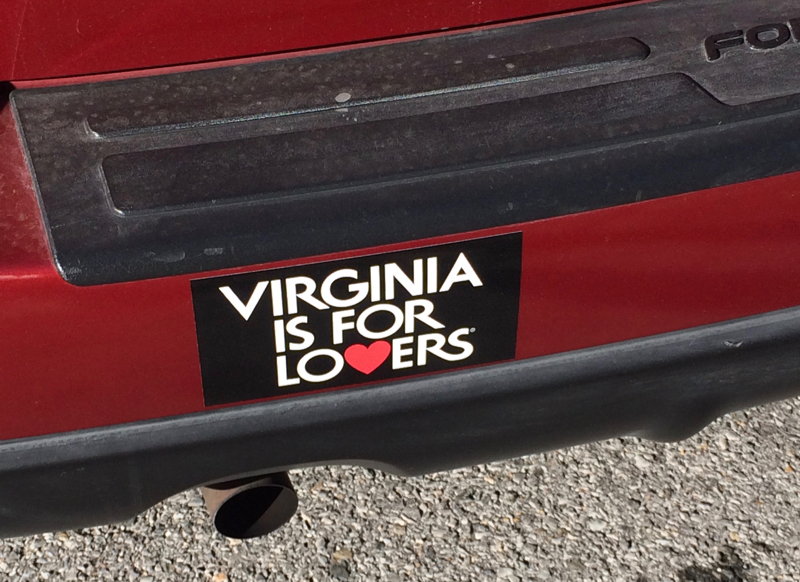 P.S. Totally off-subject: Does anyone notice anything different about the blog today? 🙂

My mom lives in front royal! Isnt skyline drive amazing?? I love visiting her there. The mountains are gorgeous!

I live in Reston and lived in VA my whole life. You definitely hit some high points, but should go down to Charlottesville where I grew up (college visits anyone?) Its a great town, GREAT restaurants, and some deep history thanks to Thomas Jefferson.

glad to hear you enjoyed my hometown with the Homestead 🙂 I grew up around there – it’s a gorgeous place.

Looks like a nice family trip 🙂 I really enjoy Virginia too, especially the Blue Ridge Mountains and Grayson Highlands Park with wild ponies. Glad you had a good time and thanks for sharing.

I have run in those woods and worried about bears too! In large part because I had just finished Off the Grid by CJ Box which features a (based on real life) bear who hunts people.

I second the Mrs. Rowe’s rec! Grew up in C’ville & Richmond and this post made me super nostalgic for my parents weekend rambling drives along Skyline Drive. Of course I complained a LOT at the time about how BORING they were. Next time you go back, hit Charlottesville and don’t miss Crozet Pizza in Crozet!

This post makes me homesick (but also really happy)! I’m from Northern VA and lived in Harrisonburg (just north of Staunton) for seven years. I now live in Frederick, Maryland, and I love it, but I’m a Virginia girl at heart! Frederick is a popular foodie destination for NOVA and DC residents — you all should pop up next time you visit Andy’s family! I also agree that your family would enjoy Charlottesville, and also Richmond! You could do a few days in Charlottesville and Williamsburg for the food and history, and then head to Richmond for a night at the Quirk hotel. Seriously hit me up in the future for recommendations — I’d love it!

Stunning photos! thanks for sharing these beautiful pictures with us.

Wow, I love this post. Your photos are so amazing!

Just found this while looking up the accidental broccoli recipe again. We live in Staunton, and are equally obsessed with Zynodoa’s broccoli, and everything else about the Shenandoah Valley and Staunton that you mentioned. So glad you visited! Come back soon! We’ll take you to Chicano Boy tacos next time ; )