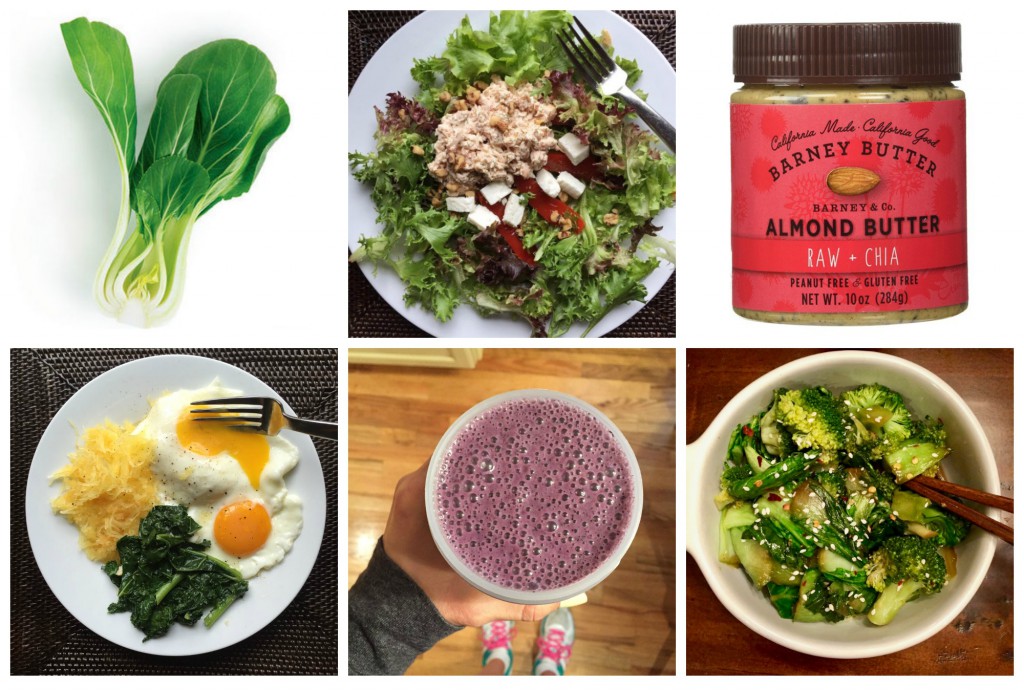 How ya doing on those New Year’s resolutions? I’m pleased to report that it’s only Day Five of 2017 and yet I’ve already checked off THREE of my big ones: Edit and organize passwords on important accounts, book mammogram, and start every single day with a Starbucks Grande Pike or its caffeine equivalent. (I take it to heart to set the bar low.) Seriously, I imagine a lot of you are logging on today looking for some recipe redemption ideas, but you know me by now — I’m never going to be your go-to resource for overhauls or omission-based diets. Instead I thought I’d share something a little more realistic: A One-day Reset Menu that you can bookmark and come back to next week or next month, after you’ve decided that Bloodtype Diet or that Alkaline Diet or that Eat-Literally-No-Food Diet is not for you. Or even just for one of those Mondays after a weekend of not-necessarily mindful eating.
.
It was that kind of day a few weeks ago when I asked my friend Julie Fischer to put together this daylong meal plan for me. Julie is a mother of two and one of those super fit people who can talk eloquently about the health benefits of turmeric, who knows exactly where to buy coconut aminos and why, and if I had to take a guess, probably drinks eight glasses of water a day. She comes by this honestly — she’s a health and nutrition coach, and discovered the healing power of food after being diagnosed with MS in 2011. By first omitting gluten, then omitting other grains, soy, and refined sugars, she found she could dramatically reduce fatigue, anxiety, and other debilitating symptoms that she had been fighting for years. The effect was so life-changing that she’s since devoted herself to preaching the gospel of the power of food. (You can read her whole story here.) What I love about this day-long meal plan is that it’s real food, with real flavor; it’s packed with vegetables you actually want to eat (as opposed to “choke down”) and most of the dishes don’t require measuring gear or even recipes. (Julie herself follows a paleo-inspired diet that is based on protein, vegetables, and healthy fats.) Also not insignificant: Her son was once overheard bragging about how good his mom’s Bok Choy was — below — which is definitely saying something.
.
Will I eat so well every day in 2017? Of course I won’t. But I’m so glad to know this line-up is here whenever I need it, all year long. Thank you Julie! (PS: Receive a three-day reset plan when you sign up at Julie’s website, Healthy on Hudson. For daily inspiration and meal ideas, you can also follow her on instagram.)
. 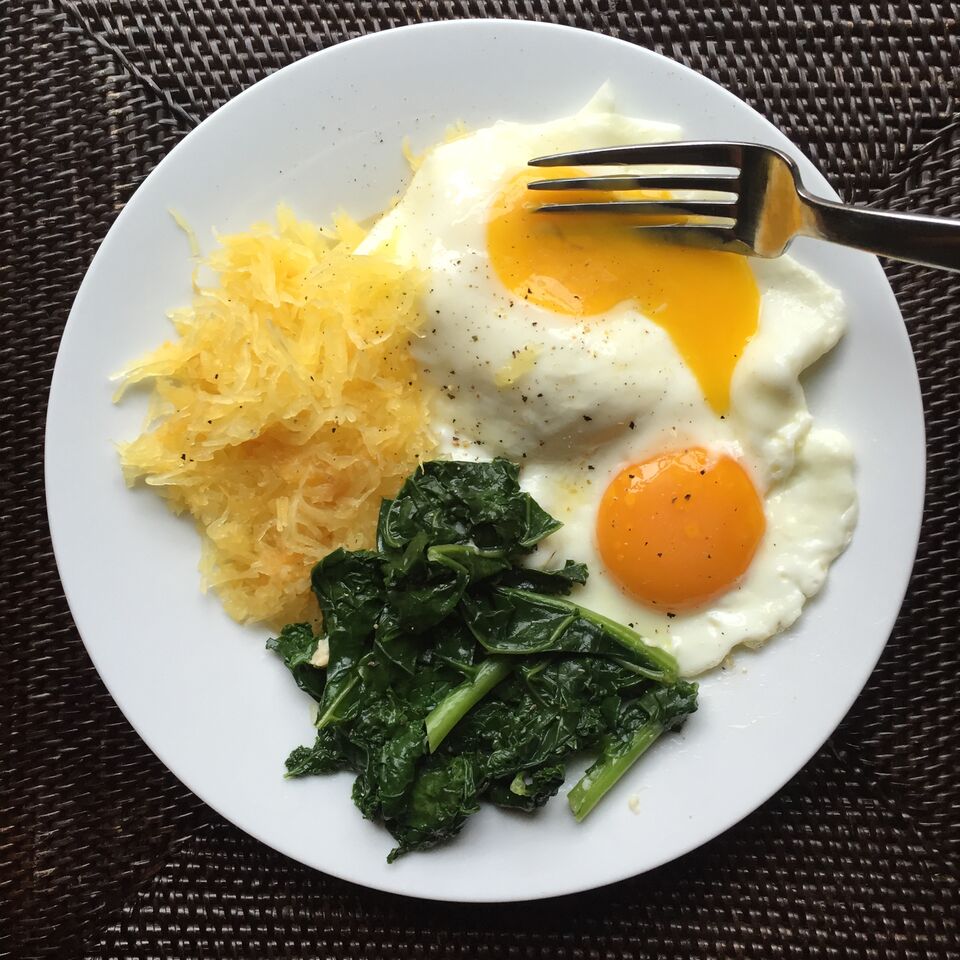 Breakfast Two Eggs with Sautéed Spinach and Spaghetti Squash. You can omit the spaghetti squash if it’s too much to deal with in the morning or just replace with grape tomatoes.
. 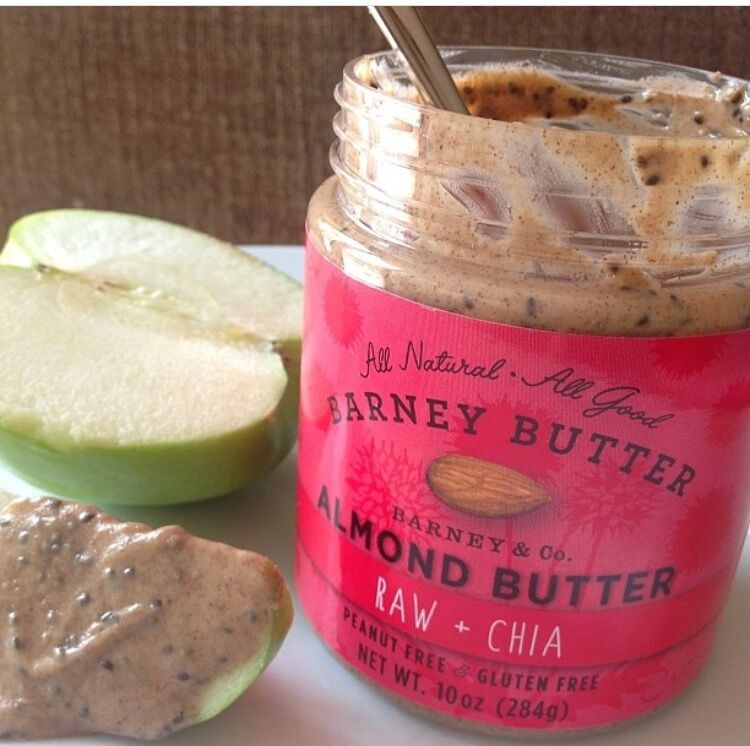 Snack: Apple or Celery Sticks with Almond Butter and Chia Seeds. (Barney Butter makes the combo you’re looking at above, but you can also just combine chia seeds with your favorite almond butter.)
. 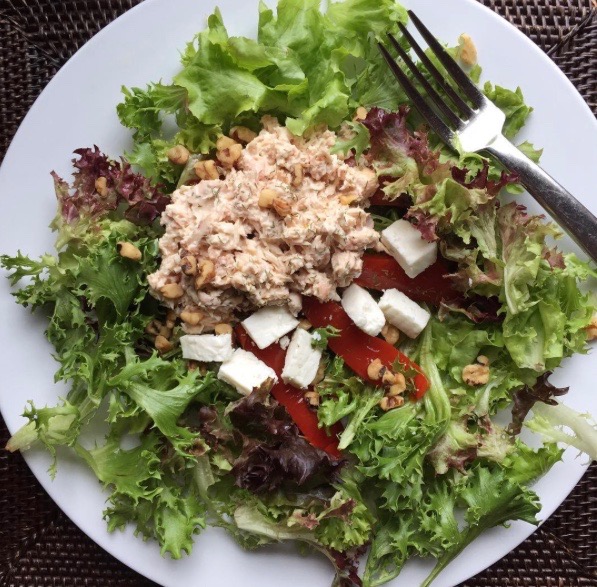 Lunch: Salad. Greens with Roasted Red Peppers, Goats-Milk feta, Walnuts and Tuna that has been tossed with avocado oil. (Oil and vinegar for dressing.) 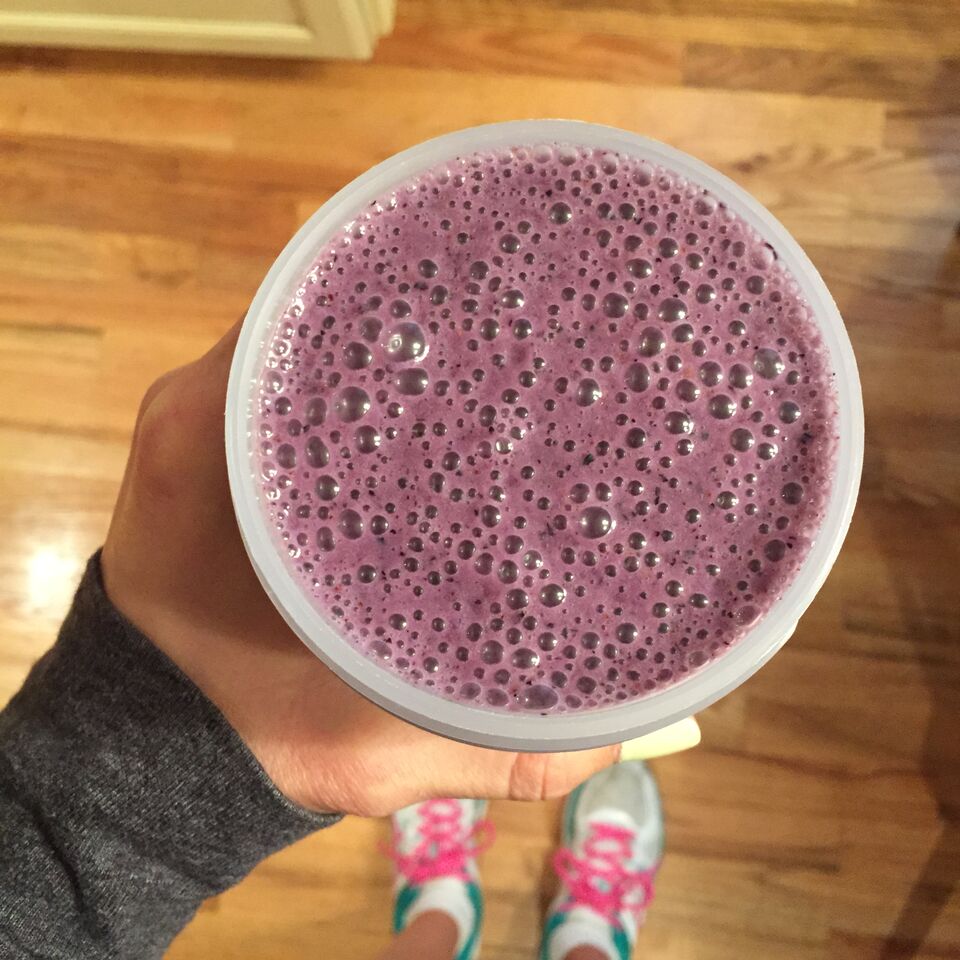 Afternoon Snack: Detox Smoothie In a blender, process the following: 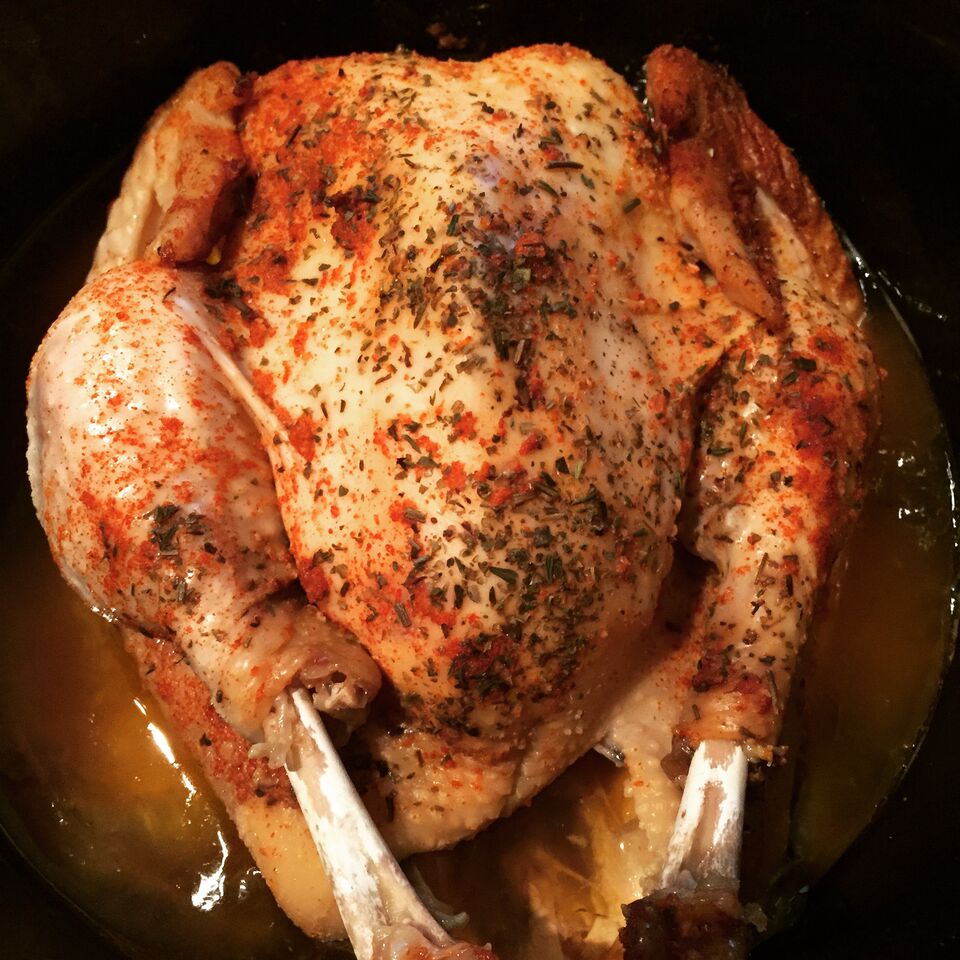 Dinner: Slow Cooker Chicken & Gingered Bok Choy. Season 3-to-4-pound chicken (or larger if you think it can fit in your slow cooker) generously with salt, garlic powder, paprika, and dried parsley. Place two onions (peeled and sliced) on the bottom of the slow cooker. Place chicken on top and add one cup of all-natural (chicken, beef, or vegetable) broth. Cook on low for 6-8 hours or until chicken is cooked through. (If you want a crispier skin, carefully remove chicken onto a baking sheet and broil for three minutes.) 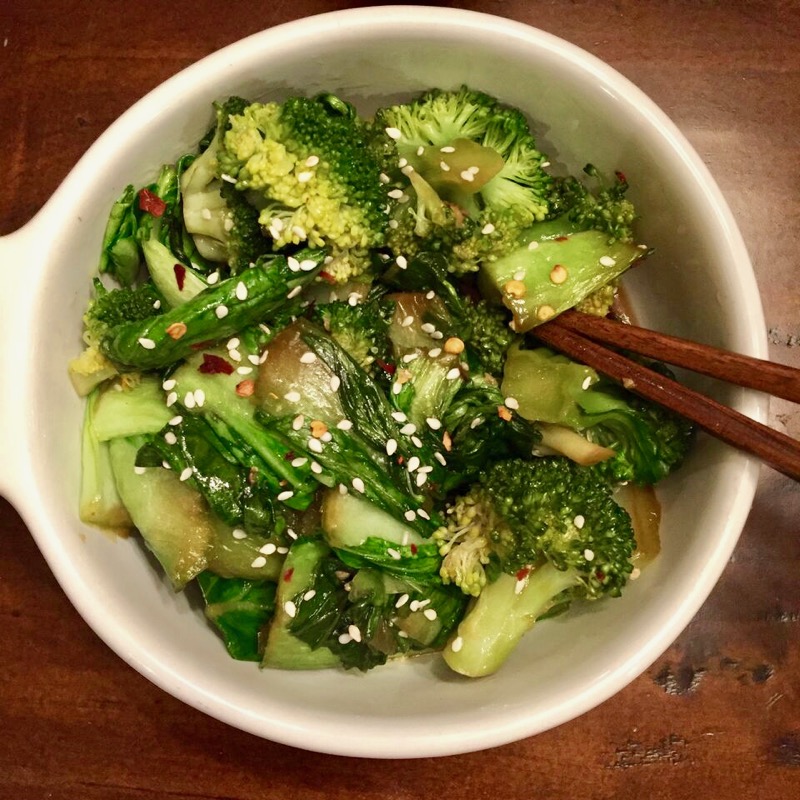 Cut bok choy into one inch chunks (use leaves and stalk just not the very bottom of the white part). Heat oil in a skillet. Add bok choy, coconut aminos, garlic and ginger. Cover and cook on low heat for 2-4 minutes until the greens are wilted. Uncover the pan and cook about a minute more. Turn off heat and top with sesame oil, sesame seeds, and red pepper flakes. Toss to combine. (Note: You can also toss in any leftover steamed vegetables you have on hand  — chopped broccoli or string beans — and heat with the bok choy in the sauce.)

I am pleased to use this post as an excuse to announce my partnership with Thrive Market — think Costco meets Whole Foods — which Julie sources from regularly. Click on the above offer (or here) to become a member, and (bonus!) get a free jar of coconut oil as your welcome gift.

I have been interested in joining Thrive for a while. Thanks for the offer! I cannot seem to make the free coconut oil happen though. Is there a promotion code?

Click on the offer now — it should be all fixed, Emma. Sorry for the trouble!

Yum that smoothie looks delicious! I will have to try it tomorrow.

I LOVE this. What a great looking day of eating.

love the realism in this post and some good looking nutritious stuff, stuff that looks like you won’t have to choke it down, as your wrote, thank you for this!

Yum yum, that chicken looks heavenly!! I would love to try it.