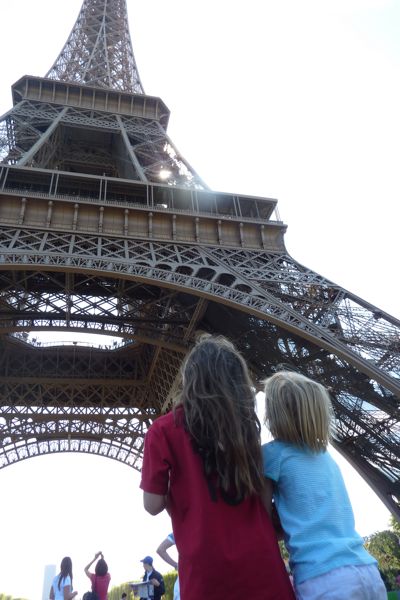 When I first got my MacBook Pro a few years ago, Abby and I became obsessed with the Photo Booth application — the one that takes your picture and superimposes fake backgrounds to make it seem like you are riding a roller coaster or flying through outer space or floating inside a fish tank. There’s also a background for Paris and when we snapped that photo we got a big laugh out of the resulting image. Look at us! In Paris! Ha ha ha ha! There’s the Eiffel Tower! The day I took Abby and her sister on a trip like that was a day far off in the future, like all those other days in the far off future, such as the day they would be able to keep track of their own shin guards or the day they could drive themselves to ballet or the day we fly through outer space.

But then — voila! — a friend offers a free apartment in Paris (free) any time in the summer (free) and before I know it, we’ve got ourselves another milestone crossed (which is, by the way, free). All of which is to say that the photo above was actually taken at the base of the real Eiffel Tower in the real Paris, where we’ve been wandering and eating and ferris-wheeling and eating and carousel-ing and eating and eating and eating for the past six days. And though I think it took the girls a few days to realize that Paris was something other than a tangle of really old streets you have to hike through in order to get to the crepes and the pan au chocolat and the palmiers and financiers and beignets and macarons, I think they are starting to register how far away from their little world back home they really are. And how strange and wonderful a feeling like that can be. 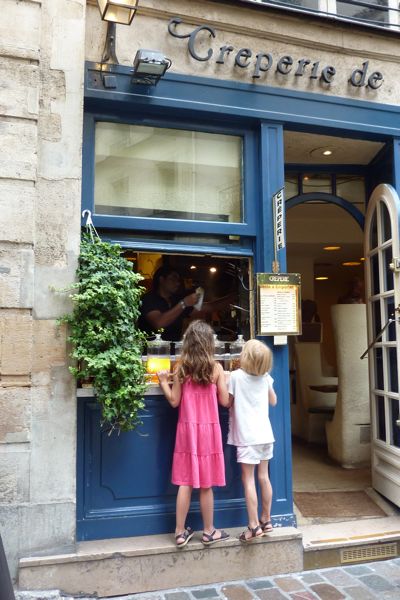 This post originally was going to be my Bon Vacances email, the one where I say enjoy your vacation I’m going on my annual digital diet, but we’ve been having so much fun in our French kitchen that I think next week we’re going to do our best to post some of the meals we’ve cooked. Mixed in will hopefully be some guest posts that I’m really excited about. In the meantime, some highlights from the week…

(PS: Please forgive my seventh-grade level French and the omission of accents — which I can’t figure out to save my life.) 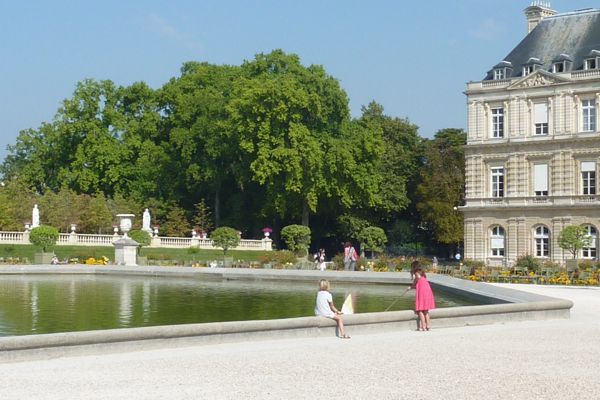 Everyday starts off with breakfast at Luxembourg gardens, which is in the running to be my favorite place in Paris/on Earth. The girls usually wolf down their pan au chocolat or croissants, then we let them rent a model boat to push around in the fountain for a half hour, while we finish our cafe au laits. 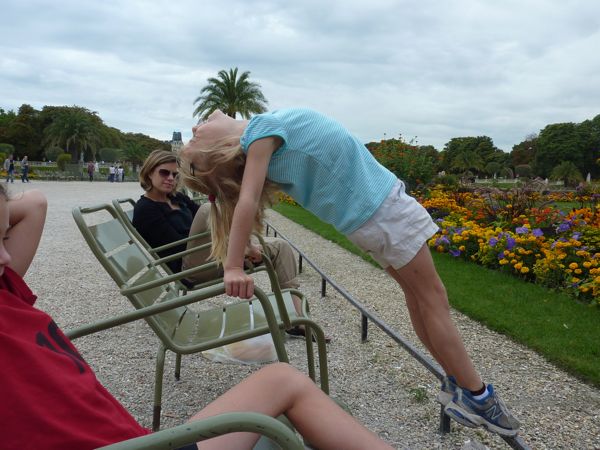 But when we don’t bother with the boats, they still manage to have fun.

You think we could be Phoebe’s parents and not seek out Tin Tin toy shops? We found the coolest one near the Louvre called Noxa (8-13 Galerie de Nemours). Inside were about a million teeny tiny hand-painted figurines. Not just Tin Tin and Snowy and Captain Haddock — though there was plenty to choose from on that front — but military figurines and characters from Asterix, thousands of dolls making up elaborate French pre-Revolutionary royal scenes. In other words, heaven for kids. Phoebe picked out a Tin Tin themed datebook and Abby introduced this figurine to her fleet of ex-pat dolls that made the transatlantic flight from New York. 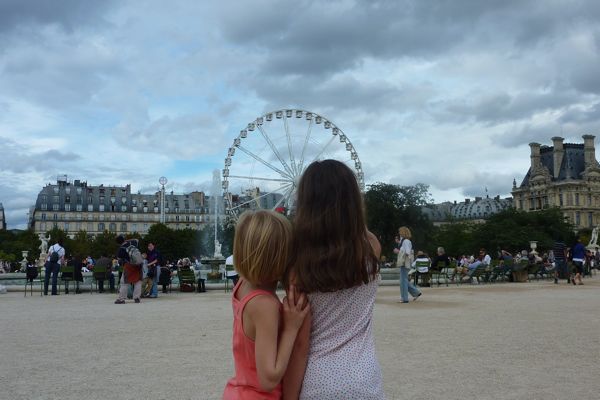 Highlight of the trip: A dramatic ride on the ferris wheel at Tuileries. A little too dramatic. I looked at my feet the entire time while the girls laughed their heads off.

As for the crepe count: So far they’ve tried nutella with bananas, jambon et fromage, lemon and sugar, and today, at this creperie on Rue St Andre des Arts (pictured up top) they opted for salt and caramel. I cannot believe I just wrote that sentence.

Looks fantastic!! Have a great vacation!

I’m having a hard time thinking of a more magical phrase than “free apartment in Paris” .

How wonderful, but best of all the Tintin shop. My son would be so jealous.

HOW FUN!! Did you go to Laduree for macarons? Can’t wait to read more about it!

Oh! Gave you a shout-out today for being awesome 🙂

This looks wonderful.
My son just loved the TinTin books. I went to the link to an old post. Thanks for the recommendations.

I’m with you on Luxembourg Gardens being heaven on earth. I spent HOURS there reading and people watching by the men playing chess during my last trip to Paris. Now I’m nostalgic!

I love the Eiffel tower picture! It makes me want to see the expressions on your kids’ faces.

I just got back from my honeymoon in Paris and I could go back again right now. I too went on my first ride on the ferris wheel at the Tuilleries this time, except ours was late at night and we saw the full moon rise over the Louvre. Amazing.

I can’t resist giving you a few food recommendations even though I’m sure you have your own list.

L’As du Falafel (in the Marais) – famous falafel
Higuma – delish Japanese, especially the gyoza. It’s super popular. Probably one of the cheapest meals you could get in Paris.
Le Nemrod – a lovely cafe / brasserie with a terrace that makes you want to stay forever.
Berthillon Ice Cream – all over the Ile St Louis. You probably know it.

If you’re there on a Sunday, the organic market on the Boulevard Raspail is a perfect way to start the day. You’ll feel like a posh Parisian.

Just got back yesterday from a 2 week trip to London and Paris. Our kids first trip ever overseas. It was great. We stayed at the Westin across from the Tuilerie gardens. While you are there you must take your girls to Laduree. Have a sampling of the macaroons, not the ones we eat here, but the most delicious things I have ever had!! My oldest, 10, told me it was her favorite place on the planet!

Ah Paris. We took our then four year old son there and he still talks about it. Definitely one of the best trips I’ve ever taken… ever. Seeing France through kids eyes was so worth it. We didn’t get to hit some of the must see destinations, but we loved going to the Paleontology museum and the Luco entertained us all so much, we pretty much stayed in that park the entire time. Loved the antique pedal cars and the giant cones of barbapapa (cotton candy).

Although I’ve been a fan of DALS for a little over a year and have made many a posted recipe, or noted cool future projects to do with my daughter when she’s old enough, I never felt a need to comment until I saw the photo of the Eiffel Tower – because we are heading to Paris in a week, to stay *for free* with friends! It was just too much of a coincidence not to acknowledge and use it as an opportunity to thank you for sharing all that you do… so thank you!

Bonnes vacances in Paris ! Enjoy the pains au chocolat, crêpes, french baguette… and forget the accents – they are useless 😉

Wondering if you’ve taken your girls to Angelina’s on rue de Rivoli for hot chocolate… simply to die for! What I recall most is the incredible aroma and thinking that I could inhale it forever. Ahhhh, so envious of your trip– enjoy!

I’m so jealous! Looks like an amazing trip. Don’t forget to hit up Berthillon for ice cream, it’s a must.

Fun, fun,fun. Trip of lifetime. Vicarious thrill. Wish I was there with you.

I remember our first trip to Paris with the boys (6 and 8 at the time): a quest for the best pommes frites, collecting Tintin comics and Papo medieval figurines, working our way through the menu at Berthillon, climbing to the top of N.D. to see the gargoyles at eye level, and so on. But the part they remember most fondly was the swimming pool in the hotel where we stayed on our side trip to Reims. Sigh.

I love these pictures. Just adorable!