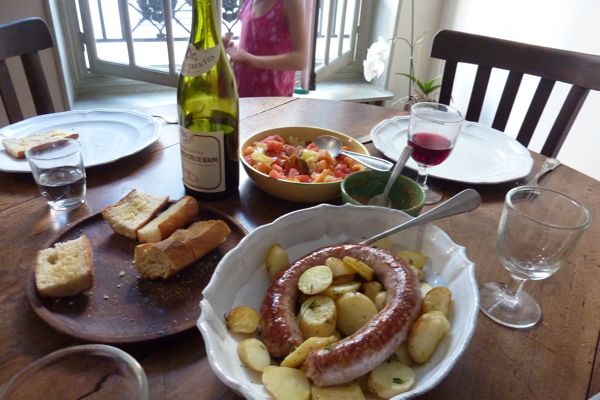 I remember, as a kid, thinking that food tasted better on vacation. I don’t mean this in the figurative sense, either. I mean that when my brother and I would come back to the house after four hours on the beach in South Carolina — my tawny brother coated in Coppertone Deep Tanning oil, with his Terminator glasses perched on his head, and me, with my zinc-ed nose and plaid Jams — we would have lunch on the screened porch, under a whirring ceiling fan, and marvel, as much as boys marvel, at the beauty of it all. This Boar’s Head turkey and Swiss: it was different, right? The Pepperidge Farm sandwich bread, toasted, the Utz potato chips: just a little fresher, a little more crisp. A tall glass, filled with tons of ice and a fizzy Coke: why didn’t soda taste this good at home? Not that we would have ever put it like this, but it was like our senses were heightened when we were away from home, and every Cheet-o, every Pecan Sandie, every drop of French’s mustard, every bread-and-butter pickle was that much more tasty, that much more special. This was discussed as an actual phenomenon, nothing imagined about it: it was different on vacation. We knew this to be true.

Turns out, we were just hungry. Food is food, of course, and it only tasted better because we were kids and we imagined that potato chips could somehow sense when we were on vacation and, in response, decide to make themselves just a little more delicious.

Yet another example, for the record, of the way adulthood sometimes seems to exist to crush dreams.

This past week, though, we’re beginning to reconsider the cold logic of…reality. We spent eight unreal days in Paris, and we cooked in five of those nights* and while I’m aware of how this will sound, each of those meals was better than anything we had in a restaurant. Not that we did anything particularly special in the kitchen. It was the opposite. We had a minimum of ingredients to work with — every meal we made revolved around the power troika of olive oil, dijon mustard, and fresh thyme — and nothing we made took longer than 30 minutes to prepare, or required more than two pans. But every day, for us, started early and consisted of 7 or 8 hours of walking — occasionally, when shade was scare and the blood sugar was low, known as death-marching — overpaying for bottled water, exploring new neighborhoods, lunching in gardens so freakin’ scenic it hurts to think about it, arguing over which metro line would take us home, roasting in the-line-from-hell at the Eiffel Tower, and then stopping off at the Saint Germain market near the apartment for some fixings. By dinner time, we were pretty well wrung-out. The kind of wrung-out where you can’t sit down, or you’ll never get up again. The kids would chuck their shoes and plop down on the couch and watch a DVD while Jenny and I moved into the kitchen, opened a twelve dollar bottle of Burgundy (don’t get me started on the sad state of cocktails here) and used what we’d bought. Our second night was probably our most successful. We bought a pound of a pork sausage called “Toulouse” — don’t know exactly what was in it, but it was mild, slightly herbed, and real porky — a bag of baby golden potatoes, and some heirloom tomatoes, known in France as “anciens,” which I kind of love. That’s it. Thirty minutes later, dinner was ready, and we ate like a pack of happy jackals. A caveat: Unless you’re on vacation, we can’t guarantee how amazing this will be. All we know is, something about it just tasted different. Better. — Andy

*This is what happens when an under-iced Orangina costs 7 Euros at a cafe. 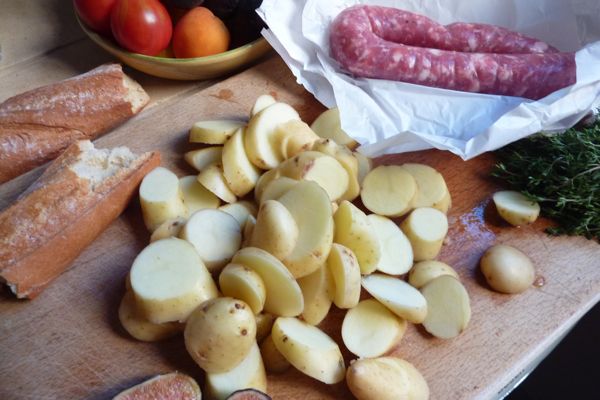 One pound pork sausage (or about what you see pictured above)
One pound golden potatoes, sliced into coins about 1/4″ thick
2 Tbsp Dijon Mustard
2 Tbsp olive oil
Lots of fresh thyme
Salt and pepper

Preheat oven to 400°F. (I think. These damned European ovens use Celsius measurements, so I guessed at the temperature. If you’re between 350° and 425°, though, you’ll be fine.) Boil potato coins for 3-4 minutes in salted water, strain, and set aside. In a large frying pan, brown the sausage over medium heat with one glug of olive oil, two or three minutes a side, and set aside. Pour potatoes into a medium baking dish, and toss with mustard, olive oil, thyme, and salt and pepper. Place sausage link on top. Put in oven and bake for 20-25 minutes. We drizzled the potatoes with a little more mustard that had been whisked with olive oil and a little balsamic. 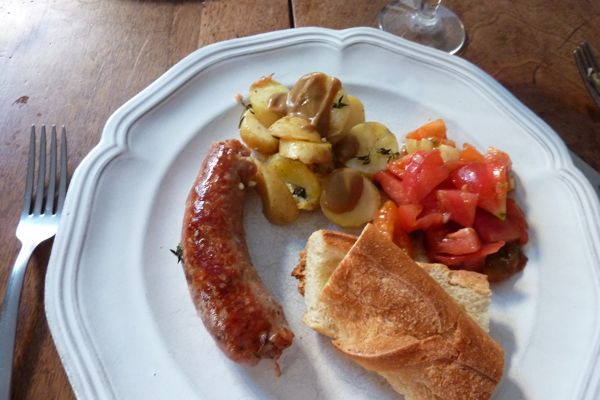 We served this with an acid-y tomato salad, nothing more than three tomatoes roughly chopped, half a red onion finely minced, and a dash of olive oil and balsamic vinegar, and some salt and pepper. Finally, you’ll need a loaf of bread — which, in Paris, happens to mean a still-warm baguette from Eric Kayser, which will crush your heart with its deliciousness. 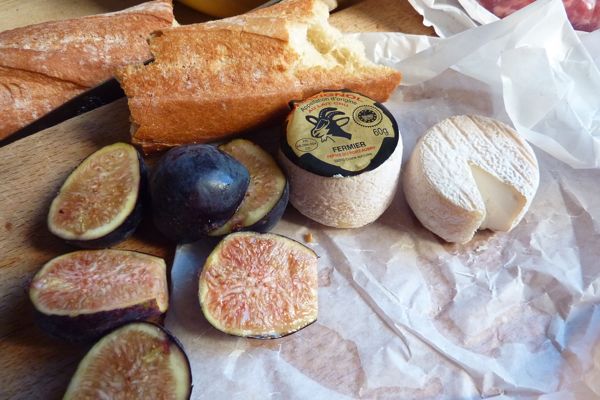 Doesn’t hurt to be snacking while you cook… 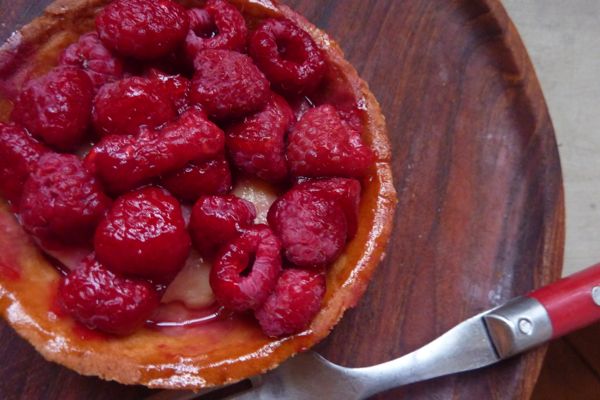 …or to finish off with a raspberry tartlet. And another glass of Burgundy.

I love that you said glug.
That meal looks wonderful, but, um, it’s that vat of cheese and bottle of wine that did it. Probably. Welcome home!

Eric Kayser bread! Their products are my holy grail as a bread baker, a fabulous meal of course firmly anchored by the bread! Agreed, I think it is more about the experiences and feelings surrounding food memory and less about the actual food.

Ditto re Eric Kayser bread. Heaven. And his financiers? I can’t imagine a better treat for a traveler. I carried them in my purse all over Paris and they didn’t stop being delicious!

Oh my goodness, I know just what you mean. Food that I usually shun at home turns into my favorite thing in the world on vacations and my favorites just taste like they were brought down from heaven! This is probably why things taste better on picnics as well. 🙂

Just got back from Paris as well..I assume you are talking about the lack of cocktail mixing there…tried to get a proper martini everywhere to no avail. Good thing their wine is cheap and good!

I’m totally with you about vacation food…especially at the beach. I remember being a kid, eating a lunch of bologna and mustard sandwiches, bugles (remember those?), and cokes on a big blanket by the ocean and thinking nothing had ever tasted so delicious.

I was just transported to Paris. Lovely.

I’m absolutely green with jealousy. Sounds like a lovely week away. And with kids, I almost always prefer dinner in!

Mmmmm…..sounds like just the kind of vacation my husband & I like to take….shopping for food mixed with a little sightseeing. It’s all about the meals….

This is exactly why we love camping. Each summer, we camp on the Sonoma coast. Our days are spent in Napa, Sonma, and all of the other food/farmers market-filled towns. By the end of the day we’re wiped out, & ready to ‘plop down’ at our campsite- and enjoy a ‘home-cooked’ (30 minute) meal. And it *always tasted better :).

what a magical vacation! We’re planning a trip to Paris this fall. Can you share the name of where you stayed (if you would recommend it, of course!) pretty please?

Your vacation sound magical! I always remember everything tasting better on vacation, the blackberries we handpicked across the railroad track by my grandparents house were somehow sweeter and juicier than anything we ever corralled back home.

Agreed…we just got back from a trip to Maine (not Paris, I know) but cooked nearly every night and certainly enjoyed the heck out of it.

Your peas and bacon were dinner last night, and this was dinner tonight. We had sausage in the freezer and potatoes that needed using. A great, simple meal. Too bad we weren’t in France, too.

My husband and I were in Paris last Oct, and I cooked the first evening, a meal very similar to yours, but I have to say, it does simply taste better in Paris. Going to remember to come back to your wonderful posts when I hopefully return to Paris after we have kids. Thank you.