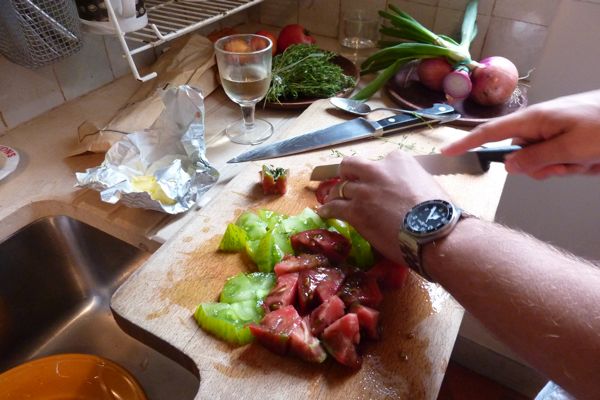 At the end of an eight-hour Paris wander session that began in Luxembourg Gardens, took us down rue Mouffetard, and ended up in the Marais, I collapsed on our sofa and began to scroll through the photos on my camera. There’s Abby feeding the remains of last night’s baguette to the ducks. There’s Phoebe gaping at the 6-month-old monkey at the zoo at Jardins des Plantes, there’s Andy drinking a Kronenbourg at a cafe one block from Place des Vosges, there’s….my dog in New York. It was like the screeching of a record player seeing that image — which was part of a video that doesn’t automatically download with still images. You know it’s a successful vacation when you are looking at photos of your house and you have to struggle to remember what it feels like to be standing in your own kitchen. I played the video and looked around at all the stuff that was littering the counter — bottles of vinegars and bowls and knives and spice jars and…what is all that stuff? What was I making? We had become so used to cooking in our French kitchen with the bare minimum that I thought Maybe I should just throw everything away when I get home. That night I picked up sole (aka, the most family-friendly fish there is) from the fish guy at the Marche Saint-Germain, Andy made a simple salad with peas, butter lettuce, and tomatoes, and we sliced up a baguette. Making sure we saved a little of the bread for next morning’s ducks. 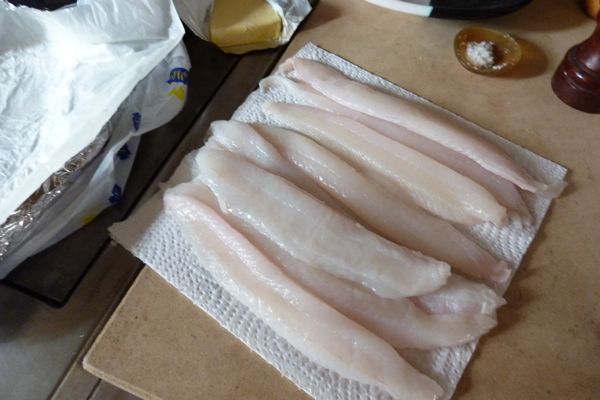 All I did to the sole — which was fresher than you can imagine — was fry it in a little butter and olive oil for not even two minutes a side. I poured about 1/3 glass of white wine into the pan, added another pat of butter, then turned up the heat to deglaze. I served the pan-sauce on the side so kids could drizzle as much or as little as they liked on top. 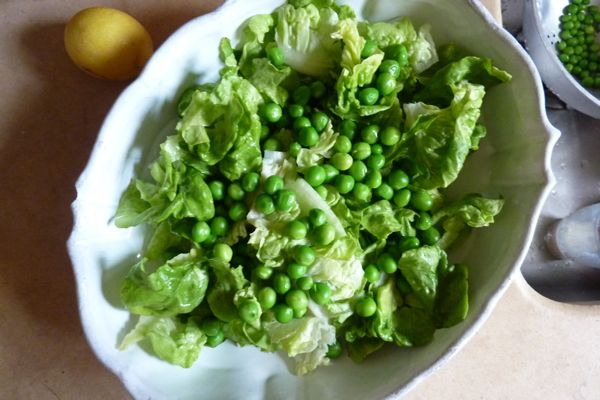 I’m a big fan of peas in salad these days. We added some fresh tomatoes and tossed with a vinaigrette made of balsamic, Dijon, olive oil, lemon, salt and pepper. 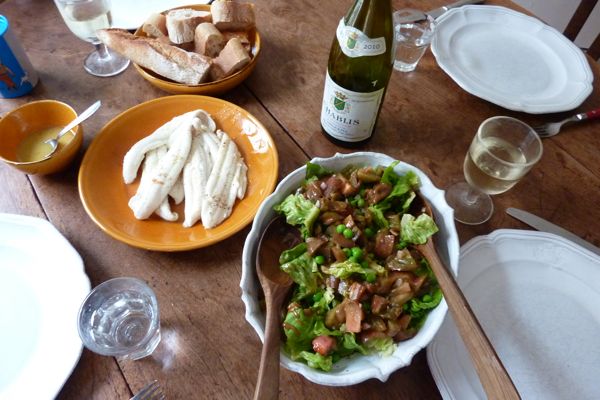 A nice light summer dinner was the perfect antidote to a day gorging on Parisian street treats. 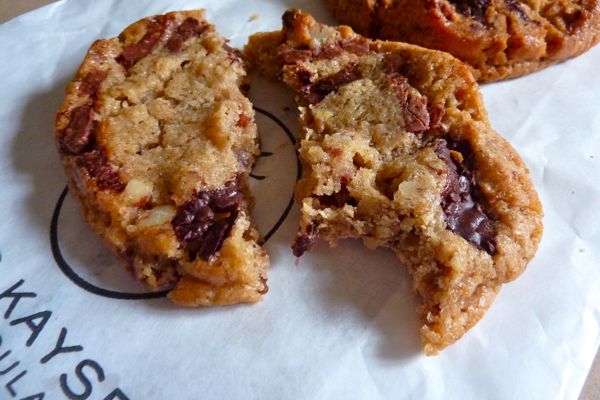 But that doesn’t mean we don’t have dessert. Two chocolate chip cookies picked up at Eric Kayser on earlier that day did the job.

It sounds like you had a vacation packed full of memories. Lucky.

Your pea salad says “it’s still summer!” I eyed Eric Kayser’s giant chocolate chip cookies every time I went in to his bakery, because they looked like “real” chocolate chip cookies, not wannabe French ones. They can make macarons and glitzy gateau and swoon-worthy puff pastry, but man, it isn’t easy to find a good cookie sometimes.

Why has it not occurred to me to make salads with peas before?? That looks so fresh and lovely!

I had the same moment this week with a dinner of corn, tomatoes, and pasta and I’m not even in Paris. Simple cooking is the only way to go in the summer.

That is my favorite Parisian wander session…except that I would usually make a pit stop with my Mouffetard bounty at the Arènes de Lutèce. Something to try next time.

Thank you for continuing to blog in Paris. I mean, it makes me totally jealous, but thank you anyway…

I am so envious of you! Oh, to be in Paris at all, let alone shopping for produce and groceries and cooking there! I’m just hoping we don’t get walloped by the giant hurricane heading our way this weekend in NYC- a crazy storm like that that would certainly put my cooking and blogging plans on hold! Enjoy your vacation, I’ll enjoy reading your blog about it!

My first comment on your blog ! But I have to comment since I love your blog and live in Paris (I’m French) (I also share your love for Trader’s Joe). If you need an address or any tourist information or anything, just write me an email ! I would be very glad to help !

That looks so easy and fresh! I’m going to try preparing fish that way, too, with a lovely simple sauce. This trip looks delightful! (I also love cooking while on vacation. Also, bacon and lettuce sandwiches eaten in the car on the way to the next city, hopefully a beach town, is the best.)

Peas in salad sound delicious. My favorite salad addition lately has been cold cooked (leftover) corn on the cob, sliced off in big pieces.

this looks so clean and healthy. And here I thought it was all steak and frites in paris.