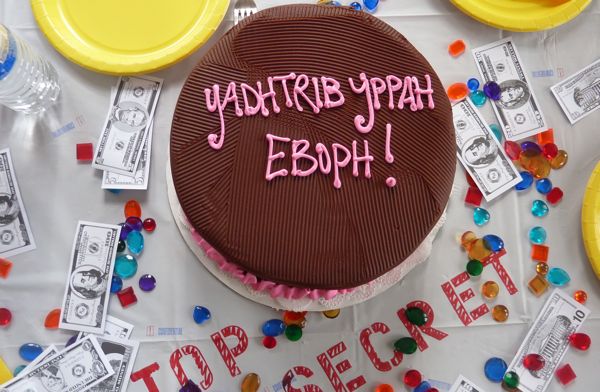 I didn’t make this cake for my nine-year-old’s Secret Agent Party. I had the local bakery write the birthday message in “code” (see if you can crack it!) but that’s where my confectionary contribution ended. I opted to buy the cake instead of bake one from scratch because by the time I was thinking about this last piece of the party puzzle, Reasonable Mom (Secret Code Name: Make-it-Easy-on-Yourself Mom) was losing to Unreasonable Mom (Secret Code Name: Who-Exactly-Are-You-Trying-To-Impress Mom). In fact, for this particular party  — with its three-floor, ten-clue scavenger hunt, hand-stenciled tablecloth, and late-night phone consultations with my friend Marcie, who threw her own spy party a few years ago — Unreasonable Mom was crushing Reasonable Mom. For this party, Unreasonable Mom was leaving it all on the field.

It was Unreasonable Mom who, two weeks earlier, forced me spend an hour designing the invitation for the party on my computer, even though the 9-year-old honoree herself was downstairs playing Angry Birds on the iPad. (A major violation in our house! Reasonable Mom always makes sure the birthday girls are as involved in the process whenever possible. Reasonable Mom does everything in her power to protect me from being on the other end of the silent accusation: Who’s this party for anyway? The mom or the kid? )

Reasonable Mom is the one who makes sure the girls choose the theme; the one who lets them pick the table setting (hence the blue tablecloth and pink plates Abby picked for her Game Party in spite of Unreasonable Mom’s aggressive nudging towards the yellow plates, which worked so much better with the dining room rug!) And it is always Reasonable Mom who insists the girls draw and write their own invitations, to put their own stamp on the occasion. Until this time, at least. Cause there I was photoshopping Phoebe’s head onto Inspector Clouseau’s body, flagrantly betraying my better self and pretty much nothing could stop me. Not even Andy (Secret Code Name: Reasonable Dad) peeking into the office to check out what I was doing before saying without exactly saying Who’s this party for anyway? You or your kid? 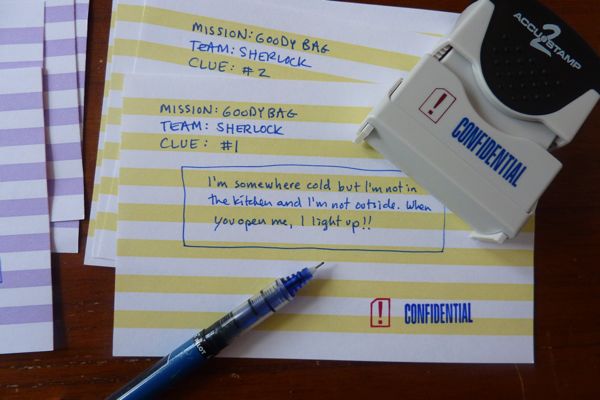 But I have to say, once the guests arrived, all the warring within vanished cause the party rocked. We had Andy’s playlist, which included “Secret Agent Man” and the themes from Mission Impossible, Pink Panther, and James Bond? Plus a dozen little detectives, calling each other by their assigned code names (“Vice Grip,” “Beetle Brow,” “Rawhide,” “Pigtail”) and sniffing around the house trying to solve the mystery of the missing goody bags. Even Reasonable Mom — with her rallying cry “the kids have fun no matter what you do” — had to admit: it was pretty cool. Oh! And the birthday girl thought so too.

12:00 Make I.D. Badges. As soon as the girls walked in the door, they were handed a secret agent packet with their code name inside. They wrote this name on I.D. badges (procured at Staples) and decorated with stickers and their own fingerprints.
12:25 Mystery of the Missing Goody Bags. The running narrative of the party was that Iris, our dog, had run off with all the contents of the goody bags (one box of candy, one box of fake jewels and cash, one box of glow sticks). But the good news was that Iris left clues for us all over the house. In other words, this was a giant scavenger hunt.
12:45 Who Am I? We wrote names of famous people (Taylor Swift, Lady Gaga, Barack Obama) on index cards and each kid got a chance to answer 21 yes-no questions until the group guessed who it was.
1:00  Lunch and Cake Pigs and blankets and sweet potato fries, plus the code-encrypted cake shown above.
1:15 Pass the Parcel We ordered spy kits from Oriental Trading and wrapped up enough fake mustaches and spy glasses so that everyone would be able to unwrap a gift when they peeled off a layer of paper.
1:30  Frog Detective. This is basically Indian Chief: Everyone sits in a circle. One girl leaves the room, a parent decides who is the leader. The leader starts a pattern (clapping hands, tapping shoulders, etc.) and everyone follows when she changes. The Frog Detective comes back into the room and has to figure out who is changing the pattern.
1:45 Present Opening and Goodbyes.

We made this sign a half hour before the party began and posted it on the front door and over the fireplace. 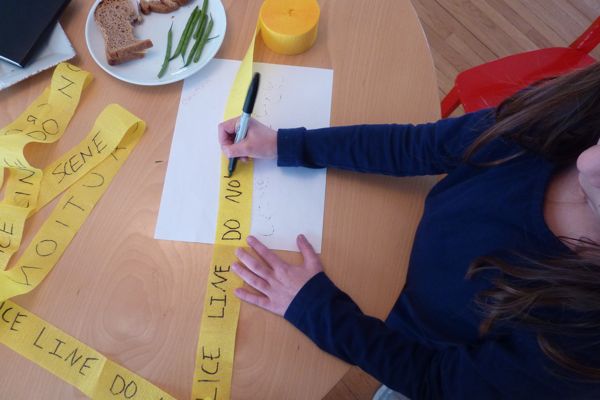 Phoebe wrote “Police Line Do Not Cross” on the yellow streamers and I draped them all around the windows. 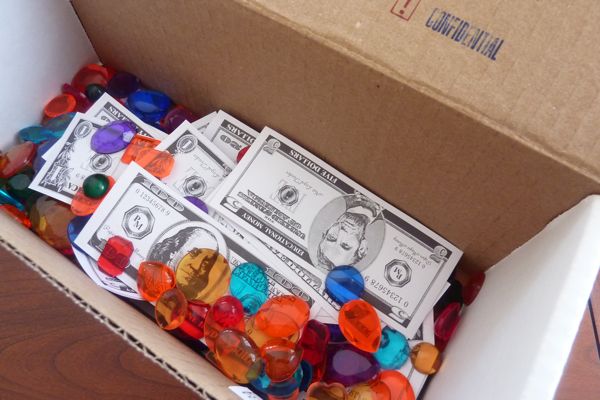 Scavenger hunt clues left by Iris (aka “The Striped Bandit”) led to stashes of loot like cash, fake jewels…. 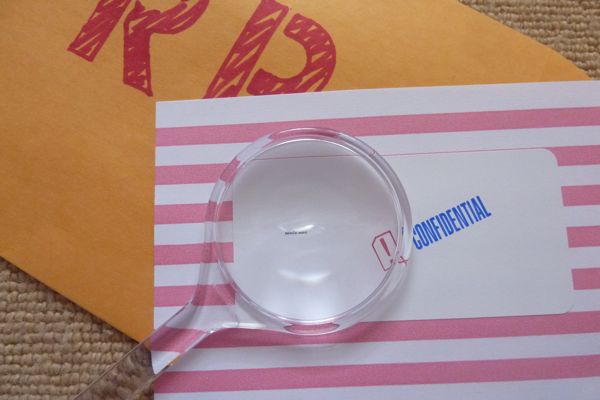 When kids walked in, they were handed a secret agent packet, which included their code name written in teeny-weeny font size 3, plus a magnifying glass to help them read it. This agent was assigned “Needle Nose.” 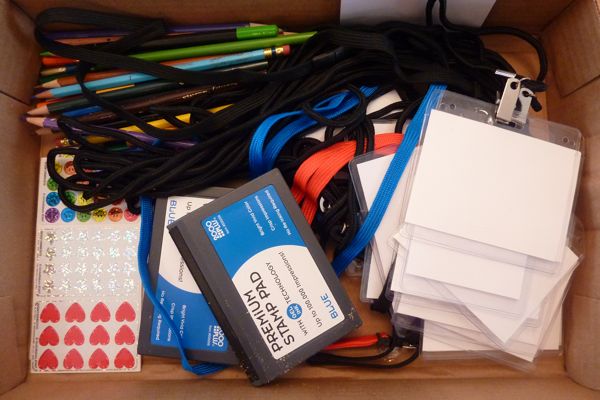 We did 90% of the party shopping at Staples: I.D. badges, stickers, ink pads, “confidential” stamp, index cards. They had everything. 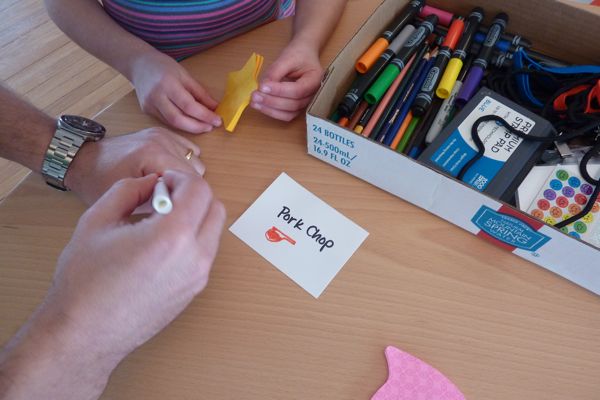 The party planners got code names, too. I was Bulls Eye and Andy was, of course, Pork Chop.

This is SOOOO COOL! My daughter is only 6 months, but I’m already filing this idea away for future parties. Now if my memory will just hold out that long….

Amazing! Fantastic! So cool and super special! What a lucky birthday girl. I think maybe I hate you. Way to raise the bar. I’m going to go sneak some of my kids Valentine’s Day chocolate now. Please tell Unreasonable Mom to go away. She’s giving me a panic attack. (But seriously, nice job!)

I went to a party last weekend where I thought the same thing: “Who’s this party for anyway? You or your kid?”

I love the work you put into the party – everything is so well thought out! I especially appreciate the parts where you took some shortcuts – like buying a cake (to a kid, this is a far superior product than a homemade cake).

I am definitely filing this away for a future party. Great idea! Love the food you served too!

So fun, Jenny. We did a spy party for my son’s 9th birthday and it was an absolute hit!

i want a code name! (or is that why my log in is for?) i love this, especially the do not cross streamers.

I think your alias should be “Supermom” – Wow!

Why do kid parties become so stressful? I nearly lost a week of sleep last year planning my 5 year old’s butterfly party. Seriously. It was fun but I had more than a few moments when I wondered, “What the hell am I doing?”

OMG – You are awesome! Can you bring your bag of tricks when you come visit? Mr. T will love you forever and ever 🙂

I love that your kids are older than mine — I can steal all your ideas!!

This is freaking hilarious. I am totally unreasonable mom. The black panther party is killing me. : )

hee, you are so hilarious. You know, I appreciate that even if you are putting the rest of us slacker mothers (who don’t even have parties for their kids’ birthdays…ergh) to shame, at least you can make fun of yourself a little while you describe your talents.

I love this idea. I’m definitely filing it away for when my oldest turns eight later this year. The soundtrack is a great idea!

I love it all! My oldest- soon to be 7 is having a Nancy Drew party on Friday and I had everything but a fun game. Thanks for the idea of the Detective game! I love kids parties and usually am Unreasonable Mom too. 🙂

I think this idea sounds fun, but truthfully kid birthday parties are now another stressful thing that involves planning and often oneupmanship or should I say oneupwomanship?

I absolutely love this bday party. I’m doing a very similar one this weekend for my ‘turning 8’ year old daughter.
While, yes, the unreasonable mom and others are struggling to figure out who this party is for. Lets not forget how much fun the kids had/will have, and the memories that you are making for your children.
I feel the older the kids the more the ‘unreasonable mom’ can be ‘unreasonable’ – because then its not just for the moms. It’s for the kids too, because they actually WILL remember the party.

Am I nuts, or did you accidentally forget an “E” in the cake’s jumble spelling of PHOEBE? I mean, shouldn’t it be EBOPHE or something similar? Is the “e” missing on purpose?

i was just about to say the same thing!

Love this! I’m planning a Spy Party for my 7-year-old secret agent and love the coded cake….now her palindrome name is laughing at me…HANNAH. Thanks for the idea!