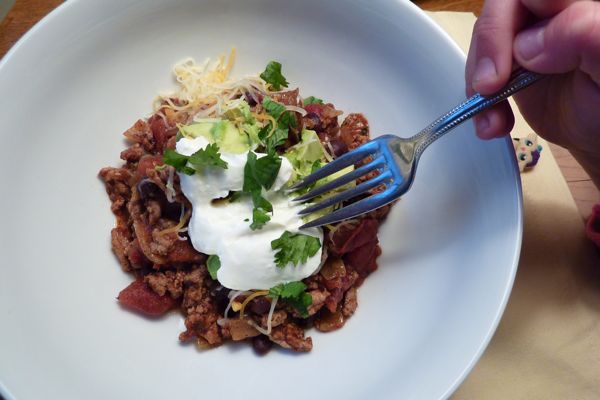 Well, almost. Both Andy and I directed her (and hovered over her) as she wielded a real knife and stirred chili powder into hot browning turkey meat, but she actually did everything — except open the can of tomatoes. Abby was at a sleepover so we told Phoebe she was allowed to pick her favorite dish and help us make it.  As I’ve mentioned before, I’m usually wary of the whole cooking-with-kids thing. It tends to make me anxious, and even though all those parenting magazines promise that my kids will be more likely to eat food that they are involved in making, that never seems to be the case in my house. But I guess context is everything — this time, it was a Saturday night and we started early enough so no one was starving or feeling the pressure of the clock. And I think Phoebe enjoyed a rare stretch of being the exclusive focus of her parents.

But what I’m really trying to say is this: If this turkey chili is easy enough for an eight-year-old to make, it’s easy enough for you. We’ve been perfecting this recipe over the course of a decade. It’s a good one.

Saute one large onion (chopped) and a clove of garlic (minced) in olive oil. Add a pound of ground turkey (preferably dark) and brown until it loses its pink color. Add 4 tablespoons of chili powder, get it sizzly so spices get cooking, add 1 large (28-ounce) can diced tomatoes, a dash of oregano, thyme, cayenne, 1 bay leaf, and 1/4 teaspoon of cinnamon (crucial). Turn down the heat, simmer for 15 minutes add black beans, cook another 5 or 10. Serve with toppings such as avocado chunks, shredded cheddar, sour cream, chopped cilantro. 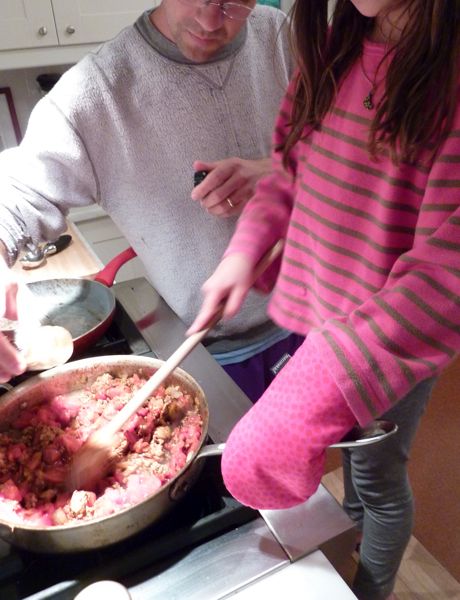 Excellent job! We have a 9-year-old daughter named Phoebe and she’s a big fan of our weekly soup pot. We trade off who’s turn it is to come up with the recipe and we all help make it.

Jenny, I’m going to try this recipe with my daughter. We made arugula pesto together the other day (strangely enough, she’s very picky but likes leafy greens) and she wolfed it down later. Maybe this will inspire her to finally try cooked tomatoes (or at least not gag when she sees them on the table).

Sounds good! Do you drain the turkey after browning?

This was so easy and absolutely delicious! Just the perfect amount of spice. Also love how easy the clean-up was! Thanks for sharing this wonderful recipe we’re making a weekly staple.

I tried the cinnamon. It. made. such. a. difference!

I can’t quite believe it – absolutely fantastic! Thanks for upping the ante on my usual fall favorite quick dinner!

It is absolutely amazing. Looks so tasty that i can hardly resist. My family is crazy about turkey chili.

oh my. just made this for the family yesterday and it nearly blew some heads off. i used 2 tbspns of chili powder, not 4. and it was so spicy, even the husband had a hard time (note: we are no strangers to thai, vietnamese, and other spicy cuisines.) are you certain you meant tbpsn and not teaspoons?

As a health coach I always have clients asking me hoew they can eat their pasta. I do recommend making ahearty chili with losts of veggies and put it over pasta instead of white rice.

Most delicious, easy chili I’ve ever made. The cinnamon makes it irresistable! Plop the fixings on top and – hello perfect fall dinner.

This is one of my family’s favorite recipes from your cookbook. Two of us love black beans, two don’t, so I have been making it without. It’s a huge hit! So so easy, and the spice combo really adds wonderful flavor.

I was curious if anyone’s adapted this to a slow cooker meal – any tips, besides brown turkey first and throw everything else in?

I have been in a meal rut for almost 2 years now. Just told my husband tonight I needed to get a little better with this dinner thing. Then I found you tonight. Really excited to get on a meal plan, plan, instead of OMG what am I going to make!

This chili is so good! I love that it doesn’t need to simmer all day. I’m making it tonight, but doubling the recipe so we can have leftovers. I don’t know if i was happy or sad that 3 of us devoured 90% of the pot last time….mmmmm!

I am having a small Halloween party and wish to double or even triple this recipe. Can you please tell me what ration to use of each ingredient so I do not over do the spices, etc., or should I just go ahead and double/triple everything? Please let me know soon. Thank you so much for a great recipe.

This recipe is absolutely delicious. The cinnamon is a stroke of brilliance. Thank you so much for all the time you spent perfecting this recipe.

I liked it a bit better with crushed tomatoes–I felt that the flavors melded together more that way. Otherwise I love the spice combo! Thanks!

Silly question, but do you put the bay leaf in whole and then just not serve it in the individual bowls? Or am I supposed to chop it up? Mince it?
Thanks!

This is soooo yummy! One of my favorite recipes!

so happy to find a chili recipe i like! i will definitely make this again.