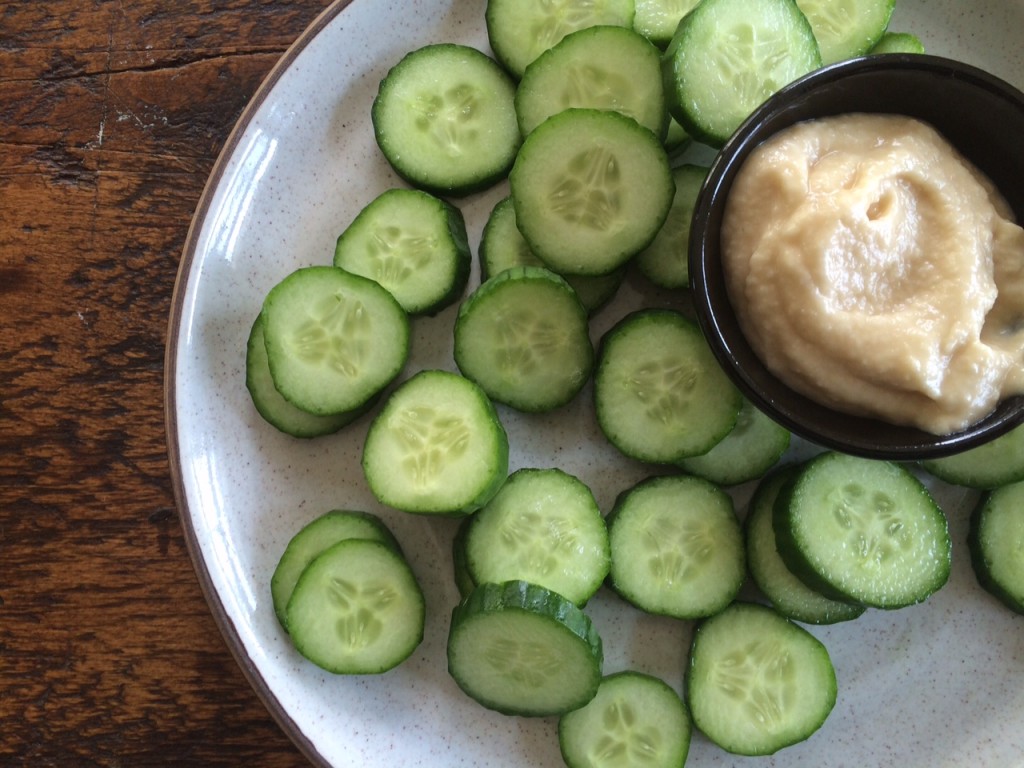 Let me apologize right off the bat for this post reading like an ad or sponsored content, or a 19th century Keatsian love letter, because there is no way I’m going to get through the next two hundred words without going seriously heavy on the superlatives.

OMG! I THINK I FOUND THE SNACK TO END ALL SNACKS.

It all started near the sushi counter in the prepared section of Whole Foods. (I fear for the day when someone annotates that sentence.) We were grabbing some lettuce wraps for lunch when Abby picked up a bottle of the stuff that would forever alter history. Or at least snack time.

“Do you think this is the dressing I love in Japanese restaurants?”

It was a bottle of Genji Original Vegan Ginger-Miso Dressing. The packaging was nothing fancy. The color was bland. The price was — well, at six bucks, it wasn’t a rip-off, but it wasn’t a bargain either. I was feeling generous, so we tossed it in the cart. (Plus, I’ll pay a premium for anything that has the potential to get a kid excited about salad.)

It was exactly the dressing she loved — that we all love — in the average $12-bento-box-lunch-special Japanese restaurant.

We became full-fledged Genji junkies. The label on the bottle calls it a “marinade” and “sauce,” but we quickly found the best way to serve it was as a dip alongside crispy, slightly-salted cucumber rounds, preferably at 4:00 when it would be so incredibly easy to go with the cookie instead. Or at 6:30 when you’re making dinner and really really really really want to bust out the bag of kettle chips. Or when your kids’ friends come over, look skeptical, then proceed to obliterate the entire vegetable plate like it’s a cake-batter lined mixing bowl. We don’t limit ourselves to cucumbers: Carrots, bell peppers, sugar snaps, snow peas…they all work as dippers. So do fingers. It doesn’t really matter because whatever you use is merely a vehicle to transport the tangy, gingery, vinegary, miso-y, oniony dip from the bowl to your mouth. If we could drink the stuff straight from the bottle, we would. I’m actually not positive that hasn’t already happened.

Related: How to Kick a Dessert or Snack Habit; Three Steps to Healthier Days; The Sneal: Not a Snack, Not a Meal

Can we figure out how to make it?!

It would be perfect if it didn’t have wheat in it but I’ll give it a go for those who can eat wheat – who can resist the snack to end all snacks? (not me!)

My daughter discovered this dressing at Whole Foods recently and now refers to it as ‘life sauce.’ As in, this sauce is MY LIFE! Delish.

@kathy – your daughter should meet my daughter. that is so Abby.

Yum! Does this have to be refrigerated before opening, or is it shelf-stable? Cannot wait to order some and try it!

The best kind of snack: addicting-ly delicious and healthy 🙂 We found some very small cucumbers from the farmer’s market – they look like they are destine to be pickles – and they are so sweet and tender! I bet they would be perfect with this dressing..thanks for sharing! – Charlie, http://www.lemonbutterlove.com

They don’t sell it in Texas! I think I need to move, Looks delicious.

Deb Perelman at Smitten Kitchen has a recipe for a miso dressing that is very similarly addictive and costs a lot less. We use it all the time. It’s the dressing she uses for this bowl (which is also a great family dinner, easily modifiable and deconstructable): http://smittenkitchen.com/blog/2013/10/miso-sweet-potato-and-broccoli-bowl/

Deb Perelman at Smitten Kitchen has a recipe for a miso dressing that is very similarly addictive and costs a lot less. We use it all the time and always make a double recipe or more. It’s the dressing she uses for this bowl (which is also a great family dinner, easily modifiable and deconstructable): http://smittenkitchen.com/blog/2013/10/miso-sweet-potato-and-broccoli-bowl/

Our Costco (California) sells a version of this dressing for half the price.

Looks delicious! Thanks for inspiration.

Ran out to get the stuff as soon as I read this. I know it’s supposed to help with the vegetable-eating, so I feel a little bad coming back here to say how amazing it is as a pretzel dip! At our store, it’s inside the sushi case

I’m nuts for this type of dressing @ restaurants. I’ve tried & failed to recreate it. Unfortunately, I can’t find any in my area. And that tracks with what the manufacturer states on their website. So basically, my fingers are crossed that it will show up on Amazon!

Thanks for this! I LOVE the ginger dressing at the Japanese steakhouse. We used to go there with my parents so much, when my two oldest sons were small, that they would ask for “hoo-bachi”. I’m so glad to know there is a ginger dressing we can have at home.