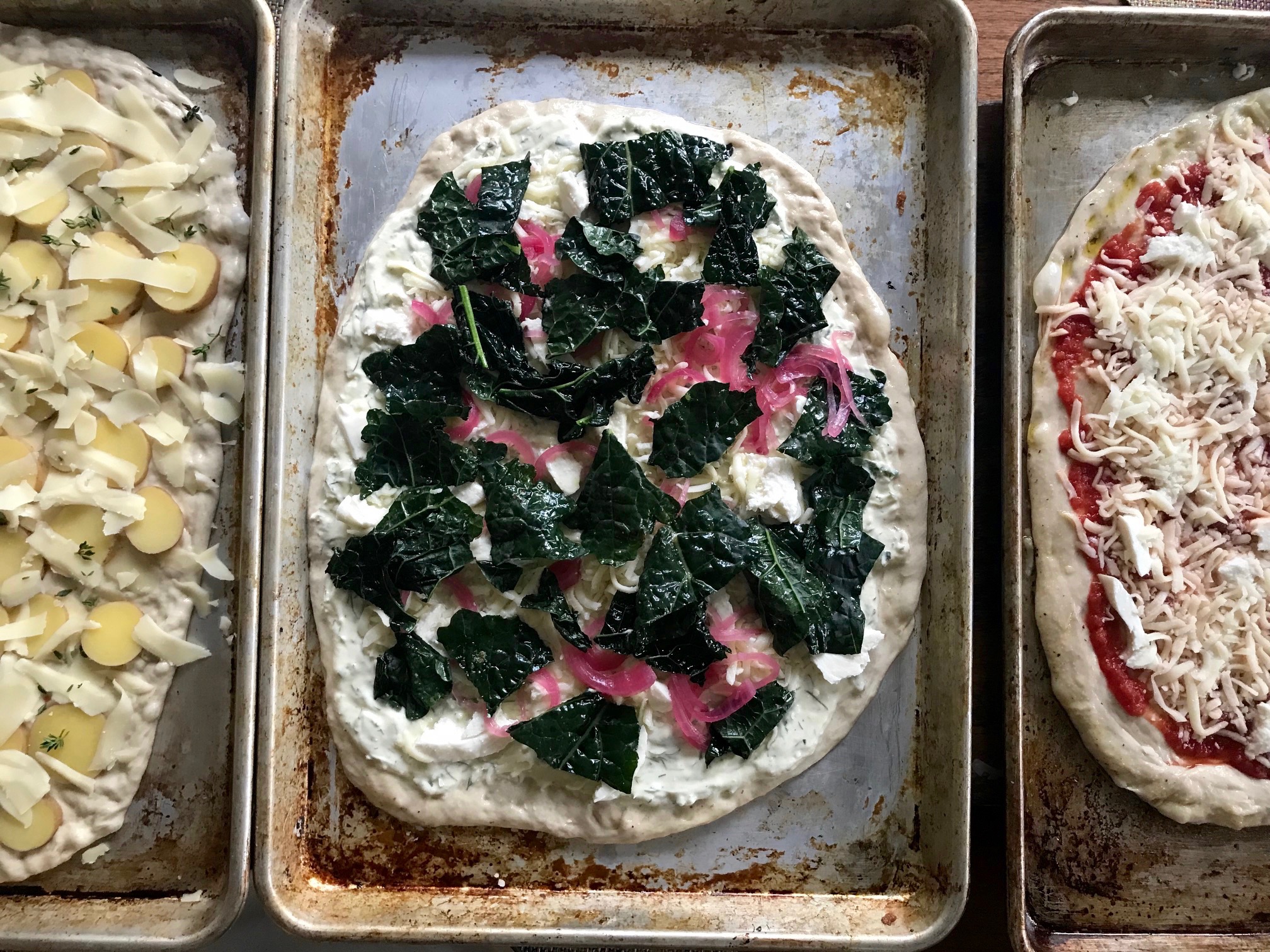 .
I was all excited to share my Super Easy Family Dinner Party Plan with you a few weeks ago after serving three of the most delicious pizzas for my college friend, Samidh, his wife, Nithya, and their two kids. I was envisioning calling it “Family Dinner Party in Three Easy Steps” because, really, it felt so effortless, the kind of meal where the reward is completely out of proportion to the work involved in making it happen. I believe the business people of the world call this a healthy R.O.I.

The morning after, I started typing up the instructions. Step one, step two, step three. Hmmmm. Step four, step five.…what the?…step six, seven. I pressed “save” and stopped writing, dejected. Why does something that seemed so easy sound so complicated when I type it all up? I hadn’t even made the pizza dough from scratch. A ten-step dinner party isn’t exactly the easiest sell to busy parents. Especially when all you have to show for it is pizza.

Part of the reason I decided on pizza was because three out of the four of my guests were vegetarian and I had just unpacked a pile of fall produce from the farmer’s market when Samidh’s text (“We’ll be there at 6:00”) came through. Also, Samidh’s two kids are considerably younger than my babies, which is to say one of them was reading The Wizard of Oz (Phoebe was only too happy to introduce her Marvel version to him) and the other invited nothing but awwww from her hosts when she stood up in a dining room chair, put her hands on her hips, and just hung out there for a while. In other words, when there’s a younger set involved, pizza always seems like a safe choice, something that everyone could eat together. No separate table, no separate menu, no separate serving.

And not that anyone would complain about a bunch of tomato and cheese pizzas, but I kind of felt like bringing it, and if you have the right resources, pizza is an excellent vehicle for doing just that. Resource number one, of course, was DALS fave Pizza Camp by Joe Beddia. I knew I wasn’t going to have time to make Beddia’s 24-hour deliciously fermenty dough, but I was looking for a pie that involved the spring cream I first made (and published here) last April and haven’t stopped thinking about since. It didn’t take long to land on one with kale and pickled onions — I had beautiful kale from the market — and I decided to supplement with a potato-cheddar-thyme pizza (inspired by New York’s Sullivan Street Bakery classic) and, because I’m not crazy, a classic margherita.

What really appealed to me about this menu was that I could prep the elements and assemble the pizzas ahead of time. All I needed to do when the guests arrived was shove the pies in the oven and set a timer. And it’s true, that part was easy and awesome. What I hadn’t realized until I started typing up the instructions was that some of the “elements” were pretty involved. I was cooking a little at a time all day long, I had done most of the shopping already, and it was one of those early fall Saturdays when being in the kitchen felt very right, so it didn’t feel like a lot.

But no matter which way I look at it, the Return on Investment was still pretty high, because dammmnnn that was a good dinner. So here’s your Family Pizza Party, in Ten Easy Steps.

1. Make Spring Cream
Follow spring cream instructions at the bottom of this recipe from Pizza Camp, again, the best pizza cookbook out there in my opinion.

2. Par-boil Potatoes
Slice 10-12 fresh fingerling potatoes (unpeeled is fine). Add to a pot of water and bring to a boil. Lower heat and simmer for 5 minutes, until potatoes are slightly tender, but not cooked all the way through. Drain and pat dry if using right away.

4. Make Marinara
In a small bowl, stir together one 15-ounce can crushed tomatoes, 2 tablespoons olive oil, and one clove garlic, pressed. Cover and chill for as much time as you have. (Preferably about two hours, but I’ve used crushed tomatoes straight out of the can for sauce — no garlic or oil — and it’s fine. The key is UNCOOKED crushed tomatoes for sauce.)

6. Prepare Three Pizza Doughs
Place three store-bought pizza doughs in the center of three lightly-oiled square cookie sheets. Using your fingers, stretch out each one to the sides of the pan. (Hopefully your dough will have been sitting out for at least a half hour so it will be warm and pliable.) The goal is to get the crusts as thin as possible.

8. Prep Pizza 2: Kale and Pickled Onions (this is a version of another pie in Pizza Camp)
Spread spring cream on dough. Add about a dozen pieces of torn fresh mozzarella, torn kale, and pickled onions, as shown.

9. Prep Pizza 3: Potato and Cheddar with Thyme
Brush dough with olive oil that’s been spiked with a little garlic powder. Top dough with potato slices. Sprinkle cheddar all over dough, as shown. Sprinkle with thyme leaves. (I’ve added caramelized onions to this pizza before, but not this time.) When it comes out of the oven, sprinkle with sea salt and a few turns of freshly ground pepper.

10. Bake Pizzas
Bake each pizza in a 475° oven for 10 to 15 minutes (start checking after 10) until cheese is bubbling and crust is golden and crispy. Remove from oven, let cool slightly. Unless you have a gigantic oven or two ovens, you will probably have to do this in shifts. None of them have to be piping hot when you serve. In fact, they are easier to slice when they’ve cooled a bit. Cut pizzas in rectangular pieces and serve on platters and cutting boards in the center of the table with a giant green salad (that’s step 11 but I couldn’t bear to go beyond 10) and shredded Parm for optional garnishing.

PS: It would be very easy to add pepperoni or sausage crumbles to the margherita pizza if you were planning to entertain meat-eaters. I’m not sure why I do this, but whenever we are cooking for a vegetarian, we usually make sure everything is vegetarian and not just one corner of the meal. Do you guys do this too?

PPS: We started with chips and homemade guacamole.

I am a fan of pizza on work/school nights, as I’ve discovered Fleischmann’s pizza yeast. It’s amazing! No rise time, no temp check on the water – just mix, lightly knead, and you’re ready to go. I make the dough in the morning, lay it over parchment paper and slide it onto the baking sheet (adding cornmeal under the crust is a really nice touch); it’s left covered in the fridge all day. At the same time, I slide into the (cold) oven a second baking sheet to rest, so when my husband comes home and heats the oven, the empty baking sheet that I left in the oven gets nice and hot. We top the pizza right before baking, and when it’s time to bake the pizza, I slide it off the original (cold) baking sheet onto the hot baking sheet; this always ensures a nice, well-baked crispy crust.

I bought Pizza Camp (on your recommendation) a while back and I love it. It’s totally changed my pizza making game (I particularly like the mushroom cream sauce in there but haven’t tried the spring cream sauce yet). I have not yet tried making the dough since there are some good store-bought choices nearby, but one day when I have a few days off from work and extra time on my hands, that is going to make an excellent project. The next “project” is going to have to be a stop on the way home from my mom’s house to visit his restaurant!

BTW, we have some vegetarian friends as well and I also find it easier and more hospitable to just make a vegetarian meal for all. Reminds us that vegetables are delicious too!

Also we do vegetarian main with (if any) meat side. Often things taco dinner, baked potato bar, or pasta/soup with a optional meaty topping.

How far ahead can you prep the pizza without getting a soggy middle? And did you leave your pizzas at room temperature before baking? Thanks!

You note that the marinara is made from a CAN of crushed tomatoes, but then write ‘The key is FRESH, UNCOOKED crushed tomatoes for sauce.’ The uncooked part is correct, but there is a big difference between canned and fresh tomatoes. I notice it that a few posts ago you were discussing broccoli and used ‘fresh’ to mean raw. I read your blog religiously, and really like it, but these are not minor nuances with less experienced cooks. Thank you.

We have a wood fired pizza oven and while I love the taste of Joe Beddia’s pizza dough, I have found Jim Lahey’s no knead pizza dough tastes very similar and is so much easier to work with. It is an 18 hour ferment on the counter, divide the dough into 4, shape and roll out and it is really forgiving to work with. I would highly recommend it! We have also been meaning to make a cream pizza and this may be the kick in the pants to do it–thank you for the Pizza Camp recommendation–it is an awesome book!

I really appreciate you actually writing ten steps! Sure, the title is less clickbait-y, but nothing’s worse than clicking to see “1. Make five sauces, 2. Make three doughs and while they’re rising, prep these six things, 3. Assemble everything, this on that pizza, this over on pizza number two, etc.” Just because there are more steps to it doesn’t mean it’s difficult or time consuming 🙂 Thank you!

This is true! The numbers just get in the way.

Totally random, but I have been looking for great sheet pans that will withstand all the roasting and baking I tend to do week in and week out.

Your sheet pans look like they have aged well and are continuing to treat you and your family to delicious pizza. Just curious if you can share which ones they are! Thanks so much.

My sister is vegetarian and for some reason, whenever we host family gatherings, I make nothing but vegetarian food. I guess I like having the chance to set my inner vegetarian free now and then. Plus it makes her feel like the center of the universe, which makes up for all the years I was SO MEAN TO HER.

One of my very favorite things about your writing is how honest it is – you keep it real! Sometimes even complex cooking feels easy when all the other stars are aligned, I totally get that. And certain guests are such fun that cooking for them always feels easy – I bet that was part of it for you with your college friend.

Having friends/families over this Sunday, and might follow this to a tee! BUT- what kind of green salad??? I follow your blog so closely, and use your Playbook at least once a week… thanks for all the help! Our absolutely fave so far is the Chicken Meatballs, but the Chicken Chili is a close second, followed by the Chicken with Peanut Sauce… (clearly chicken lovers over here). Thanks Jenny!!

Hi Jenny, thanks for the note, so nice! I can’t for the life of me remember what I did that night for salad, but since it’s hard to get good greens this time of year, maybe make my broccoli salad? http://www.dinneralovestory.com/start-with-chopped-broccoli/

Thank you, Jenny! I decided with arugula & fennel with lemon vinaigrette… ordered Pizza Camp and just finished making his arrabbiata sauce, oh my! 🙂 Thanks again for all these suggestions.