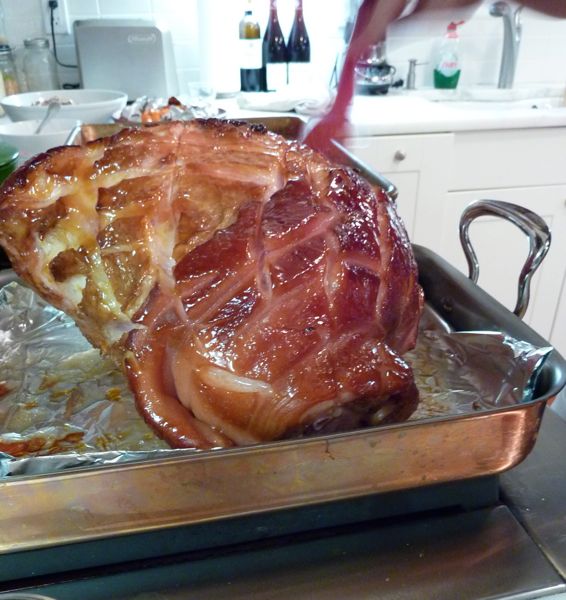 Do you have certain meals that you make rarely, on special occasions, and then, as soon as you’re done eating them, you say to yourself, Damn, that was good. Why don’t we eat this once a week? I do. Roast turkey with stuffing and gravy is one of those meals — so deeply satisfying, and come on, would it be any less satisfying on a Sunday night in January? Pasta with fresh clams and basil is one of those meals: why do we only make it in the summer, when we love it so much? Our New Year’s lobster is one of those meals and so, I’m not afraid to admit, is the twice-a-year kid birthday staple, Hebrew National pigs-in-blankets, with which I shall never ever dream of arguing. But the biggest heartbreaker for me is our beloved yet marginalized friend, the glazed ham. Why is it that we only eat glazed ham in mid-to-late December, at holiday-themed dinner parties? Who made up that rule? No disrespect to our entertaining stand-bys — short ribs, ragu, pork loin braised in milk — but is there really anything tastier or more dramatic looking or, honestly, easier to pull off than a crispy, sweet, salty, diamond-scored, slightly caramelized, fat-marbled, relatively inexpensive, even-better-the-next-day ham sliced up tableside and served with some grainy mustard and squishy Martin’s potato rolls? It’s enough to make me wonder why  — okay, beyond the health issues — we bother with anything else.

Because damn — did I say this already? — it tastes so good. And it’s easy, too. How easy? Here’s the entire ingredient list: 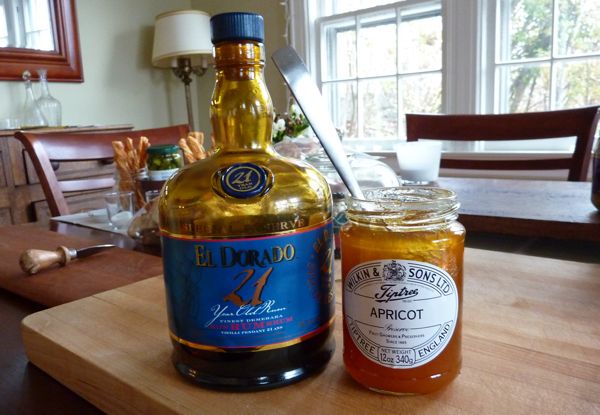 That’s it: apricot jam and dark rum. And unless you’re cooking for your local Hillel chapter, or your vegetarian book club — or Jonathan Safran Foer — a glazed ham tends to go over well. The best part, is you can live off it for a week. A ham and egg scramble for breakfast the morning after. Sandwiches the next day, on leftover rolls slathered in mayo: off the proverbial chain. School lunches, for the next few days, will blow a small mind. And then there is split pea soup, my favorite of all, one of life’s great pleasures. Damn, that’s good. Why don’t we eat this once a week? — Andy

A Glazed Ham (For All Seasons)

Get some apricot jam. Scoop out four tablespoons or so into a small pot. Pour in an equal amount of bourbon or good, dark rum. Set on medium heat and whisk until it gets all glazy and slightly bubbly. For the ham*, score the outer skin with a sharp knife in a diamond pattern. Bake at 325° for an hour in a roasting pan on the lower rack. After an hour, take it out and glaze it with a brush. Bake for another hour, basting/glazing with the drippings every 10-15 minutes. If it starts to burn, tent with foil.

Put on platter, let guests admire it. Slice thin. Serve with rolls and an assortment of mustards if you are having a cocktail party.

Looks good. I’m wondering how it freezes… I’m looking to refill the freezer over winter break and would love to have ham leftovers in the freezer.

Yum! I have been waiting for this recipe ever since you signalled it was coming. It’s a family tradition to have ham for Christmas so this is perfect. Thanks!

And don’t forget to invite your tiny friends to the hamboree…the cornichons.

Does this worked with a spiral cut smoked ham? Would I still score it?

Charla, the glaze would work, yeah, but you would not score it since it’s already sliced. Also, make sure it’s not pre-glazed, as some of the spiral hams are. Hope this helps.

Looks yummy – I kind of wonder what’s in those glaze packets when you buy a ham that comes with the glaze included. This sounds so easy.

Leftovers can be re-purposed into scallopped potatoes and ham

I totally agree! A glazed ham is a dramatic (and tasty) centrepiece for any table. I did one for a Christmas party on the weekend using fig jam, ginger jam, dijon mustard, a little brown sugar and macadamia nuts. It tasted fantastic! Pity I forgot about pea and ham soup and gave the bone to our dog. Better make another one soon….perhaps with rum and apricot jam?

You have Martin’s potato rolls, too? Aren’t they just the greatest things ever with ham?

As I run out to check the turkey and make sure it is completely submerged in it’s brine, I must admit I agree with you in wondering why we rarely make these foods we love. One reason may be availability. We were away for Thanksgiving and so no leftovers. Upon returning to Denver I went directly to the store to grab a fresh organic turkey only to be told that I would have to wait until a couple of weeks before Christmas before they restocked.

Your post inspired me to make a ham for Christmas dinner. My 10 month old is allergic to turkey/chicken and we were going to do prime rib but after seeing this I asked hubby if we could do ham instead! It’s so much better for leftovers and I love making and eating pea soup. This is my first Christmas making the dinner as we are away from family.

Ha! This is great. We bought a ham before we left for Paris for the week before Christmas with the idea that it would be an easy-thaw-and-cook for the main event. Now, we have a glaze! Easy just got easier. Rock on!

i think i may have shared this in a previous comment, but my grandma makes a ham every single christmas, and i seem to have formed a rule that this is the only time that i can have roasted ham. this recipe is going to break that rule. i will (after the holiday mayhem) make one on my own :).

Sounds delish! I am off out to buy one right now!

We followed this recipe for Christmas dinner. My husband declared it, “Slap yo mama good,” which is pretty much as good as it gets in our house! So so good, and so so happy to have leftovers.

We just made this and it was absolutely delicious! You really inspire us and we can’t wait for your cookbook.

i finally made the ham!! our very first one… DELICIOUS (and tonight, split pea soup) :).

I wonder if peach or any other jam would be a good replacement?