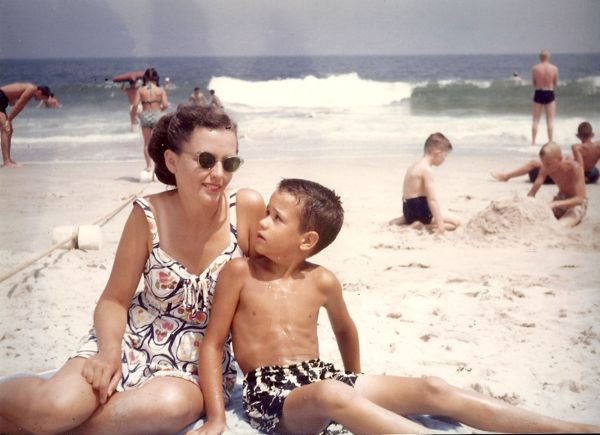 .
We are honored to present a very special guest poster today on DALS — my dad, Steve Ward. As I have noted here before, my dad did not have the deepest (and that’s putting it kindly) repertoire when it came to dinner, but man, could he do a good, no-bake dessert. Sundaes (topped with crushed, roasted peanuts), ice cream sodas (he was partial to ginger ale and vanilla), spoonfuls of Cool Whip straight from the tub (and delivered when my mom wasn’t looking) and, of course, milk shakes. The guy loved a milk shake. His love of them is still evident today, in the collection of vintage blenders and mixers he has on a shelf of honor in his office. We asked him to sing its virtues for Dinner: A Love Story, and he was kind enough to oblige. Here is proof that you’re never too old to start blogging.  — Andy
.

Hurricane Sandy’s devastation of Bay Head, New Jersey last fall opened a floodgate of packed-away memories for me, stretching back 57 years. It made an old man remember barefoot summers, crabbing, fishing with a bamboo pole for snapper blues, sailing a sneak box with my dad, tossing horseshoes with Gramps and – perhaps most notable of all– my very first paid job as the Milk Shake Man.

For one glorious summer in the early fifties, I led the life of an Archie Comics character, working for 38 cents an hour (plus tips) as a soda jerk behind the lunch counter of a general store on Bay Head’s main drag. It was in this beachside emporium that I learned the dark magic of the chocolate malted milk and the raucous, roaring machines that make them. Even with its meager wages, my job was a match made in heaven. I would have gladly have worked for free, because one stipulation of my employment was that I could consume unlimited malted milks, milk shakes, lime rickeys and other fountain concoctions free of charge.

The malted milk incentive quickly became an integral part of my summer strategy. As a rising high school freshman, I desperately wanted to try out for the football team, but my mother was of the opinion that 135 pound boys do not play football. When pressed, she grudgingly offered to reconsider if I made it to 150. So I embraced the challenge and fired up my battery of blenders. My rule of the thumb was that I would consume one malted milk for every ice cream drink I served a customer. The malted quickly became my signature dish and my blender talents were recognized up and down the beach, especially among the high school girls who stopped by to sit and chat at the counter.

Chocolate malteds were by far the most popular. My favorite, though, was vanilla, which was unusual. Strawberry was rarely ordered and no one ever thought of asking for whipped cream.

In the heyday of my Bay Head bacchanal, I can’t remember ever taking an order for skim milk; I’m not sure if reduced fat ice cream even existed, though I highly doubt it. One of the cardinal rules of healthy eating back then was that every child should consume a quart of whole milk every day – and, hey, that malt was good for you too.

Did I gain weight?  Indeed I did (and I made the football team, too) but I’m not sure my coronary arteries have ever recovered. The Malted Milk Man – along with his wife of 50 years — has cursed the weight and treasured the memories for almost six decades since.  The memories, of course, weigh nothing and they are sweeter than a Zagnut Bar.

An afternoon at the beach, slathered in oil specifically designed to make you burn… body surfing on a leaky air mattress … searching for beach glass… flirting with the girl in the rental next door. Then — baked, burned and exhausted — top it all off with a stroll to the soda fountain for a rich, creamy, icy-cold malted milk created by a real, live soda jerk and poured from the glistening, frosted aluminum tumbler of a laboring Cecilware blender. Summer at the shore.

One of the (many) great things about a malted milk is than anyone can make one, and you hardly need a recipe. But a true fifties chocolate malted wants whole milk (about a cup), full-strength ice cream (try two generous scoops – don’t lose your nerve), several robust squeezes of chocolate syrup and, of course, 2-3 tablespoons of malted milk  — season to taste.

For those adventuresome enough to “make mine vanilla,” vanilla syrup (Starbucks sells one) works best, but a dash of pure vanilla extract will also get the job done nicely. So: milk, ice cream, vanilla syrup, malted milk.

Chocolate, vanilla (or, if you insist, strawberry): throw it all in a blender*, fire it up, blend until cold and frothy, and prepare to be amazed.

.
*Author’s note: For the true aficionado, old time blenders are often available at flea markets and antique stores, and most have aluminum cups which tend to frost up enticingly as the malted blends. It’s fun to sample the full fifties experience, but be sure to check the wiring first. They’re good, but not worth-burning-your-house-down-good.

Lovely post. Any recommendations on the bested malted milk powder? I recently bought Carnation’s but it doesn’t seem to have the flavor I’m looking for.

Ah, that sounds so great while we’re still in the summer heat. Thanks for sharing.

What a lovely post!! I see where Andy gets his talent with words! I don’t think my kids have ever had a milkshake, let alone a malted, plenty of smoothies though. But this post reminded me that there is nothing like saddling up to the counter for a delicious homemade shake! Thanks!!!

ok, malted milk, where do I get it? Make it? Is it called something else too?
ps, I agree with Sandy, a perfect post.

yes, the memories of my grandparents’ luncheonette in the bronx in the late 50s, absolutely….. My only answer to everyone’s question is that it’s not malted milk powder but rather malt powder that we need to obtain to make the malted. I don’t believe it’s a milk product, but rather actual malt, just not sure what the form it is….. if anyone finds it, obviously we all want to know!!!!!

It’s actually malted milk powder, and most supermarkets have it. Here’s one made by King Arthur Flour, if you want to give it a shot: http://www.kingarthurflour.com/shop/items/malted-milk-powder-16-oz

Love this post! I don’t know if it’s possible to be nostalgic for a time that I didn’t even live through… but if it is, I am.

awww, nifty-neato! we have the same one on the far left… my husband has re-wired it and even had a new powdercoat put on.

what a great story, thank you.

This just sounded so……Andy. Great work, I loved it. As someone who feels so really has an ‘older soul’ I like to think I could relate.

Very entertaining post! My first job at 15 yrs old was at Baskin Robbins (a west coast ice cream chain) and we would get orders for “malted” milk shakes every so often. The malt was a pale brown powder we would scoop and pour into the milkshake. Thanks for bringing back the memories!

My husband is going to love this! He insists on a chocolate malt anywhere that sells them, so one from home would make his day.

Oh, I love this. I just drove through Bayhead last weekend, debating whether or not to venture onto the beach. It was always my favorite spot but it’s so heartbreaking now.

Your post, however, was a sign: it’s time to go back. And it’s time for a milkshake.

Google “milkshake maker” and you’ll find that Westbend and Hamilton Beach both still make these babies.

I love me a good malted shake. I will have the try the vanilla one mentioned last. great share.

Malted milkshakes are such a classic treat!

The malt really makes a difference.

I was born in ’55 but we had a drugstore with a “soda fountain” AND my grandparents had a restaurant from which we inherited a Hamilton Beach milkshake maker/blender WITH stainless steel cups. The blender lived in our basement and it was a special treat to be allowed to make a malted.

Thanks for the memories, Andy’s Dad!

Love this post! I can almost smell the ocean air and taste the cold malt. Just what I needed to read on this lazy afternoon during my toddlers nap. Thanks!

So evocative of summertime … what a great post. (And is that photo actually his blender collection? As my four year old would say, WOWZA!) Now to find a cold malt and a cute soda jerk to serve it up …

Loved this! Your Dad sounds like a treasure. He also reminds me so much of my Dad who made us many malted milk shakes growing up and french fries, especially when mom was away!
Great summer post!

Thank you for this lovely story! I can imagine being at the shore on a hot day and enjoying lots of frozen treats. Great writing.

A lovely post with memories of my favorite place, Bay Head. Where, specifically, was this shop, I wonder?

I have two vintage shake mixers, my Mom’s 1941 Hamilton Beach Model 30 with two mixer cups and an older Make-Rite Model 250 without its smaller mixing cup (can’t find one). Both run and look great – a testament to their “Made in U.S.A.” pride.