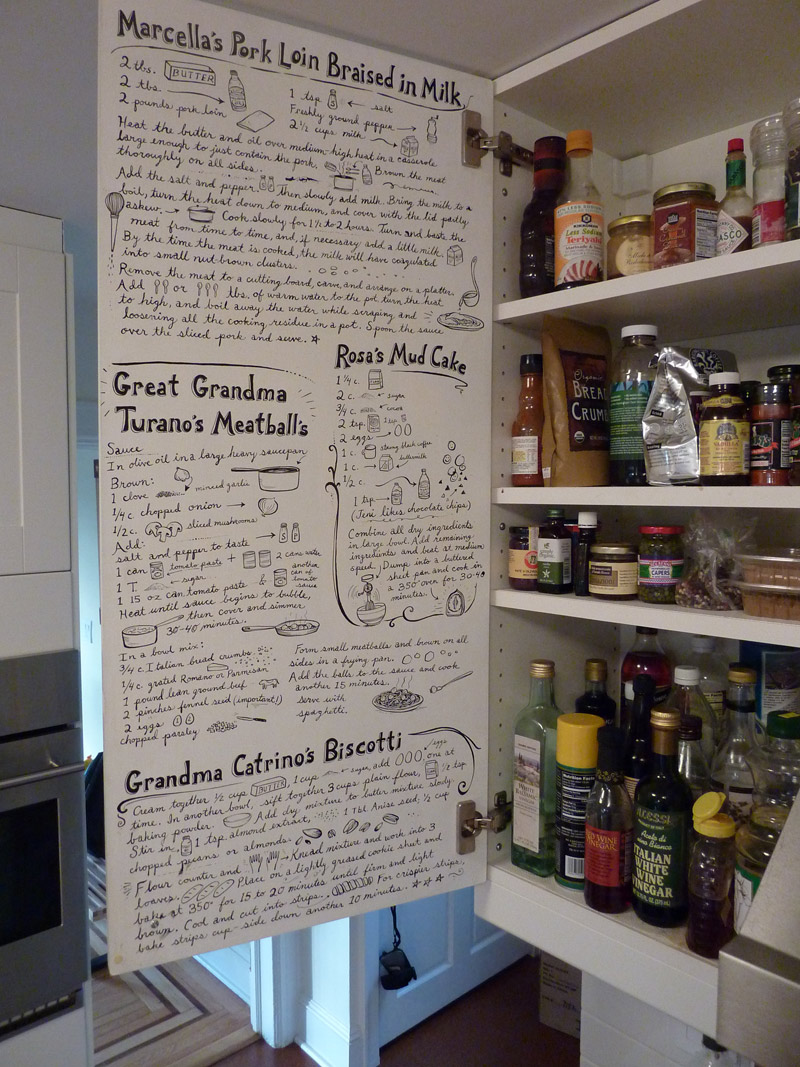 When we bought our house in 2003, the kitchen was terrible (think avocado counters, not of the charming retro variety), This was exciting to me for one reason: In a few years, when we could maybe afford to renovate, we could create the perfect family kitchen from scratch. Of course, as anyone who has lived through a renovation can attest, “perfect” means one thing to someone and another thing altogether to that someone’s spouse. (A story which deserves another post/Lifetime drama all its own.) But the idea to have an illustrator (the amazing Gina Triplett) paint recipes on the inside of an upper cabinet door was universally loved by all the decision-makers in the house, especially the kids. The only tricky part was figuring out which recipes were deserving of such an honor. Ultimately, to qualify for “cabinet door” treatment, we decided the recipe needed to be both steeped in family history and, of course, be delicious. The line-up: One recipe from each of our grandmothers  (Grandma Catrino’s biscotti, Great Grandma Turano’s meatballs)  “Rosa’s “mud cake , which my best friend’s mom served at every one of my best friend’s birthday parties when I was little, and Marcella Hazan’s milk-braised pork, which Aunt Patty made the first time I met my husband’s family in 1992. Now we have a private living memorial to those who have influenced me in the kitchen, and my kids will grow up with a certain reverence for these dishes. Guess that means I’m never moving. 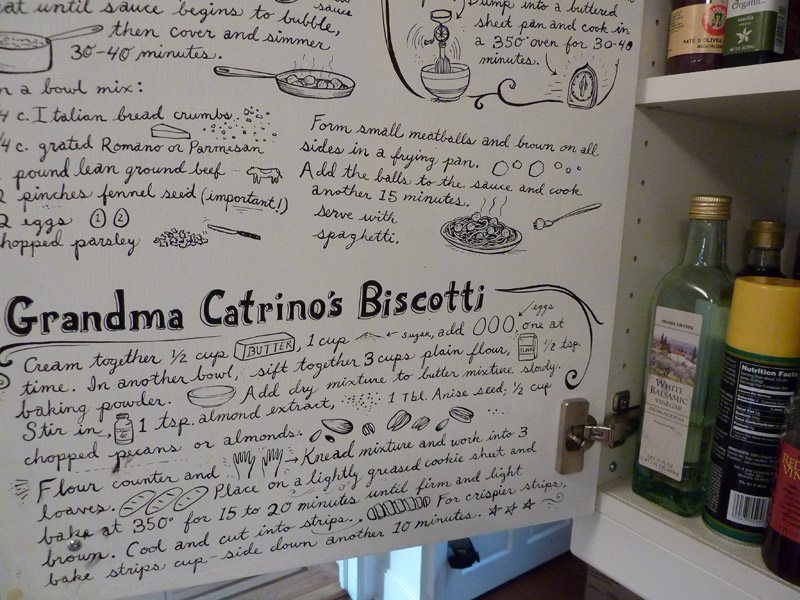 The How-To: Triplett started by giving the door a coat of paint similar to the outside color. (This allowed her to paint over any mistakes she made along the way.) She then sketched out the words in pencil and went over them using a superfine paintbrush dipped in black paint.

I’m in love with the cabinet door recipes. Beautiful, beautiful. Warms me heart. Oh, and I love your marble countertops! ~Liz

Hello Jenny,
I really hope you don’t mind if I shamelessly steal both this, and the chalk board decal! Wonderful, warm, charming…
Vanessa

Are you kidding? That’s the whole point. Steal away!

Dear Jenny, I love the Cabinet Door Recipes. So creative, and it really is a nice way to hand down those special recipes to your children. They will always remember and cherish that artwork in the kitchen and the food that goes with it. Love, Maryanne

This is the coolest idea ever! Wow. Well done, Gina, & the family who voted for it! : )

Love this! I have things taped inside, not painted, but the idea has got me thinking. Another idea… your commonly used cabinet (you know… the one by the phone…) could have important phone numbers illustrated, like the babysitter, emergency numbers, grandma/grandpa, etc. Dunno if my husband will go for it, but I’ll try. Thanks!

When I saw this I thought of my Mom! She always pasted her favorite recipes on the inside of her cabinets, she would cut out the recipe and then place it over a piece of decorative paper or doily and then paste it to the inside of the cabinet. It was decorative and utilitarian!

I’m in love with the cabinet door recipes I  found on  Dinner a Love Story site! This is the coolest idea

That is possibly the coolest kitchen renovation I have ever seen. Amazing. And the artist did a great job, too!

That is so way cool. I’ve never seen that before. On my doors I’d put my recipes for brownies, banana split cake and minestrone!

That’s beautiful enough (both the idea and the implementation) for the outside of the cabinets.

What a great idea to keep family heirlooms around for everyone to enjoy. I love seeing recipes out in the open.. i think it’d be neat to do this will a removable type marker on the outside so you could change them every so often. Very cool!
-Sylvia
Digital Kitchen Scale

conversion chart for measurements would be another great one perhaps?

Marcella is the coolest name for a female ever. /that is all

This is a wonderful idea! I’m going to keep this in mind if I re-do my kitchen… In my dining room I have pictures of my favorite dishes (one from each grandmother, one from my mom and one from my dad) and in the same frame a hand-written recipe for that dish by the person who made it. It’s a nice memory and fun conversation starter too 🙂

I absolutely love this idea, I was searching for wallpaper with recipes on it, or take a cookbook and paste the recipes to the wall, but this is much easier and beautiful.

That cabinet door looked familiar to me at first glance. The inside of the cabinet door to the right of my stove has recipe cards taped all over it. The recipes are all favorites I make over and over or conversions to larger size recipes to feed all my kids. Some of them are “Chili”, “Baked Beans”, “Chorizo & Rice”, “Toll House Cookies” and of course “Pancakes” . Maybe someday I’ll have them permanently copied. Great idea!