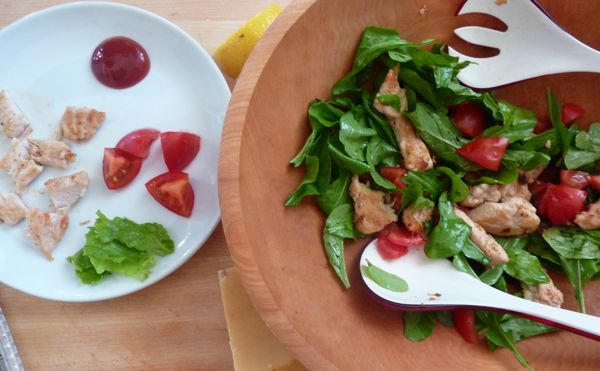 I have been trying to make this dinner since July 1993. I know that sounds ridiculous — chicken with arugula and tomatoes seems almost too basic to be named something let alone to have been stuck in my brain for that long, especially since my brain has seen stickier days. (I forgot to photocopy the immunization forms for camp, again!…Again!) The thing about this dish is that the first and only time I had ever eaten it happened to have been in Florence on my first and only trip to Italy. I shared it with Andy, who was studying art there for the (very hot) summer, and it was seminal in its simplicity. Not a single extraneous anything — just the highest quality chicken, arugula, and tomatoes and some sort of bright dressing that enhanced instead of distracted from the main event. Even though I was (am) half Italian, it was probably the first time the most fundamental rule of cooking hit me: The best shortcut in the kitchen is to start with ingredients that need no help from the cook.

Of course, I was 22 in 1993 — I had no real use for shortcuts in the kitchen. Fast forward seventeen Julys — it’s 93° at 6:30, I have two hungry kids and no plan for dinner. What I do have is a bag of beautiful, fresh arugula that instantly pulls up my Florentine epiphany. And 20 minutes later, I have dinner.

In a large skillet over medium-low heat, saute 1/2 medium onion (chopped) and 1 clove garlic (minced) in olive oil about 5 minutes. Turn heat to medium, add 2 boneless chicken breasts (cut into 1-inch pieces as shown) and cook through about 8-10 minutes. Meanwhile, clean one large bunch arugula and the freshest tomatoes (chopped) you can find, and toss with olive oil, a squeeze of lemon, salt and freshly ground pepper. Add chicken to salad and toss allowing arugula to wilt slightly.

Serve warm with freshly grated Parmesan. Deconstruct it for the kids and add a dollop of ketchup if you think it will make it an easier sell. (The Italians may not approve, but this Half-Italian one certainly does.)

We had this for dinner tonight and it was a big hit! Thanks!

I’m new here… stumbled across you via the NYT article. You’re my new favorite must-read daily treat, and I’m so glad I found you. I feel like I could invite your family over for whatever’s in the fridge… and we’d have a great time. Cheers to you for making a lot of folks’ days brighter, and their dinner tables happier and healthier! (Making this for dinner tonight – thanks for the simple yet lovely idea.)

I am not a blogger but love this site!

I am obsessed with arugula currently, and this dish was so yummy. The onions and garlic are a nice touch. I cheated a bit and used rotisserie chicken and just warmed it in the skillet. Fast, but so good! I’m new to your blog, but I will definitely be back!