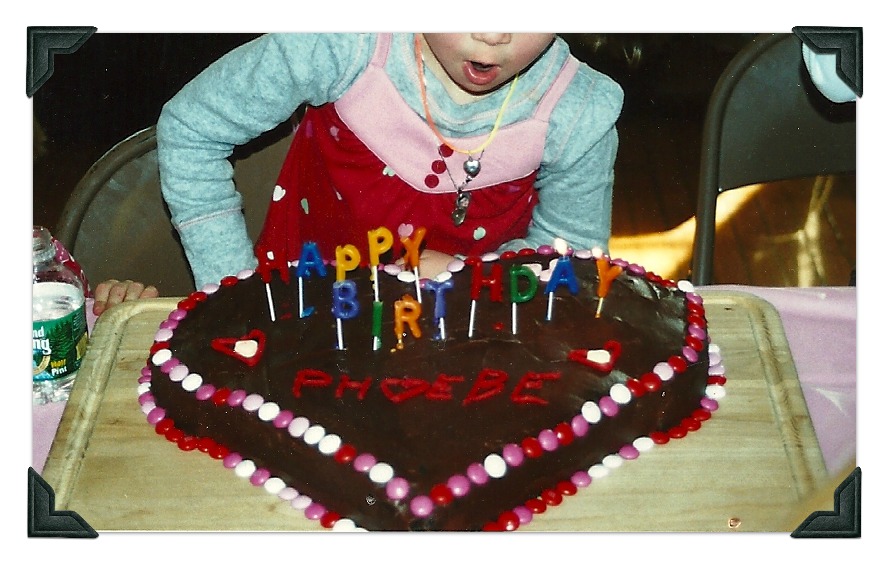 It’s been well documented on this site that whatever limited talent I have for say, spinning a lone onion into dinner, that this talent has somehow never translated to the baking side of my brain. The most recent evidence to support this being that cornbread I baked for our friends John and Shiv over the holidays — the one that was going to be served alongside Andy’s chili, until I tasted it and realized that I had forgotten the cornmeal. The sad thing is, it doesn’t mean I don’t like baking. I actually love it. I’m just no good at it.

But anyway, there was this cake I used to make Phoebe when she was little. Her birthday is right around Valentine’s Day so her parties were always heart-themed. For this particular birthday — held at a local dance studio — I planned the entire thing from my office at Real Simple, where I was working full-time. I booked the space, organized the pizza delivery, ordered various pink and red heart-shaped off-gassing plastic junk from the Evil but Life-Saving Oriental Trading. We liked to have birthday parties at home (or maybe I should say, we liked having parties at home after they were over) but it had been a crazy month. I was transitioning into a new role at the magazine, Andy was starting a new job, and Abby seemed to be sick the entire winter. It seemed absurd to take on a home party when outsourcing it at the local gym was going to save precious sanity reserves.

But I wanted something to be homemade — See: Birthday Parties and Maternal Self-Worth: Case Study 1 and Case Study 2 — and all that was left for me to do was the cake. I had it in my head that I would do something really fabulous — maybe in the shape of a shark or something because that was one thing about four-year-0ld Nemo-loving Phoebe…she knew her Sand Tigers from her Black Tips. But of course, it was the day before and I didn’t have any idea how to make a shark cake or anything fun for that matter. Or, at least fun in a way that was doable, given my limited chops. If I had thought ahead and bought a heart mold, I could just do a heart cake, I thought. But I hadn’t thought ahead and so instead found myself at the office googling “heart cake.” What came up was a sketch that looked a lot like this: 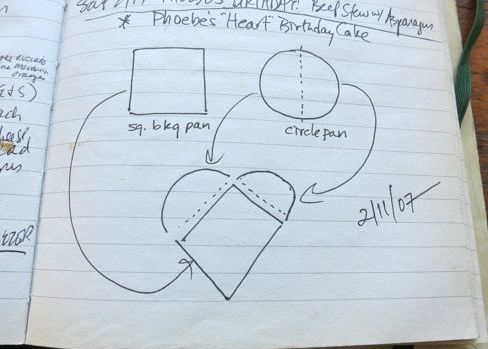 It turns out, if you have a standard 9-inch square baking pan (I did!) and a standard 9-inch circle baking pan (I had that, too!), you can very easily make a cake in the shape of a heart. You just slice the round one in half, and affix each of those halves to two adjacent sides of the square cake. Easy! Even for beginners. After baking (I used Rosa’s Mud Cake, naturally, but you can use your own favorite recipe) and frosting everything, Phoebe decided she wanted to stud the rim with pink and red M&Ms…so who was I to stop her? And nine years later, even though I’ve had plenty of time to order that mold, I still consider my jerry-rigged method the only way to make a real heart cake.

the only thing i made for my son’s birthday party was chocolate cupcakes. we ordered sandwiches and assigned salads and drinks to family members dying to contribute. i am of the school, “yes thank you, it would be great if you could bring X.”

My daughter is turning 1 around Valentine’s day, so I’m planning on doing a heart-shaped cake like this for her birthday. I’m not much of a cake-maker but this looks simple enough for me to handle!

I love birthday parties at home and baking! yet I agree – in the months that are crazy (i.e. just after having a baby) suddenly birthday parties out of the home seem like a much more intelligent idea…

Love the cake and happy (soon) birthday to Phoebe!

So adorable 🙂 Maybe I’ll try again at baking too!

I’ve seen this heart technique on Pinterest and have always wanted to try it….and PS, I could have written the same post- the reluctant baker post. Actually, digging into my foggy memory, I wrote this one that comes pretty close: http://feedmedearly.com/2013/07/21/the-dangerous-world-of-cookie-doodle/
Happy birthday to Phoebe…

And PS, hope the comment above didn’t sound horribly snotty in a been there done that kind of way! Not intentional, this was in fact the kick in the pants I needed to get this heart cake done once and for all.

Love that heart cake. Absolutely making that on valentines day.

As much as I do like to bake, I’m always dismayed when one of my kids requests a ‘funfetti’ cake mix (gasp!), covered with chocolate frosting and M&Ms for a birthday celebration… (your picture looks quite similar to my efforts). It’s all about creating great memories for them…right? And congrats on your 700th post! Love, love your blog.

Isn’t it weird the stuff we guilt ourselves about? The next time I host a kids’ party at home will be the first time. But I feel terrible serving leftovers for dinner.

Happy 700! Love the cake. And the fact that you were mellow enough to let her decorate it after you’d put so much effort into it. Zen Mommy.

What a great idea! I managed to wrangle an English muffin pizza into a heart-shape, without a mold: http://kidcaneat.blogspot.com/2014/01/sprouted-grain-pizza-valentines.html I suppose hearts are fairly easy to fudge. And the season is nigh!

Happy Blogday! I have a heart cake pan, but it’s very deep and can only be used for certain cakes. This idea is genius. Thanks

I think you mean a 9-inch diameter circle pan 🙂 Love the post, though, and have always loved the blog. What a delightful-looking cake, too!

Awe, what a cute cake! It’s perfect– you are a baking inspiration!

Oh Jenny, this picture made me smile so much! It is exactly what we often had for my dad’s birthday/valentine’s day. At some point, I remember my mother saying, you don’t need fancy pans, you can always figure out a way to decorate something out of a standard pan. My kids have yet to be disappointed, and my cupboards are grateful!