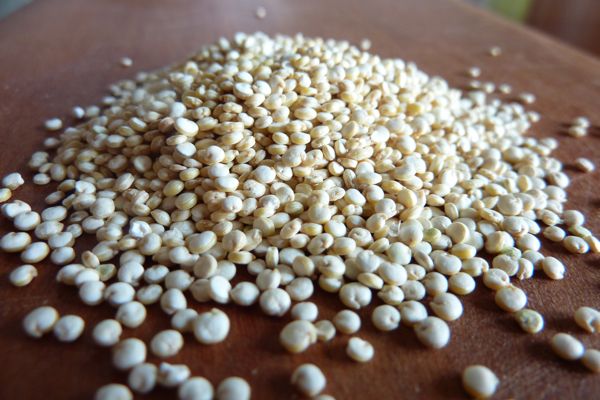 I’m sure you knew this one was coming — you’ve only seen the confetti-like pearly grains (that are technically not grains, but it’s just so weird to say confetti-like pearly chenopods) accessorizing my dinner plates for the last three months. All I have to say is this: Once you’ve tried quinoa, you will forever question your couscous and rice habit — well, I guess I can’t speak for you, but those were the two default starches on the dinner plate that I was raised with. Quinoa is a complete protein (which is why it’s so popular among vegetarians), it’s gluten-free (ditto parents of children with wheat allergies) and so freaking delicious (ditto people who like freaking delicious things).

You know that rule about how you have to put something new in front of the kids 25 times before they try it? Well, if that is indeed the case, we are about a month overdue for the under-four-feeters to swallow a solid forkful of quinoa. I’m not exaggerating — they’ve seen us spoon up a side of it pretty much every other night all spring long. 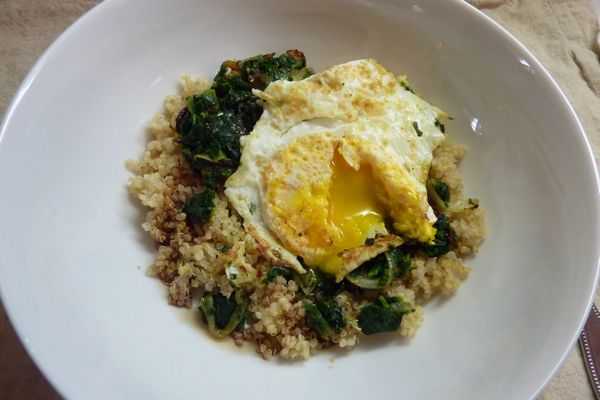 My friend and Time for Dinner co-author Pilar makes a vat of quinoa on Sunday so all week long it’s ready to be mixed into salads or heaped on her sons’ plates. (Supermom alert.) The few times I’ve followed her lead, this has been a boon for quick lunches, when I can toss in cooked vegetables (asparagus, broccoli), nuts (walnuts, slivered almonds), cheese (feta, goat) and dried fruit (cherries, pomegranates) with a basic vinaigrette.

But the dish above, Quinoa with Spinach and a Fried Egg, is the dish that really kicked my love for quinoa to Friday Night Lights-levels of obsession. It took less time to make this meal (that I would have paid $20 for in a restaurant) than to heat up a frozen Trader Joe’s pizza. And yes, it’s true that this comparison falls slightly flat since my kids will actually eat a Trader Joe’s pizza. But you might have better luck than me.

Bring 2 cups water to a boil in a medium saucepan. Add 1 cup of quinoa and simmer, covered, until tender, fluffy, and water is absorbed — about 15 minutes. Let stand, covered, off the heat for 5 minutes, then fluff with a fork. Yields about 4 cups cooked quinoa.

Prepare quinoa according to above instructions (or instructions on the package). Scoop a cup of quinoa into each of your two bowls. (Save whatever quinoa remains for salads later in the week.)

In a small frying pan over medium-low heat, saute 2 tablespoons chopped onion in olive oil and a dash of sesame oil for about 3 minutes. Add two generous handfuls of fresh spinach and sautee until wilted. Add 1 teaspoon of soy sauce. If you have kitchen scissors, use them to chop the spinach while it cooks.

Remove spinach from frying pan and place on top of quinoa. In the same frying pan over medium heat, fry two eggs over easy. Place them on top of the quinoa and spinach. Drizzle a little more soy sauce on top (not too much). If you want some heat, add a few drops of sriracha.

I haven’t tried it yet, but a friend found a recipe for quinoa meatballs, which her young ones ate right up. We’re vegetarians so was going to put the soy meat in the recipe instead. Your site is great and you’re doing a good service for moms all over the US who have picky little eaters. Keep it up! Even if that means eating out of season in necessary doses.

That looks awesome! I puffy-pink-heart quinoa and use it as much as possible. Thanks for the addition to my repertoire.

My current fave quinoa recipe is this one: http://megpug.blogspot.com/2008/01/quinoa-stuffed-peppers.html (the photos aren’t pretty, but the results are sooo tasty). I have about a 50/50 success rate getting my kids to eat it. It does have cheese so that helps!

So easy and batting 1000 with my kids: quinoa pesto. Make quinoa. Add pesto. Voila. My kids gobble it up.

Mmmmmmm….I am SO making this! Thanks for sharing the (easy!) recipe.

i mix it with maple syrup for breakfast and microwave it. maybe they’d fall for it as a sweet?

Yum!
I’ve had some luck getting my kids and others to eat quinoa when some dressing that includes sherry or red wine vinegar is involved.

Terrific work! This is the type of information that should be shared around the web. Shame on the search engines for not positioning this post higher!

Made this last night for me for dinner. Forgot the soy sauce but still very good and will definitely do it again. Having leftover quinoa with various add-ins for lunch today. Thanks!

My friend gave me a box of the Inca Red Quinoa. What is your favorite one? Are there different kinds to choose from or just Inca red and pearly white? Thanks for your help. I have been wanting to use it more often. I added the left overs to my home made, vegetable soup.

Maryanne — Tastewise I find them pretty similar. Texture-wise I feel like the red quinoa is a little shaggier, chewier. Thanks for writing in!!!

You’re right… an easy $20 for that meal. What a great idea to cook up a big batch for the week ahead. It seems so obvious and so easy… but it never crossed my mind! Thanks.

I’m so glad to hear that others have such a deep love for quinoa as well! I have my husband thinking I’m a little crazy over my love for quinoa. This recipe is on my menu list for dinner this week – thank you!

I made quinoa tonight for the first time and it is so delish! The two year old gobbled it up, my husband and I loved it… the 4 yo and 6 yo sneered at it like it was the worst thing they have ever seen! Will try and try again with those two because I am definitely making it again!

[…] Annie’s cheese pack into a big batch of the stuff and her kids call it Quack and Cheese. My kids still won’t eat quinoa (I feel it, though, they’re getting close) so I thought I’d do a halfway-house version […]

I made this! I started reading your blog when tomatoes were fresh at the summer farmer’s market, and this meal has been in the back of my mind since the first reading. And I made it! And it was awesome! And the leftovers were great for lunch! Thank you for helping me elevate the usual quick & easy (or frozen) dinners in my house!

Hang in there with getting your kids to eat wholesome, real food! It is true, you just have to keep giving it to them and insisting they take a few bites. You are training their taste buds. My kids will eat quinoa but weren’t crazy about the new red quinoa that I found at Trader Joe’s. But I served it again instead of rice under some chicken chile verde. Then my mom fixed it to go with Mediterranean Turkey Stew–we served the stew on a bed of red quinoa (almost hiding the quinoa). Then, my mother in law served it less than a week later with black beans and corn to go on top. By that time, they had gotten used to seeing it and forgotten they didn’t like it. It’s so funny, when my kids don’t like something new that I serve them, I tell them, “you can be sure you’ll see it again then.” Of course, they know that what I’ve fixed is what we’re having for dinner. They don’t have to eat it but won’t be eating anything else instead, won’t get a snack before the next meal, and definitely won’t be getting dessert (if it is served). My kids (11, 7, and 5) are fantastic, adventurous eaters and love ethnic foods. I think I served my youngest one salad probably 30 times before she ever took a whole bite. We eat lots of salads and now all three love salad.

My son has been eating quinoa mixed with fruit yogurt since he was about 9 months old. Easy and nutritious breakfast.

Read your recipe. Got introduced to quinoa and have passed it on to a friend of mine in South Carolina who has adopted special needs children and one of them has to have high protein. I am in Montana and our health food store has three different kinds. I have tried all three to date and love them all especially with real butter. I plan on trying your recipe with the spinach and egg as I am single, work late sometimes and that will make a wonderful quick light meal for when I get home………..thanks…..

I bought quinoa for the first time, but I bought the flakey version. I wanted to eat it as a breakfast meal with honey and fruit… it tasted okay. I guess I am not use to the taste yet, but this recipe looks easy and would be great for Friday-No-Meat Days.

Made this tonight and added Sriracha on top- blew my mind. Kids were underwhelmed with the no-spice version, as usual. I had seconds!

The first (and only) time I tried Quinoa, it had a bitter taste. I read that soaking it helps, but it didn’t for me.

QUOTE: A peaceful rest to the 1 who loves me on the other aspect.
Consider some quiet time each working day to pay attention to yourself, without judgment.
There is no assure of 100%twenty five precision with psychic skills.

My blog; Is LivePerson Legit? (Fawn)

Just made this with kale from my garden (thanks, Mama! BTW over here, they say that kale is so much better after the first frost and I tend to agree …), leftover Broccoli, green beans and sweetcorn. Yummy, and now I’m feeling soooooooooooooo virtuous ………..
Happy New Year
r